Our branch celebrated Pioneer Day today, even though it was yesterday. The Elder’s Quorum decided they wanted to have an activity for Pioneer Day, which meant that Andrew and Brent were in charge of planning the activity. Essentially this meant that plans were solidified on Thursday evening and food sign-ups were passed around in church yesterday morning.

Andrew was assigned to come up with some pioneer games for the children to play. He decided on stick pulling, three-legged races, and shadow tag. We had recently purchased several inexpensive scarves at Tarek’s and decided we’d use those to tie up legs since we had no idea where we’d find bandannas or anything else suitable for tying up legs. For the stick pulling, Andrew went out and purchased some broom sticks. You can buy broom sticks here for 50 cents a piece!

Shadow tag requires no equipment so we were well prepared for that game.

When Andrew and Rachel came home from running errands, Rachel picked up a broom stick and started experimenting. She quickly turned violent.

For as wild and crazy as she is, she’s still a girl at heart. I don’t know if you can hear it in the video, but she tells Andrew, “No getting me!” What a girly thing to do, all the while attacking him with all the energy she can muster. 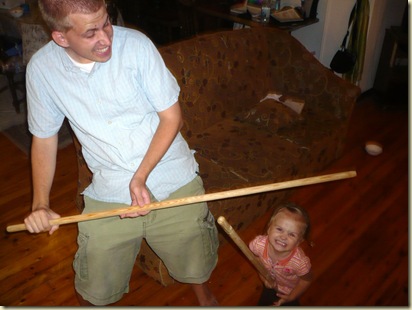 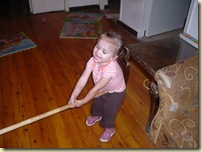 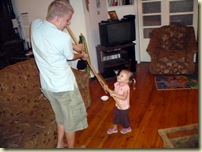 Later, after we dissolved the sword-fighting to preserve our dream of having more than two naturally born children, the broomstick turned into a horse and she galloped around the house shouting, “Giddy up! Giddy up! Giddy up!” I’m half-temped to make a little horse head to put on the end of one of those broomsticks… 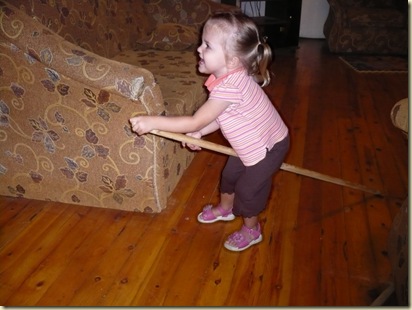 After filming Andrew and Rachel goof off, and after I botched the salad I was taking for the potluck, we loaded into the Cannon’s van and drove off through Cairo to get to Zamalek. We hadn’t been to the Tueller’s house since November; if you remember, Brother Tueller is the Deputy Chief of Mission, and is basically directly under the ambassador. When the ambassador is out of the country (like she is now), he becomes the acting ambassador, which is pretty cool. He lives in an awesome mansion of a house owned by the US government and we like to have parties there because, hey, why not?

Anyway, I hadn’t taken a car ride into downtown in so long since we always use the metro. It was neat to see how well I’ve come to recognize Cairo. I could point things out on Manial Island and downtown and in Zamalek, even. We’re seasoned Cairenes now, kind of.

Everyone was in the pool when we got there, so we hopped on in as well. The kids were having so much fun in the pool that they didn’t want to get out to play the games that Andrew had planned, not that he minded because he wanted to stay in the pool, too!

Rachel was a goof at first. She wrapped herself around my neck and every time I tried to pry her off she started screaming. I don’t know why it always takes her so long to warm up to the idea of swimming; she loves swimming. We finally got her off me and into a little inflatable toy that the Cammocks left behind. She relaxed a bit but was still rather nervous. 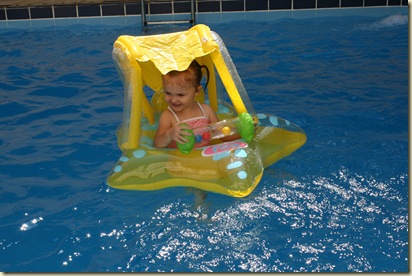 We even managed to get her to smile. 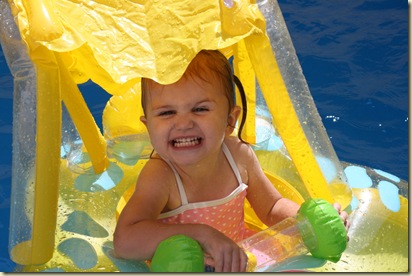 Want to know where she gets that cheesy grin? Her dad. 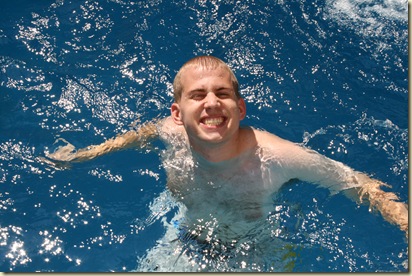 Andrew had fun toting her around the pool, creating tidal waves for her, and doing other crazy things with her. I was much more gentle. 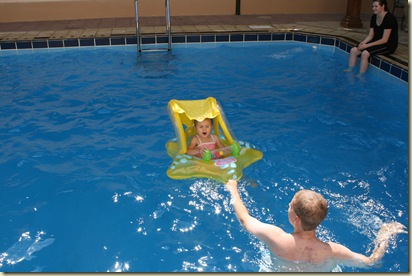 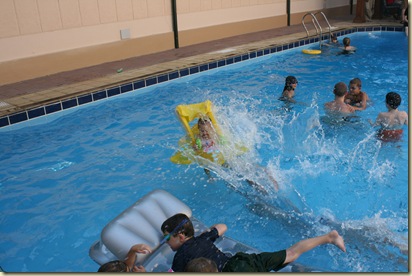 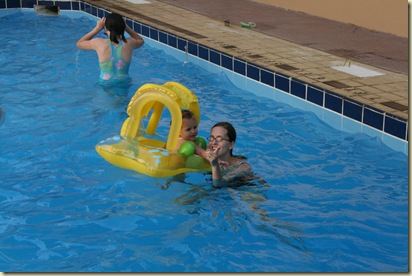 She was crying in that last picture with me because she wanted to “See Baby Sarah so bad!” So we took her out and got changed and let her play with Sarah. 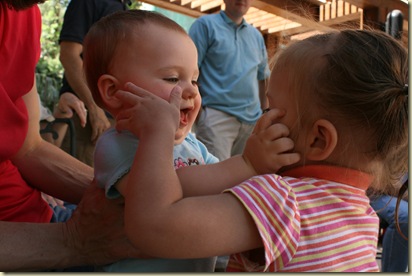 Two seconds later she almost jumped back into the pool with her clothes on, so we stripped her down, put her suit back on, and gave her to Rebekah (who is almost twelve) to play with. Rachel stopped being clingy and started having a blast. 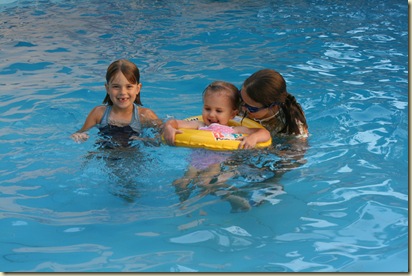 We supervised from the sidelines, sipping freshly-squeezed lemonade with fresh mint, flinging other people’s children into the pool, and encouraging questionable tricks to be attempted. Technically I did the sipping and supervising while Andrew did the encouraging and flinging. We believe in division of labour; it gets more things done. 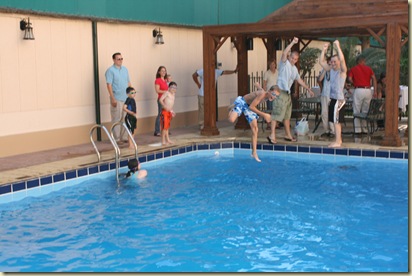 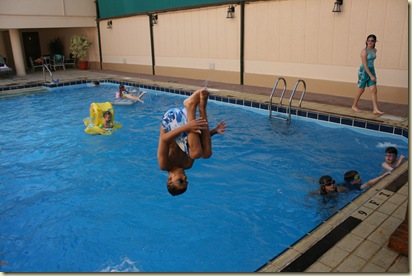 Rebekah put Rachel on an inflatable bed thing, which she enjoyed…until too many other children (ie: one) climbed on board and it flipped over making her fall off. Rachel blew bubbles, kicked her legs, and moved her arms, bringing her back up to the surface where Rebekah scooped her out, following Andrew’s harried directions of,

It took a minute for Rebekah to right herself after the flip over, let alone get Rachel out of the water, but Rachel didn’t seem to mind. She came up smiling. I was about ready to jump in, though the whole ordeal took less than 30 seconds, I’m sure. 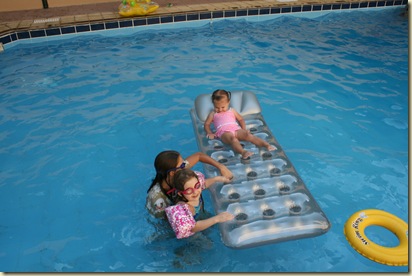 Then Rebekah passed Rachel off to Lissy and both Andrew and I decided we had better watch a little more closely, since Lissy is only eight. Not that all eight-year-olds are more irresponsible than twelve-year-olds…they’re just smaller. 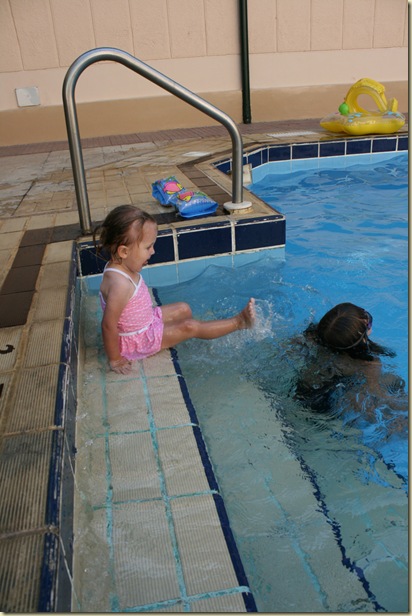 Elisabeth made the mistake of encouraging Rachel to jump to her from the side of the pool. 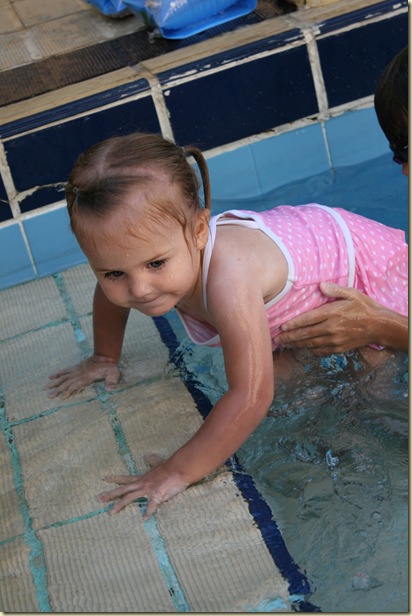 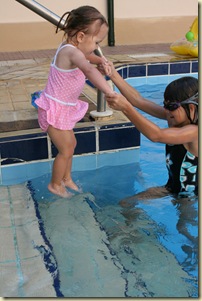 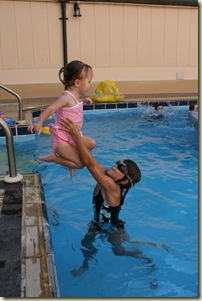 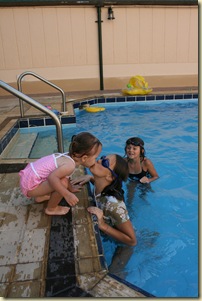 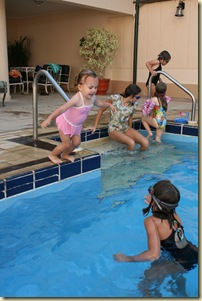 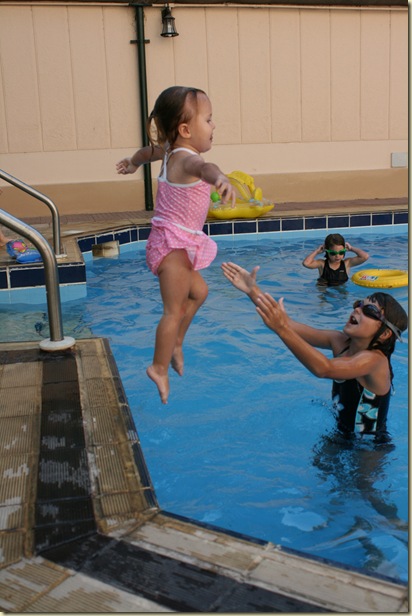 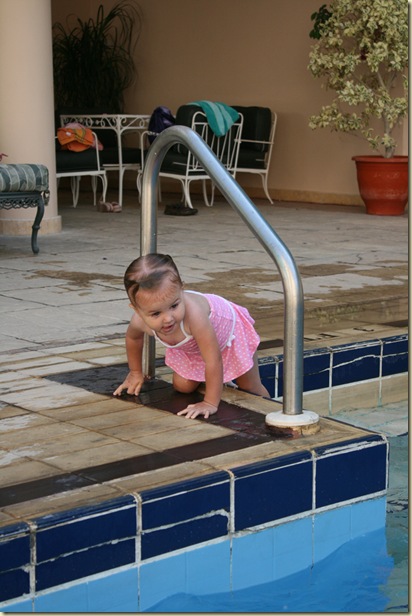 She was in and out of the pool for the rest of the time we were there. After Bekah and Lissy and Chloé had all taken turns and were plenty sick of catching her, I stripped back down, got into the pool, and took over. She must have jumped to me at least 100 times, which means she must have said, “Jump ‘gain!” three to seven times that number because that’s what she would chant while climbing out of the pool. I have no idea how many times she jumped to each of the other girls, but it came as no surprise to me when she fell asleep on the ride home.

It was a good, tiring Pioneer Day, even if we didn’t play any pioneer games.