If you asked my father-in-law to describe me in one word, he’d probably say hippie. Or awesome. But probably hippie.

Truthfully I think it stems from the fact that broccoli doesn’t make me balk. Or it could be our parenting style. Possibly a toss up between the two.

We do some weird parenting things, it’s true, but we don’t adhere strictly to any child-raising techniques. I’ve never read up on attachment parenting or the Ferber method or anything like that. And I know I’m not a granola mom because I still shave my armpits and I’m pretty sure that disqualifies me from ever holding that title.

We just do what feels right. It’s like using an AED—I’m happy, you’re happy, we’re all happy! Of course that “everybody’s happy” rule of thumb doesn’t apply for disciplinary action…nothing works in every situation, anyway.

I took a quiz online to see if I really was a granola mom (because online quizzes are totally accurate judges about things like this*), though, just in case they changed the rule about shaving armpits, and I scored in the “pretty crispy” range…I’ll explain a few things that we do that tip us over into the hippie side of things and earned me some high scores on that quiz.

I had Rachel with a spinal block. I hated it. So with Miriam’s birth I went natural, though in a hospital. For the next birth I’m seriously considering a water birth, at home, with a midwife because I think that would be a much better experience than being strapped to a table.…

Miriam sleeps with us. She’s much easier to sleep with than Rachel ever was—Rachel attempted co-sleeping, too, but we kicked her out of bed because she’s a horrible sleeper. Miriam’s an awesome sleeper. Plus we don’t have a mosquito net for her so she has to share ours which means she’s in our bed all night, every night.

I hold/wear my babies as much as possible. I do put them down every once in a while, but mostly I just hold them. Rachel reached the independent, put-me-down stage pretty fast. Miriam seems to be a cuddlier baby (as in she actually likes to be cradled in my arms instead of being held upright and facing out, which was Rachel’s preferred position) so she might last in the sling a little longer.

We use cloth diapers, prefolds and fancier ones (BumGenius). We aren’t against disposable diapers, it’s just that from an economical and ecological standpoint, cloth diapers make more sense to me. We have spent zero dollars to diaper Miriam so far—we were gifted a lot of disposable diapers, which we’re using because they make more sense from an indolent standpoint, but we don’t plan on purchasing any ourselves. (We also use reusable nursing pads.)

We also employ elimination communication. Rachel started when she was five months old and she’s been completely “trained” for over a year now—except that we’re still working on that nighttime thing. We wake her up in the middle of the night to “pee” her.** Miriam started as soon as I felt alive enough to hold her over the potty. Now our bathroom floor is littered with potties (because sharing the yellow potty was killing Rachel) but I haven’t changed a single stinky diaper in over two days…and I think that rocks. 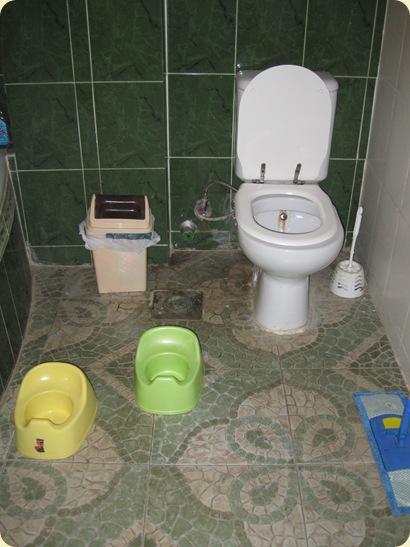 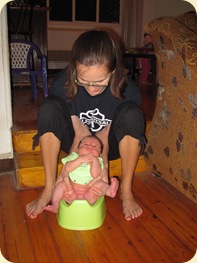 Communicating with a two-week-old is tricky but we have this little method worked out where she grunts and groans and passes gas while acting like she’s starving to death. Then I try to feed her but she won’t calm down and latch on so I try her on the potty and she either relaxes and goes…or she doesn’t. We still have a few kinks to work out. I can’t wait until she can start signing. Potty’s going to be her first word. Or “more.” I’m pretty sure Rachel signed “more” before she signed “potty.” For some reason she thought getting more food every time she made that sign was more exciting than being plopped on the potty.

We breastfeed. Rachel went for 19 months and she probably would have kept going if I hadn’t fallen pregnant. I’m not into the whole tandem-nursing—I don’t think it would be physically possible for me to consume enough calories to keep me, a fetus, and a baby alive—so we gave Rachel the boot in February. I tried to wean her in January around her 18-month birthday but it didn’t work out.

And I know I just said that I’m not into tandem-nursing because I wouldn’t be able to consume enough calories, but I’ve definitely thought of becoming a wet-nurse, or at least donating my milk to a milk bank. I’m an amazing milk machine, so amazing that I, personally,*** could be considered the solution to starvation in Africa. Half of me thinks it would be weird to nurse someone else’s child, but the other half of me—the engorged-to-tears half—thinks it sounds like a completely logical idea.