At the insistence of our driver, we started our day bright and early by checking out of our hotel and loading into the van by 8:00 AM. He drove us over to the Fort of Qaitbay in the maniac fashion of his and dropped us off by the ticket booth where we were informed we had to wait until 9:00 AM when the citadel opened.

We had wanted to wander around on the harbour for a while, anyway, so that’s what we did instead, much to the annoyance of our driver who seemed to want us to be on the go the entire day. 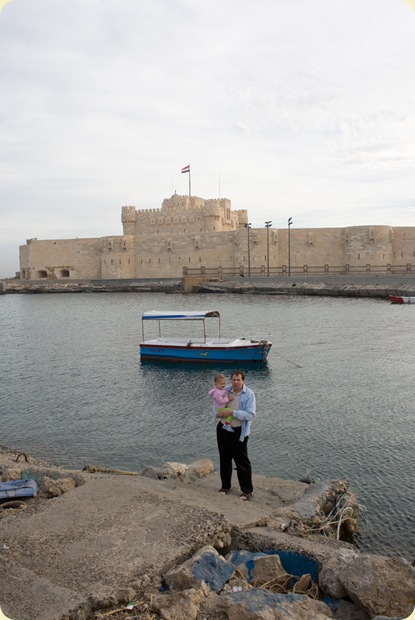 We all touched the Mediterranean Sea, just for the sake of touching it. It was surprisingly warm compared to the cool morning air—it almost made me want to take a dip to just get out of the wind for a while, but I didn’t because I didn’t have my swimsuit with me and because getting in means you have to get out and that would have made me even colder!

Instead we watched the vendors set up their makeshift booths. Most everything touristy for purchase in Egypt is the same—the same statues, the same cheap papyrus, the same magnets and key chains and mugs and scarves. In Alexandria, though, they also sell souvenirs of the sea—sea shells, bottles of sand, and, if you’re really lucky, hideously preserved puffer fish. 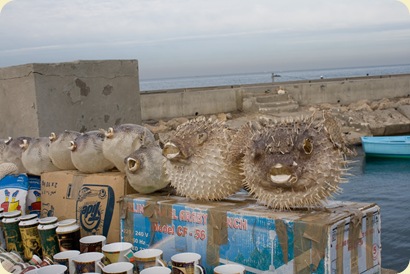 We were among the first patrons at the fort, which was nice because it meant that we could wander the halls and rooms without running into any crowds of tourists. We played in the courtyard for a while before entering the fortress itself. 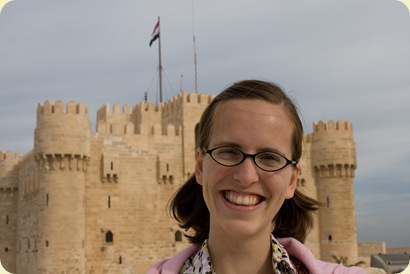 The first few chambers of the fortress were fascinating until we realized that they all looked the same. 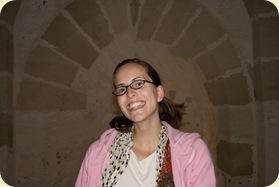 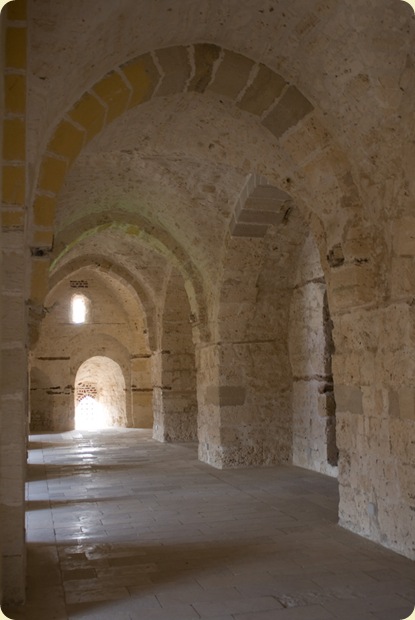 Then we ran around the castle playing some very silly games like hide-and-jump-out-to-scare-other-people, shooting cannons, and aliens (wherein Grandpa taught Rachel to make antennae out of her fingers and say “Take me to your leader”).

The highest room in the fortress had some magnificent windows with a great view, if you were brave enough to climb up and look outside. They were quite high up. 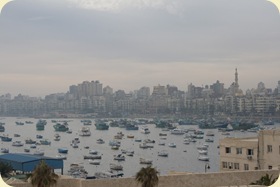 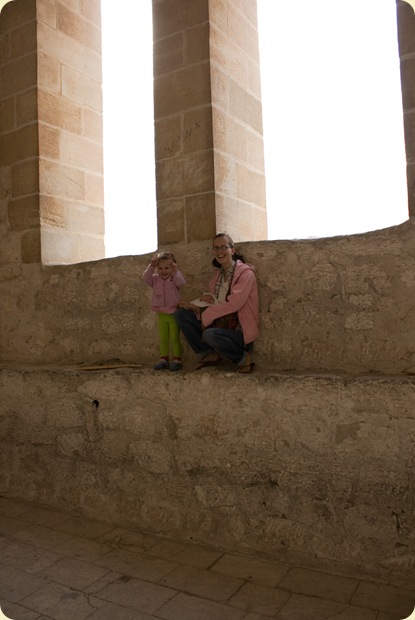 We had a lot of fun playing in the niches of the fortress walls, which is where we played a lot of alien games. 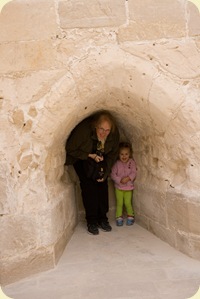 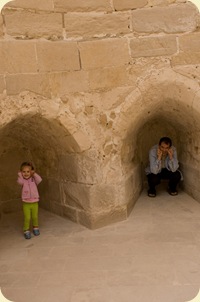 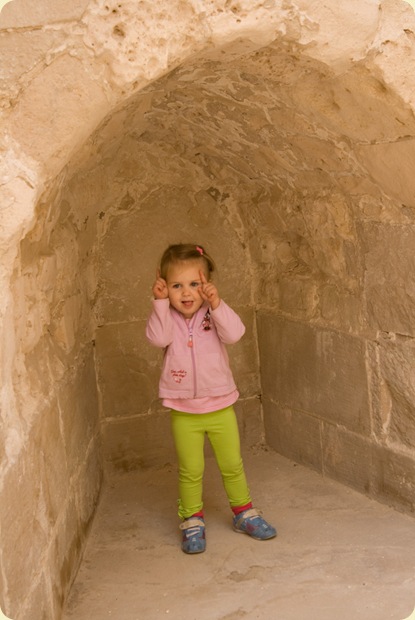 Then we went up on top of the fortress walls, which is where we shot our pretend cannons, and where Uncle Jacob got a little crazy jumping from wall to wall. 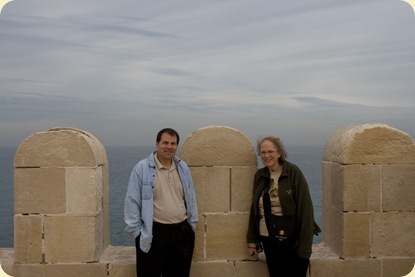 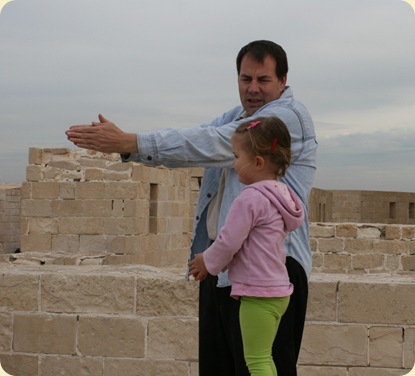 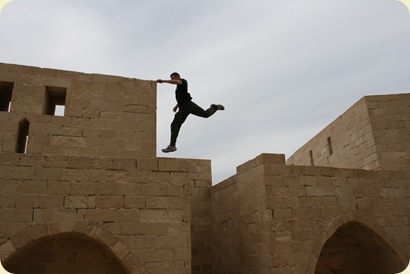 We hurried back to the van so our driver, who was a little impatient the whole trip, could hurtle through the city again at breakneck speeds to get us to the New Library of Alexandria, where we arrived at 10:20 and which didn’t open until 11:00. Good thing we rushed. 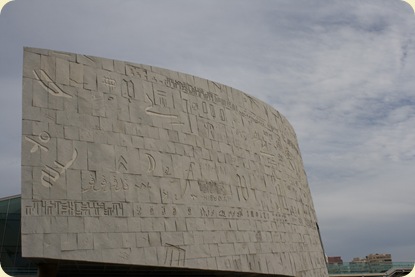 Because children under the age of six are not permitted to enter the library we had to go inside in shifts. Interestingly enough there is a “children’s library” section inside the library, but it is only for children ages six to eleven. They didn’t want to let us inside to look around but we talked our way in. It’s incredibly juvenile, decorated with Disney characters and things like that. It looked perfectly safe for a two-year-old or four-year-old, but that’s just me. It’s not like I’ve had any experience in libraries before…oh, wait….

Grandma and Grandpa stayed outside with the girls while Andrew, Jacob, and I went inside the library. We went into the main research library first where we kind of split up and then met, quite happily, back on the main floor. 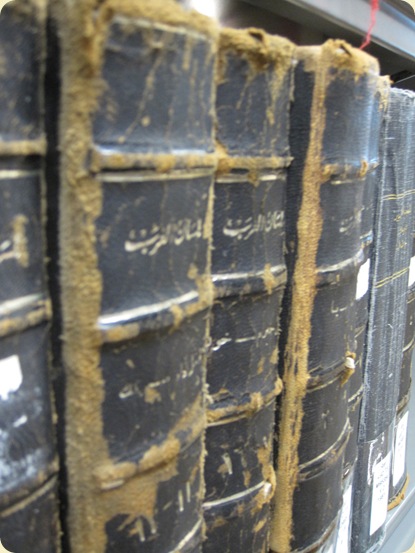 “I found the language books!” I crooned.

“What is this, like, a research library or something?” Jacob groaned.

We later took him to the YA library where he went into a science-fiction-induced stupor.

Before I went inside the library I wasn’t sure that I was missing anything special, but it really is a pretty cool library. There are statues on every level and a big display of printing presses on the main level. 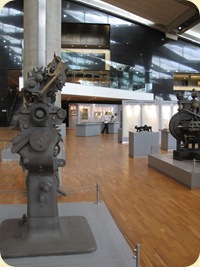 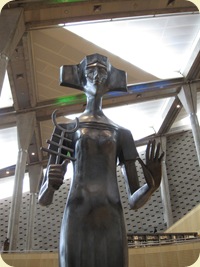 The overall design and layout of the library is quite stunning, too. 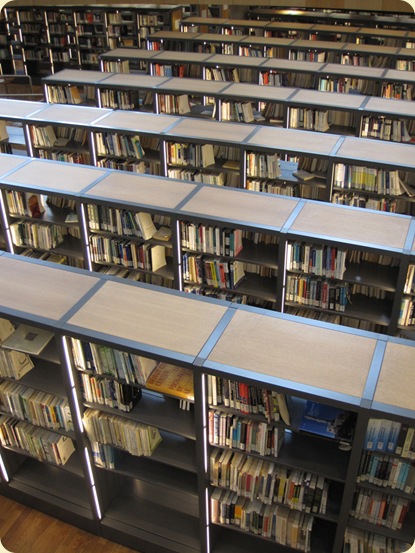 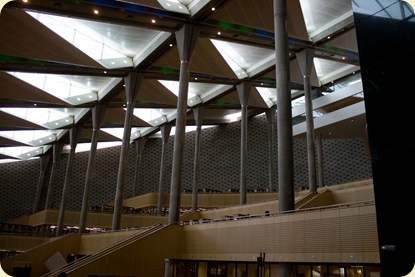 Andrew’s favorite part, though, was the room housing a copy of the Internet Archive, which runs the Wayback Machine. That and the Espresso Book Machine. He completely nerded-out on us. 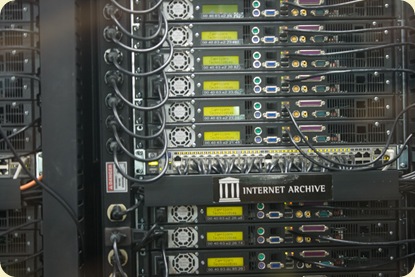 While we were inside enjoying ourselves, Karen, Reid, Rachel, and Miriam were bracing themselves against the cold sea air (it was rather windy) and inventing games using the tiles of the sidewalk. There are only so many games to be invented, though, before you exhaust your creativity cells, so they were all pretty worn out by the time we got back out of the library. Except for Rachel. She was bored. And Miriam. She was starving.

Andrew went back inside the library with Karen and Reid while Jacob and I watched the girls. Jacob took Rachel on a little walk while I nursed Miriam and he came back with very good news. He had found a little play area with slides and ride-on toys and a clubhouse outside, and a coloring table, lego, and other toys inside. To get in you have to show a library ticket, register the child by name, and leave a responsible adult with said child.

So while it still wouldn’t have allowed us all to go inside together, it sure beat walking around in circles on the sidewalk!

After the library we went to the Catacombs of Kom el Shoqafa, which were discovered when a donkey broke through the ground and fell inside. They are quite impressive, almost Petra-like, being carved directly into the stone. The statues inside were quite funny to see—Roman-style dress in Egyptian-posture or vise versa.

Unfortunately they wouldn’t allow cameras or Miriam inside, so we don’t have any pictures and again had to go inside in shifts. Somehow that makes everything take twice as long! 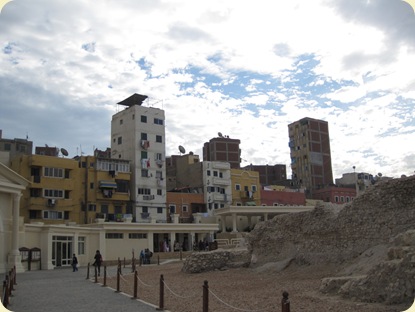 Our last stop before leaving Alexandria was Pompei’s Pillar.

Now, again, I must say that I didn’t think it was going to be anything impressive. A solitary pillar surrounded by ruins? How exciting could that be? I’ve seen pillars. I’ve seen ruins. Meh.

Truthfully, though, it was quite stunning. 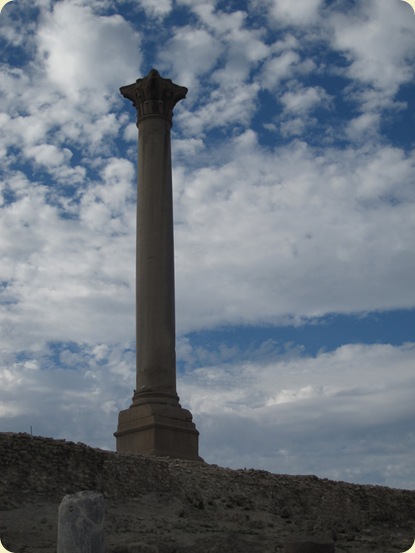 I don’t know if, at 33 meters, it was the height that was so impressive, or if it seemed monumental simply because it had us looking up at the sky. We certainly don’t have skies like this in Cairo! 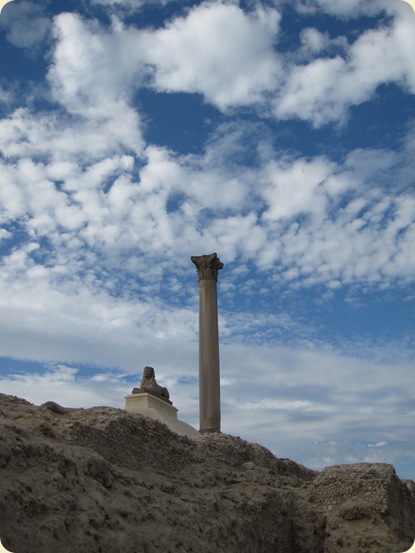 Andrew wanted to take pictures of us right by the pillar, but it was difficult to fit us in the frame when we were standing right by the pillar…so he got down on the ground. When he asked my to climb up, I told him that he’d have to hold Miriam for me. He kindly obliged. 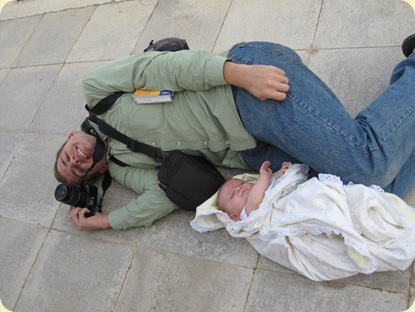 It was a pretty cool shot, though, I guess. 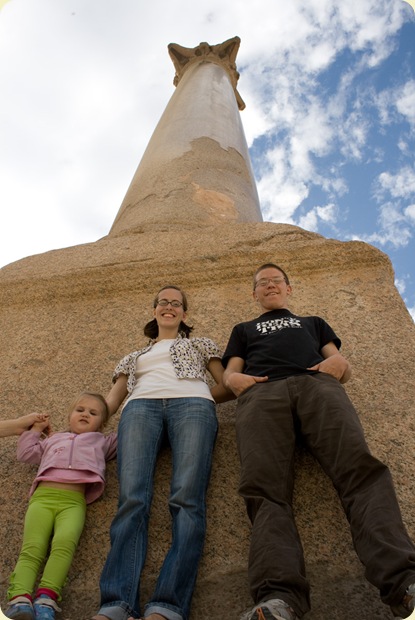 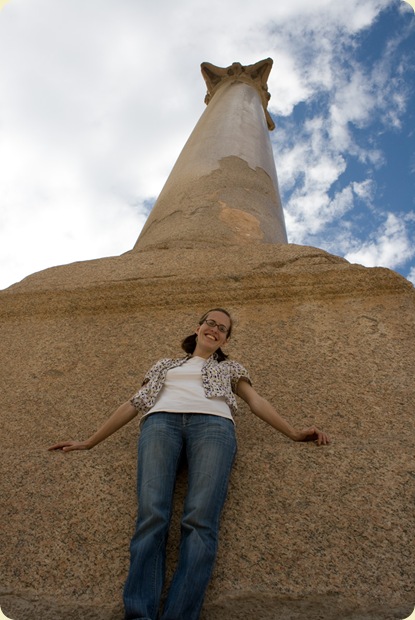 Grandpa (aka Bumpa) and Grandma spent the majority of their time chasing Rachel. Oddly enough they still look like they’re enjoying themselves instead of looking completely exhausted (which is how I feel/look after I chase Rachel around all day). 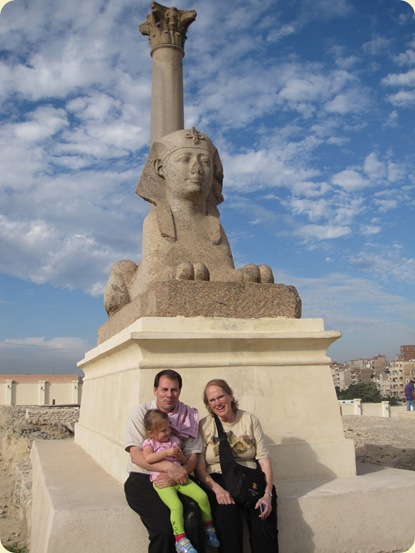 Alexandria is a rather European-influenced city. The architecture, both ancient and modern, differ from Cairo and, overall, the city is far more artsy. It could almost have you believing you were somewhere more European other than Egypt. Almost. But to remind us where we really were on the drive home, we not only had the endless desert, we had a pickup truck full of camels pull up next to us at the gas station. 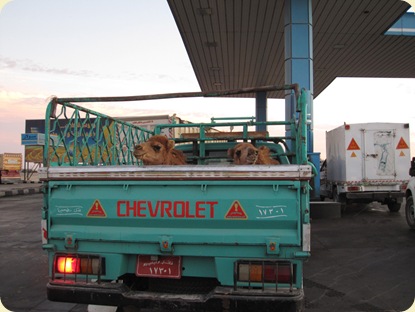 When I moved to Alberta I thought it was strange to see horse trailers and cattle cars on the highway and at gas stations. That’s nothing compared to seeing a man in a gallabia gassing up his pickup, loaded up with a good-looking pair of camels. 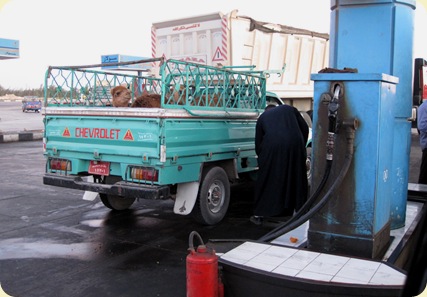