This was a day of nothingness for me. The past few weeks had been all too exhausting and had taken their toll on Miriam and me, so when we were getting ready to hit the town Karen suggested,

“You can just stay home and sleep. We’ll take Rachel.”

Mother-in-laws are full of such good ideas.

So while Andrew took his family to the Citadel, I stayed home and relaxed with Miriam. I frankly don’t recall what Miriam and I did, but it was sure to have involved a whole lot of nursing and sleeping.

From what I hear everyone had a good time at the Citadel, even though Karen had a run-in with the modesty-police, who for some odd reason insisted that she cover her head with a scarf even though the Mosque of Mohammed Ali typically doesn’t enforce veiling for women and no other female tourists were veiled.

We refer to this as arbitrary enforcement of arbitrary rules.

It isn’t really a rule, so doesn’t need to be enforced but since it was being enforced it magically became a rule (for one person). Andrew said she did it for the hope of getting a tip, which she didn’t.

Still, they seemed to have a good time. 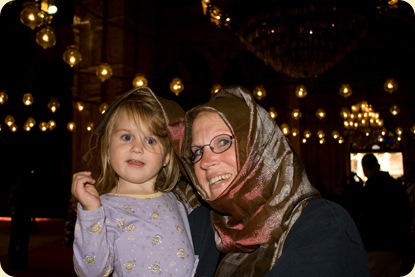 To celebrate the New Year we let off some party poppers and watched Harry Potter and the Half-Blood Prince. We had to pause halfway through to ring in the New Year and to write a quick “rabbit, rabbit, rabbit” to James.

It’s a silly and simple, but wondrously fun and long-running, game started by the Gillespie family, which means that it naturally spilled over into the Heiss family. How it works is this: The first person to say “Rabbit, rabbit, rabbit!'” on the first day of the month wins.

I think the only person who truly cares about it is James and he might not even care about it anymore but since everyone always tries to beat him to it the game continues.

Earlier in the day our upstairs neighbour had gone around to “apologize in advance” for the noise and to “invite” us to his party if we happened to not have plans for the New Year.

At around 10:30 we were remarking to each other about how quiet his party was. We hadn’t heard any noise upstairs or in the stairwell.

But later, at 11:45 PM, we heard tremendous clamor in the corridor and then at 12:00 AM they let loose and partied hearty until around 4:00 AM—quite the shock for us naive little Mormons whose parties nearly always end at midnight or shortly thereafter. The music was so loud that we could have had a dance party in our apartment (and probably in the apartment building next-door).

Miraculously both Miriam and Rachel managed to sleep through the racket. Unfortunately, I don’t think that was the case for the rest of us. Still, we had a nice, peaceful evening up to that point and woke up ready to tackle 2010.