This morning Rachel was helping to entertain Miriam on the potty. She was kissing her head, making funny faces, and talking baby talk to her. Then she looked up at me and said,

“Mom, do you know what? Miriam is best friends with me!”

She has been a great help while Andrew’s been gone—I wasn’t so sure that she would be and was rather scared to bid my husband farewell for a week, but the girls have both been great so far. Rachel really understands that having Daddy be gone is hard on everyone, so she’s trying her hardest to behave and make sure I’m happy.

“Does that make you happy, Momma?” she’ll ask after she cleans up her toys or takes her dishes to the sink or shakes a rattle for Miriam.

Perhaps I’ve been a little too mopey with Andrew gone. We read a story in the hardcopy, new-to-us May 2009 issue of The Friend today. It’s a little out-dated, but we’re happy to have a copy in our hands whenever we can get one. Inside there is a story called The May Queen. While I was reading it I started crying and I couldn’t figure out why until Rachel said,

I suppose it was because, as touching as the story was, it shouldn’t have made me bawl. The next story had the same effect.

*Tsk, tsk* said Rachel, “There’s no daddy in this story, either!”

She hopped off my lap to grab a different story. She can be so sweet.

I say “can be” because tonight before she would brush her teeth I had to drag her off to time-out, promising terrible consequences all the way (like “You’ll have to go straight to bed without story time, too, if you don’t stop screaming and just brush your teeth!” and “Honestly, if I waste all my energy fighting with you I won’t be able to sing any lullabies!”) until she screeched, “Stop, stop! I want to brush my teeth now! I’ll do it, Mommy! I want to!”

That’s the effect timeout is supposed to have, right? I’m getting weary of fighting her over every.little.thing. When she’s actually trying to help make our home a happy place it is very noticeable.

Then there’s Miriam. She is Wonder Baby, the kind of baby every mother dreams of having.

Miriam is a much easier baby than Rachel ever was. Words people used to describe Rachel as a baby were things like energetic, alert, active. And, trust me, she was (and is) all those things. Sweet and spunky. Words people use to describe Miriam are peaceful, calm, content. And while she likes to play and kick her chubby little legs, she is definitely all those things, too. Sweet and serene.

This morning we were all playing in the “play area” when Rachel jumped up to use the potty. I ran off to go help her, leaving Miriam on the floor on her tummy. When I came back I found that she had rolled over and right off her blanket—she was actually face to face with the shelf, trying to get a good latch, but when she saw me she flipped from her side to her back to look up at me. 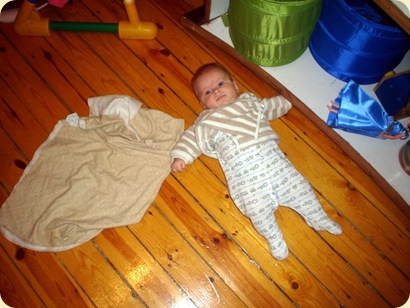 That’s all I’ve ever seen her do—flip to and from her sides. One day soon I’m sure I’ll see the whole roll! She’s been doing it for a while already so it’s only a matter of time. 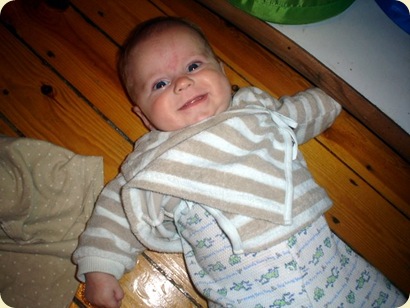 Rachel wanted to have a “pop-porn party” tonight since it was still the weekend. (I love her assimilations: pop-porn, tebby bear, sip up.) Anyway, I told her that we could, so after dinner we made some popcorn and then put on The Jungle Book, which she had never seen before. She was really excited about all the animals. Miriam was happily nursing away while Rachel and I munched on popcorn until Baloo broke out in The Bare Necessities. Then she quickly delatched and craned her head back so that she could see the television. She bounced her head around with the music, smiling, and cooing. She did the same thing for I Wan’na Be Like You.

Rachel loved those songs, too, and when the movie was over she insisted that I put Miriam down and dance around with her to the soundtrack of the movie.* It’s no wonder the movie is a classic when the songs are that lovable.

At the end of the movie when Baloo and Bagheera are singing and dancing to the reprise of The Bare Necessities, Rachel laughed until she cried.

When she had recovered from her fit of laughter I told her that the “tiger-lion-guy” is actually called a panther.

We’ve been having great girl-time together, but certainly can’t wait for our Daddy to come home!

I shouldn’t complain, though, I’m being kept very busy. Yesterday, for example, was district conference and I hardly saw either of the girls all day. Rachel sat on Nacia’s lap during the two-hour meeting and then we had a linger-longer after church and Rachel was off with all kinds of kids while Miriam was passed around the grown-ups. Then I went over to the Lawrences with the YSAs and the Williamsons and Davies—some young married couples in our branch. Rachel escaped off to Cloe’s bedroom and the two of them played for four hours straight while Miriam got passed around and I played games with everyone. The only work I did was help Francoise, Simmone, and Jaehee make dinner for all the YSAs—it took all four of us to make Kraft Dinner. How sad is that?

*Whoever thought of the Disney FastPlay was a genius—sometimes it is just nice to have the entire disk play without having to sort through the menu. It also means that sometimes the soundtrack comes on right after the movie is over so that you can have impromptu dance parties with your two-year-old.
Posted by Nancy at 4:41 PM