I debated long and hard about which ward I should attend for church this morning. Rome 2 is technically the official ward for tourists and is by far the closest to my hostel, but I spent the majority of my mission (13 months) in Rome 3, further out in the poorer outskirts of the city. Rome 2 = sleep in and take a quick bus ride to church. Rome 3 = wake up early and take the long train ride up Via Casilina. Amazingly, I opted for Rome 3—seeing old friends outweighed sleep.

I had forgotten how completely dead Rome is on Sunday mornings. Buses and trains still operate, but on a very restricted schedule. There’s no traffic; there are no people outside. Despite the deadness of the city and sporadicalness of the public transportation, I miraculously made it to church on time.

Upon walking into Elder’s Quorum, I was accosted by the missionaries, who all asked if I needed translation. Tourists never go to Rome 3. Ever. They were shocked to see me, and even more surprised when I declined their offers for translation.

Rome 3 has sacrament meeting last, which means the ward slowly trickles in during Priesthood/Relief Society and Sunday School. There were probably 3–4 people in Elder’s Quorum. Sad.

Sunday School was more lively (and more populated)—much more lively. The lesson on the Fall devolved into an hour long argument about whether or not it was all Eve’s fault. It was a classic rerun of countless Sunday discussions from my mission. As a missionary I sometimes dreaded bringing investigators to church because of these more ethereal (and rather heated) discussions. This time, though, as more of an outsider, I just sat and smiled. Fun times. :)

Sacrament meeting went along swimmingly and after the meetings I was able to visit with many of my old friends. It had been 5–6 years since I had served in Rome 3, but most of members remembered me. It was fantastic to see that many of the people I had worked with so closely were still very much active and continuing to build up the church in Rome. After some visiting, a Nigerian member gave me a ride to the nearest train stop, and after a quick lunch at a nearby restaurant, I headed back home to the hostel.

I had no desire to hang around the hostel all afternoon and evening, so I turned to Google to see if anything exciting was happening. I found a free Bach organ concert at a church downtown that started at 6 PM. It was only 2:00, 4 hours before the concert, but I went out anyway, figuring I could walk around and see old churches before the concert. Armed with the audiobook of The Brothers Karamazov on my iPod, I went out in the bitter Roman cold.

I walked all around downtown Rome, passing by the Trevi Fountain and the Pantheon. I even discreetly threw a coin into the fountain, guaranteeing my return someday (it’s worked every time so far…). 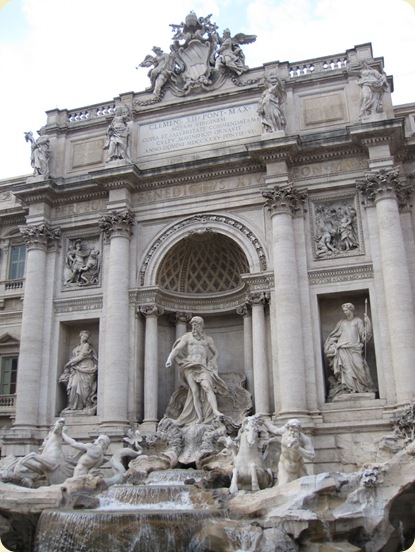 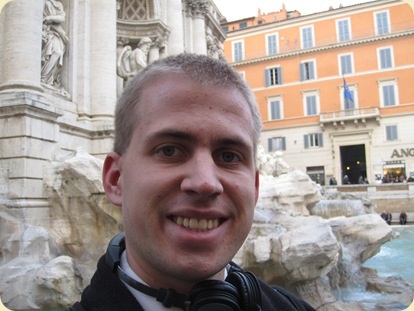 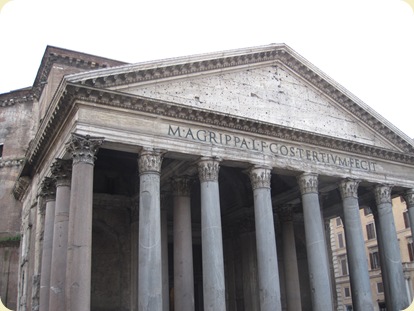 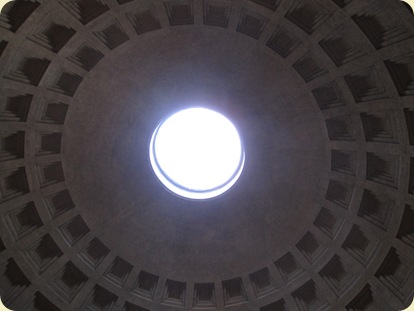 Like Piazza del Popolo, the piazza in front of the Pantheon features an obelisk: another one built by Ramses II in Heliopolis. I remember noticing all these obelisks when I was here years ago, and now they’re even more fascinating, considering I live basically where they came from. 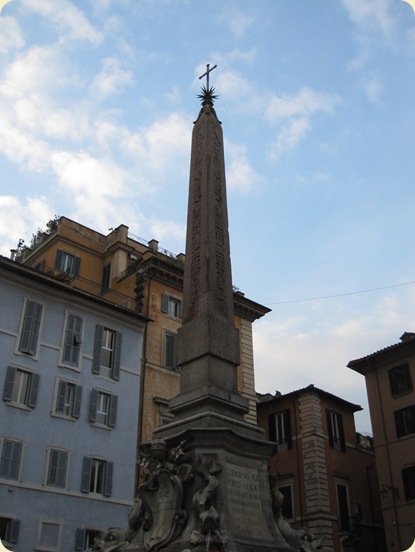 I then walked to Piazza Navona, which has yet another obelisk—this time merely a Roman copy rather than a pilfered Egyptian one. I pulled over to the church of Sant’Agnese in Agone to warm up a little before heading back out to the piazza to sit and people watch. 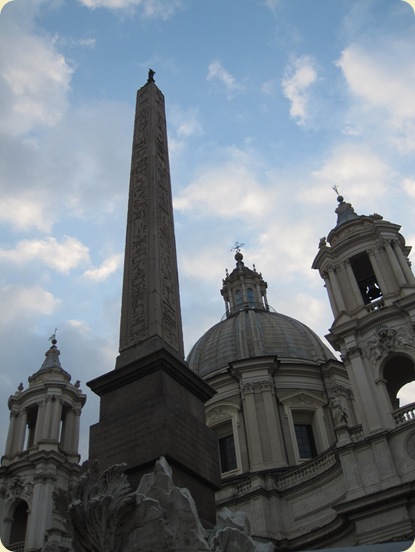 There were dozens of kids dressed up in costumes running around the piazza, swordfighting, dancing, and shooting confetti at each other. Italy celebrates several carnevali during the winter, though most don’t actually happen until February. I guess these kids were just really anxious to don their costumes and run around the city. 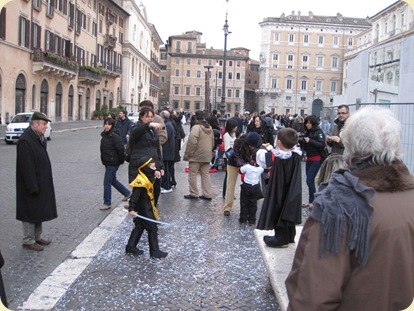 It was only 3:30—2.5 hours before the concert—and I was frozen to death. I decided to find where the concert would be held, the church of Sant’Antonio dei Portoghesi, and just chill inside the church until the concert.

I was warmly welcomed by the head priest and invited to sit down. After chatting with the priest, he excused himself and ran off. I put on my headphones and resumed Karamazov, admiring the huge organ and beautiful church. 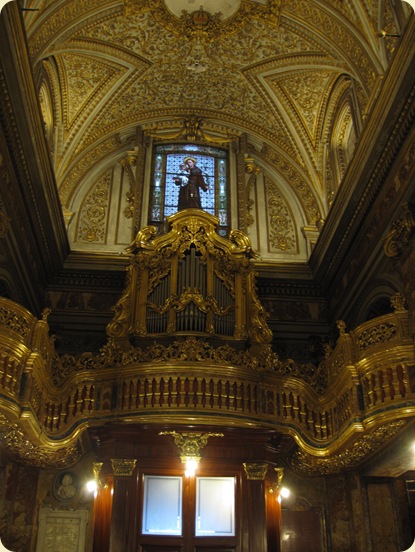 Suddenly, out of nowhere, the organ loudly came to life with some fantastic organ music. I was confused—it was only 4, far too early for the concert. Was the organist just practicing? If so, it sounded nothing like the advertised Bach music… The church started filling up and I felt lucky to have gotten there so early. If the church was this full two hours before the concert, it must be a really good organist.

In the middle of the performance a bell started ringing. I turned around and faced the front of the church (the organ was in the back) and saw a line of six priests walk in and take their places in the apse. The organ then stopped, the audience stood up, and the main priest (the one I was talking to earlier), began to speak.

It wasn’t a concert. It was mass. In Portuguese.

True to the church’s name, the church of Sant’Antonio dei Portoghesi is the main church for the Portuguese, Brazilian, and Angolan communities in Rome. The “audience” was a large lusophone congregation who had come for church, not for a free concert.

I decided to stick around for the entire service, even though I only understood a modicum of what was going on. While Italian and Portuguese are both romance languages, and while I can understand a lot of Spanish (at least religious Spanish), Portuguese has way too many “/ʃ/”s and “ão”s. It was still fun, though, and the linguist in me had a blast.

Mass was over by 5 and most of the congregation went home. Those that stayed started setting up for the concert, rotating the organ console, setting up chairs, and passing out programs. By 5:15 the church was packed, this time with italophone concertgoers. I felt vindicated with my super early arrival—since I had already been there for more than an hour I had a fantastic aisle seat. People were seated on folding chairs in all the side chapels and in the apse and transepts, and despite all the extra chairs, dozens were left standing.

The concert started punctually at 6. The church’s organist, Giampaolo Di Rosa, who’s apparently well known in European organ circles, played Bach’s entire Orgelbüchlein (Little Organ Book), which contains 46 chorale pieces meant to span an entire liturgical year. The concert lasted nearly an hour and a half, but the music and the setting were gorgeous.

After the concert, I went back out to the cold and walked up towards the nearest metro station at Piazza del Popolo. On the way I realized I was starving, so I pulled over to a gourmet pizzeria and ate the most delicious pizza of my trip so far—a diavolina (cheese pizza with spicy salami on top). Glorious. Why can’t this kind of food exist everywhere in the world? Why is Egyptian food so disappointing?