We have been called on the carpet by more than one relative for favoritism. It’s not our fault, precisely; it’s just that we’ve been blessed with a calm, quiet baby who loves to sleep. So she doesn’t exactly do much yet. So there isn’t much to report.

She rolled over this morning, for the second time in her life. Again, I don’t think she was aiming to roll over, necessarily, but she was sucking her hands so vigorously and they kept moving away from her face so she’d chase after them and before she knew it she was on her side, but those pesky hands kept moving up toward her forehead so she chased on after them. Then she just popped from her tummy to her back (where at last her hands stayed still long enough for her to catch them and stick them in her mouth).

She can stick a whole lotta hand in her mouth. She loves sucking. 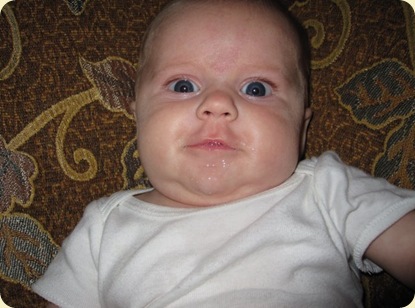 Usually a quiet baby, she has recently been discovering her ability to wail. While I was pottying Miriam the other day, Rachel came into my room and started to close the door. It was still in the early morning and the only light in the house was coming through the window in the living room so I wanted our bedroom door to remain open.

“But I’m just closing it,” she said, pushing it toward the frame.

Miriam joined her voice in with Rachel’s.

“Waaaaa! Waaaa! Waaaa!” she cried, quite dramatically and sincerely, before looking at Rachel, breaking into a huge smile and giving a little giggle.

It was as if she was either mimicking Rachel or making fun of her for crying.

Miriam’s been crying a lot today, too. Since coming home from the doctor’s office she’s cried nearly constantly every time she wakes up. She’s running a low-grade fever and is incredibly uncomfortable and has decided against suffering in silence.

But she did take a break from crying for story time (which was mainly a continuous stream of Dr. Seuss* and Little Miss** books) and was even quite happy about life for like a whole half hour! We’re spoiled. I know.

I don’t quite know what’s going on in the picture below. I think Andrew is purposely smiling for the camera since he’s afraid of going all crazy-eyed in photos. Miriam is doing her little tongue-thing. And Rachel is probably talking about what she would do if she were Little Miss Somersault. Little Miss Somersault happens to be a new hero of sorts for Rachel, which means that Rachel spends a lot of time somersaulting around the house. 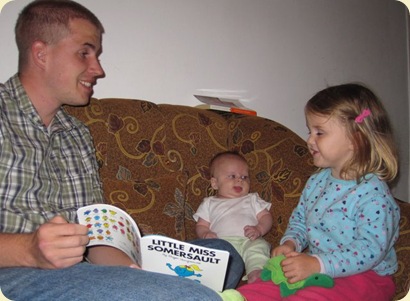 She loved to somersault before we got this book, but now the time she spends somersaulting has easily quadrupled. This is dangerous, both for Rachel and any furniture that happens to stand in her way, including Miriam.

Miriam loves looking at Rachel and can often be found staring at her. I’m sure she’s soaking up everything Rachel does in order to repeat it later when she learns a little bit more about life…like what exactly hands are for and why people have feet. 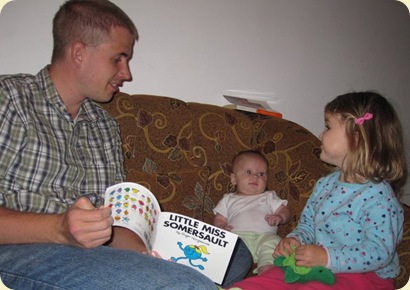 She also is starting to find Rachel rather hilarious, more so than either Andrew or me. Rachel can always make Miriam smile. Or cry. It’s kind of a toss-up, really. 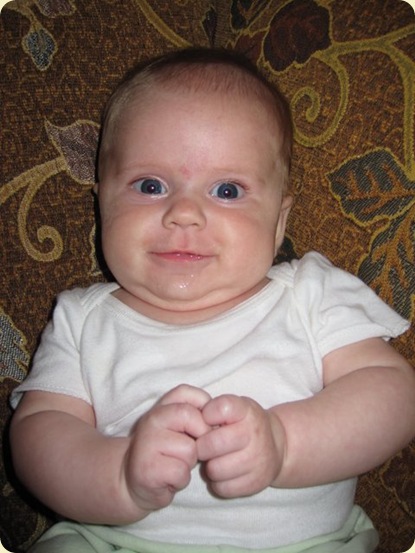 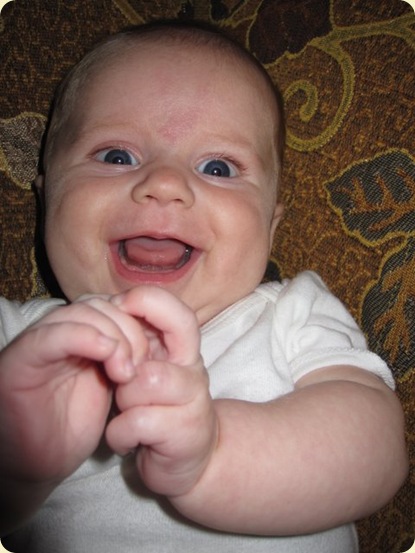 Miriam is too young to have a calling at church, but she sure is helpful with mine! Farayella has trouble behaving in primary, but when he sits by Miriam he keeps quiet by gently holding her hand or stroking her cheek or counting her toes. He absolutely adores her.

And, really, can you blame him? 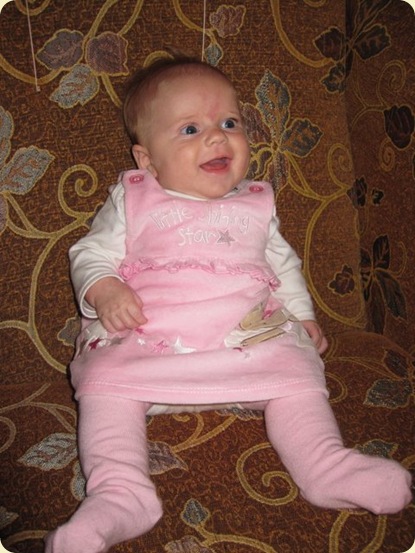 She showers him with smiles to thank him for his attention, which only encourages him to give her more attention. I’m pretty sure she knows she commands the world with that little smile of hers.