We left in the thick early morning fog to drive up to Alexandria. It’s often foggy in the late evenings and early morning here, but I’ve never seen the fog quite as thick as it was today. Everyone was driving with their hazards lights blinking and we couldn’t see across the Nile, let alone a hundred feet in front of us. It was eerie.

When I woke up from my car-nap, though, the fog had dispelled and the trash-filled desert splayed out in all directions. We still had a couple of hours worth of driving in front of us but were stopping half-way to visit a Coptic monastery.

Our driver pulled into a rest stop/gas station for a twenty minute “smoking break.” For him, of course. We just used it to stretch our legs and let Rachel play on the—get this—playground! This rest stop just sprouted out of the middle of nowhere and came complete with playground and Western shopping outlets. I can’t, for the life of me, understand why they would have such a nice playground out in the middle of the desert. Nothing like that exists in Cairo.

Rachel enjoyed the swings but she doesn’t have very much experience with swings, since Maadi House doesn’t have any, so when she wanted to get off she just let go. The result was a little traumatizing for her—she learned that gravity is still in full force.

Twenty minutes of quality playtime later we packed back into the van and headed out to the Paromeos (or Baramos) Monastery in Wadi el-Natrun. It was only 15 minutes away from the rest stop. Why in the world did we stop at the rest stop when our destination was only 15 minutes further? We didn’t even gas up and our driver spent the whole time smoking at the monastery. Oh, well. 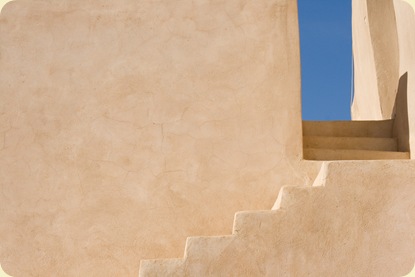 They are nice to visit, but I’m not sure that I could survive in one. I’m too silly to be a monk. Also, I’m a girl. Since I’m probably too silly to be a nun, I’ll have to be content with devoting my life to the Lord through motherhood. 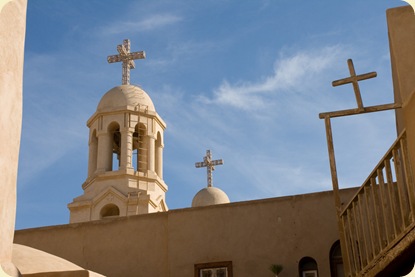 We went on a tour of the monastery with a monk. He showed us the chapel of the Virgin Mary, including the bread-making room and the refectory.

The monastery was surprisingly green for being in the middle of the desert and there were gardens and wooden statues all around. 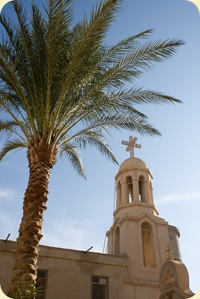 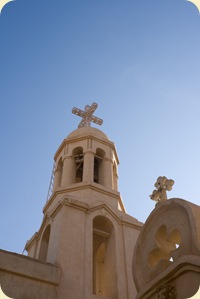 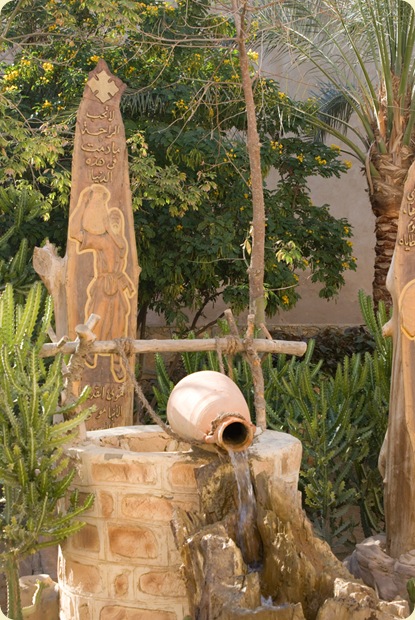 The wall around the monastery was built to avoid attacks by Berbers and Bedouins—it is still original from the 9th century AD. There is a large building inside the walls with a drawbridge that the monks used to hide in during attacks. Once the drawbridge was closed there was no way to enter or exit the building. 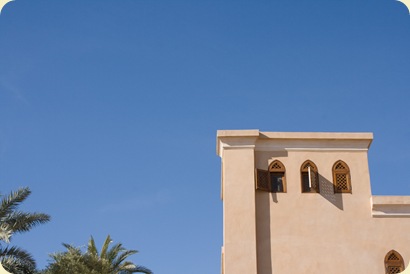 On our way out the front gate we saw a clock that had the twelve apostles on it instead of numbers, and at the gift shop we found a CD that featured, probably illegally, some of Greg Olsen’s artwork. 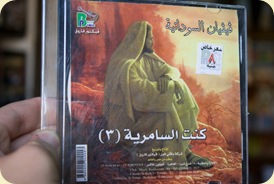 Once in Alexandria we got settled in our sketchy hotel—Hotel Nobel, a two-star hotel that our travel agent told us was a three-star hotel.

The paint on our walls and ceiling were peeling. The bathroom was a shower/toilet combination. The balcony was missing a large chunk of the railing. There was black hair floating in the orange juice. The noise from the street was unbelievable, but at least we had sea side rooms. It was alright, but not exactly what Ali had led us to believe we were getting.

Since Ali charged us 280 LE per room, without breakfast, and the price list in the hotel listed a double room as 120 LE, including breakfast, we asked about breakfast at the front desk who told us that it was, of course, included in the price, so we ate breakfast…although we skipped the hairy orange juice.

We need to have some words with Ali…anyway… 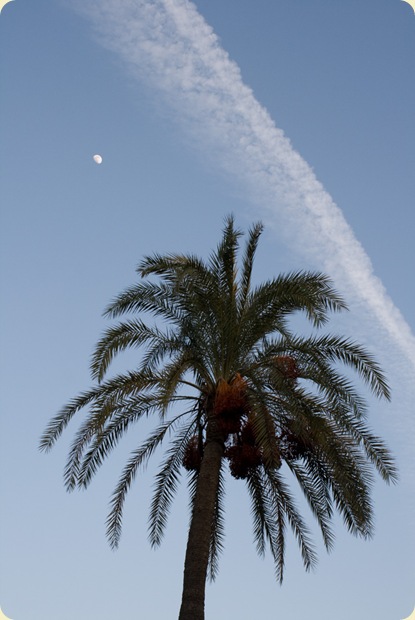 After we were settled (or unsettled, depending on how you look at it) we hopped on a minibus and went into downtown to Taverna, an oriental pizza place. Their shawarma pies are excellent. We ate and then headed over to the Shallalat Gardens to let Rachel run around.

When we first got there people were sprawled out all over the grass—picnicking, playing soccer and tag, lounging. I spread my jacket out on the ground and put Miriam down to kick around for a few minutes. She has been spending so much time being carried around that I thought it would be nice for her to stretch out for a change. No sooner had I got all settled, however, when a man with a whistle started running over to us like an angry goose—flapping his arms, yelling and blasting his whistle. He kicked us off the grass.

Apparently the grass is meant for looking at. Period.

The poor grass-Nazi continued to run around the park the whole time we were there, reminding people to keep off the grass but people would slowly trickle back onto the grass as he made his way to the opposite end of the park. What a sad job. 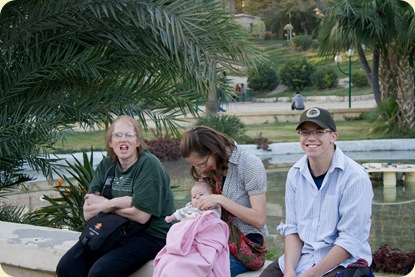 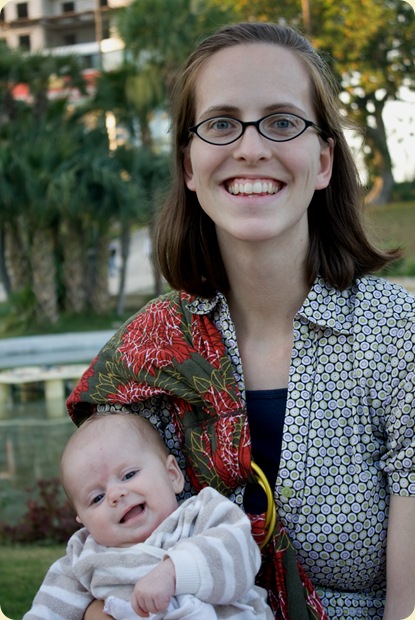 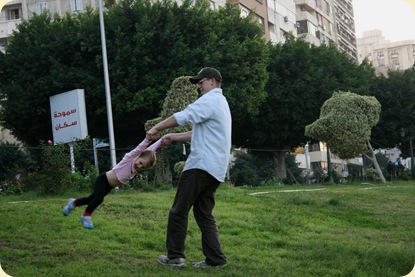 Shallalat means ‘waterfalls’ so Andrew took the camera and wandered all over the park trying to find the waterfalls. He was unsuccessful in that endeavor but he was able to find some ruins of the Alexandria Wall.

We wanted to see the sunset over the Mediterranean Sea so when it started getting dusky we slowly made our way to the corniche, on 26 of July Street. Rachel was so exhausted from the day that she fell asleep before we even made it to the Sea. 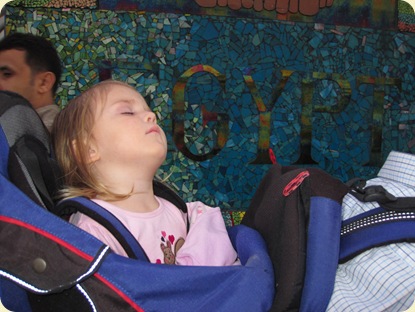 The sunset was beautiful and we didn’t want to wake Rachel so we just kept walking. 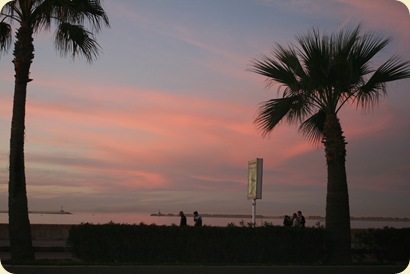 We walked past the beautiful Mosque of Al-Qaed Ibrahim… 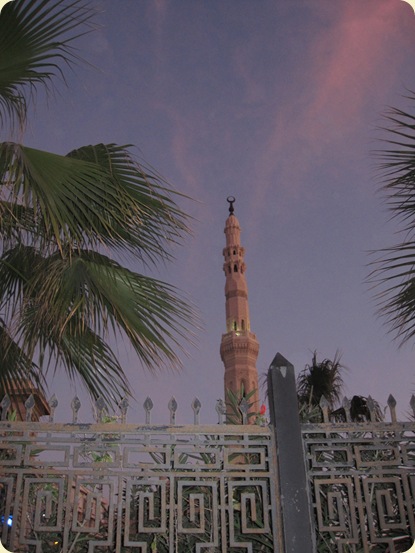 …and finally came to rest at Midan Saad Zaghloul, overlooking a statue of Saad Zaghloul, himself. The midan was swarming with police officers guarding the monument. One of the officers assumed we were interested in the monument (really we were just taking a nursing break because there were benches) and told us to take a picture. So we did.

Then he told us to get closer to take another picture.

I took a picture and then returned to the benches. 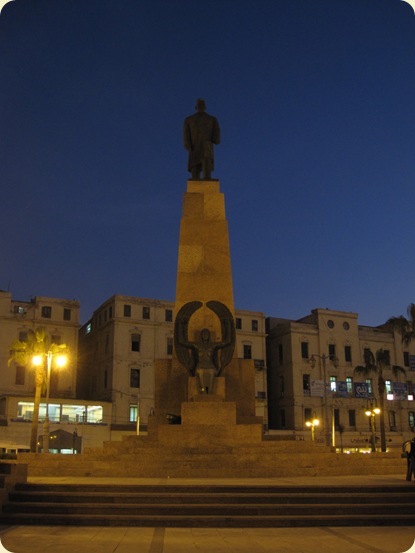 So we left to go get dinner before turning in for the night in our hotel. Jacob shared a room with Andrew and I slept with both the girls horizontally on the bed, Rachel by the headboard, me in the middle, and Miriam at the foot of the bed with the blankets all rolled up into a bolster to keep her from falling off. It was a long night.

Every time I woke up both the girls were plastered to either side of me so I’d push them a few inches away so that I could wiggle around a bit and get comfortable. Then I’d wake up again and they’d both be right up beside me again. I must be some sort of a child-magnet. It made it difficult to sleep but I suppose it was better than having either of them fall off the bed…