I’m not sure whose idea it was to do the Dashur, Saqqara, and Giza Pyramids all in one day. It was an exhausting venture, to say the least, and much colder than we had planned on. That desert wind just rips through you!

We learned today that neither of our girls like wind very much. 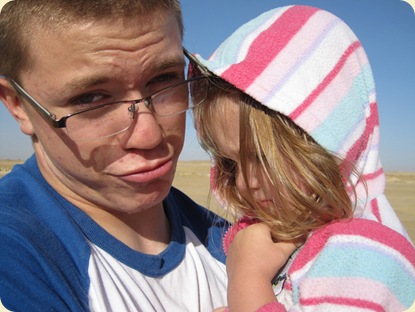 Rachel wanted me to hold her but I was already holding Miriam, so Rachel climbed onto my back. That’s a whole lotta kid I’m packing. 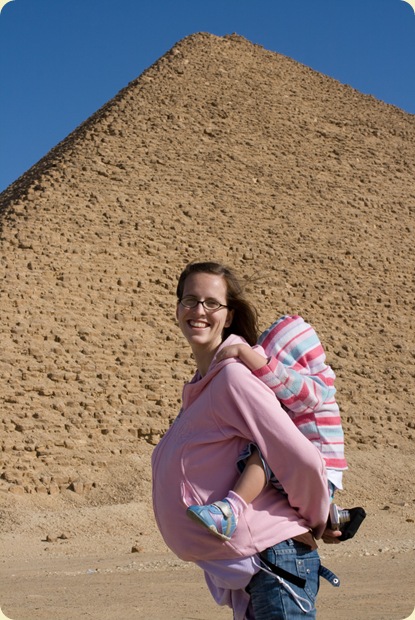 Miriam was the only one snug and warm the whole time. 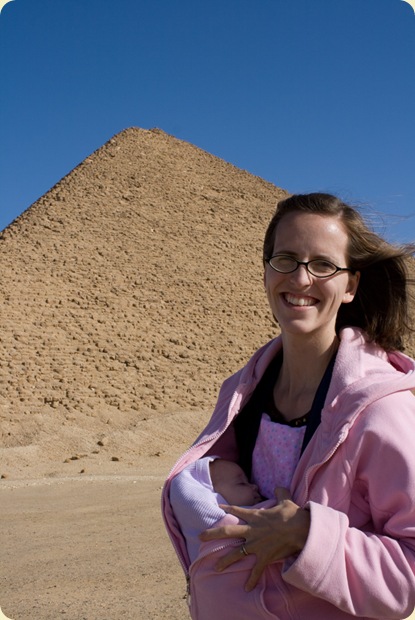 Everyone hiked up to the entrance of the Red Pyramid and then we stood around debating about who was going to go inside and who was not. No one wanted to help Rachel down the tunnel. She tends to be a bit of a scaredy cat in dark, enclosed spaces. Grandma opted to go back down to the van with her. Andrew started carrying Rachel back down the stairs and slipped, almost falling under the railing and down the pyramid, taking Rachel with him. Luckily he caught hold of the railing, so instead of plummeting to his death he only landed on his keister (or “buster” as Grandpa says). Rachel screamed halfway down the pyramid until we convinced her that Andrew wasn’t going to drop her.

I debated going down inside with Miriam strapped to me, but the baksheesh guy at the top said that he wasn’t going to turn the lights on and I didn’t want to be fumbling with a flashlight and Miriam at the same time so I also decided to go back and sit in the van.

Grandpa, Andrew, and Jacob went down inside, but Grandpa only made it halfway down before he had to turn back, due to his vertigo. So in the end only Andrew and Jacob made it down inside, and once they were inside the lights finally got switched on.

Jacob was so pumped to have gone inside a pyramid—even though there isn’t much to see inside and the stench of ammonia is almost unbearable.

When they came back out we drove around to the back of the Red Pyramid so that we could get a good look at the Bent Pyramid. It used to be open to tourists but it seems to be closed again so we couldn’t get right up to it. Rachel had a great time playing with Uncle “Jaybutt” by the Red Pyramid, though. 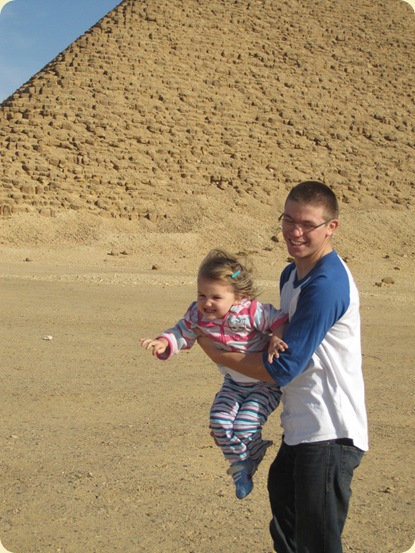 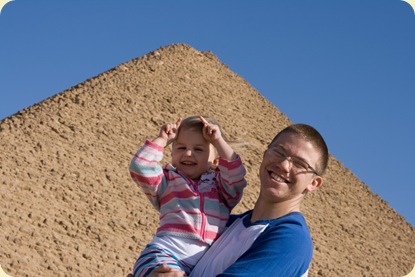 Next we headed off to the Saqqara pyramid complex to see the Pyramid of Djoser, the famous step pyramid. 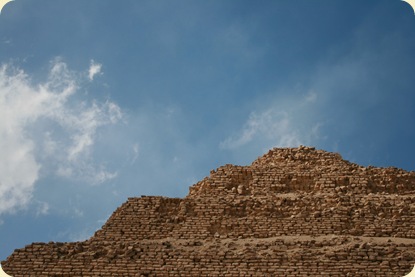 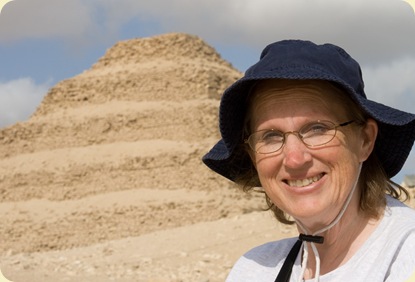 We visited the Imhotep Museum for the first time, which was nice. The newer museums in Egypt are nicely labeled (so are actually educational and not merely sensational, unlike the Egyptian Museum) and are nicely air-conditioned and lighted. It gave us a good idea—or at least a better idea—of who Djoser and his vizier, Imhotep, were before we explored the ruins of the burial complex.

The pyramid itself is crumbling—you’d think they would have chosen a more durable building material. I mean, really! It’s only been standing there since 2600 BC. They could have chosen something that would stand up to the elements a bit better…but, nooooo! Instead they expect us to clean up their mess, fix their pyramids, interpret their hieroglyphics. 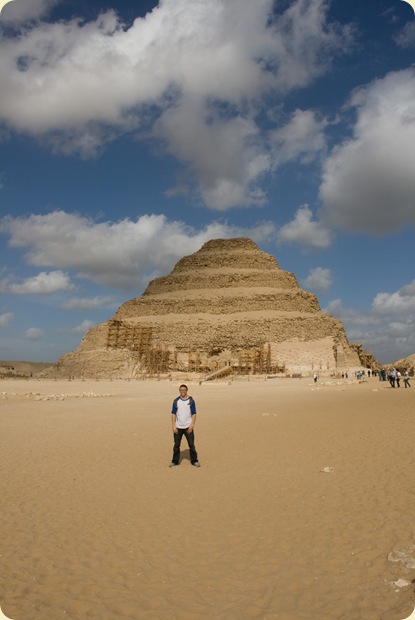 Currently they are doing some restoration work on the pyramid using rather primitive techniques. Leaving the all-terrain dolly at ground-level, they are toting up huge slabs of stone using a pole and rope. I don’t know why. 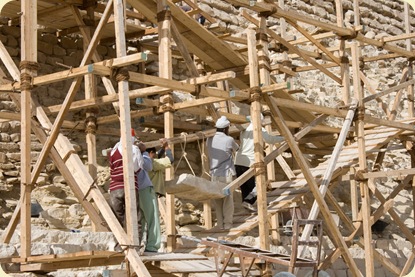 Miriam was especially happy to see some sunshine after being cooped up in my sweater all morning. 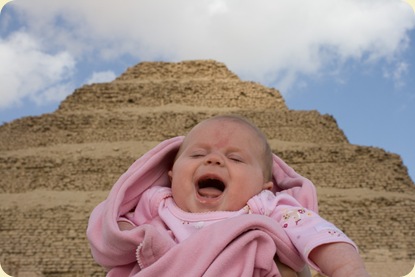 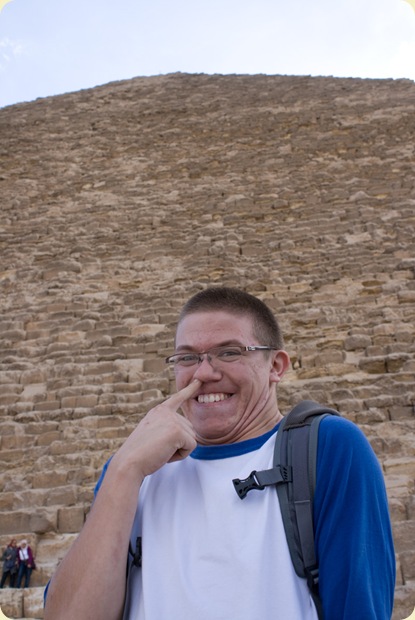 Grandpa taught Rachel how to make a pyramid with her arms and then she went around commanding everyone to also make pyramids with their arms. We all obliged. 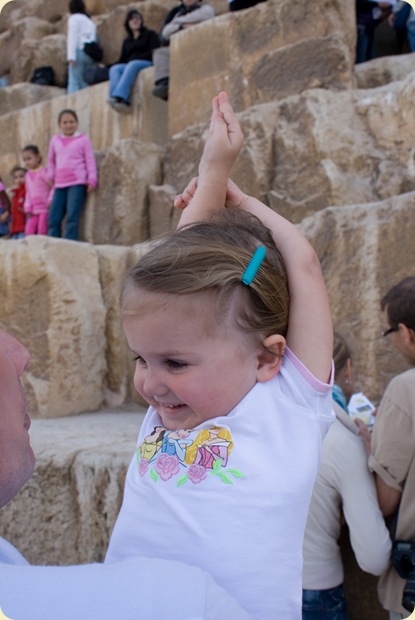 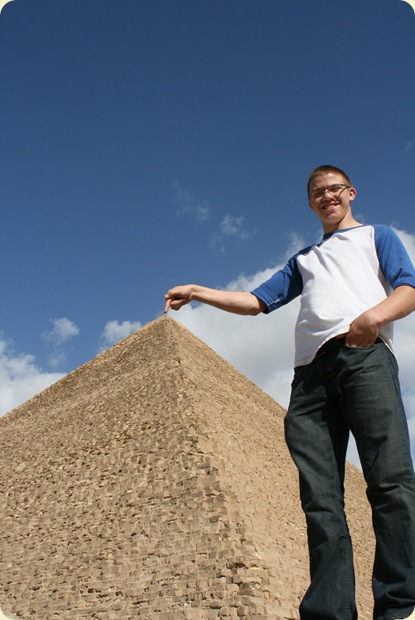 Jacob had so. much. fun. here. He was thrilled and excited to go everywhere but he was giddy beyond belief about going to the pyramids. 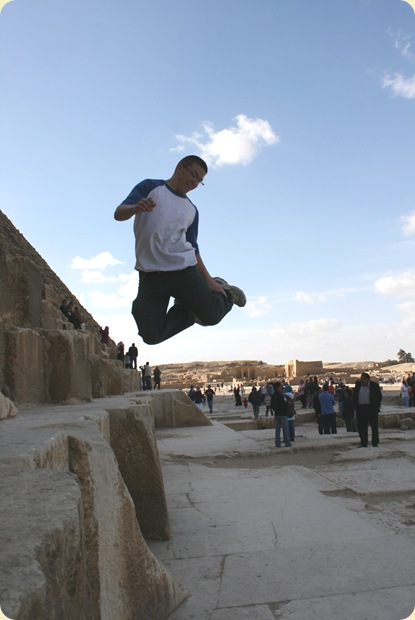 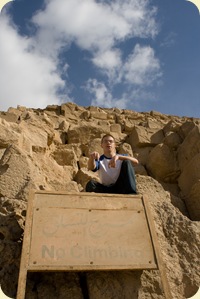 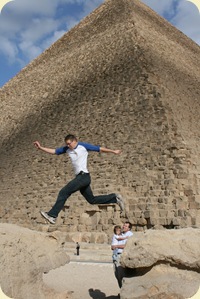 I tried to mimic his enthusiasm but somehow  managed to look awkward and scared instead of macho and excited. I’ll have to work on that. 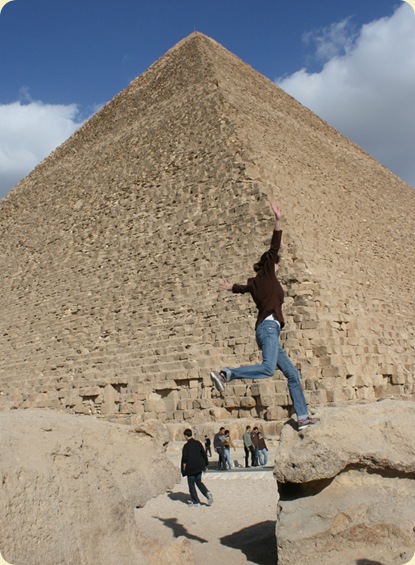 We sent Jacob on a camel ride to the third pyramid, the Pyramid of Menkaure, by himself. Because of the sneakiness and shrewdness of the camel dealers at the pyramids, Andrew and I tracked behind them on a stealth mission, of sorts, to make sure that everything went smoothly. Sometimes they hold you for ransom on your camel until you pay them extra money or do other dishonest things.

His ride was a little interesting with a camel-change mid-ride and things like that, and of course his guide wanted extra money at the end, but overall the ride went smoothly. My favorite part was when Jacob glanced back at us all worried and mouthed,

Apparently we had forgotten to tell Jacob the deal we had made with his guide and he was a little nervous when his camel started loping across the dessert. 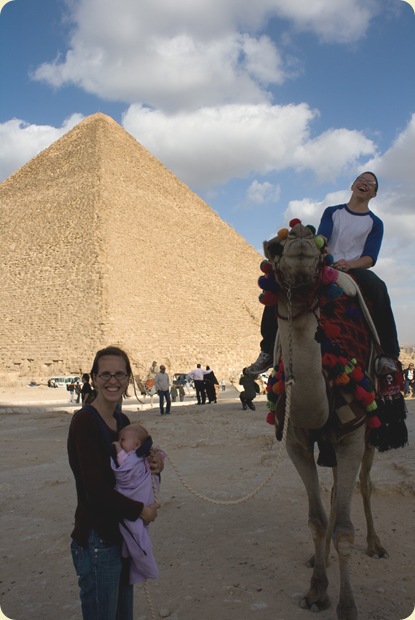 We were all so worn out by the time we got to the Sphinx that we didn’t even bother getting very close to it and when we got home it was all we could do to keep from crawling into bed. At least, it was all I could do to not crawl into bed. I shouldn’t speak for everyone, but I’m pretty sure they were all exhausted, too! 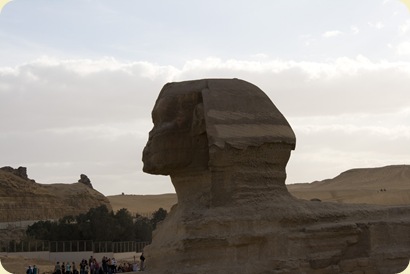