One night a long, long time ago, in 2002 (last decade!), right before my second semester at BYU, I was up late with my roommate, Ross, trying to figure out my schedule for Winter 2003. I had one last class to find to take the requisite amount of credits, but had no idea what I should take. None.

I decided that a foreign language could be cool. I took a couple years of German in high school, which in reality amounted to nothing (Ich heisse Andrew Heiss. Best sentence ever.), but I enjoyed it.

The registration website listed all available courses alphabetically, so I made my way down the list. Afrikaans looked cool, but was only for returned missionaries—there weren’t any 100 level classes since anyone coming back from a mission in South Africa would be more or less up on their Afrikaans. Albanian was the same story.

Arabic was next in line. There was one seat left in the 8 AM 101 class.1 On a whim, I registered. Ross took a quadruple take before breaking out in raucous laughter.

Regardless, I took the class and loved it—I even made it to most of the early morning sessions. I enjoyed it so much that I took 102 during the Spring term, followed by an intensive 201/301 course in the Summer term. Yeah, that’s a year of Arabic in 8 weeks. Whoa. In 8 months, from January to August 2003, I had taken two years of Arabic. Boo-yeah.

Three weeks later I was sitting in a classroom in Provo again, only instead of studying Arabic at BYU, I was conjugating Italian verbs at the MTC. I had been called to the Italy Rome Mission for two years. Italian quickly slaughtered my nascent Arabic (but it was surprisingly easy to learn. Crazy impossible Arabic…)

After I came home from my mission in 2005 (and our honeymoon in Italy at the end of that year), I decided to resurrect my forsaken Arabic and combine it with my newfound Italian. Since then, I’ve spent most of my academic career looking for connections between Italy and the Middle East. Most of my undergrad papers were about some obscure aspect of comparative history or literary theory that showed unknown connections between the two cultures—in 2007 I presented a paper about Dante Alighieri’s treatment of the Prophet Mohammed in the Divine Comedy.

Because I’m totally awesome and unoriginal, I’ve been keeping with the same theme for my thesis, looking at the history of the Italian community in Cairo from 1911–14. Obscure enough for you?

So with that long preface, after a four year hiatus I find myself in Rome once again. AUC was kind enough to give me funding to come and do archival research at the Ministry of Foreign Affairs, National Library, Central State Archives, and other research centers here in Rome. That’s definitely a perk of being a grad student. I never thought I’d be paid to come to Italy and sit in stacks of old archives all day.

Or get paid to eat this stuff for dinner: 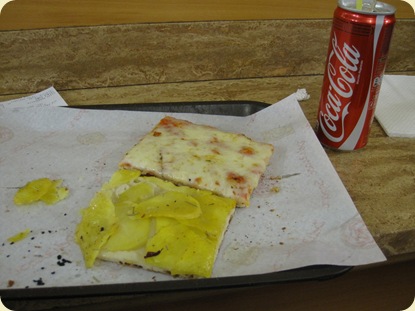