Today was a lot more relaxed than the past few days. Since I’d already gotten embassy approval and requested all possible documents from both the central archives and the foreign ministry, all I had left to do was go look through the documents. I was done hurriedly running around from archive to library. So I had breakfast at the local bar—a creme-filled donut and yet another cup of orzo—and got on the metro to EUR. 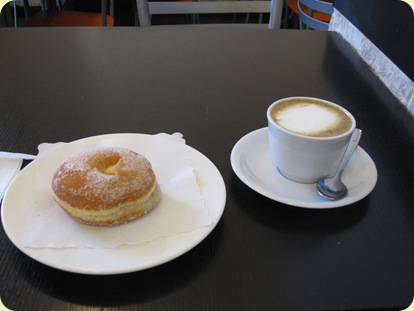 Getting into the archives the second time was almost too easy. I left my passport at the front desk, got my guest pass, dropped my stuff off in my locker, and went upstairs to see what the archive elves had left me. In theory I should have had four envelopes of documents sitting on a shelf with my name on it.

I went to the shelves, found the one with my number, and sure enough, there were four envelopes. I love it when things work right.

The envelopes were most definitely not what I was expecting. “Envelope” conjures up images of white or manilla packages with papers (or computers) inside. Here’s an actual archival envelope: 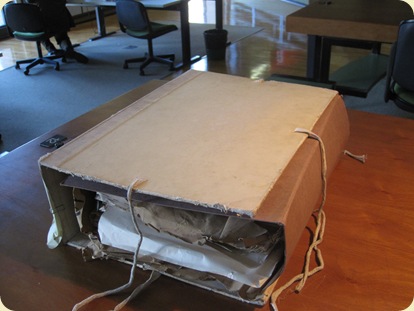 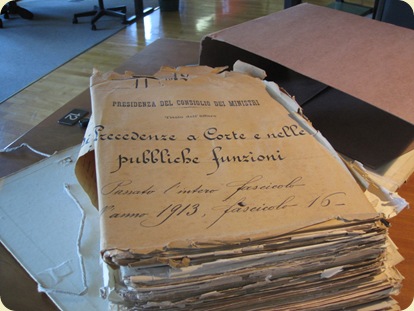 Each envelope is a loose-leaf collection of all the telegrams, memos, and other official documents sent to and between the official cabinet and the prime minister, Giovanni Giolitti in 1912. Half the documents were typed with an ancient typewriter—the others are all handwritten. You can see where the pen sometimes bled through the paper. All the documents are original. Some of the letters were inside envelopes with broken wax seals.

100 year old wax. 100 year old papers. Sweet awesomeness. This is why I’m doing history. I totally get a rush out of handling all this old secret stuff. This is the kind of stuff Obama, Biden, Clinton, Pelosi, and Reid are passing around right now. Wow.

There was plenty of top secret cabinet level stuff, including a long series of memos regarding the suspension and subsequent take over of a Cairo newspaper, al-Akhbar. The newspaper was critical of the war in Libya, so the Italians shut it down. It reopened a week later in Libya under new management (and flush with Italian money), and was miraculously pro-Italy. I was holding the documents that made that happen.

There were also top secret, and gruesome, photographs (from 1912, folks—that’s awesome!) of mutilated Italian soldiers found in a mosque in Tripoli. The photos were annotated by Giolitti and showed his outrage at the “barbarity of the Arabs.” Cool stuff.

However, while the indices I used yesterday were helpful in helping me find potential envelopes, and even though each listed document had a catalog number, there was practically no order whatsoever in the envelope itself. I spent 3.5 hours filing through each document in the four envelopes, stopping to take pictures whenever I found some mention of Cairo, Alexandria, or Egypt. I found a ton of stuff—I took 120 pictures—but I only found about half of what was listed in the index. Many documents were missing or mislabeled. Much of the stuff I found wasn’t in the index (like the stuff about al-Akhbar), though, so I’m pretty sure I still came away with a massive wealth of potential thesis sources.

Before leaving the archives for the day I called the foreign ministry to see if they had found a way to retrieve the envelopes for me. I was pretty desperate about it when I called; it seemed completely hopeless yesterday. The director answered and recognized my voice as soon as I said hello. Before I could say anything else she excitedly announced that everything was okay—they had found a way to get the envelopes for me. I’d be able to see everything on Monday and Tuesday.

I was ecstatic. Everything was working! The rest of my research in Rome was finally laid out for me. I’m going to the National Library tomorrow morning to make some more photocopies of potential secondary sources. Church on Sunday. Foreign ministry archives on Monday and Tuesday. Back to Cairo Tuesday night. Perfect.

To celebrate I got a piece of margherita pizza and a delicious glorified pig-in-a-blanket—instead of biscuit dough they used artisan bread dough. Amazing.

I then went to my favorite Italian church: St. Paul’s Outside the Walls. 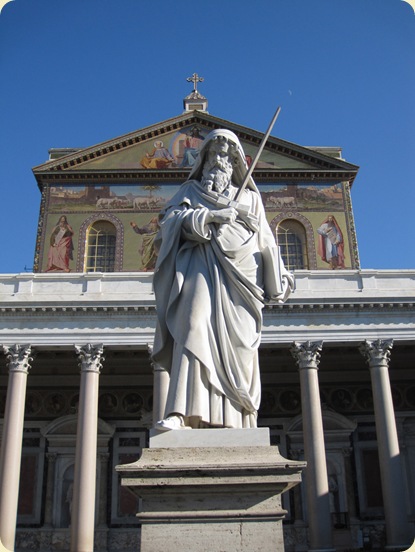 In November 2003, an hour after landing in Rome, my new mission president took our group to St. Paul’s before going to the mission home and mission office, where he taught us an unforgettable lesson.

You see, Mormons believe that Joseph Smith restored the fulness of the gospel and the full priesthood authority and that the only true church on earth today is the Church of Jesus Christ of Latter-day Saints. This is the driving force behind missionary work—missionaries are sent to all the world to preach the restored gospel and bring people to Christ through the true LDS church.

Missionaries (and many regular LDS members) tend to be overzealous, though, and extrapolate that since we’re the only true church, all other churches and religious are completely wrong and therefore evil. It becomes a starkly binary, black and white distinction.

In the MTC, where I learned how to be a missionary and how to speak Italian, the general feeling among the missionaries in my district and branch was that we were going out to save the Italians from the grips of the great and abominable church, as prophesied in 1 Nephi in the Book of Mormon. The Catholic church was the whore of the earth and the most evil organization on earth.

This made me feel real uncomfortable. I’d visited several European and American Catholic churches before going to the MTC and thought Catholics were great people. One of my best friends, and one of my aunts and cousins were Catholic and I saw nothing wrong with them. This unofficial MTC anti-Catholic sentiment continued, though. It was never taught by any of the leaders or instructors—rather, it was an oft-discussed topic during scripture study or while walking the halls.

My mission president stopped us in front of the church and asked us why we though we had come. I think I remember someone mutter under their breath something along the lines of “So we can scope out the competition,” but I’m not sure. Regardless, that seemed to be the general atmosphere.

He then took us inside the church. St. Paul’s is one of the 4 main pilgrimage basilicas in Rome, but because it is “outside the walls” and thus not in downtown Rome, it is generally the least-visited. Nobody was in the massive church. It is absolutely gorgeous inside. 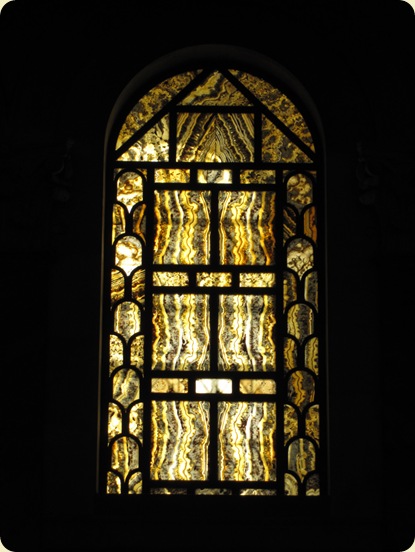 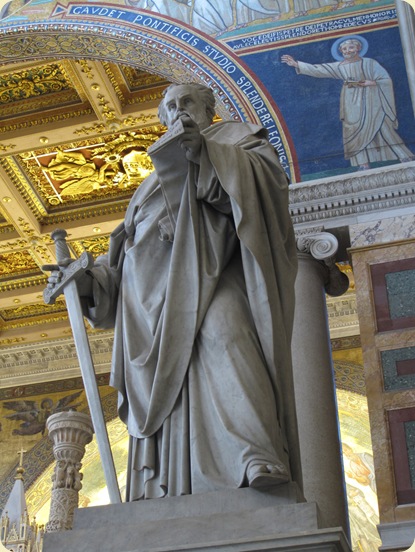 He directed our group to the right-hand transept and told us to look up at the Latin inscription. EXALTATA EST AD CAELESTIA REGNA 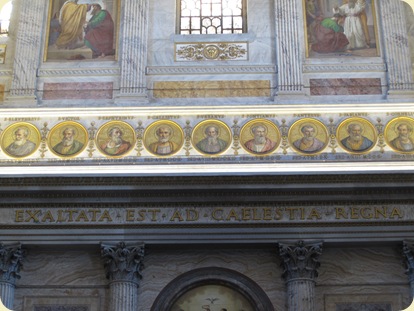 The fact that the Celestial Kingdom, a very Mormon doctrine, one that we have a monopoly on, is featured so prominently in one of the most important Catholic churches in the world was stunning. My mission president then went to explain that the Catholic church is far from evil and is not depraved from the truth. All churches, all religions have elements of truth to them. The Catholics at one point, before the Great Apostasy, were led by a prophet, Peter, and had the full truth. Islam, Buddhism, etc. all have elements of truth.

Our job as missionaries thus shifted from “saving the depraved heathen from the great and abominable church” to teaching and helping those that were prepared that they did indeed have truth, and that we had come to make an invitation like the following, from President Hinckley:

We say to everyone: live the teachings which you have received from your church. We invite you to come and learn from us, to see if we can add to those teachings and enhance your life and your understanding of things sacred and divine.

Far less religious hubris. It was a perfect way to kick off my mission in Rome and helped establish my own attitude towards other religions—that of holy envy.

I returned to the church often throughout my mission, and as I worked my way through the New Testament, especially the Pauline epistles, my love for the church grew. Paul in Italian is much more understandable than Paul in 17th century King James English. I became almost infatuated with his letters and saw myself in him—not that I was an enemy of the Church, arresting members and throwing them in jail, and not that I had a life-changing vision on the road to Damascus. I haven’t even been to Damascus (yet).

His missions and his attitude toward the gospel seemed to mirror mine. He was a fervent defender of the faith who loved those he taught—something I try to do in my own gospel and secular teaching. He was the first to preach to the Gentiles after Peter got the revelation to open the gospel up to them in Acts 9–10, so he understood that the gospel was big enough for everyone.

Plus, on his mission to Rome, he landed in Italy at a city named Puteoli, went to Rome for a while, traveled east, and ended up back in Rome, where he was beheaded, outside the city walls (since it was illegal to execute and/or bury Roman citizens in Rome proper), hence the name of the church. In maybe a silly way, I saw parallels in my own mission to Rome—the first city I was assigned to was Pozzuoli, the modern incarnation of the old Roman port. I was then assigned to Rome for over a year before heading east to Pescara, a beautiful beach city on the Adriatic coast. I finally went back to Rome for the final few days of my mission, although I wasn’t imprisoned or beheaded (thankfully). Frivolous connections, I know :) Be that as it may, I like Paul.

After spending some time in the church reflecting and relaxing, I hopped back on the metro and headed up to some famous old building of sorts. This one: 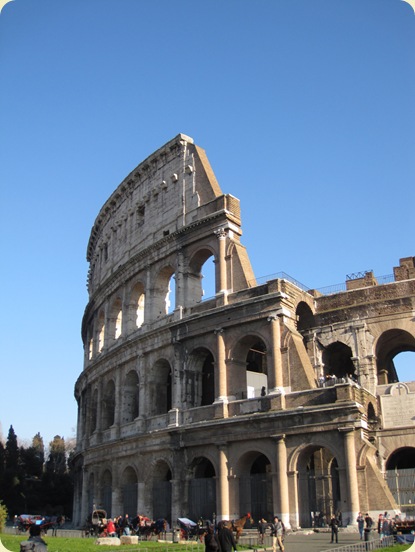 When Nancy and I came here in December 2005 for our honeymoon, she insisted on circumambulating the whole thing and touch every possible column. I laughed and said she was crazy, but I humored her and walked around with her as she tried to count the columns.

Today I walked around it again and touched all the columns because I’m über romantic like that. 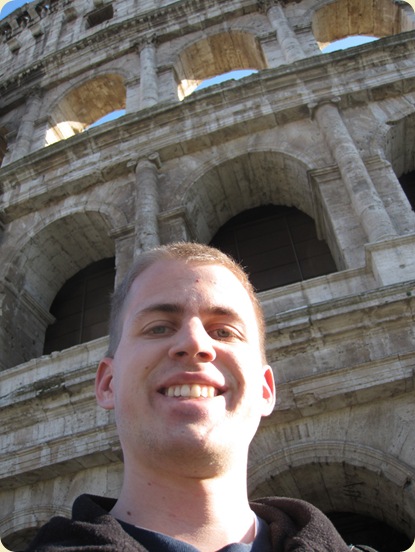 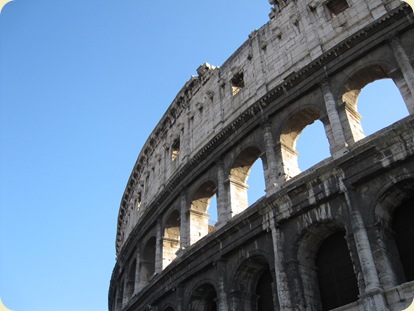 I planned on walking through the nearby Roman Forum, but apparently it’s not free anymore, so I walked along Via degli Imperatori to the Altare della Patria, or the Vittoriano. 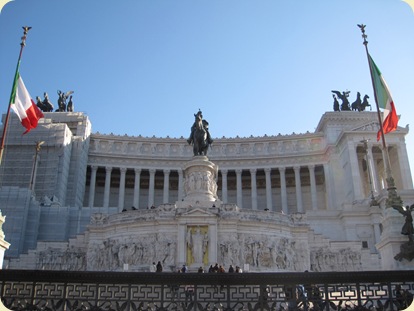 While it looks Roman, it was actually built from 1911–35. Near the top is the Tomb of the Unknown Soldier with two flanking eternal flames, both dedicated to “Gli Italiani all’Estero,” or Italians abroad. Unlike France and Britain, Italy was hardly a colonial power in the 1800s—they got into the game too late. Rather than go take over the world through direct imperialism, Italy instead sent millions of migrant workers abroad: to New York, Rio de Janiero, Buenos Aires, and Cairo (my thesis topic!). In theory these emigrants would promote Italian culture abroad, improving Italy’s image and strengthening Italian exports. One of Rome’s largest monuments is dedicated to these Italians abroad, which shows how important they were to Italian foreign policy at the time. 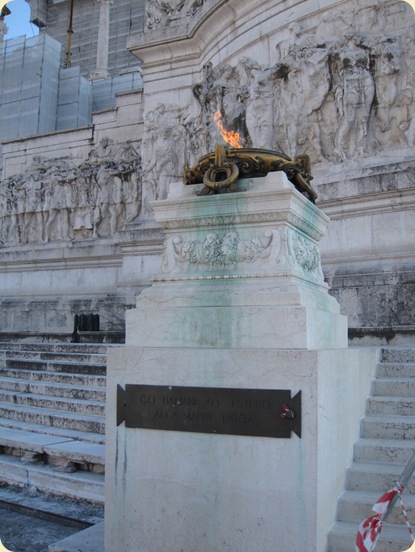 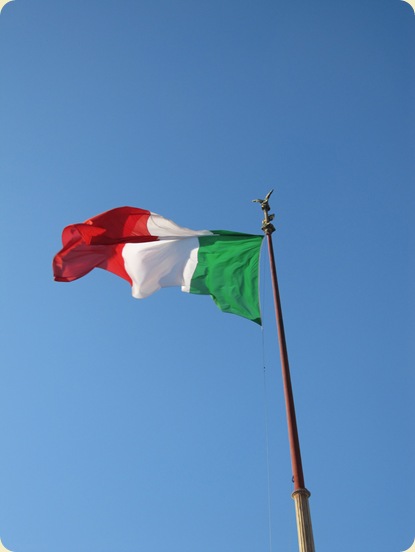 I went back to the hostel after that, where I met my soon-to-be conspiratorial thieving roommate. Not much else of note happened that night, besides the whole theft thing. Yeah. That sucks.