The night before we left for Grover, Rachel was too excited to sleep. She determined that she'd sleep in the living room with all the camping gear we'd assembled. 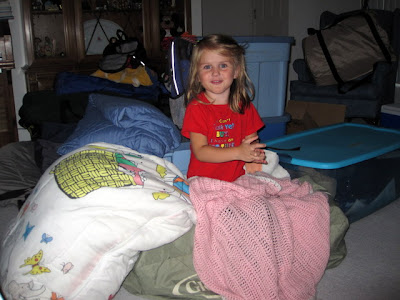 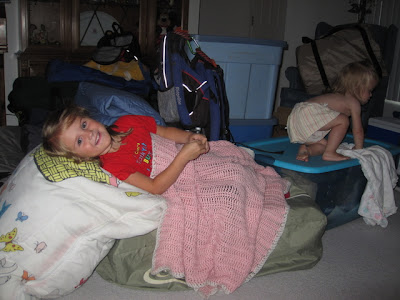 Being the mean mom that I am, I said no. 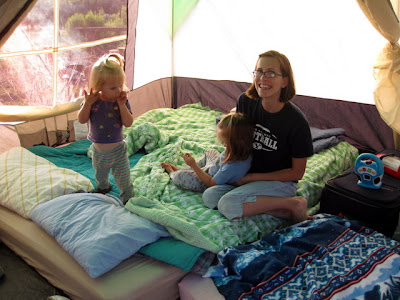 But there wasn't a lot that I said no to while we were camping.

Stay up late? Yes (but not every night).

Even though I didn't finish my dinner? Whatever.

Come on. It's camping.

The girls did a lot of playing in the sandbox our first night there. We thought Miriam got really messy but she later showed us that she could get a whole lot messier. 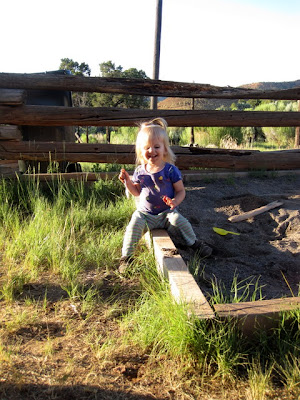 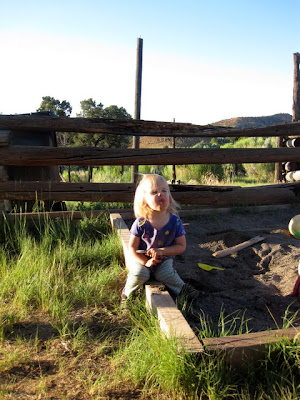 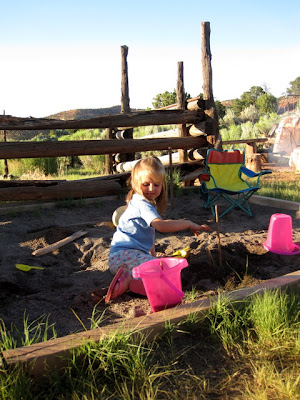 Miriam really took to the great outdoors. She was Little Miss Fearless—climbing fences, hiking the hill behind the cabin, even sitting on the roof! Rachel decided that she wanted a turn sitting on the roof as well but she was not nearly as calm, cool, and collected as Miriam was. She smiled for the picture but there were tears involved when it came to putting her up there in the first place. 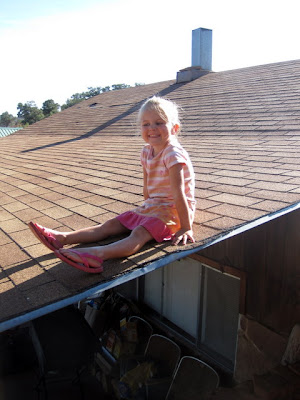 There are lizards all over the place down there. Sometimes the boys catch them. Even Daddy touched one. It was on the window of the old schoolhouse. 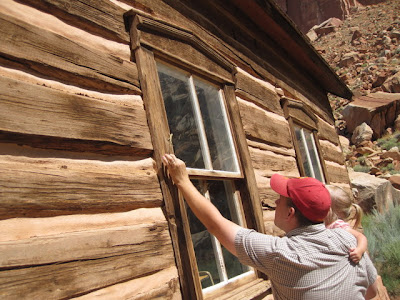 Suzy's husband Brycen brought his slack line/tightrope and stretched it between the utility rope and his jeep. 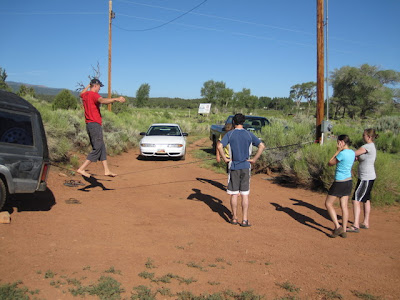 I tried it out once and all I can say is that I have a newfound respect for tightrope walkers. I had to have spotters on either side of me to keep my balance and I have pretty good balance when it comes to things like balance beams. Apparently that doesn't translate to tightropes. 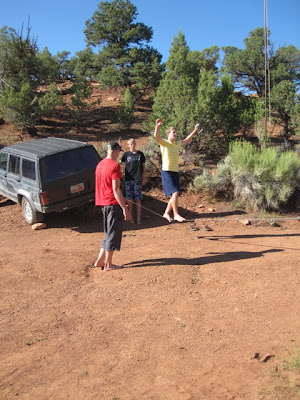 I think Brycen and Ben were the only ones who managed it. Rachel and Miriam called it the "little trampoline" and kept asking various big people to hold them on it so they could bounce (either on their bums or feet). For some reason I have no pictures that this happened. But it did.
Suzy also spent one complete afternoon playing a made up game with Rachel. It was the best present I've received all year and Rachel said that her favourite part of Grover was "playing with Phillip's big sister!" It was so nice of Suzy and Rachel had a blast.
I asked Suzy if she wanted to come home and live with us but she said no. So did Brycen.
The girls spent countless hours with Kayl, playing in the sandbox, colouring with chalk, terrorizing people with squirt bottles, and so forth. 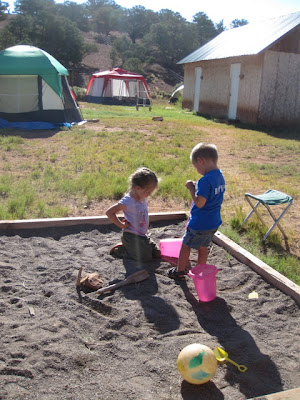 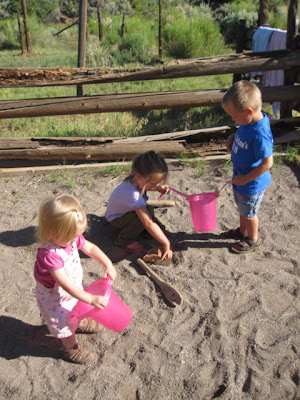 Miriam loved this old fence. She kept climbing all over it (I pulled four slivers out of her knees) and pulling off chunks of wood. Then she'd say, "Meme. Broke. Fence." 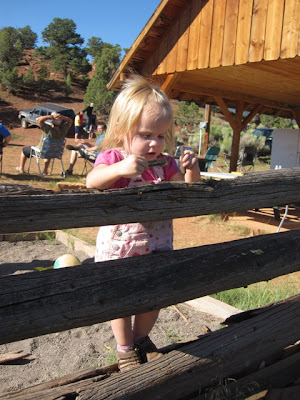 Rachel wanted to hike with the camelback on so badly, so we let her for a little while. It came down to her knees, just about. 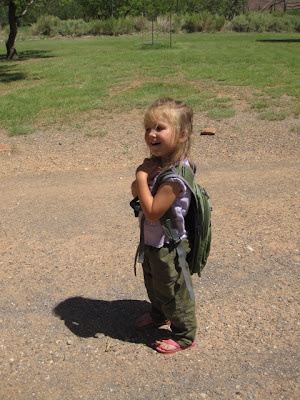 We stopped by the Ripple Rock Nature Center, which was actually a lot of fun...and seemed to be air conditioned. There were a bunch of activities inside to teach children about plants, animals, Native Americans, pioneers, and wilderness survival. 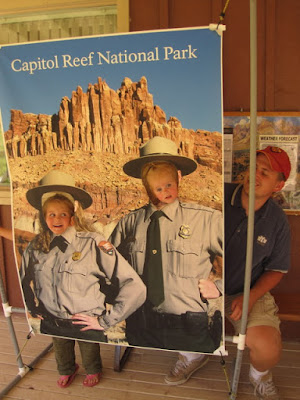 There's an old swingset at the cabin with a tire swing just like the one my Grandma and Grandpa Conrad had in their backyard when I was growing up. Rachel wanted to try it so badly but I scared her when I told her there was a hole under the swing that looked like it belonged to an animal—turns out that animal was a chipmunk, at least I think it belonged to a chipmunk because I saw one go in and out of it. Anyway, Rachel wouldn't use it after I mentioned that hole. 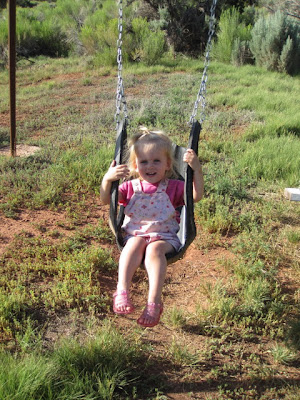 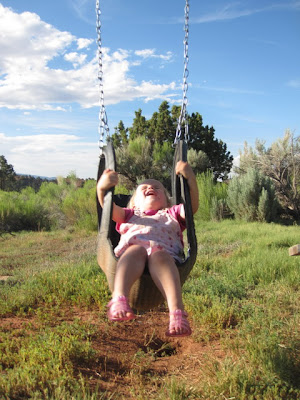 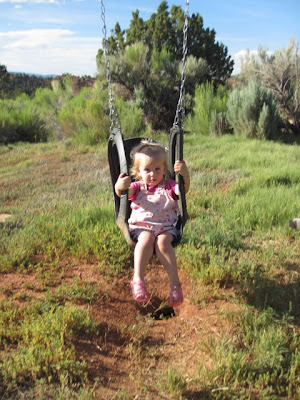 And we, of course, made several trips to visit the forts on the hill. 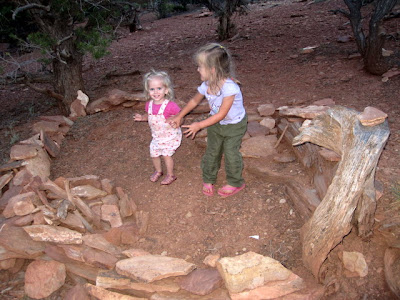 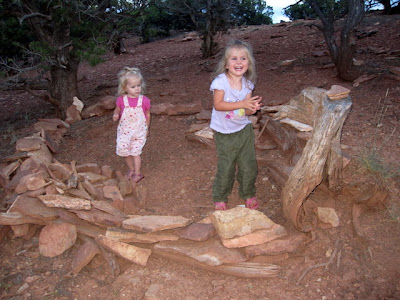 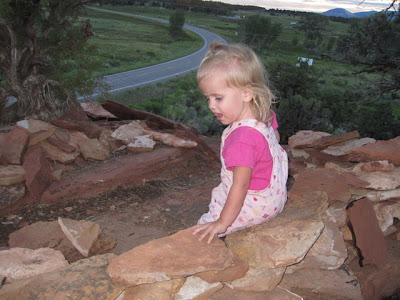 In case you're wondering what's going on in the next two pictures, it's an impromptu dance party. 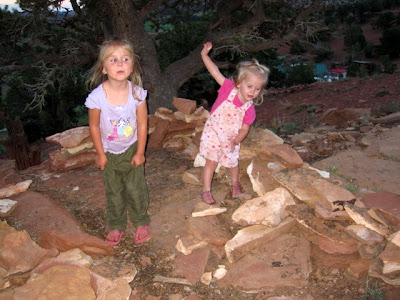 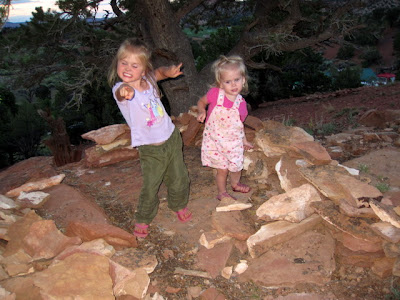 The girls asked to sit on the roof one last time on our last night in Grover. The minute I sat Miriam down she stood up and started running away from me. I snagged the straps of her overalls and hauled her off the roof. Sometimes she's too brave for her own good. 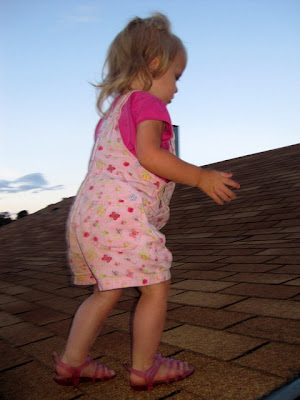 Grover is so much fun! We can't wait until next year!
Posted by Nancy at 5:46 PM