Take me to a happy place

Uncle David was in a benefit concert/play/thing this past weekend and we planned to go support him on Friday night. We loaded the kiddos in the van and swung by my mom's house to pick her up. We had just gotten on the freeway when the van started to shake, rattle (but, thankfully, not roll) so instead of going to the play we turned around and came back home.
And because the van was out of commission and Grandma and Grandpa were out of town we started using Grandpa's little two-door car. It's a little bit more a hassle when you've got to buckle two girls into the backseat, but it gets the job done. For some reason, though, Andrew assumed that the air conditioning didn't work and instead opted to roll down the windows. This while it's stifling hot.
Rachel thought our windy rides were awesome. 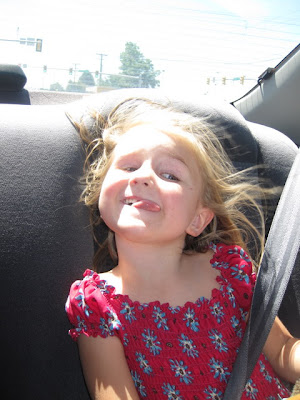 Miriam, on the other hand, hates wind (much like her father did at this age). 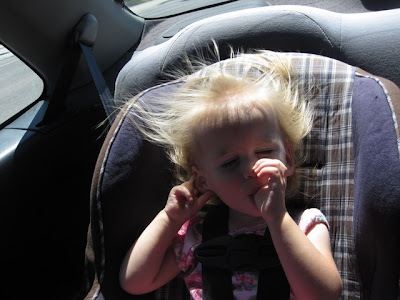 She's been spending every car ride in her "happy place" and only removes her thumb to cry, "Windy!" before putting it back in again.
We made it to Uncle David's play on Saturday. It was a smorgasbord of musical theater and World War musical hits. Kind of a "roadshow," as Uncle David put it when he asked us not to come and watch...apparently rehearsals weren't going so well. Things came together, somewhat, near the end, though, and we were re-invited. It was good, though definitely done on a budget. 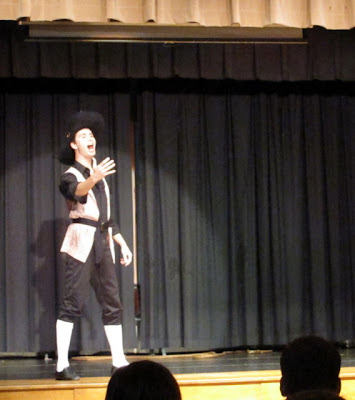 Uncle David sang Oh, Is There Not One Maiden Breast from Pirates of Penzance. 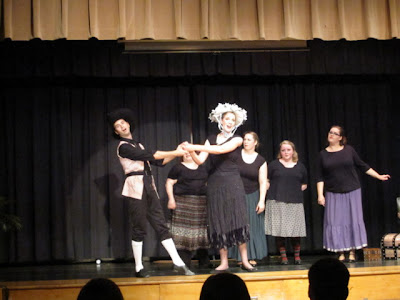 Also featured were songs from HMS Pinafore, which I watched when BYU put it on a number of years ago. I love both those musicals. I loved the World War Classics section—I've been a fan of the Andrews Sisters my whole life (literally) and I knew almost every song they put on. It was lovely!
The best part was that my cousins Lonnie and Ingrid were in town so they came with us! They've been here all week but have been busy shopping and sight-seeing so have hardly been "home." It was nice to get to visit with them a bit.
Posted by Nancy at 12:23 AM