For Family Home Evening this week, we met with Grandma and Grandpa's BYU ward at Rock Canyon Park. We had taco salad and then played long and hard. Rachel loves all the attention the BYU kids dish out to her, so even though she was incredibly grumpy she was off playing with the "big kids" most of the time we were there. Usually they seem to love her back just as much as she loves them but today several of them commented on her (bad) attitude.
We've gotten to bed late and have been forced out of bed early too many nights in a row. On Sunday morning (after not getting into bed until 10:30) we had to wake the girls up at 8:00 in the morning to get ready for church. Neither of them wanted to wake up.
Then we had a family dinner at Grandpa Frank and Grandma Sharon's house and even though we left early so that we could get the girls to bed at a decent time neither of them fell asleep until after 10:30. I thought for sure they'd sleep in this morning but then Rachel bounded into our bedroom at 8:00 in the morning.
She was beyond grumpy by dinnertime.
I've never been so happy to have 80 other adults around to take care of her.

Rachel spent most of her time rolling down the hill (the park is an old reservoir, I hear, so there are steep embankments bordering the field) and playing a gigantic game of twister.
Miriam, on the other hand, was much more cheerful (probably due in part to the extra-long nap she took this afternoon) and is still prone to wanting her mommy a bit more than Rachel, so she hung out with me. We blew bubbles together until Miriam knocked the bottle of bubble solution over. She did most of the blowing because she's reached that "I DO!" stage in full force. 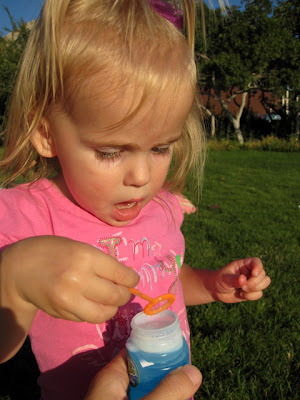 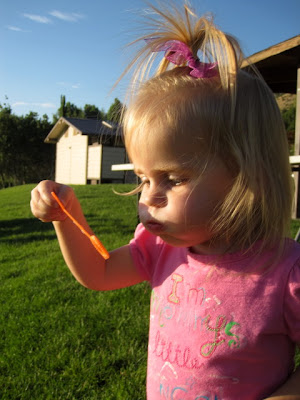 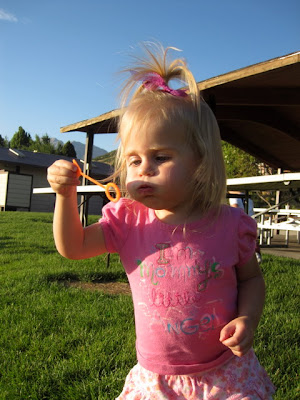 And while she looks mighty serious while she's blowing bubbles she doesn't act very seriously after she's done it. She cackles maniacally each time she succeeds in blowing any bubbles. It was hilarious! 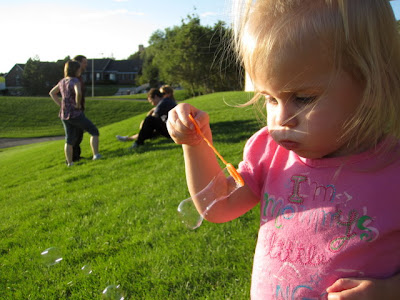 For some reason the bubbles weren't popping when they landed on the grass so the grass around her was covered with bubbles. 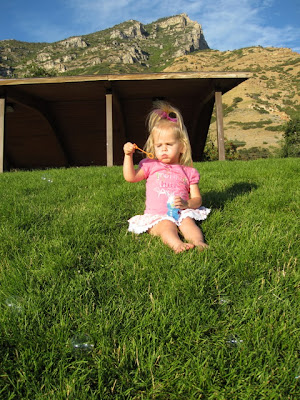 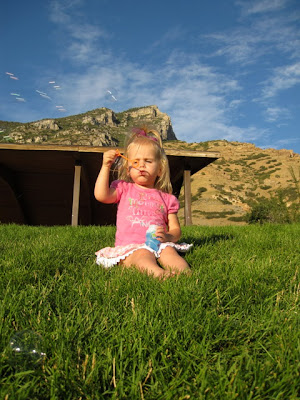 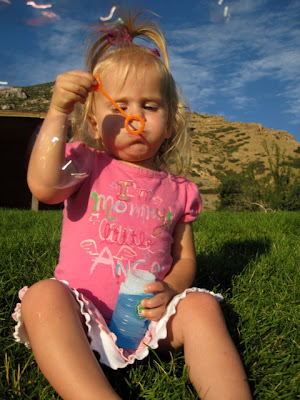 They were setting up for "movies in the park" with a 25 foot blow-up screen when we were getting ready to go. We ran into Uncle Patrick who was actually waiting for the show to start. I knew he was going but for some reason didn't clue in that perhaps we should plan on going, too. There was a huge display of...passion...from Rachel when we told her we weren't staying.

We had a handful of reasons not to: we hadn't brought bug spray, first of all (and there's a little pond at the park so the mosquitos are atrocious) and, second of all, Rachel was beyond tired and needed to go home whether she was ready to admit it or not. And those were only our top two reasons.

We are planning on going in a couple of weeks when they'll show Despicable Me—perhaps the promise of going to an outdoor movie will induce good behavior in Rachel. Or at least dampen her bad behavior.

On the way home we drove past the Provo temple and talked about the lesson we had during sharing time at church yesterday—that our bodies are temples. We talked about eating right, getting adequate rest, and practicing good hygiene. Then we pulled up to a stoplight and Andrew (flirtatiously) pinched my leg (a little too hard).

"Daddy!" Rachel scolded, "You're not treating Mommy's body like a temple!"

I'm happy to announce that it's only 9:30 PM and both the girls are already sleeping. At least, I hope they're already sleeping—they're both quiet at any rate (and sometimes that's all that matters...at least for my sanity's sake).

Never mind. Miriam's still chirping away but she's not the grumpy one today so I don't care.
Posted by Nancy at 11:41 PM