The Hancock reunion was July 22–23. I started writing about it last month but got completely sidetracked with camping and stuff. I would like to know how it's already the middle of August. Now I have to try to remember what happened a month ago and I can barely remember what happened yesterday so...we'll do lots of pictures.
Rachel quickly made friends with a little third-cousin of hers, who I'll just call L. 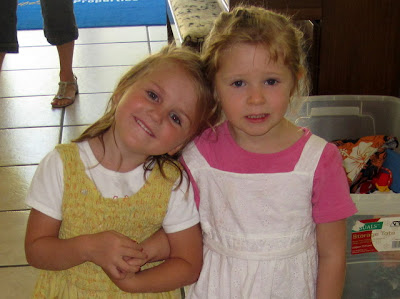 My great-great-great-great-great-grandfather, Thomas Hancock (who is buried in Nauvoo) was third cousins to John Hancock (the signer of the Declaration of Independence). I always knew I was related to him but it always seemed so distant—he didn't have any living descendants so no one is directly related to him but third cousins always seemed so far apart to me. To have this picture of Rachel snuggling up to one of her third cousins was kind of mind boggling.
It's possible that my Thomas Hancock was hobnobbing it up with John Hancock at a family reunion when they were four years old. Of course, John Hancock was born in Braintree and Thomas Hancock was born in Longmeadow and those towns/cities are over a hundred miles apart so I'm not sure how often they would have seen each other back in the 1700s. Still. It's possible. And that's kind of neat.
A bunch of the Canadian cousins came down and it was so fun to see them. Lori and Jim came and it was especially fun to see Lori because she's always so good at remembering not only my birthday but my children's birthdays as well. Lori's parents had nine children and just one of those nine children has thirteen children. When you factor in the rest of the children that Lori's siblings had and then start adding the grand-babies it gets to be a lot of birth dates. Lori has almost everyone's birthday tucked away in her mental calendar. I think that's absolutely amazing. 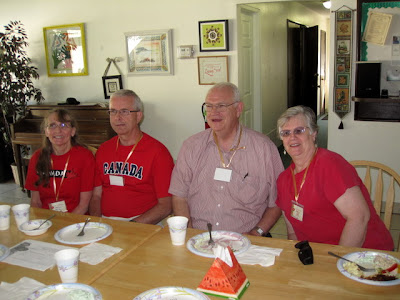 Andrew thought he was going to be bored at the reunion but instead he ended up playing games all day—mostly crokinole. 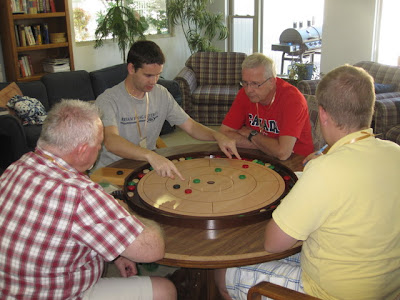 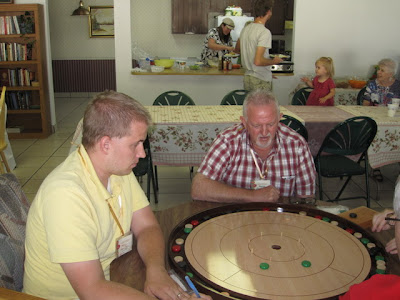 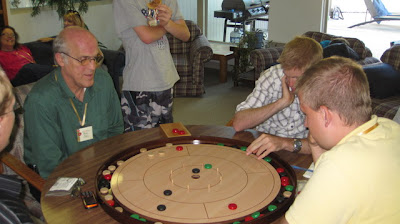 He was complaining of a sore flicking finger by the end of the day! 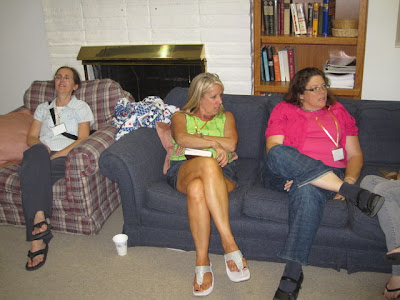 The women who had worked in the kitchen were complaining of a lot more than a sore finger!
The next day we stopped by Grandma Sharon and Grandpa Frank's house so they could give Rachel her birthday present. Grandpa Frank made her a train (that we'll probably keep for forever) and Grandma Sharon picked out a book about the Latter-day Prophets (that will hopefully last through several children before it falls apart). 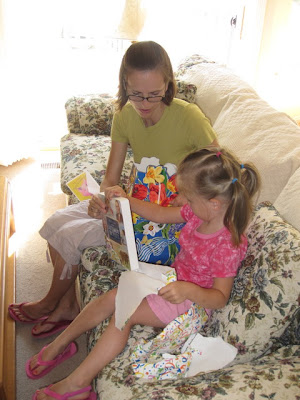 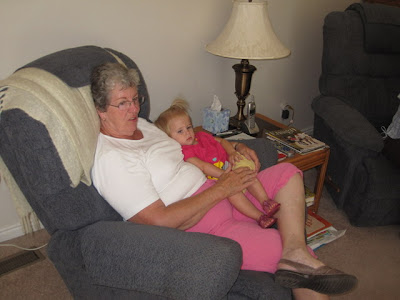 We couldn't stay long though because we had to get back to the reunion where Rachel coaxed me into the pool as soon as we walked in through the door. We spent the whole morning swimming.
After we'd dried out and had eaten some lunch, Debbie and Kelli took some of the little girls out to play. They were supposed to be racing to collect coins by sifting them out of a bucket of rice but I think they ended up making pretend soup. 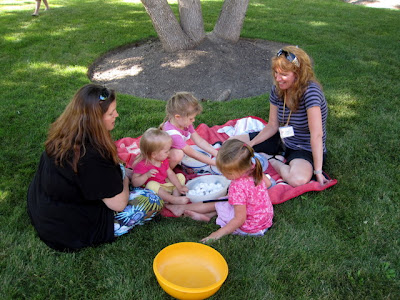 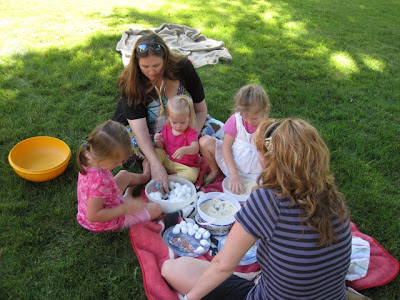 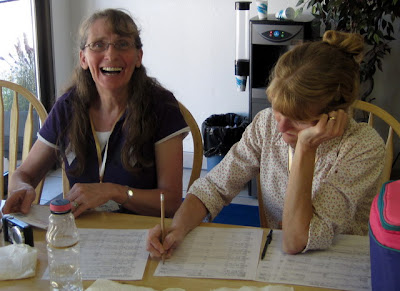 ...and played some games with the teens and visited. 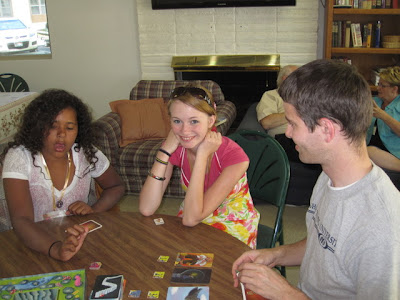 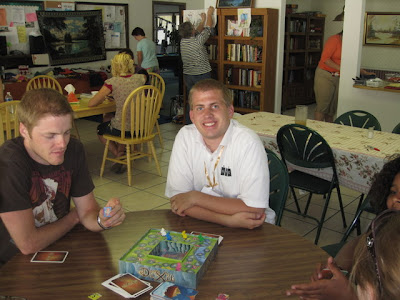 Later we had the traditional family auction, of course. David played the part of the auctioneer this year and we ended up raking in a surprising amount of money considering we had forgotten to plan an auction at all and kind of threw one together last minute when family members showed up with precious items (like handmade baby blankets and welded jewelry holders) to auction. 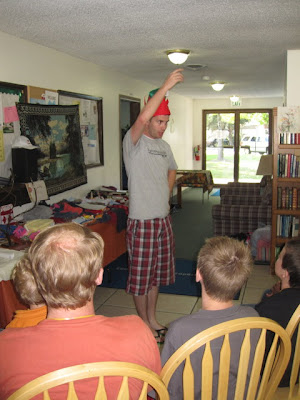 While everyone was cleaning up, I went outside with the little girls. We were so happy to have our little third cousins there to play with all day! 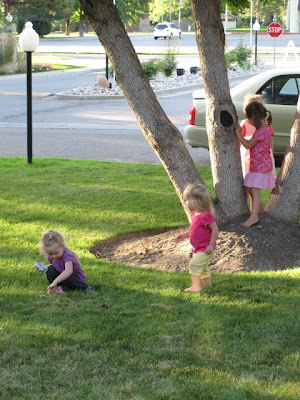 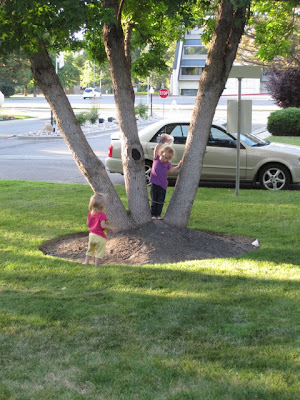 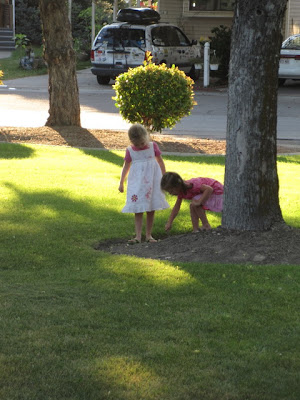 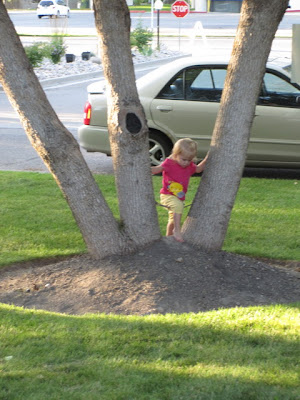 The two little ones were especially interested in the dirt. 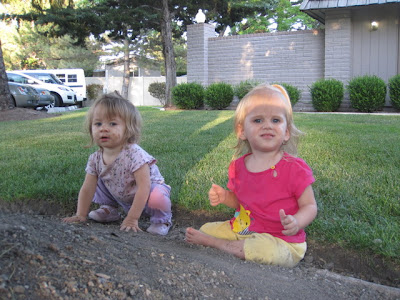 They were using this little hill as a slide...I'm not sure those pants are ever going to get clean! 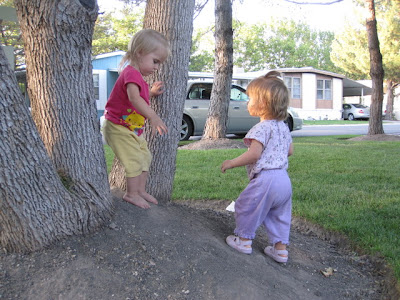 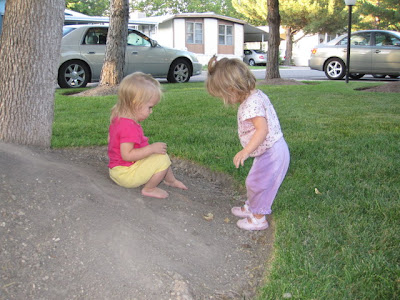 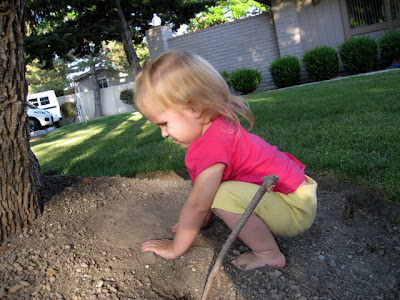 It was so much fun to get together but I wish we could have gotten more young people out. I'm in charge of the family newsletter now so maybe I'll be able to help the younger generations get more excited about reunions and things...pump out some of that John Hancock exuberance...we'll see.
Posted by Nancy at 12:05 AM