How Lakhi you are!

I recently started a cross-stitch and I'm happy I did because today was such a gloomy day that I needed something mind-numbing to do. Up, down, up, down, up, down...very methodical...very soothing. It's been perfect. As my mom mentioned on her blog, not only did we learn some very disturbing news but we also had to bury our precious little Lakhi today. 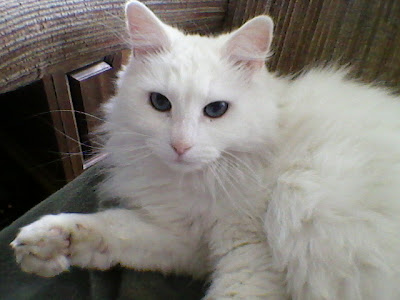 She died last night after presumably being hit by a car. We're not sure how she died, really, but my mom found her curled up under the car in the carport. She opened the door to let the cats inside because it was so stormy. Winter came in immediately but Lakhi wouldn't come. My mom called and called for her but she wouldn't come out from under the car. That's when she realized that Lakhi was probably dead.

It was David who got stuck with the unsavory task of fetching her out, her body stiff with rigor mortis, blood trailing along behind her. How she got back home after sustaining such an injury is a mystery—the car Lakhi died under hadn't been moved in hours and was not the car that hit her. I know this because the car was already parked in the car port when we went to the park yesterday. We stopped to say good night to the kitties on our way home and they were both alive and well then.

Lakhi was the sweetest cat I've ever known. I didn't get to share the house with her for very long—she and her seven siblings were born less than a month before Andrew and I got married. Two of the kittens died shortly after they were born, leaving us with six kittens to take care of. They were all so adorable and fluffy that we quickly were left with only one and we decided to keep her. Josie named her Lakhi.

We went to the library yesterday and one of the books the girls picked out was Did I Ever Tell You How Lucky You Are? by Dr. Seuss. We happened to select it for story time this evening. I think this was the first time I've read it but it was the perfect story for me to read today. It tells about all these ridiculous things that people have to do—like mowing quick-growing grass that grows as you mow—or tells of quizzical beasts whose tails grow in unsolvable knots or of unfortunate and forgotten left socks. It ends like this:


Thank goodness for all of the things you are not! Thank goodness you're not something someone forgot, and left all alone in some punkerish place like a rusty tin coat hanger hanging in space. That's why I say, "Duckie! Don't grumble! Don't stew! Some critters are much-much, oh, ever so much-much, so muchly much-much more unlucky than you!"

I was lucky to get to love Lakhi, even if it was only for a little while. And I suppose all we can do in life is remember to count our blessings and realize that we are so, so lucky. We're blessed with a set of challenges to help us stretch and grow, but even more numerous than the trials are the blessings. The trick to seeing them is to not get stuck wallowing in our misery and instead look for everything in our life that's amazing. After all, there's always some critter that's much-much, oh, ever so much-much, so muchly much-much more unlucky than we.

PS. I think Dr. Suess is one of the smartest people I've never met.
PPS. Diana, I think this answers your question of whether we'd grab our own problems back if we got to throw our problems in a big heap and choose from all the available problems in the world. My unluckies usually end up being so good for me that the end up being lucky so I guess I've got to keep them all.
Posted by Nancy at 11:19 PM