Joseph and the Amazing Technicolour Dreamcoat

We took Rachel to see Joseph and the Amazing Technicolor Dreamcoat last night, which was amazing. It's her favourite show right now—she's been watching the DVD (starring Donny Osmond) almost daily and listening to the CD at bedtime (and throughout the day). She knows every song, nearly word-for-word, though she sometimes gets it wrong.

In Stone the Crows, for example, Rachel sings:

Joseph how can we ever say
All that we want to about you?
We're so glad that you came our way!
We went to Paris without you!

(We should have perished without you are the real words).

And she just can't get over the fact that sometimes the lyrics aren't words at all—they're just sounds: non-lexical vocables. That whole conversation went right over her head, believe me. When she first watched the DVD she said that she wanted to be in the children's chorus one day but she would learn all the words to the song so that she wouldn't have to sing "ah-ah-ah." Well, our little friend Emma happened to be in the children's chorus for the production we saw last night (in Herriman). 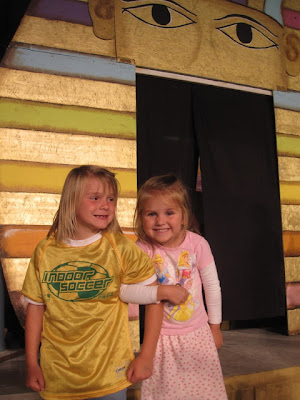 The show was so fun to watch, but perhaps even more fun was watching Rachel's eyes glisten as she mouthed the words to the songs. She was beyond thrilled to be watching Joseph live.

My favourite part was the TSA metal detector they pulled onto stage for the Who's the Theif?—they had all the brothers jump through it as their names were sung and then when Benjamin jumped through it at the end the metal detector went off and he was pulled aside by TSA to be searched. It was hilarious!

We left Miriam at home with Andrew's parents, which was perhaps unfair because Rachel isn't the only one who loves to sing along to Joseph. Miriam has been busy learning all the words, too, and if she's walking around the house mumbling under her breath, chances are that if you listen closely you'll hear her singing, "Go, go, go Joseph! You makey someday..." or chanting, "Ahead of my time!"

Yesterday when I put Miriam down for a nap, as per the usual. She is getting rather particular about rituals and will remind me if I forget to do anything. Lights off! Close closet! As I was walking out of the bedroom after laying her down with her blankey and dolly, Miriam called out, "Close 'e door, Mommy! Close every door to me!"

Anyway, the show last night was amazing...but we didn't get home until midnight. It didn't help that we went to the Cummings' house afterward for ice cream (thanks, Cummings!). Rachel was exhausted by the time we got home—she even fell asleep in the car! I never thought I'd see the day that Rachel would beg to go to bed. She didn't get in her jammies. She didn't brush her teeth. She just collapsed into bed.

Getting her up for her doctor's appointment this morning was a struggle.

The actual appointment was even more of a struggle but we powered through it.

She was so nervous after they weighed and measured her. She sat on my lap in the examination room just being nervous before she timidly asked, "What will the doctor say?"

"Doctor say!" she said and began gesturing wildly before continuing, "No more gunkies jumping on a bed!"

The look on her face was equal to or greater than the look of superiority on Hermione Granger's face when she answers a question correctly and earns 5 points for Gryffindor. She knew the answer to that question. Rachel was less than comforted.

Surprisingly, though, Rachel behaved fairly well for the doctor. She talked to him and let him look in her ears and throat. She wouldn't try the stethoscope—that was far too scary. We found out that she's doing just great. She's tall and thin (3 ft. 5 inchess, 34.8 lbs). We hear that every appointment and she may as well get used to it because if she takes after me she'll be hearing it for the rest of her life. The doctor mentioned that she should be learning her letters and colours in order to get ready for school next year.

She said she knew all her colours already and proceeded to list red and yellow and green and brown and scarlet and black and ochre and peach and ruby and olive and violet and fawn and lilac and gold and chocolate and mauve...

The doctor said he'd bring in a prize for her that she could have after she got her shots. And since she had told him about her princess birthday cake in great detail and was wearing a princess shirt he suggested that she might want a princess sticker. She did.

"I like Sleeping Beauty the best!" she said as he was heading out the door.

He came back a few minutes later with a whole stack of stickers.

And thus we see that even if you go through medical school you will graduate without knowing everything. Luckily Sleeping Beauty was one of the featured princesses.

He also brought in a pair of bracelets.

"I brought the pink one for you," he said, "Because I'm assuming that's your favourite colour. You can give the other one to your sister if you want."

Kidding she was—she has no idea what scarlet is. Or ochre.

Shoot—I don't even know what colour ochre is!

Anyway, then the doctor left and two nurses came in to give Rachel her shots. In order to be ready for kindergarten next year (did I just say that?) she needed to get 3 shots now and 2 shots next year or 0 shots now and 5 shots next year. I weighed the options for a minute and then tried to think of how I would restrain Rachel long enough for the nurses to give her five shots. No matter which way I imagined it my vision ended with her crashing through the door, leaving a Rachel-shaped hole behind her—cartoon-style. So I went with the first option.

I held her in my lap, but only after the nurses helped me expose her thighs, lock her arms at her side, and steady her legs. We all got kicked, hit, and head-butted in the process. It wasn't pretty.

There was much screaming and thrashing.

Miriam started sucking her thumb and pulling on her ear while she shrunk into the farthest corner of the room to witness the horror from a distance.

We ended up leaving the room with three gift certificates to a restaurant, two bracelets, five stickers, and a coin for the toy vending machine in the lobby. We went to the park after the appointment for play group and Rachel ended up asking to leave—she never asks to leave the park.

She was still dramatically limping around at bedtime.

We'll see what tomorrow brings us. A happier Rachel, maybe?