You may recall that last week Caitlin (from Cairo) was in Utah for her brother-in-law's wedding. She stopped by for a visit, which meant that I had to cancel the play date I had set up with Amy and Tommy. It was kind of a bummer to put that off for another week (though it was awesome to visit with Caitlin) because I was really looking forward to meeting Amy—we met online (accidentally) five years ago. She went to junior high school with a bunch of my high school friends and one day she was combing through facebook to reconnect with a Nancy that went to junior high with her (and high school with me).
She knew that Nancy had gotten married and that she didn't know her new last name so when she found my profile she added me as a friend. The other Nancy and I kind of look alike in that we are tall, thin, and brunette, so it was an understandable mistake—besides Amy hadn't seen Nancy since junior high. Then Amy found a link to my blog and realized that she didn't actually know me but she decided that we should be friends anyway. I concurred.
So we've been blog-stalking each other for five years and finally decided that we ought to meet.
And then I had to cancel on her.
Luckily we're such good friends that she was totally cool with it.
And then this week I got an urgent text from Jaehee saying that she was in town for her brother-in-law's wedding and only had one day to meet up. She wanted to meet up on Tuesday, which meant that I got to see Jaehee without canceling on Amy (which is good because I'm not sure how many times you can use the excuse of "my friend from Cairo is in town for a couple of days for her brother-in-law's wedding and can only meet me one day so I have to cancel on you, sorry" in a row without seeming suspicious).
We went out to lunch at Five Guys with Jaehee. 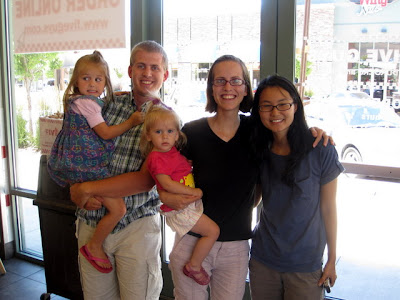 Before we went I asked Rachel if she remembered Jaehee, who was her nursery leader at church when we lived in Cairo. She said, "No, but do you remember there was a guy who juggles?"
That would be Aden, Jaehee's husband, who was also a nursery leader and who juggled frequently to stop the children from rampaging. It's his brother who is getting married but he wasn't able to get much time off work so he didn't come in until today and they're swamped with wedding stuff today.
Anyway, it was so nice to visit with Jaehee! She told us about her adventures in Boston (dental school), we told her about our adventures here (more graduate school), and we all reminisced about life in Egypt. 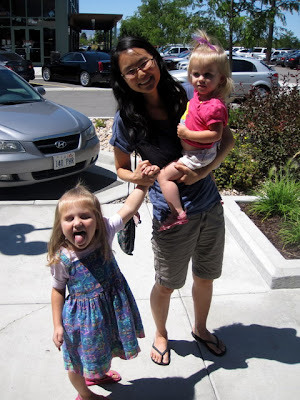 The good old days—when we'd hang out and everyone would assume she was my children's' nanny. 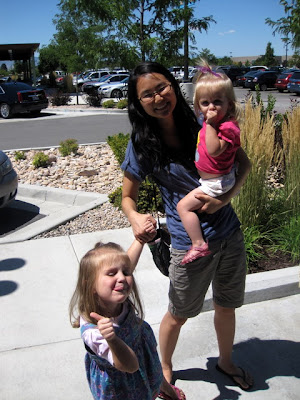 It was a quick visit but so worth it! Hopefully we'll see her again—maybe in Boston. I've never been to Boston in the fall...

Today Amy and Tommy came over. I was going to say that this was the first time I've met up with a complete stranger I met online. But that's not true—we met up with the Masons in 2008, and I'm sure there have been other examples.

Oh, even Jaehee is an example! We invited Aden and Jaehee to live with us while they looked for an apartment in Cairo before we'd even met them—after checking with a mutual friend to see if they were...normal.

Anyway, Amy and Tommy came for a visit today! They brought a big bagful of scrap paper for the girls to colour on (we'll be lucky if it lasts us a month), we played outside, and had some lunch together. 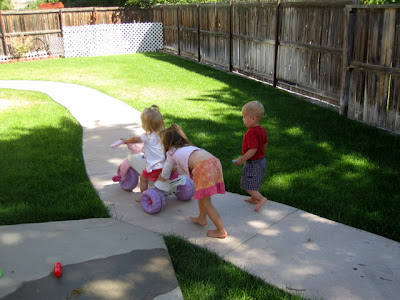 The visit was so comfortable—it was like Amy and I had known each other for years, which I suppose, essentially, we have. It was nice to put a voice to her face, though, and it was fun to see the kids play together. 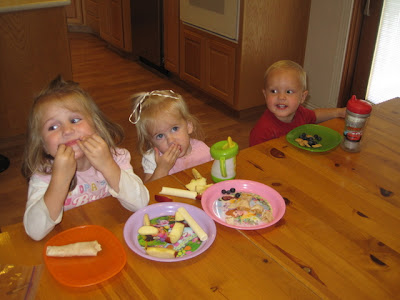 All too soon the visit was over and it was time to say goodbye. The girls had a little too much fun doing that but Tommy was a willing victim. 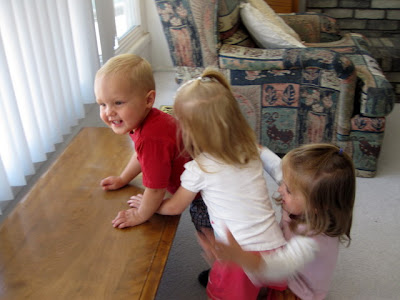 Look at that smile—he's such a stud! 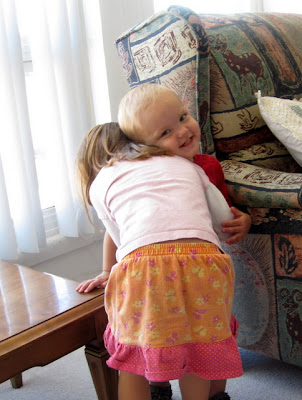 He probably got more action today than his whole life! 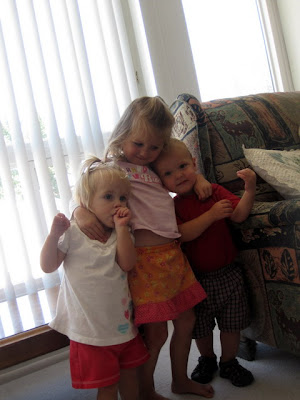 I had Rachel take a few parting shots of me and Amy together. This one worked: 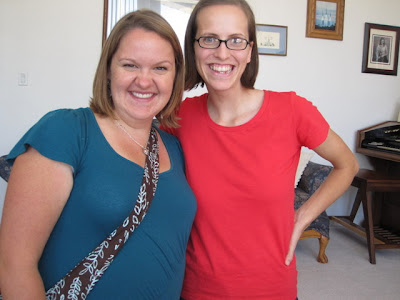 This one didn't (but it's the only picture we got with us and our babies): 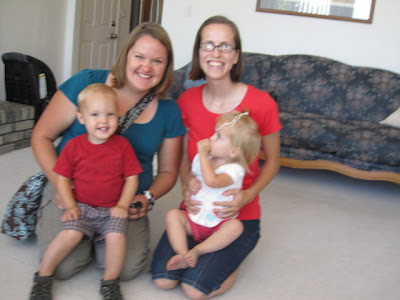 I think Amy and I grew closest together in 2009 when we found out we were expecting babies at the same time. Miriam and Tommy were born two and a half weeks (and half the world) apart!
Posted by Nancy at 6:22 PM