Miriam has gotten herself into lots of interesting places lately. She's discovered how to climb onto Rachel's bed which means she now has full access to both the radio and the headboard. It's not unusual to suddenly hear music blaring from the girls' bedroom only to walk in and find Miriam jamming out while balancing precariously on the headboard. 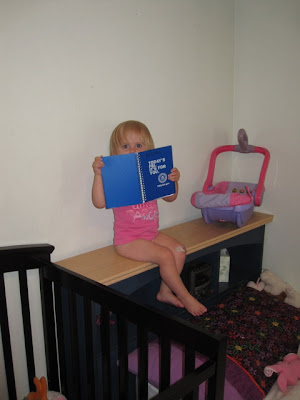 Here she is reading an FBI notebook. Andrew brought it back from DC and gave it to Rachel. 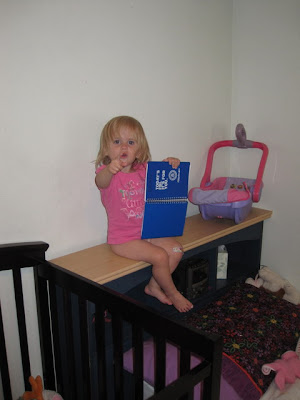 "Today's FBI. It's for YOU!" Meme says (actually that's what the book says).
This afternoon Miriam took down that doll car seat and was using it as a rocking chair. 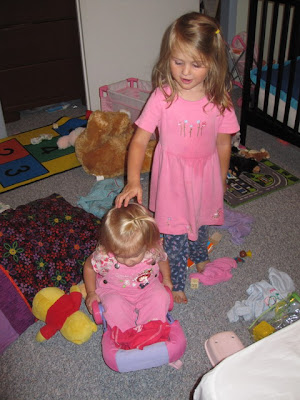 I came in with the camera and Rachel thought I was taking a video so she started singing and dancing to Twinkle, Twinkle Little Star. 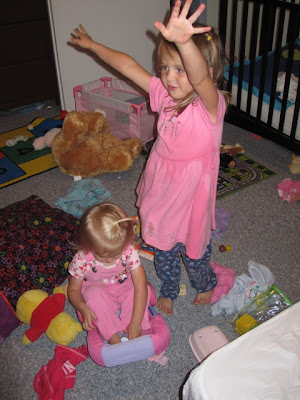 She does that all the time.
Anyway, that is not the only piece of doll furniture Miriam has used recently. She's gotten stuck in this doll stroller more times than I can count. In order to get her out we have to twist her sideways—I have no idea how she gets in by herself. Today Rachel was pushing her all around the house. 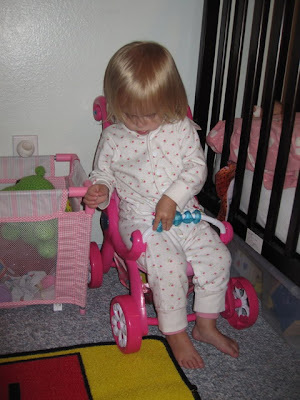 The doll crib is another one of Miriam's favourites. She can get both in and out of this crib and often I will find her in there all snuggled up with her favourite blanket and some toys or stories. 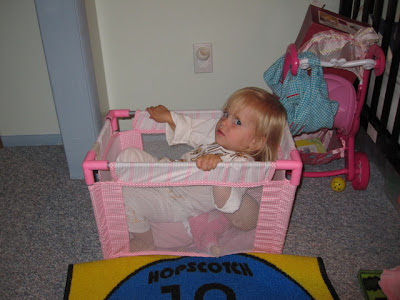 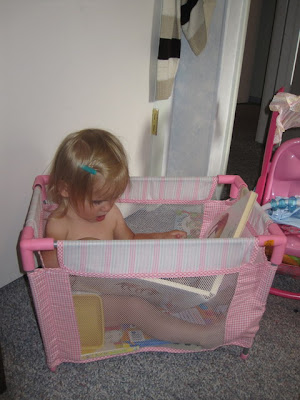 She's all about alliteration. Or assimilation.

This evening she wanted me to take a movie of her so that she could watch it (she was much more anxious about the watching part than the making part) and I didn't know what to have her do so I had her say monkey because it makes me laugh every time she says it.

Instead of "monkey" she says "gunky."

And speaking of gunky, here's my gunky monkey at the dinner table a couple of nights ago. 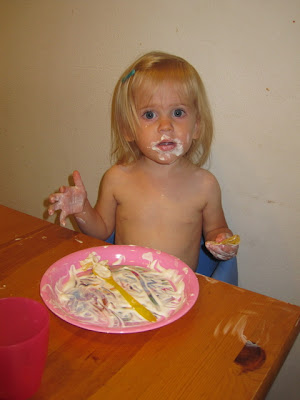 This was before dinner even started—I was still busying myself around the kitchen but had already put the sour cream on the table, with the lid off. Miriam climbed up to her chair and gave herself a heaping helping of sour cream (which she calls ice cream). 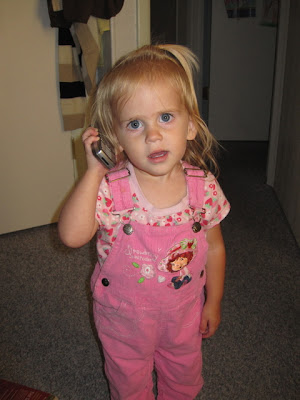 And here she is today, gabbing away on a toy phone and wearing the outfit she helped pick out this morning. She's in pink Strawberry Shortcake overalls with a pink strawberry shirt.
Posted by Nancy at 10:24 PM