We think we have a name for our little boy. We have gone through a ton of names in the past week or so—a ton of names—but couldn't come up with anything we agreed upon. And then, against my better judgement (due to its trending popularity), I added Benjamin to the list. We tried it out for a few days and it just felt right. So Benjamin it is. Benjamin Thomas.

It means 'son of my right,' and while most baby name websites (and wikipedia) say that it is technically derived from Hebrew I don't necessarily think of it as a Hebrew name. In Aramaic, for example, the name is Biniam. In Persian, Benyamin. In Arabic it's easy to see both 'bin' (for son) and 'yamin' (for right) as well. Sometimes when people hear Rachel and Miriam together they automatically think we're on a Biblical/Hebrew kick—and we kind of are, I suppose—but really we're looking for names that translate well into Arabic. Rachel is the most difficult; everyone seems to call her Rasha (sounds like Russia) but a few (usually very Christian individuals) would recognize her name and call her Raheel. Miriam is very Arabic, only we chose to go with the typical Western spelling instead of Maryam.

That's important to us because we've spent a lot of time in the Middle East and hope to spend a significant part of our future there as well. Andrew obviously enjoys studying Arabic and one of his criterion for name-picking, it seems, is that it would work well in the Middle East. At the same time, I just can't bring myself to go with anything like Moustafa or Tahrir (both those names came up) because our children are so undeniably Caucasian I would just feel weird including such a foreign-sounding name. Miriam's middle name is 100% Arabic but she was at least born in Egypt so that explains it all away. Can you imagine trying to explain to someone why your middle name was Tahrir?

Oh, because my dad liked Middle East stuff...? That just sounds like a lame story compared with explaining that your middle name is al-Noor because you were born in Egypt.

So Benjamin Thomas it is. Thomas is Andrew's middle name so we're passing it on (unless by some miracle Andrew is able to convince me that we should go with Tahrir).

We've been having a lot of fun with Benjamin's name already.

We've joked about calling him Sonjamin or Benright. And when he's naughty we'll call him Ben-shamal (son of my left). Or we could always just sing that line from Joseph and the Technicolour Dreamcoat: 'Benjamin, you nasty youth!' Then there's the Curious Case of Benjamin Button, which is simply perfect for saying the million times we'll have no idea what's going on in his little mind.

"You're a curious case, Benjamin." I can just hear myself saying that now.

Andrew likes Ben. I prefer Benjamin. But I love nicknames and I'm alright with calling him Ben, though for the first few years of his life I'm sure I'll call him Benny or Benji or even Benny-bean or Benny-boy or J-man. Something will catch on, I'm sure. But once he gets to school? Definitely Benjamin...or Ben...whatever he prefers.

I just like something longer to go with our last name.

"Ben Heiss, that sounds nice!" Andrew said (quite poetically, I might add).

I think Benjamin Heiss sounds better. Our last name is so short it needs a multi-syllabic first name to even it out. But, like I said, I'm fine with Ben.

We've begun using the name Benjamin in front of the girls when referring to the baby—we tried not to for a few days but as the name sunk in with us we just started saying it and now they both know that we're planning on naming the baby Benjamin so I think we're fairly stuck with it at this point. There's no going back—unless we really want to confuse the girls!

I'm excited to have a name for our baby—now I can really get used to the idea of having a boy.

Rachel snapped this picture of me at the park today—I'm 22 weeks and compared to my pregnancy with Rachel I am huge already. My cousin Jenna is planning on sending her maternity stuff out to me and I'm rather excited for that because I didn't have much at all for Rachel and with Miriam I had mostly long-sleeved things because I was in the Middle East. I don't have to wear long sleeves and pants all summer long with this pregnancy because we're in America this time! 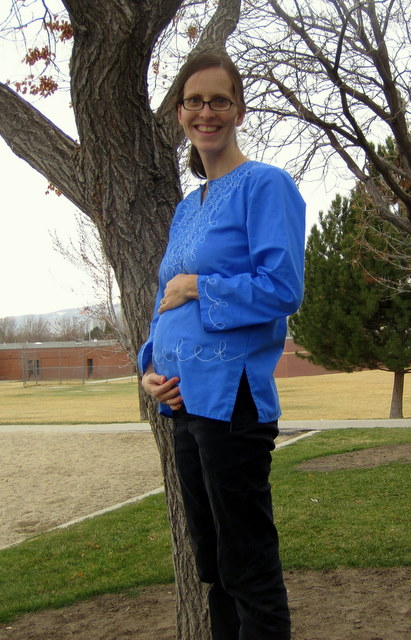 I should really find a picture of me at about the same stage with Miriam but that takes far too much thinking. Rachel's birthday and Benjamin's due date are so close together that I know exactly when I was 22 weeks along with Rachel—because it was almost exactly the same date five years ago.
Posted by Nancy at 12:59 AM