There's a storm system making its way across the country—from crazy snow storms to flooding and tornadoes to crazy warm weather, there isn't a corner of the nation that will be left untouched.

And that's exactly the thing I want to hear when my husband will be taking four different trips across the country this week. Perfect timing. He said they left the SLC airport late last night because they had to be deiced before taking off. Hopefully his flight home will be as uneventful as the flight to Indiana.

The night before he left (so Saturday night) we were checking the weather before going to bed. I really enjoy checking the weather. My top five cities to check are Orem, UT; Cairo, Egypt; Bloomington, IN; Durham, NC; and Lima, Peru. Jacob's on his mission in Peru and the reasons I check the other places should be rather obvious. Anyway, Andrew went out on Saturday night to fill up the car so that we'd have enough gas to get to the airport. It was warm out and it was nearly midnight. And we hadn't seen a drop of rain.

We were beginning to wonder if the forecast was going to change. That's why we looked it up.

"Wunderground said it was 49 degrees," I said.

You know when you call something the wrong name in your head even though you know no one else calls it that and it's completely wrong? This was one of those times. Like The Mikado? I always refer to it as The Minnekado in my mind—because I grew up by a nice forested area called Minnekhada. One day I'm going to say something like, "I love The Minnekado!" and everyone's going to marvel at how stupid I am. Anyway...

"You do know their URL is 'double-u' underground, right?"

"No way!" I gasped. "That totally makes sense. I mean, it is Weather Underground so I can see how they'd get W-underground from that. But I've always just said it wunderground."

And I probably always will.

Last night we got at least six inches of snow—on the grass. It wasn't that deep on the cement or deck, which was fortunate for Miriam because she's afraid of the deep snow (and dislikes snow in general). It took quite a bit of cajoling before Rachel was able to convince Miriam to join her in a romp through the backyard. I hear that up in the mountains they got several feet of snow—I have a friend skiing up at Sundance today and he reported on facebook that they had 37 inches of fresh powder (I have no interest in verifying that claim so you can take it or leave it).

Miriam had put shorts on this morning. I said, "Miriam! It's so cold and snowy outside! You need pants today!" She said, putting her shorts on, "No. Just not will I go outside. It is okay!" 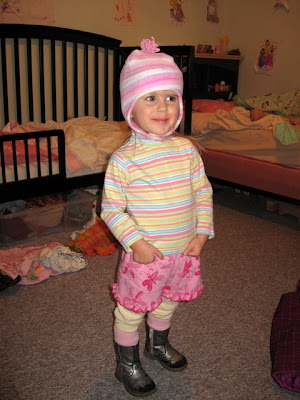 The only way I could get her to put pants on was to agree to put the shorts on over top. She is stylin!

They had fun tramping through the snow and breaking ice off the railings. They followed a trail of footprints that a dog had left behind. And then I came outside and Rachel asked if I wanted to have a snowball fight. I told her no way—that girl has killer aim and I didn't want to have multiple balls of snow wind up hitting me in the face for some reason. But I'd be willing to help her make a snowman.
We played around for a few minutes and I took a few pictures of the girls having fun. 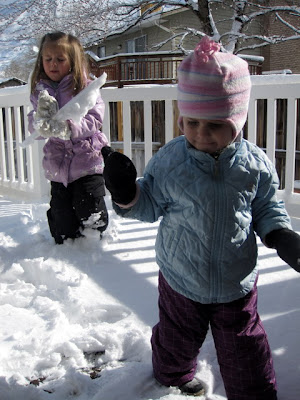 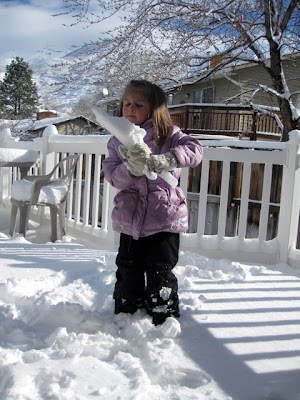 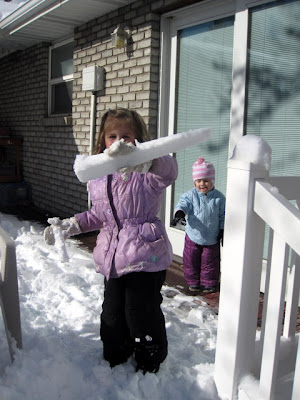 I rolled a snowball while Rachel made a snow angel. 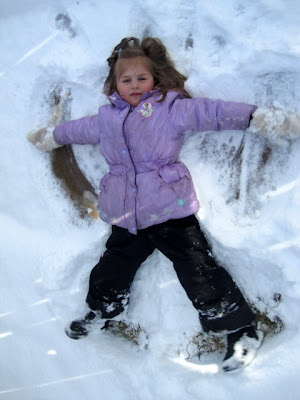 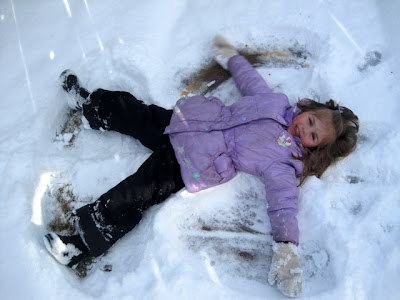 Then Miriam thought she'd try making a snow angel, too, but her gloves flew off and she got really sad. 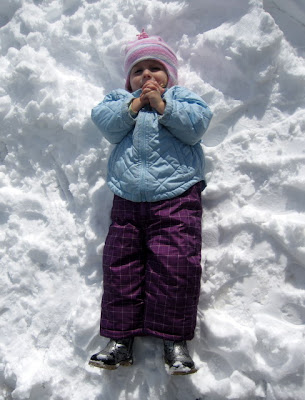 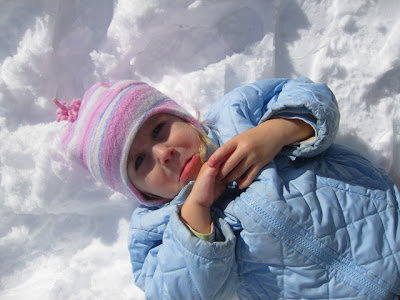 So she went inside and Grandma curled her hair while Rachel and I finished up with our snowmen. Rachel attempted to turn herself into a snowman. 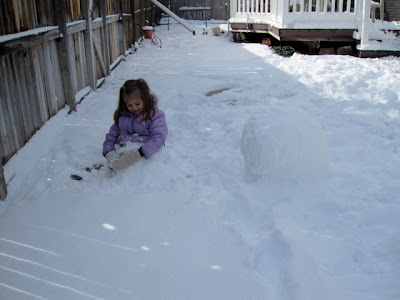 It got easier to roll snowballs as the sun warmed things up. The snow was a little powdery and difficult to work with at first but by the time we made our second snowman we'd just have to flip the snowballs over a few times and suddenly they'd be a foot in a diameter.
We made the big snowman first and the baby snowman second. Rachel found a twig to be a "smokey-thing" like Frosty has. I didn't point out to her that babies don't usually smoke pipes so if she was going to be calling it a pipe she probably didn't want to be calling the snowman a baby. Whatever. 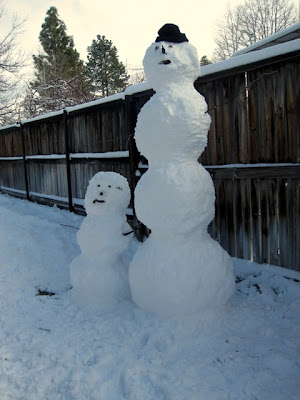 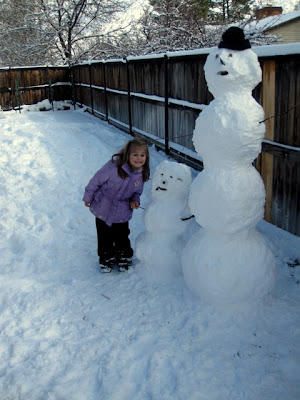 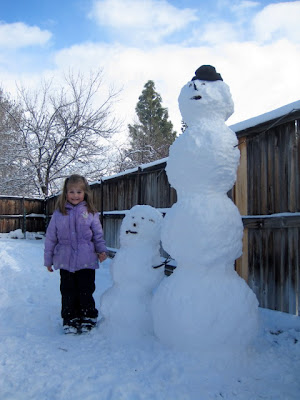 And here I am with our snowmen: 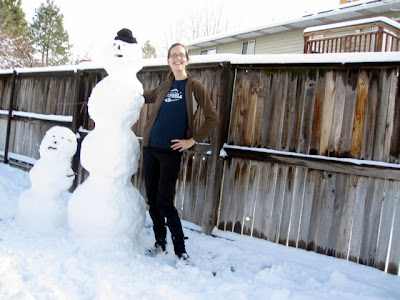 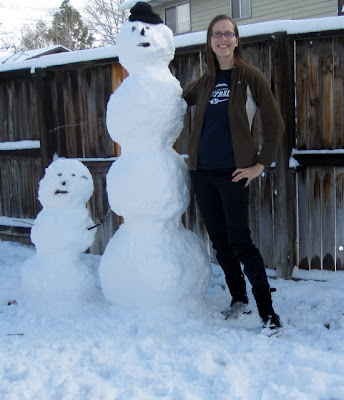 Miriam peeked her head out the door to look at them but she had no desire to actually go outside and meet them. Yuck—there's snow out there! She is a girl after my own heart.

I will say, though, that I prefer spring snowstorms to winter snow storms. It's already warming up and melting outside. The sky is blue, the sun is warm. It's quite beautiful. When you get a snowstorm in the dead of winter the snow is going to stick around for a long time—you'll have to shovel the driveway—the sky will be overcast and the air will be full of bitter cold. Yup. Springtime is a lot better than winter!
Posted by Nancy at 1:49 PM