In which we turn into socialites

The girls both wore "Princess Leia" hair to church on Sunday, in honour of the movie night they had with Dad the night before. Since I'm too lazy to actually make cinnamon bun-style swirls on the sides of their heads (not that they have enough hair for that, anyway) I just pull their pigtails through halfway and call it good. They're happy. I'm happy. We're all happy.

After church Miriam was admiring the bracelet that I wore so I pulled out a little baby bracelet that Rachel's friends Isabelle and Eliza gave to her before we moved to Egypt. Rachel never wore. She's never been too fond of jewelry. Miriam, on the other hand loves jewelry and showed it off to everyone. 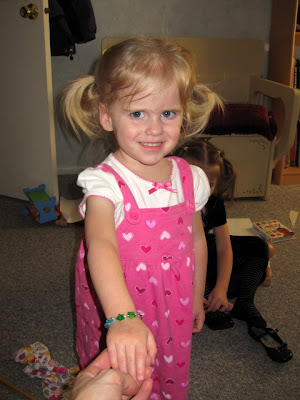 We entertained the idea of walking to church but it was still too cold in the morning for that (in my opinion) so instead we walked to choir, which we have late in the afternoon. It's at the church building now instead of being at our house, which is at once convenient and inconvenient. Our family has been so sick from Christmas until...like, now...and with so many sleepy, sick people in our house it was nice to not interrupt nap time (or lounging in pyjama time, whichever it happened to be). But now that it isn't in our basement we actually have to make an effort to get there on time. 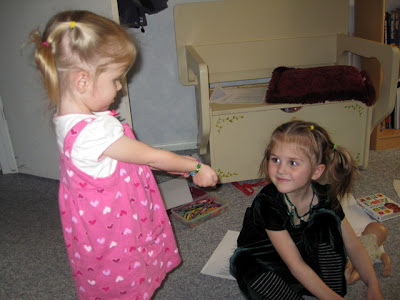 On the way to the church we passed a big rock pile that Rachel wanted to climb but I told her that she'd have to do it another day because I didn't want her climbing the rock pile in her nice Sunday clothes. She was a little disappointed but I assured her that the next time we passed it wouldn't be too far off in the future. So, guess what she did this afternoon on our walk to and from the park... 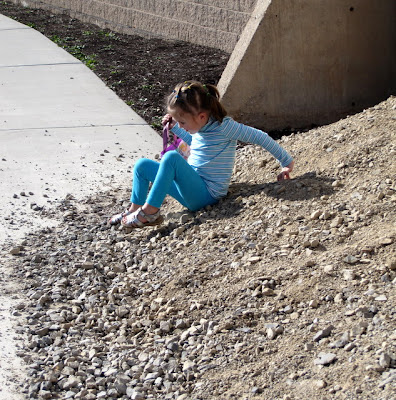 Anyway, after choir we rushed over to a dinner that some of Andrew's friends in the MPA program invited us to. Jenny and Jenny hosted it at their apartment and they made hummus and pita and some yummy vegetables. Leli and her roommate brought chicken. I had completely forgot that we were supposed to bring something to go along with a Mediterranean theme until Andrew reminded me at lunch. I had just made some peanut butter/yogurt dip (50% peanut butter, 50% yogurt) for some apples and Andrew openly mocked me, saying that mixing peanut butter with strawberry yogurt should be illegal. I told him that Pinterest told me to do it and admitted that I was skeptical at first but after so many friends repinned it I finally broke down and tried it and—lo and behold—it was actually pretty darn good.
I made him try it. He was converted instantly and we decided that even though it wasn't Mediterranean we'd bring it to the dinner anyway, along with some apple slices. Everyone marveled at how good it tasted and how easy the recipe was—it's surprisingly creamy and fluffy and fruity and nutty all at the same time.
It was definitely a fun evening, though I think my favourite part was when Jenny brought out one of her hexbugs and showed it to the girls. A hexbug is just a little vibrating robot with a rubber casing but it moves exactly like a cockroach. In fact, it mimics the movements of a cockroach so perfectly that I was fighting the reflex to run for the can of Raid.
She had both girls crouch down on the floor around the bug and then turned it on. Rachel thought it was awesome. Miriam crawled across the room as quick as a flash and hid her head under her arms. It was hilarious!
This morning we had a bit of a lazy morning—we slept in a bit because we're still thrown off by daylight savings time and then we ate breakfast and did a few things around the house—until it was time to go to lunch club. We've never gone before but Karen invited us out as her treat.
There's a woman in the ward (who actually isn't in the ward because she moved) who hosts a lunch club once a month, just as a chance to get together with friends. It was at the Paradise Cafe—a little soup, salad, and sandwich place that everyone kept saying was very similar to Kneaders, thinking that I would know exactly what they meant. I didn't, though, because I've never been to Kneaders (although my visiting teachers occasionally drop off loaves of bread from there—often enough that I know I prefer their pumpkin bread to their apple bread). It was good though.
My girls thought it was terribly boring. They both developed mysterious stomach aches and asked to be taken to the bathroom multiple times. I finally asked Rachel why her stomach hurt and she said, "Well, I think it might be from the cheese in my sandwich...or it might be that I just really want to go home."
"If you want to go home," I suggested, "How about letting me eat my food instead of making me take you to the bathroom every two minutes upon threat of vomiting all over the table?"
All of a sudden I was able to eat my lunch in peace. And then we left and the stomach aches magically disappeared.
"I have to go home and work!" Grandma said on the way home. "Enough playing for the day."
"That wasn't playing. I didn't even have fun!" Rachel pouted.
"Well, I had fun," Grandma said.
"That was fun for you?" Rachel asked. "Well, grown ups might have fun just eating and talking but kids don't and I want to play more today!"
We told her that should could. And she did.
It was actually rather nice that she was in a playing mood. When we got home I checked my computer and found that Andrew had tried chatting to me about a half an hour before. I told him that we had gone out to lunch (he already knew that but I guess he forgot) but that we were home now.
"Do you want to quickly edit something for me?" he asked.
I said sure. For some reason I figured "quickly edit" would mean that it would be something that would be quick to edit. What it actually meant was that he and his group had decided to turn one of their papers in to a contest and the deadline was in four hours so I needed to edit it quickly. It was no short paper and a few sections of it needed to be reworked pretty hard. I ran through it twice before Andrew got back to rewrite some of the parts and then I read it through as he was editing it and made a few more small changes. Then he quickly threw it into InDesign, printed it out, and handed it in.
And then they told him that they'd decided against accepting group papers so they weren't going to accept it.
It took a little cajoling but in the end it was accepted for submission (the least of reasons being that they had asked prior to fixing up the paper if co-authored papers would be allowed and were told they would be). Everyone was happy about being able to submit it because we had worked on it all afternoon.
To celebrate, I took the girls to the park. Miriam was so excited about the swings! 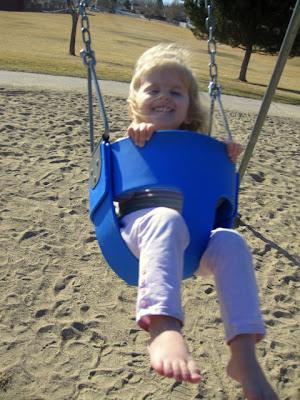 She also finally conquered the ladder leading up to the slides (that first step is a doozy)! Hurrah for independence!
Rachel enjoyed playing in the sand—she built Y Mountain and then wrote YBU in huge letters and said, "Look, Mom! I spelled BYU!"
And I said, "Wow! Good job!" because I didn't have the heart to tell her that she'd actually spelled YBU. 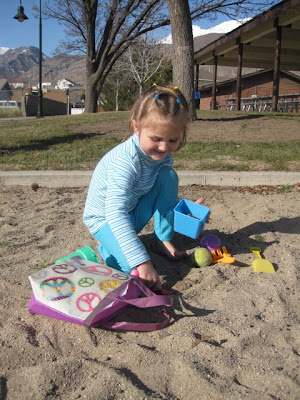 Naanii saw us walking to the park (she was driving home just as we were turning into the park) and came to join us. She played catch with Rachel for a while and it was fun to just get to talk with her.
Tomorrow I'm hosting playgroup at our house.
After a dinner on Sunday and a lunch on Monday and playgroup on Tuesday this little introvert might just curl up and die...here's hoping I survive tomorrow.
Hosting is so much harder for me than attending things.
Posted by Nancy at 12:48 AM