My parents invited us (the girls and I—since Wednesday is one of Andrew's late days) over for Pi Day. Dinner would be involved and, of course, pie. The girls and I went to the park before heading over to Naanii's house and it was a lot colder than we thought it was going to be. The girls had been dressed up in spring clothes all day long because it was so sunny out but I'm glad that I made them put on pants and sweaters before we left the house. We were freezing!

We still had a good time at the playground, though. Miriam loved the swings and stayed in them for at least half an hour. Rachel practiced pumping on the big-kid swings—she's getting pretty good at it.

Rachel asked me if I could climb a particular tree. I told her that I probably could but that I didn't exactly feel like doing it with my burgeoning belly. So instead I helped her climb up. She was terrified and elated at the same time—and, yes, her shoes are on the wrong feet. 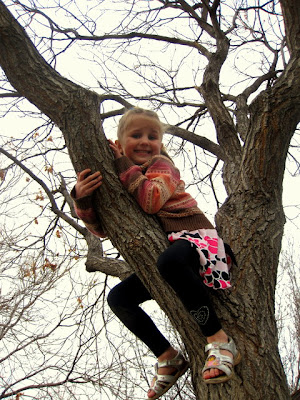 After a few minutes of sitting up there she realized that she wasn't going to fall any time soon so she relaxed a bit. The branch wasn't too high but it was higher than my head so it was fairly high. 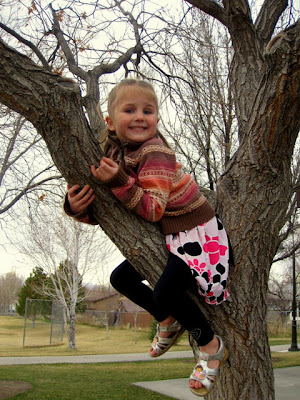 Miriam, who had been busy running a circuit between the slide and the ladder, noticed what Rachel was doing. She wanted to do it, too. She's a little monkey. Or a parrot. Or a mimic octopus. Or something along those lines. 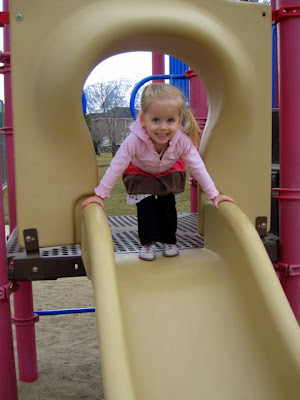 I put her up in the tree and held on to her. Then she asked for a picture so I let go with one hand and took a picture. 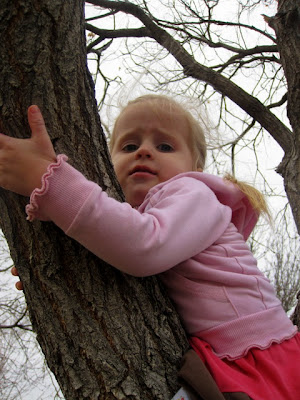 But she had already seen the pictures of Rachel in the tree and wanted one just like that so she asked me to let go and take a picture. I told her to wrap her arms and legs tightly around the tree and hang on for dear life. She did. And I snapped a quick picture before taking her down. She looks a bit nervous, don't you think? I was, too. And, yes, she's wearing socks with her sandals (I found them in the diaper bag, which was a lucky find because her poor toes were so cold). 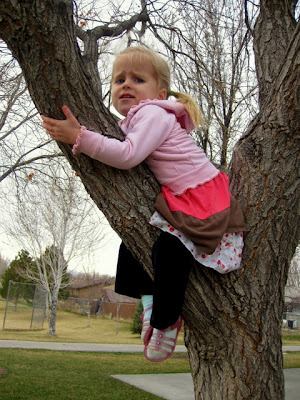 Then we played a complicated game of catch in the sand that Rachel made up. She drew a bunch of lines and circles in the sand in if the ball landed here then I got a point but if it landed there then she got a point. I was never really clear on the rules but suffice it to say that Rachel got a whole lot of points while I got very few. It was still fun...I guess.
Miriam, meanwhile, played on the slide again for a little while before running over to our blanket so that she could cuddle up like a "burrito baby" because she was cold. She watched us play our bizarre ball game. I think Rachel actually took this picture right after we finished playing. 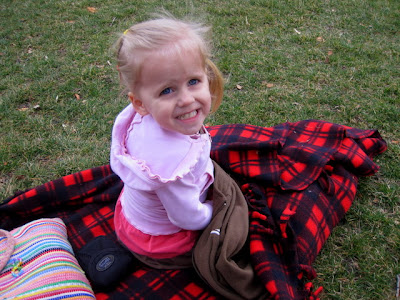 And then she asked that I take a picture of her. It's kind of a goofy pose but at least her shoes are on the right feet this time! 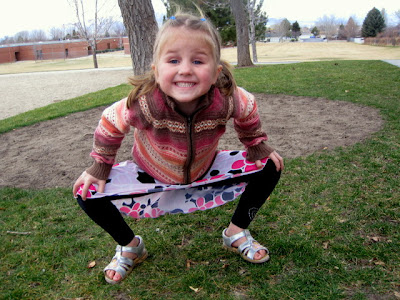 We were so happy when my mom called to say that they were home—I wasn't expecting them to be home for at least another half hour—and asked whether we were planning on walking over or what. I told her that we were already at the park and that we were freezing so we'd be there sooner than she thought.

When we walked in, Miriam showed off her dress to Naanii—it's size three but she pulled it out of the 2T/3T box when I was trying to put 2T things into her drawer. It's one of Rachel's old things. Anyway, Miriam twirled in her dressed and basically begged Naanii to compliment her.

"That is a beautiful outfit, Miriam!" Naanii said. "You sure are wearing a lot of clothes today!"

And she really did—at the time my mom said this Miriam was wearing a t-shirt under a dress (that had sleeves) and a skirt with pants underneath. And that was her fourth or fifth outfit of the day. I frankly can't remember. She changes her clothes more than anyone I know.

Grandpa Bruce picked up some pizzas for dinner and we had cheesecake with cherry pie for dessert. We played for a while and coloured for a while and talked for a while and then it was time to go home where Grandma had a big banana cream pie waiting for us! Pi day sure is tasty—who knew math could be so delicious?
Posted by Nancy at 11:57 PM