Rachel loved this class so much and has asked to be signed up for another one. She listened attentively to the lecture, raising her hand to tell everyone that she's been to a mosque and naming animals that live in the desert and so forth. She was very patient—I was impressed. She'd just raise her hand and smile politely until she was called on. She had a lot to say but kept getting called on since she kept saying relevant things. Rachel knows a bit more about Islamic culture than the average four-year-old living in Utah County.

Right now at the museum their main exhibit is Beauty and Belief: Crossing Bridges with the Arts of Islamic Culture. Andrew went around examining all the Arabic since he's the one who did that part.

Rachel listened to the story while Miriam climbed on pillows and looked out the window at the band children toting their instruments—there must have been some sort of competition going on.

Since we were talking about animals and fables today we played charades and then after we'd guessed whatever animal it was that the child was acting out we went around the exhibit to find that animal. While we were listening to our guide tell us about a statue of a cat I ran into my friend Kristen—I haven't seen her in ages—and started talking to her and Andrew and I kind of didn't even notice that Rachel had volunteered without being called on until the guide said, "Oh, and I guess Rachel's coming up here, too."

It worked out. But we'll definitely remind her (once again) that she needs to wait until she's called on before she rushes up to the front (this is a major problem in our primary with all the children so it's kind of something we talk about weekly).

She got to act out a griffin (with three other children). If you think she was pleased with that assignment you'd be grossly underestimating her excitement. Need I remind you about Gryffindor House? While their emblem is a plain old lion there is still that magical connection to the griffin and Rachel certainly picked up on that.

Anyway, after guessing, finding, and discussing several animals in the exhibit we went to the art room to create our own work of art. The kids got to make animal mobiles—they painted animals with water colours and then attached them to a crescent and put sequins on it. My girls have never seen such a smorgasbord of art supplies all at once in their life—glue and scissors and paint and markers and sequins and pencils and ribbons and paper and all at their disposal. It was like heaven.

Rachel painted a griffin, a turtle, and a rabbit. 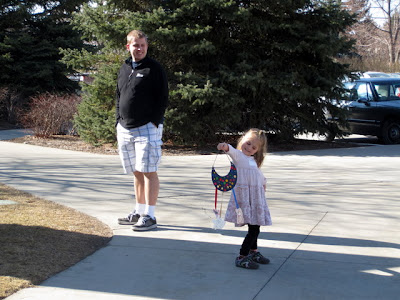 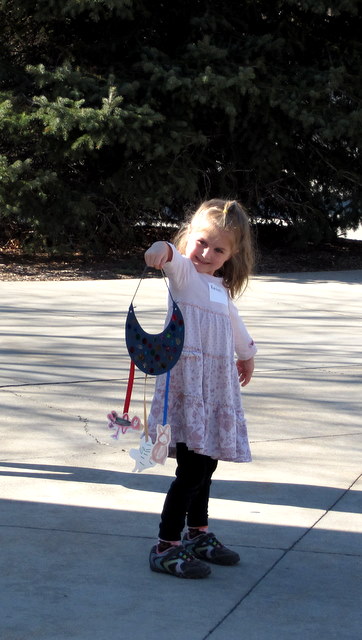 Miriam painted a cat, a mermaid, and a caterpillar. The caterpillar is my favourite because neither of the girls can say it. When we got to the car Rachel asked her if the green animal (just a bunch of green circles painted in a straight line with a face) was a worm.

"Oh. I think you mean a callipitter," Rachel said.

"Yeah, that!" both girls said. 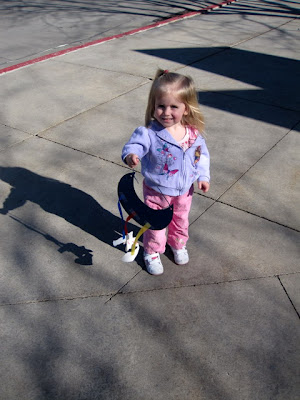 And here's a final picture of Miriam running to catch up with her daddy and sister: 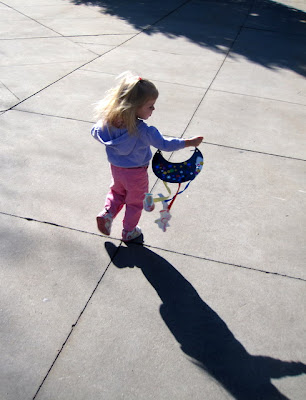 This child is forever playing catch-up but I suppose that's what you do when you're not the oldest. Technically Miriam's too young for the Second Saturday programs—you're supposed to be between 4 and 9 years old—but it's a family program and they were totally fine with letting Miriam jump on board with the craft and she loves to sit next to Rachel and mimic what she does. Hopefully they don't mind...
If you're interested in Second Saturday's "Art Tales," you can find more information here.

(Ahem, Bonnie—we should totally talk to each other before you sign up Amy (assuming you're interested) so that we can sign up for the same session!)
It was great fun, quite educational, and completely free!
Posted by Nancy at 1:30 AM