Yesterday we went to the park.

On the way we walked past a lawn that had recently been aerated so there were little dirt pellets all over the lawn (and sidewalk). The girls both initially thought that they were doggy doo-doo. I was only able to convince Rachel that they were just dried chunks of dirt. She picked one up and used it like sidewalk chalk. She wrote her name, which got us onto the topic of names. We talked about names for a long time. 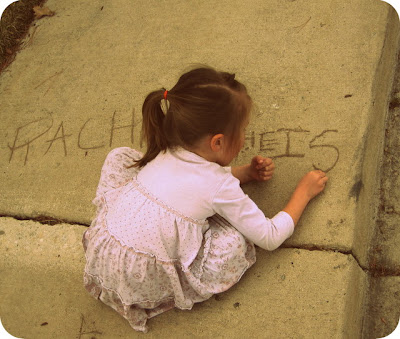 (PS. I updated Picasa and now they have all these filters that you can apply to pictures so I was playing around with them last night—these two have the 60s filter on them). 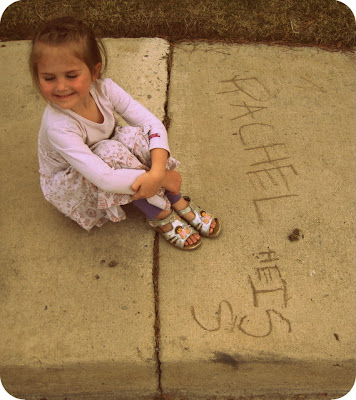 She skipped away from her graffiti, laughing about how whoever sees that is going to read it and say, "Rachel Heiss? I wonder who that is."
Joke's on her because the lawn we had just walked past was two houses down from ours and they definitely know who Rachel Heiss is.
Rachel wanted to be reminded about what her middle name was. She also wanted me to tell her the middle names of everyone in our family. Rachel really likes her middle name—Anneliese. Miriam liked her middle name for a while—it's al-Noor and is pronounced a-Noor and Sleeping Beauty's name is Aurora and they sing that song "Hail to the princess, Aurora!" only Miriam can't say Aurora so she definitely says Anoora so she thinks it's the same name. Eventually...somehow...she got jealous of Anneliese, though, and wanted to be "Lesia, too!"
Rachel told me that when she starts getting pregnant and having babies that she's going to have two girls and then a boy and she's going to name them Anneliese, al-Noor, and Thomas.
I've almost won the Thomas/Tahrir debate, by the way. I challenged Andrew to say "Benjamin Tahrir Heiss" ten times fast. Try it. Even just once. Tahrir Heiss?
It shouldn't be said. You're going to end up spitting all over everybody.
Then Rachel wanted to know what her middle name meant. I told her it meant "graceful light" because Anne/Anna means "grace" and Liese means "light."
About an hour later we were walking across the school field and she pointed up at the sky and yelled dramatically, "Anneliese!"
"What are you talking about?" I asked her. "Why are you pointing at the sky and yelling your middle name?"
"Mom," she explained, rolling her eyes (because how stupid could I be, right?) "The sun is a graceful light."
They were both rather brave at trying the new equipment at the park (this wasn't our first time at this park but it's been a while—months and months at least). Miriam was even going down the tallest slides by herself and eventually requested that I stop catching her because she can do it herself—I told her she could only go down the slow, twisty slide because she has half a hope of stopping herself on that one before she flies off the end. 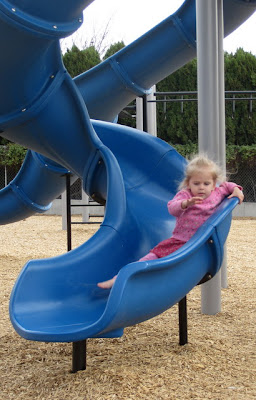 The other tall slide makes for a much faster ride. 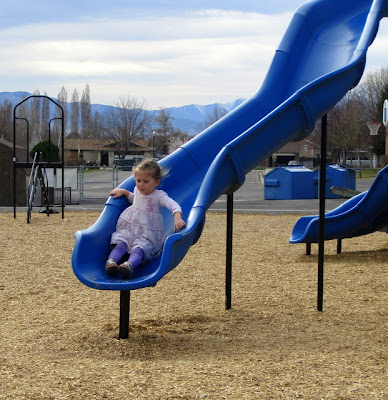 Miriam eventually went down that one by herself, too, but she went right after Rachel (and I asked Rachel to sit at the bottom so that she could "catch" Miriam without catching her). She came speeding down the slide, looking rather terrified, and then announced, "Wow. That was scary! But...I did do it all by myself!"
She didn't try it again.
I love watching my kids try new things because they're just too silly. For example, Miriam crawled across this bridge the first time she went across it but decided it was safe enough to walk across the second time around. I'm not sure how crawling makes things safer... 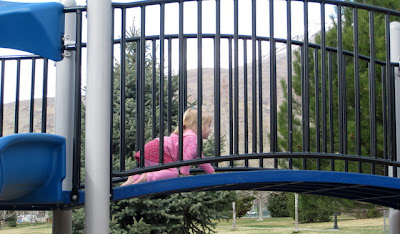 And the look on Rachel's face here kills me: 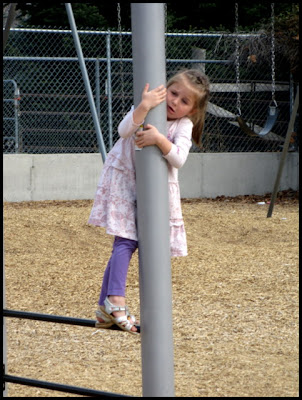 Watching them gain confidence, though, is fun. 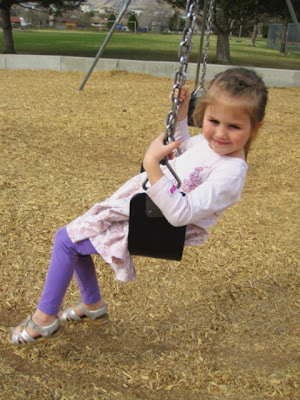 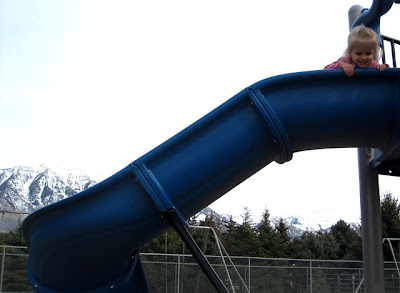 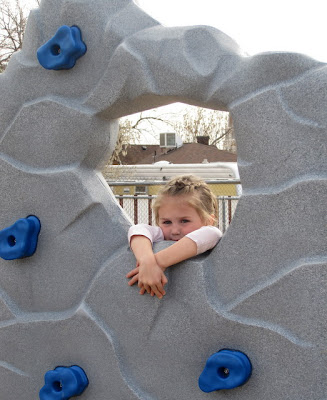 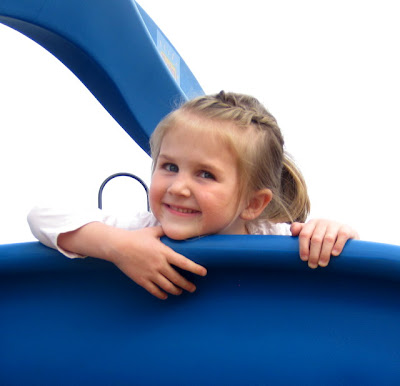 Before we left the playground the girls walked along the little wall surrounding it. Rachel asked if this "curb" was like the curb in Egypt when I dumped her out of the stroller and into the street. I told her that it was (because it's more like a wall than a curb). At least she'll never have to wonder if I'm a perfect mother or not because she knows full well that I dumped her into on-coming traffic as a baby. This is one of her favourite stories to hear—she asks me to tell it over and over again.

We went to my parents' house for dinner because my sister Kelli and her kids were supposed to be stopping by. It was the twins' birthday on the 23rd (they just turned 6!) so my mom had gotten a birthday cake for them and some hot dogs for dinner. My girls were excited because it was their second birthday party of the day—their friend Emily's birthday is today but she had her party on Saturday.

It also happened to be Holi this weekend, though, so everyone was still at the Spanish Fork Hindu Temple doing that. I've always wanted to go but never have...but they do a Holi Festival at UNC (Andrew saw it when he was in North Carolina) so if we move there then I might still get my chance! 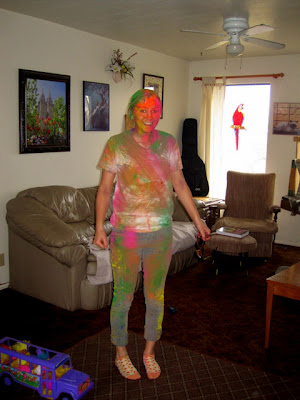 The girls were rather terrified of her, yet curious at the same time.
Josie was no match for Kelli and her crew, though. When Kelli, Allen, Rosie...and her friend who was introduced to me as Giggles...Matthew, Andrew, Steven, Olivia, and Sabrina showed up Rachel and Miriam all but ran and hid. A whole troupe of aliens had walked right into their grandparents' house!
Kelli et. al. had been at the festival the whole live long day and so they were coated in layers and layers of powder. I only got pictures of them after they'd all done a little bit of a scrub down in the bathroom so they look a little more decent than when they first walked through the door... 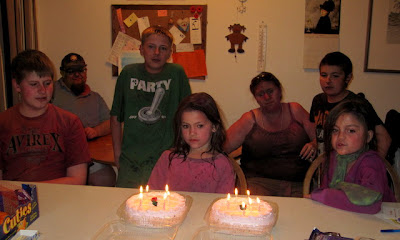 Poor Olivia and Sabrina were so exhausted. Olivia even forgot to blow out her candles when we had finished singing! Here's Sabrina blowing out her candles: 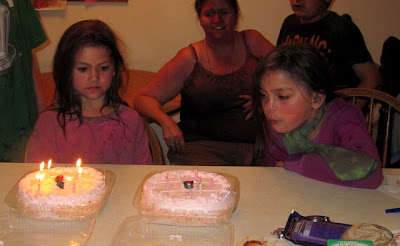 And now Olivia—who took three or four tries before she got them all out: 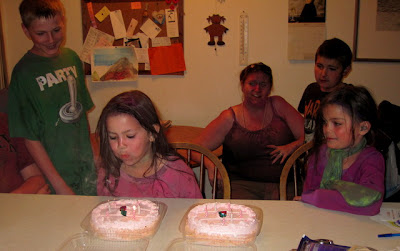 We spent a few minutes playing before they had to leave and then we had to leave, too, so that I could get these girls into bed! We had quite the crazy day today—a friend's baby blessing at 9:00 AM that we had to get the girls up and ready for and then three hours of our own ward (plus time for Andrew to practice the organ). We were at church for five hours today (and the girls handled it remarkably well).
I'll write about today tomorrow though because Andrew's plane landed at midnight last night and we didn't get home from the airport until 1:00AM. We're beat!
Posted by Nancy at 1:29 AM