Josie was in another play at school this past week called Transfiguration by Ernst Toller (alternately translated from the original German (Die Wandlung) as Transformation). It's not really a play that's suited for two- and four-year-olds so I left the girls at home with Andrew and went out with my parents on Saturday night. Josie's teacher tends to choose interesting/challenging/thought-provoking plays more often than happy/go-lucky plays. This one was no different.

First of all, they did it in the round, which I don't think I've ever seen a high school do. Second of all, the subject matter was deep.


Toller, who was once relatively famous but who fell quickly into obscurity after his death, wrote Transfiguration while he was a political prisoner (shortly after WWI ended, Toller was part of the uprising known as the Bavarian Soviet Republic; he made some leadership errors and was eventually ousted by the Russian communists (led by Eugen Leviné), who were eventually ousted by the German "White Guards of Capitalism." Leviné was executed, apparently without trial, which upset the people. So although Toller was eventually captured and imprisoned he was not executed but instead given a relatively light sentence (5 years)). So, Toller survived the revolution and became a smashing success in the theater.

When Transfiguration was shown for the hundredth time, Toller was offered a pardon, which he refused.

He led an interesting life that culminated in suicide. When I found this out I said to Andrew, "That does not surprise me one bit." Not after watching one of his plays. No sir.

Transfiguration was a little dark. But the kids did a great job putting it on.

I think my favourite part was scene 4—"The Battle-field"—where, according to our program, "the decaying skeletons of the soldiers who have died in battle dance in celebration of their new-found freedom." The freedom they are celebrating is the freedom from differences. In death there is no male or female, black or white, rich or poor, shame or pride. In death we are united.

I also liked the opening scene where Death-by-peace and Death-by-war discuss whose power is superior. Death-by-war showcases his might—death by thousands and millions, plowing people down in neat little rows, showing no mercy. This was WWI, after all, which was terribly gruesome due to the advent of machine guns and poisonous gasses and so forth. Death-by-peace mocks Death-by-war, claiming to be "chaos." Completely unpredictable, Death-by-peace takes those who least expect it while Death-by-war's tactics are always known.

I suppose most of my favourite scenes were the somewhat-creepy ones between reality and illusion. They were put on by the skeletons you see in the picture below: 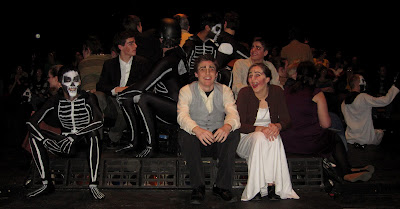 Josie was not a skeleton but her scenes were wonderful, too. She's in the white dress and brown sweater.

Her scenes mostly depicted real-life (though she was also a nurse in the sickening experimental veterans hospital, which was a dream scene). She had a speaking part in Scene 8—The Hostal—and in the closing scenes played a woman whose nights were filled with "hot desire." Thus the baby, I suppose. 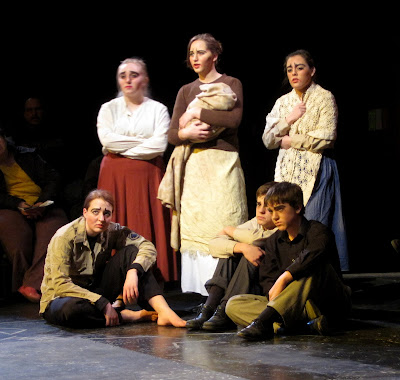 I thought it was interesting that the protagonist was Frieda—a woman who goes from a revolutionary dreamer to being at the front lines to leading the people in peaceful revolution. Toller used the play to discuss his own experiences in the war, so I found it interesting that he chose a female lead, especially since she was sent to the front. I suppose, though, that since American and Canadian armies were enlisting women to fight it makes sense that Germany would do the same. Her role in the army seemed a bit nurse-like at first but then she volunteered for a top-secret suicide mission and ends up surviving.
I realize that Germany was part of the Central Powers and that makes them "the enemy," but I don't see why German women aren't mentioned at all on the Wikipedia article I read on "Women's roles in the World Wars" during WWI. That seems a little one-sided. Surely German women had roles, too, and I fail to see how dangerous it would be to learn a bit about what they did—whether they fought at the front as soldiers or merely as nurses or whether they fought at all. Not all Germans were in love with the war, even if they were "the bad guys."
We see this in Toller through Frieda—she makes a statue at the end of the war, celebrating their victory...which is odd because the Allied nations were the victors according to our history books...but then destroys it when she loses faith in humanity.
Frieda was, like Toller, both a Jew and a German so there was a lot of talk in the play about whether Frieda belonged—at war because she was a woman—and to her country—because she was a Jew. In the end she decides that she belongs to her country, which her family feels is betraying her heritage, but Frieda feels both country and religion are important and, though we can see that her view of both humanity and reality get more and more demented as the play goes on, eventually ends up leading the people in peaceful protest (instead of fighting angrily as The Agitator would have the people do, causing yet more death and suffering).
I think Toller's view of humanity and reality ended up getting a little demented as his life went on, too. Obviously the question of the worthiness of Jews to belong anywhere, no matter how ridiculous of a question it may be, is an old one (it certainly predates WWII and the holocaust) and Toller probably felt, like Frieda, that he didn't quite belong but he so desperately wanted to. Having a country is an important part of identity. and though he may have dreamt of a utopian society what he ended up with was Nazi Germany.
Toller committed suicide in May of 1939, after his siblings had been sent to a concentration camp. This confused me when I read it because WWII didn't "begin" until September of 1939. But then, once I thought about it a little bit, it seemed so obvious that the Nazi party probably didn't spring up in 1939 and Germany was going through...growing pains...much earlier than the start of WWII. And, indeed, the Nazi party came into power with Hitler at the head in 1933, at which time Toller was exiled and his citizenship nullified. The first concentration camp in Germany—Dachau—was established in March of 1933. No doubt Toller's siblings were quickly carted off (what being both Jewish and blood relatives of a rogue "Communist" citizen) and incarcerated there.
Meanwhile, Toller first went to London and then on tour through Canada and the United States, eventually settling (and ending his life) in California.
It's so interesting that someone who seems to have been so influential in history is so obscure today. I tried to find a copy of Transfiguration so that I could look up some lines and reread some parts but it isn't exactly all that available. BYU has one copy, but it's checked out. Our local library had nothing by Toller (which isn't exactly surprising though it was a little disappointing). I did fine a thesis online (Ernst Toller: An Intellectual Youth Biography; 1893–1918 by Frederik Steven Louis Schouten) that discusses Toller's life at length and it's been interesting to skim through that since I'm not sure I will read Toller's autobiography any time in the near future (as interesting a man as he was).
So, anyway...there you go. It was a good play, but not one that you'd go to to have a good time. Instead it was more of a thinking play.
Posted by Nancy at 12:47 AM