This afternoon the girls and I were downstairs watching "Harry Potter 1." Rachel watched about a third of it before Miriam woke up and we joined her. We finished reading Harry Potter 2 yesterday so tomorrow we're going to watch the movie. So, there we were, sitting on the couch, innocently watching Harry Potter when the utility closet, which was across the room from us, started going wild.
There was a tremendous banging and a whole lot of shaking and all three of us flipped out.
Rachel and Miriam both started screaming and I probably did, too, though I can't remember. I do remember that I was in the middle of dragging both girls up the stairs when the banging stopped and was replaced by a mysterious whooshing and gurgling noise.
No longer afraid that our furnace was going to explode, I allowed Rachel to return back to the couch to finish watching Harry Potter. I was shocked that she wanted to go back into the basement at all because she is often a regular scaredy-cat and that noise had scared the dickens out of us. At her insistence we somewhat shakily returned to the basement. She curled up with Miriam on the couch and I moved the table away from the front of the closet doors to peek inside.
Welcome to the interior of our utility closet: 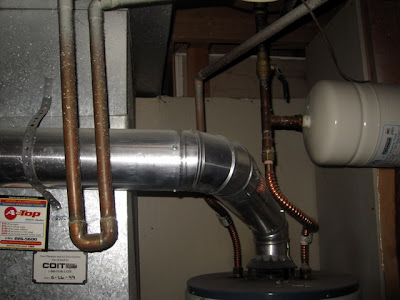 I looked around and everything seemed to be in order. Nothing was on fire. Nothing was leaking. Nothing was...missing. I quickly realized that I had no clue what I was doing and thought that I should call Andrew. But he was in a meeting so I started writing a text to him.
"Something bad happened," I wrote.
And then I deleted that because a) it would make him panic and b) I had no idea how to explain what had actually happened because I wasn't sure what had happened.
Then I thought about calling Karen but she and Reid are vacationing in Colorado right now and I didn't know when they'd be getting on the plane to come home or even how to explain what was happening because I had no idea what was happening.
So then I called my little sister Josie because she always has her phone close at hand and I knew she would answer. She didn't. My dad did. That was even better. He said he'd come over straight away and was at my front door within minutes.
I helped him locate the water main and he shut it off. Then he went to talk to some construction workers down the street that he'd passed on the way up to our house. They said that a water main had broken and they were digging around to find it and that because we live at the top of a hill our house lost water first (I had also called our neighbours to see whether or not they had water; they did) and our pipes were sucking up air. They'd let us know when it was fixed.
My dad invited us over but Rachel wanted to finish watching Harry Potter and we weren't ready to go or anything so we decided to stay (but that we'd call him if we needed anything).
The next mystery I had to solve (besides what to fix for dinner without water) was what in the world had made that terrible banging noise. It didn't take long to figure it out.
See these water pipes? 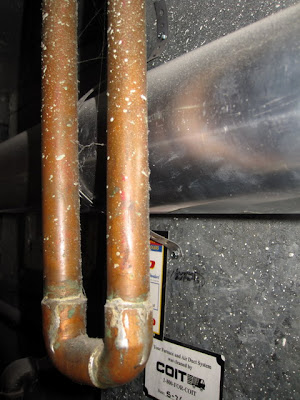 They're like a centimeter away from the air duct.
See this air duct? 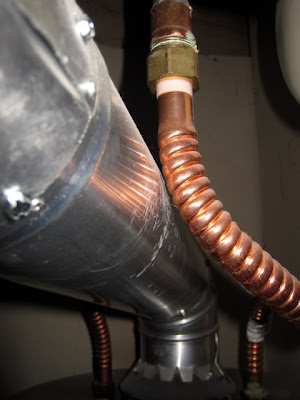 It's like a millimeter away from this water pipe.
When the water first went out and the pipes started sucking in air they started shaking and the shaking caused a whole lot of banging because they didn't have very much wiggle room before they started hitting their compadres in the utility room. The banging only lasted for a minute or so but it was a terrifying minute.
When Andrew got home Rachel tried to demonstrate the noise to him by hiding in the pantry and banging on the doors while growling. We then went downstairs to pick some things up and Andrew hid in the utility closet and wiggled the pipes to see if he could recreate the noise. He could. Only this time it wasn't as scary because I knew exactly what it was that was making that noise.
I have one question for whoever put the pipes in. What is up with that u-turn of a pipe, anyway? I mean, it could have been connected in ten different ways before you needed to be going and doing that. Just sayin'.
So, we had chili and sweet potato fries for dinner (instead of spaghetti which had been my plan earlier in the day) and I went about the house feeling inordinately proud of myself for having had cleaned the toilet, washed the dishes, done the laundry, and showered this morning instead of leaving any of those tasks until the afternoon.
It took me a good ten minutes to find the hand sanitizer and I thought fondly of our days in Egypt when hand sanitizer had a permanent place on our bathroom sink. Then Rachel tried to pour herself a cup of water and ended up spilling half the pitcher of water all over the kitchen table and I thought fondly of how we never drank tap water in Egypt and so always had a ready supply of drinking water (we have that here, too, it's just down in the storage room). Then Rachel had to go to the bathroom so I told her she could but that she couldn't flush the toilet and she got all upset and threatened to move out because our house would start stinking so bad.
I sat her down and told her all about the glory days of Egypt—when we'd store tap water in used water bottles just so that we could flush the toilet when we didn't have water, which was often. But before we figured out that little trick we just wouldn't flush.
Anyway, we survived. And just before we sat down to eat dinner there was a knock at the door and one of the workers told us the water should be back on soon and asked us to turn on our tub (and only our tub). It took a while for the water to turn on and when it did I thought some naughty children were running pencils or cars or something up and down Grandma's coffee table in the living room. Turns out that grating noise was just the air coming through the pipes. Air...and mud. 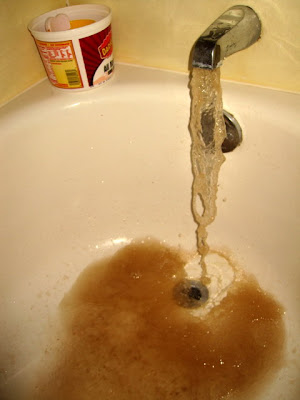 It took about a half an hour for the water to run clear. And I still need to clean the mud out of the tub.
But at least we have water again!
I posted about this little adventure on facebook and accidentally scared a few people.
"Water main broke," I wrote and then explained the situation in more detail.
My friend Matt wrote, "I read that wrong at first—I missed the word 'main' and though, oh, no! Then...whew, oh, good. Then...well, not good, but...not near as bad at least."
I didn't really understand what he was getting at because we weren't thinking about the same thing at all and so even when I took the word 'main' out it was confusing for me. How can water break? That doesn't even make sense.
Then my friend Hailey said, "All I saw was 'water broke,'" and suddenly it dawned on me.
Water breaks when you're in labour.
I assured everyone the baby was fine—nice and cozy in its water (which did not break).
Posted by Nancy at 9:35 PM