Springtime in Utah is predictably unpredictable. Thus it was that on March 1st we spent the afternoon outside in the snow—at least, that's where the girls spent their afternoon. I told Rachel she could struggle through building a snowman by herself because I just didn't feel like going out in the snow (I'm kind of over winter). It was a good learning experience for her.

She experienced some failures—this snowman was actually about as tall as she was but its center of gravity was way off: 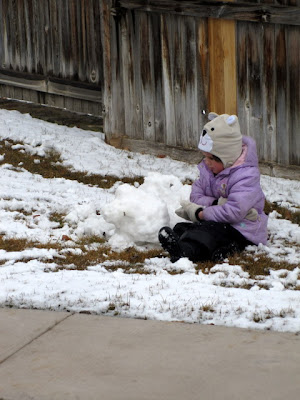 And some little successes—considering this is her first solo-mission I'd label it a smashing success: 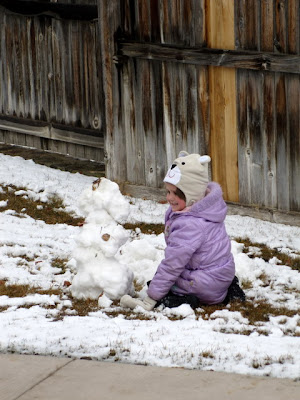 She had a huge tantrum in the snow after her little snowman fell over—she was lying on the ground, kicking and screaming. And I was like, "Whatever—there's a sliding door between me and you; scream as much as you want." So she did.
Miriam spent most of her time making "snow cakes" with the sand toys and visiting me through the sliding door. I think I had to open the door fifty times to put her mittens back on (and that was just while I was making lunch). 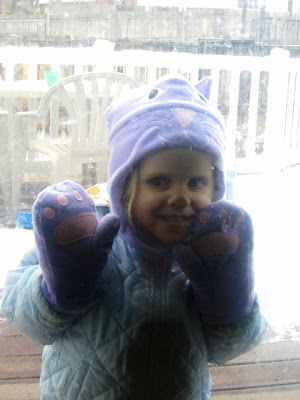 She sure is a cutie though! 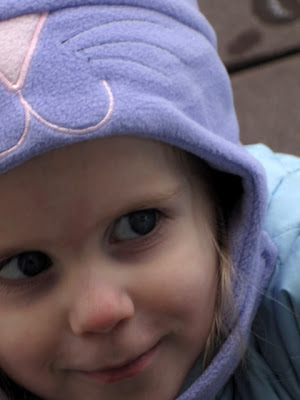 By today, though, the temperature got up into the 60s. The girls opened the sliding door this morning and ran in and out all during breakfast. After we'd gotten some chores done and finally convinced Rachel to get out of her pyjamas we went to the park. My friend Cristina met us there—it was fun to visit with her and to have an extra person for the kids to play with. My back has started aching—it usually does when I'm pregnant no matter what exercises I do to prevent/help—and so running and spinning and tossing and twirling with children isn't exactly classified as fun anymore. Cristina was giving out piggy-back rides, though, and the girls thought that was great!
Rachel dubbed herself a spider today and was climbing all over everything. Last year we couldn't get her to try half the climbing equipment and today she was scaling it all—or at least attempting to scale it. 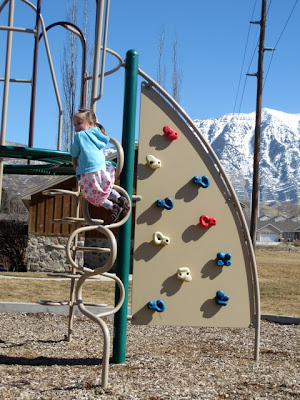 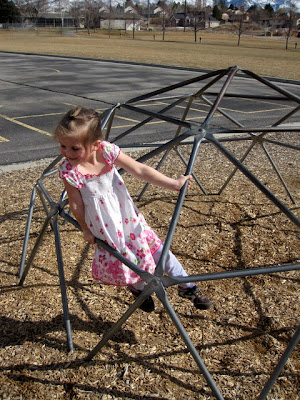 Miriam loves to swing before sliding now—even if she doesn't look it. 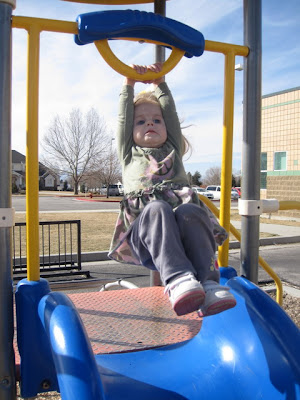 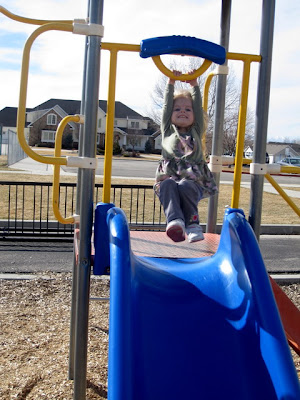 Rachel was pretty proud of herself for figuring out how to climb on top of this tunnel-thing: 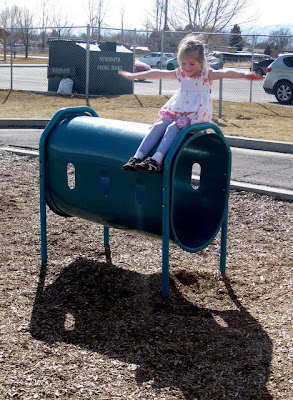 She was even brave enough to just slide off and land by herself. She likes to pretend it's a horse (but today it was one of her webs). 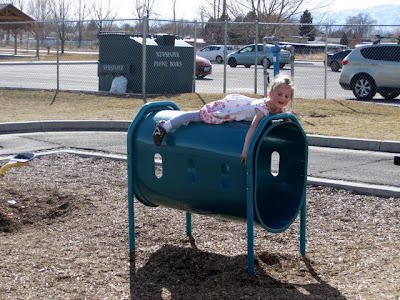 Miriam was proud of herself for climbing the jungle-gym. Rachel said that Miriam was a fly and was stuck in her web—she tried to suck her blood. Miriam bit her. She's been biting everything lately. 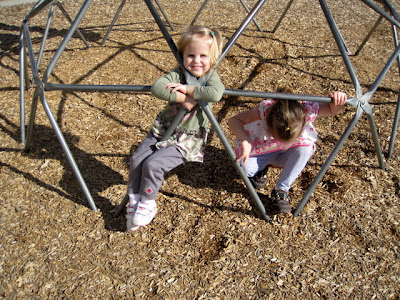 She bit me the other day when I picked her up to put her down for a nap.
"That was not your smartest move," I snapped at her.
She looked up at me with her innocent little eyes and said, "Oh." 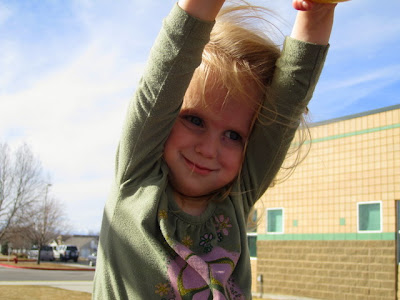 We discovered tonight that she's getting her two-year molars so that explains why she's been complaining about her mouth hurting and it might even explain why she had diarrhea come back after the diarrhea that was associated with her fever. It doesn't explain the fever though—that was an infection of sorts for sure because teething doesn't cause crazy fevers like that.
Anyway, she started biting everything in sight while we were doing bedtime. I told her to just simmer down and we'd find her a teething toy.
"I can chew on a toy?" she asked.
Miriam hasn't gotten any new teeth for a ages—I was beginning to wonder if those two-year molars were ever going to come in. She continued to patter around the bedroom, chewing on random things. She made a bit of a mistake when she started biting Rachel's blanket. Rachel, naturally, flipped out.
"Miriam! What are you doing? Stop that!" I said.
"Just that—I'm trying it out," Miriam explained.
We found her a teething toy but it didn't really matter because she was out within ten minutes of putting her down. 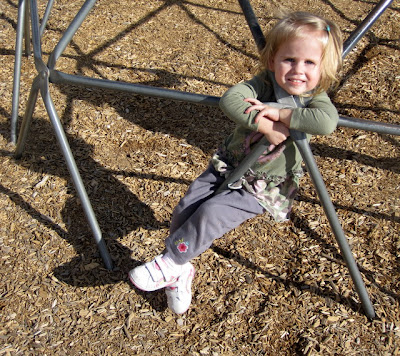 I guess playing at the park for hours (and then not taking a nap) did her in today. Both girls actually were asleep before 9:00! I can't even remember the last time that happened.
I love when it's warm enough to play outside and actually enjoy it (plus for North Carolina, minus for Indiana)!
Posted by Nancy at 11:16 PM