"I don't usually tell people I'm 100% sure," the doctor said. "But this baby is leaving nothing to guesswork." 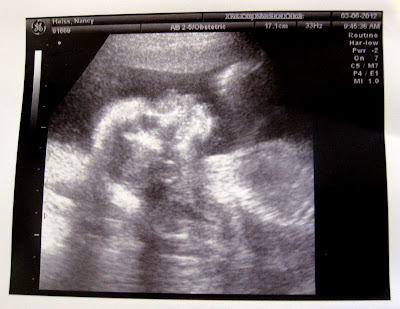 One hand was up by the baby's face and the other hand was pulling on its toes, and its legs were wide open. We've got ourselves a thumb-sucking, toe-grabbing, leg-sprawling boy! 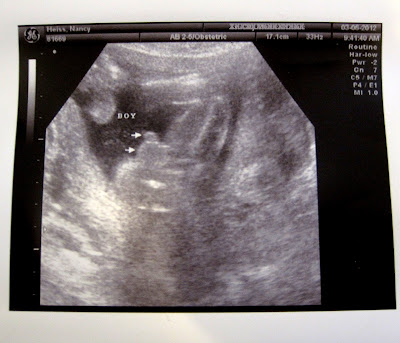 Andrew said he was pretty sure it was a boy—because of the Chinese gender prediction calendar he used. I had no clue but was unsure if Andrew knew the boy recipe so I was kind of expecting a girl simply because that's all we've got. But truthfully, we didn't have a hunch either way and would have been excited either way. We're certainly excited for a little boy, though we're a little nervous, too.

I told a few people before picking Rachel up from school but mostly we were waiting to tell her before telling people. Grandma and I tried to prepare Miriam to accept the idea of a baby brother.

"Just that I want a baby sister in my family!" she'd say whenever we said anything about how nice it would be to have a baby brother. 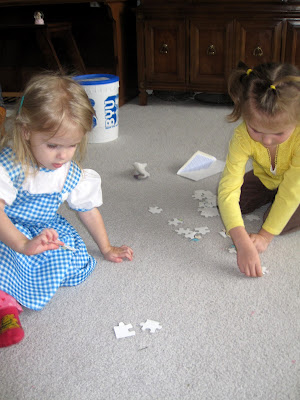 By the time we'd picked Rachel up from school and the girls put the puzzle together, Miriam was fine with the idea of a brother. Rachel figured out it was a boy the minute she opened the puzzle because it was blue and green. She was ecstatic! 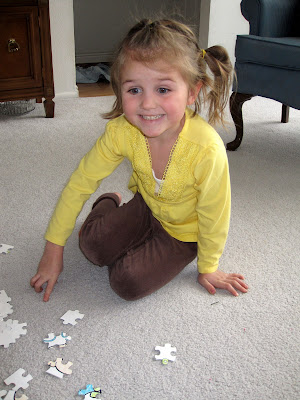 When we had it all together, Grandma said, "It says: It's a boy!"

"It's going to be a boy baby—it's a little brother! Isn't that exciting?" we said.

"Okay," she sighed, and popped her thumb in her mouth because that's how she deals with disappointment. 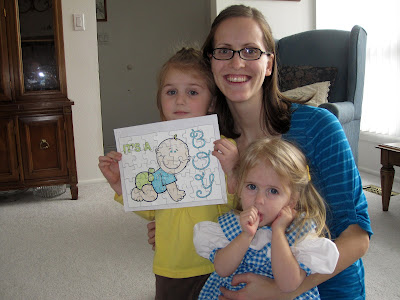 We're excited to even out our family demographics a little bit. As you can see we're currently a little girl-heavy. But that will change in just a few months!

I don't know why Rachel didn't really smile in this picture—she really was quite excited—so I took another one just of her. She's really happy about this brother and was suggesting all types of names, mostly from Harry Potter. When I told her that I wasn't going to name the baby after any Harry Potter characters she suggested Markus. Miriam heard Necklace and thought the name was brilliant. 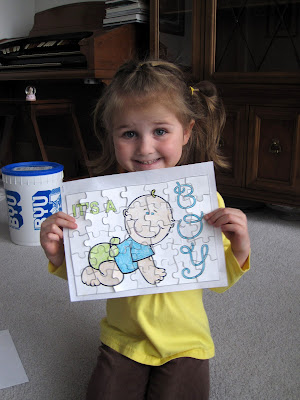 We're going to have to come up with a name. I've been looking and looking and so far all I have is a list a mile long of names I don't like. But now that we know it's a boy Andrew will at least join the conversation. He has no excuse not to at this point!

Everything else about the ultrasound checked out—the baby measured a day early but we're keeping the due date as it stands (July 18). The heart and brain and spine and stomach and bladder and legs and arms and fingers and toes and face all looked beautiful. The only thing the doctor couldn't really see were the kidneys—we got a glimpse but weren't able to measure them because this little baby moves a lot! The doctor had trouble putting labels on anything because he couldn't get a good picture because of our wiggly little guy. But the doctor wasn't too worried about not getting a good look at the kidneys because the bladder was working just fine, which means that the kidneys had to be, too.

Whatever do you do with one of those?