9:45 PM There. Kids are in bed. Perhaps they'll sleep in tomorrow.

This morning we got up and rushed Rachel off to school. Miriam and I went visiting teaching and Tracy offered to have Rachel over for the afternoon since it's been a while since our kids have played together. Score! I realize that service should probably go the other way around. But, as Tracy pointed out, this helps both of us. I don't have to entertain Rachel. Rachel entertains her three-year-old. Win, win, win.

Miriam and I took an early nap so that we could pick Rachel and Asher up to go to the park. It was a beautiful day today and tomorrow is supposed to be even warmer. It's like spring is here already (but I'm really not going to get my hopes up quite yet).

So, we picked up Rachel and Asher and then stopped to pick up Tyler on the way, too. His mom was outside doing yard work and since Tyler is in my Sunbeams class and hates coming to class I thought that if I could get him to come to the park with me it would be a good start. Walking four kids to the park was a little insane—more than one person thought I was insane, I'm sure. One mom at the park asked if I was supermom. Haha...no.

No one asked if all the kids were mine...they probably didn't dare to since technically I suppose they all could have been. One four-year-old, two three-year-olds, one two-year-old, and a pregnant belly. Yeah...no thanks. I'll keep my two and the pregnant belly.

Auntie Katharine and Kayl showed up at the park to play, too, which was a nice surprise! 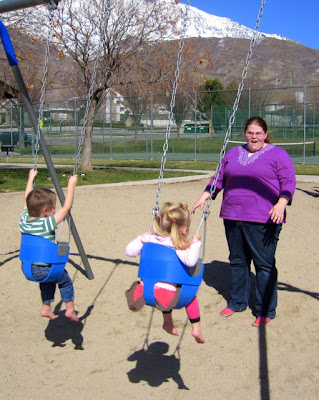 Kayl and Miriam spent quite a bit of time swinging beside each other while Rachel ran off with Asher and Tyler. 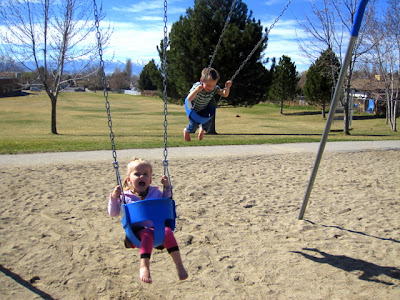 At one point we had all five of the kiddos on the swings. It was an acrobatic effort to keep them all in motion. Rachel has almost figured out the art of pumping, but she's not quite self-sufficient yet. 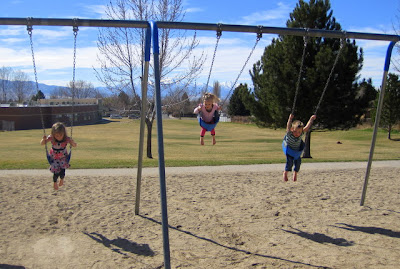 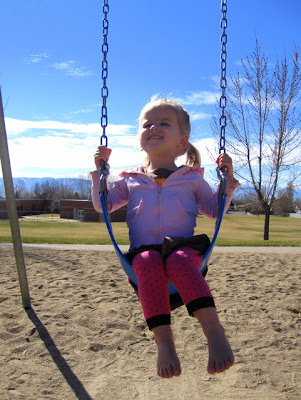 After she bragged about it for several minutes she sang, "In...and out...and in...and out..." which is what we sing for Rachel. Miriam did not try to pump her legs, though. She was much too busy keeping her balance and she did a great job—she was on the big girl swing for a long time.
We also did quite a bit of playing in the sand. The kids built some sand mounds castles... 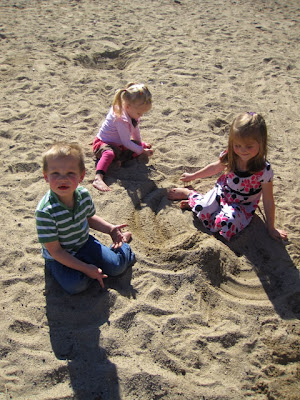 ...and Rachel started making sand-angels. It was quite the hit at the park. Even the kids we didn't know were joining in. This is why other parents love me. Not. 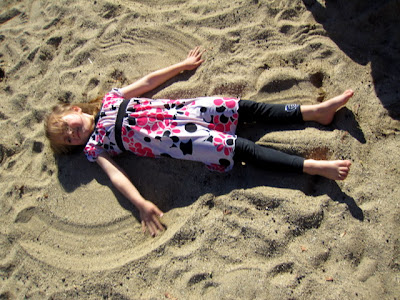 And to think we were just making snow angels on Monday. Hmmm...must be spring in Utah!
Rachel saw some older girls climbing on the outside of the slide and decided she'd give it a go. She made it up there and then completely flipped out—but found her way back down to safety so it all worked out. 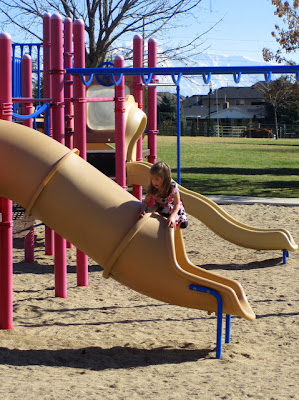 Miriam and Rachel both love one of the driveways we pass on the way home. It's not paved. It's just gravel. The girls think it's some kind of one-stop rock shop. I always tell them that, as crazy as it sounds, those people want to keep their rocks and they likely paid good money to have the rocks put there so we aren't taking any of the rocks home. Miriam was trying to win me over with her smile today. She kept picking up rocks, holding them up, cocking her head, and coyly smiling would ask, "This one?"
I'd tell her no.
She'd pick up another one and do the same thing.
I'd tell her no.
She'd pick up another one... 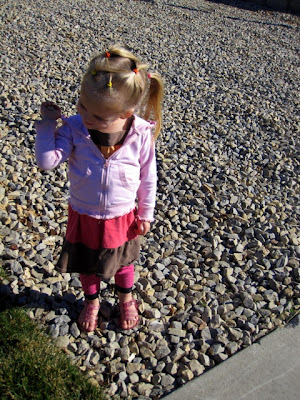 The girls wanted popsicles when we got home because it was "so" hot (more likely because when we dropped Tyler off at home his sister was sitting outside eating a popsicle) so I sent them into the backyard with popsicles while I made dinner.

We had breakfast burritos (...of sorts. Really it was just scrambled eggs and cheese in a tortilla with a couple slices of tomato. That counts as a breakfast burrito, right?) and Grandma had picked up some strawberries while she was out so we had a big bowlful of those, too.

Then I threw the girls in the tub. I was planning on bathing them yesterday but then Andrew came home earlier than I thought he would and we spent bath time playing instead, which was so worth it. Besides, they just got dirtier today, anyway. The benefit of their sand angel venture was that their scalps got nicely exfoliated while we scrubbed all the sand out of their hair. They're squeaky clean now.

Auntie Josie phoned while we were brushing their hair and asked if they were up for a movie night. Of course they were!

Josie's been wanting to watch "Lilo and Stitch" with them for a long time. It's one of Josie's favourite movies and my girls had never seen it. Rachel loved it—especially all the surfing scenes. She's been interested in dolphins lately and a few scenes featured dolphins.

Naanii came over too and at the end of the movie she had a little dance party with the girls before going home.

Then the girls wanted a snack. I said that we'd have to have a quick snack because it was already past bedtime and we still needed to have scriptures and prayer. Rachel, taking charge, said, "Articles of Faith, go!"

That's usually the line Andrew or I say when either of us deems the night too wild/late/rushed/whatever and pulling out the scriptures and figuring out where we are and then trying to get the kids to sit still and listen and take their turns seems too hard. Tonight it was Rachel who pulled the Articles of Faith card, so we said some Articles of Faith while we ate our snack.

The girls are really good with the first few. The last few are still rough. Really rough. We'll have to work on them. That's why we have wild/late/rushed nights—so that we can practice our Articles of Faith. Right?

They were both so tired that I only had to put them to bed once. No one came out to use the potty (again) or get a hug (again) or change their pyjamas (again) or to fill up their water cup (again) or because there were scary shadows. In fact, neither one of them managed to come up with a single excuse to get out of bed.

It was kind of nice. And also a little bit lonely...almost eerie. What is my purpose in life if not to put my children to bed a thousand times a night?

What am I still doing up while my kids are sleeping so nicely? I must just be better at making up excuses to stay up than they are.
Posted by Nancy at 12:42 AM