We have listened to the Frozen soundtrack so many time on Spotify that we finally decided to buy it—support the industry and no more commercials (win, win). It's fairly safe to say that two-thirds of our children know most of the words to every song (there are still some lines they sing funny—for example, Rachel asked me yesterday why Elsa says, "Up here in the golden air I finally can breathe." The lyrics are "cold, thin air").

Even Benjamin will sing along with 'Let it Go' and 'Love is an Open Door,' though he only sings one word for each of those songs (go and door, respectively). His favourite song is 'Frozen Heart.' He has choreographed a dance for it. And it's adorable. And I took a video of it but if I post it YouTube will get mad at me for copyright infringement or something so you'll just have to imagine his adorableness (and that of the girls dancing and singing to the soundtrack).

Last year we arrived to the party wearing regular clothes and found the house full of pretty, pretty princesses. Miriam was mortified—even after Lauren's mom said it wasn't a problem and found an extra princess dress for Miriam to borrow. This year, Miriam was determined to be the belle of the ball. She hired Rachel as her designer and the two spent quite some time yesterday coming up with the perfect Elsa costume: 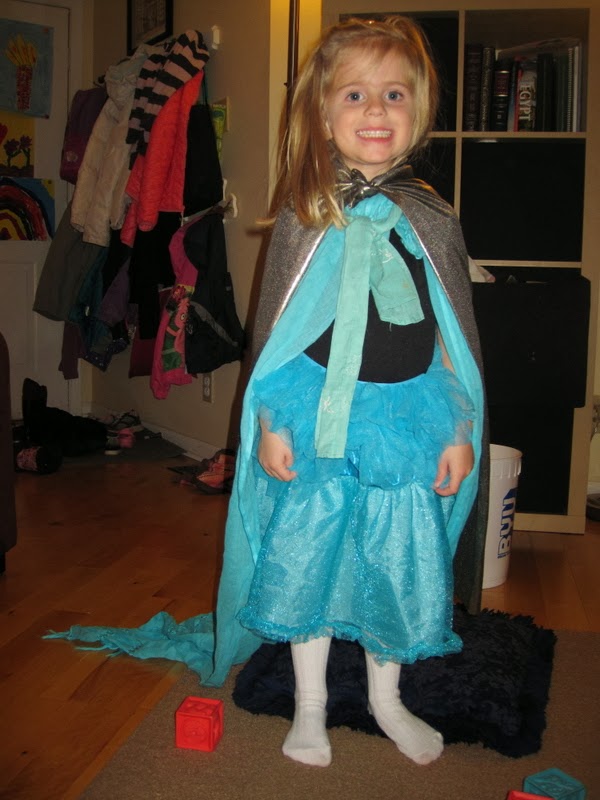 They spent the evening twirling around the living room, singing along to 'Let It Go' (on repeat...until I told them I was about to lose my sanity and demanded that they let the rest of the soundtrack play), and fashioning snowflakes out of blue lego.

This morning Rachel was on a three-hour delayed schedule (if you're keeping track that's two half days and two full days of school that we've missed due to the inch and a half of snow we got) so she helped Miriam get ready for her party before we went out to meet the bus. Rachel even stood by while I braided Miriam's hair back "like Elsa's," giving me tips as I went along. 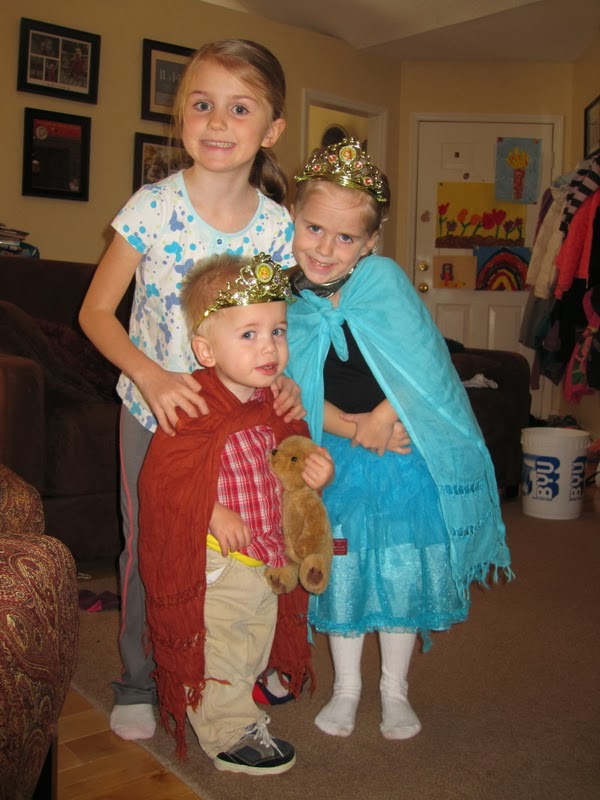 Oh, she also dressed up Benjamin who is now very much a fan of capes. I think he has a Prince Wednesday look to him. (He believes in staying still long enough for the camera to focus on him and then taking one step closer just as I take the picture—but that smile! Look at that smile!). 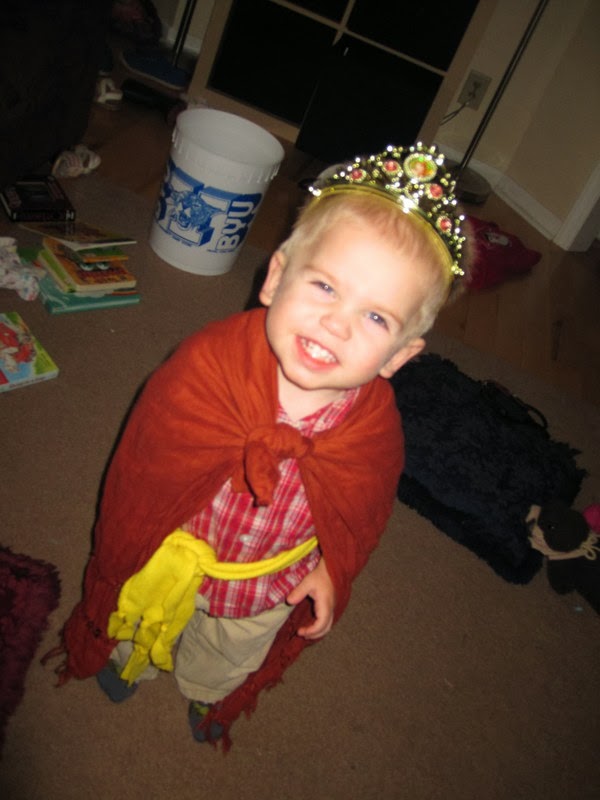 I was planning on driving to the party myself but the scooter wouldn't start this morning (a combination of cold weather and a cheap engine, I'm sure) so Andrew ended up leaving the car seats, taking the van, and wishing me luck (he had a presentation to do this morning). Finding a ride wasn't too difficult, though, because this was a birthday party/playgroup extravaganza. I sent out an email to a few moms that I knew were also going and more than one offered to pick us up.

We walked into the party and found...everyone wearing plain clothes. Miriam was clearly overdressed but she didn't seem to mind in the least. Neither did Benjamin. They wore their royal garb for the entire party...for the entire day, really.

I took Benjamin's cape off when I buckled him into his carseat for the ride home and the minute he was out of the carseat he ran to find his cape and demanded that I put it back on him.

The day seemed to go by really fast with a three-hour delay in the morning. What should have been happening at 8:00 was happening at 11:00 (because that's what a three-hour delay does, obviously), so when 4:00 rolled around it kind of took me by surprise. Benjamin was still napping (because he does that fairly regularly now, alhamdulillah) so Miriam (wearing her Elsa costume) joined me in waiting for the bus outside.

Rachel's regular bus must be in the shop because she was picked up by the wrong bus number this morning (though with the right bus driver) so I was looking for a couple of numbers to drive by (so many buses go through our neighbourhood—much to Benjamin's joy (when he's out waiting for Rachel's bus with us)).

It got later and later but there was no sign of Rachel's bus. Finally, the same wrong-numbered bus from this morning turned down our street.

"Here comes Rachel's bus," I said to Miriam. I waved to it. The driver, who wasn't the driver I was expecting, waved at me and...kept on driving by.

Now I was a little worried. Did Rachel not get on the bus? Did she get on the wrong bus? Had that not even been her bus? Was her bus still stuck in traffic somewhere (Andrew texted me to calm down—traffic was bad)?

We had a snowball fight with the twins next-door while we waited some more (using the few remaining chunks of our snowman as ammunition since virtually everything else is completely melted).

Soon the same wrong-numbered bus from this morning—the same bus-that-passed-us-by from this afternoon—pulled up again and Rachel bounded out. The (substitute) driver hit herself in the face with her list and exclaimed, "I feel so stupid! I drove right by you as you were flagging me down! I am so sorry about that!"

She had to make a second loop through our neighbourhood in order to drop Rachel off, which I'm sure put her even more behind schedule. But at least Rachel made it home safe and sound!
Posted by Nancy at 10:15 PM