This afternoon we took advantage of the 60°F weather. We have another cold front moving in—promising several inches of snow according to the forecast, so already school is getting out early, people are scrambling for bread and milk and other comfort foods, as well as winter gear like sleds and gloves and things.

We're not going to buy a sled. Our kids can take apart that cardboard box they've been playing with for the past several days if they're desperate for a slide. Garbage bags work as well. We'll get creative. I think the only thing my kids want is to build a snowman.

We have a few pairs of hand-me-down snow pants that we've been holding onto for these "just in case" moments. As my friend Becky told me when she gave me her son's too-small snow pants, "I wouldn't recommend buying winter gear, necessarily, but it's nice to have sometimes—if you can get it for free."

I remain doubtful of the forecast, but I still don't like cold fronts. Avoiding the cold is the whole reason we moved here! You know, besides grad school and all that. Anyway, that's why we went outside—to soak up some sunshine before it's too cold to be pleasant.

Rachel wouldn't play with us after school. She came home with a headache. She stayed inside to read. She totally missed out. 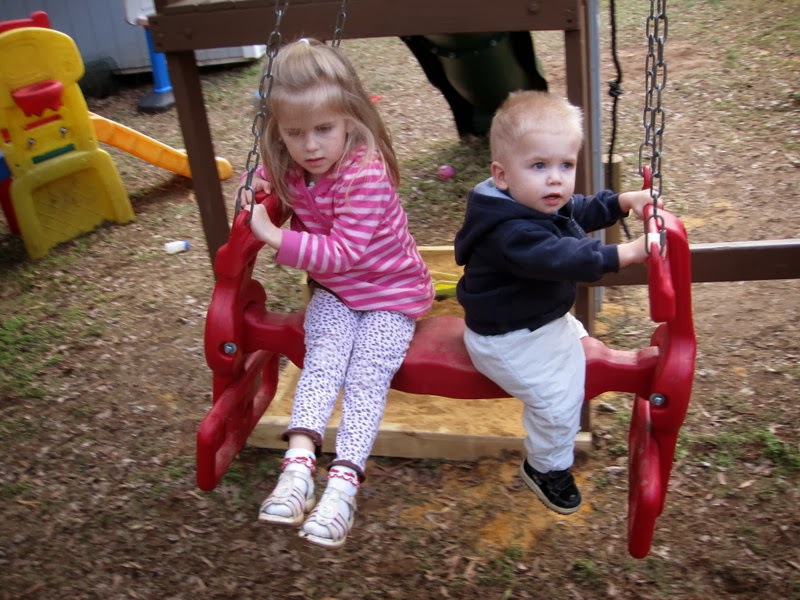 Miriam, as you can see, likes to lean backwards in the swing and look up at the sky. It makes her feel like she is flying. 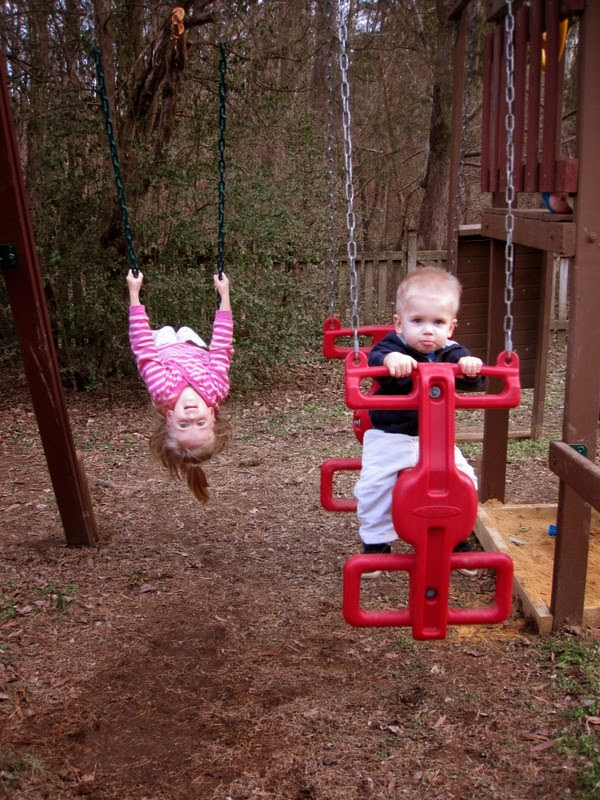 It doesn't bother me at all when she does this. 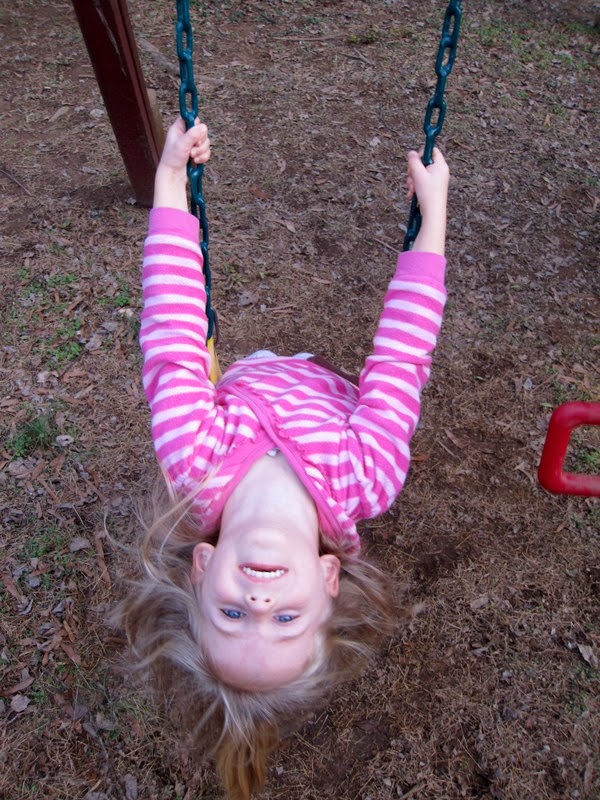 It does, however, bother me when Benjamin tries to copy her! His head is so big he can hardly walk straight so hanging backwards in the swing like this is a recipe for disaster. 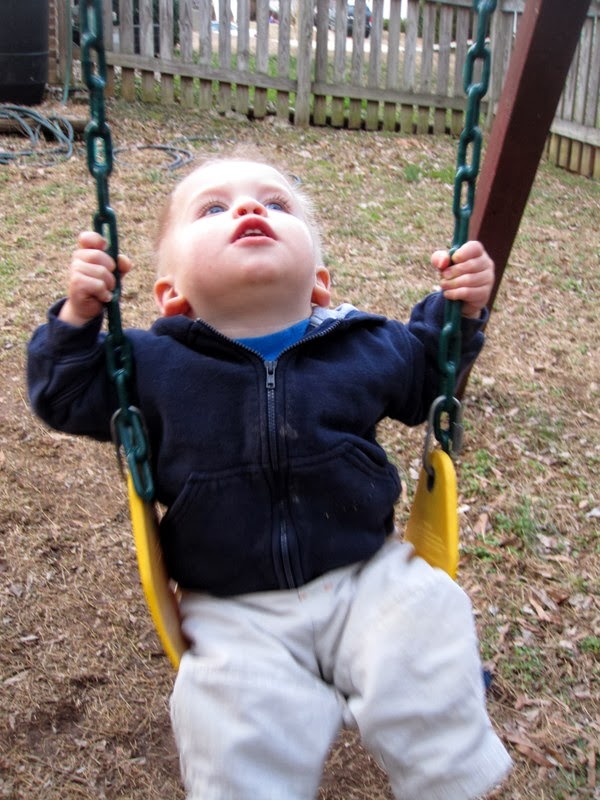 He loves to play on the platform/fort thing but the sides are open so I don't like putting him up there (did I mention his head throws him off balance?) but sometimes I indulge him because he loves the steering wheel and telescope (especially running back and forth between them, making me incredibly nervous about those open sides). Today was not a day of indulgence but it won't be long before he can make his own way up top: 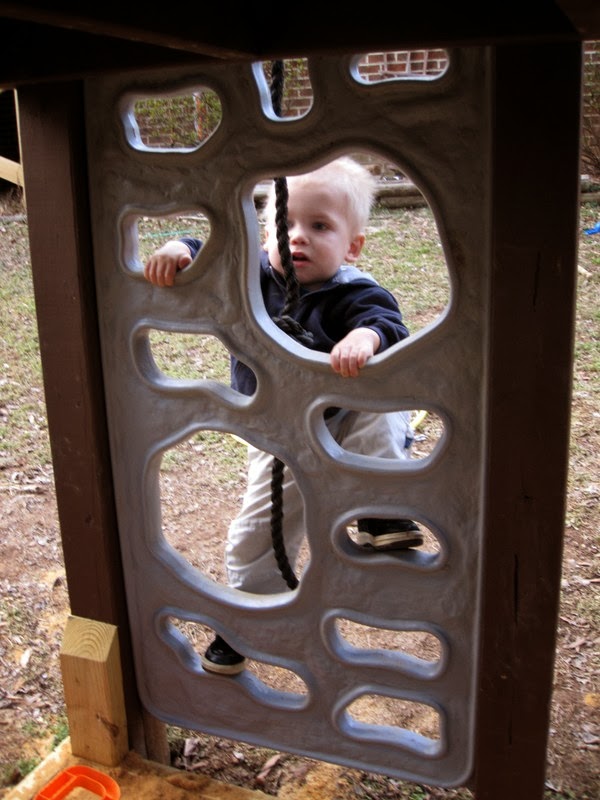 The day he succeeds in climbing that "ladder" is the day he's allowed up there, I guess. Nothing else is going to stop him.

Miriam decided to try the monkey bars again. For some reason they're freakishly high off the ground. Like, my feet even dangle when I hold on. I don't know why they're so high. I totally don't blame her for feeling antsy up there. 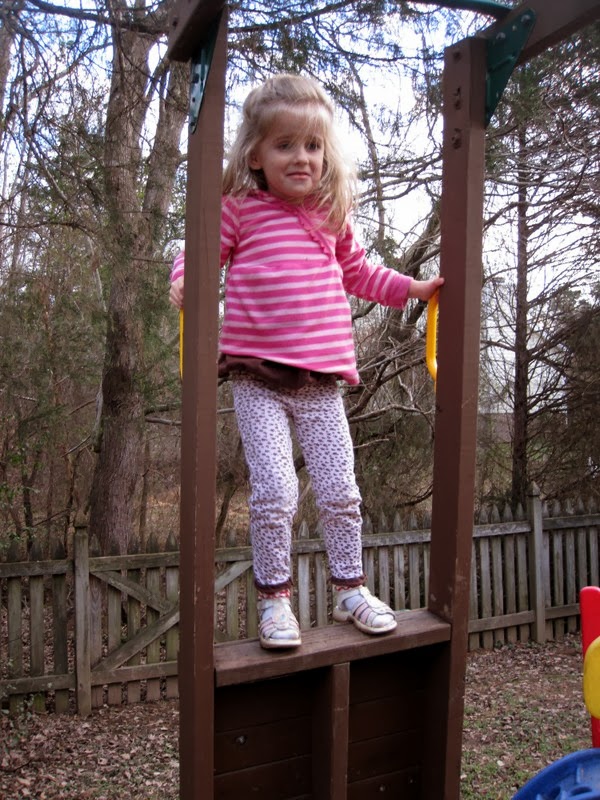 The only way up to the monkey bars is a little "rock-climbing" wall, which is no problem for Miriam. It's a little bit more of a challenge for Benjamin. 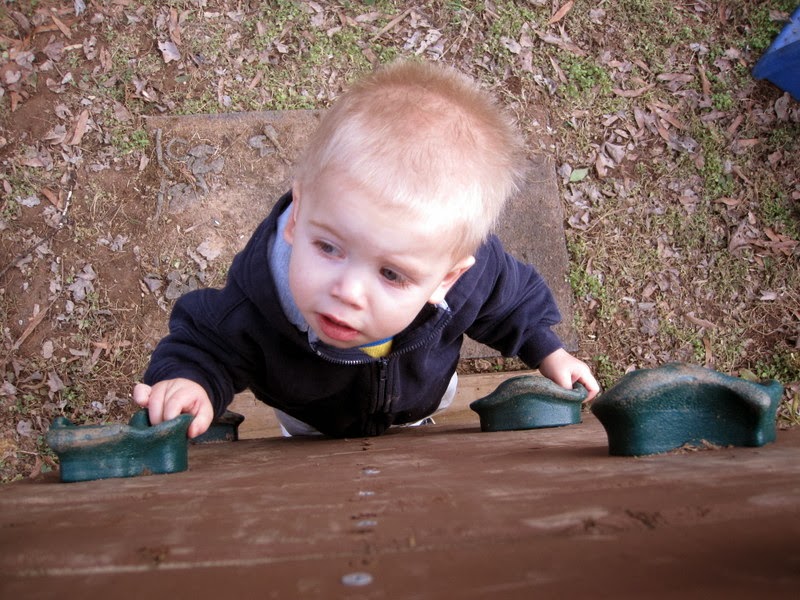 The one thing I wish this swing set had is a baby seat (I've been hunting around on Craigslist for one). The red swing is alright for Benjamin but he also insists on using the "big-kid" swing. And then his sisters insist on pushing him. And I'm not sure how much longer my heart can take it. So far he hasn't fallen off, but I'm sure it's just a matter of time. 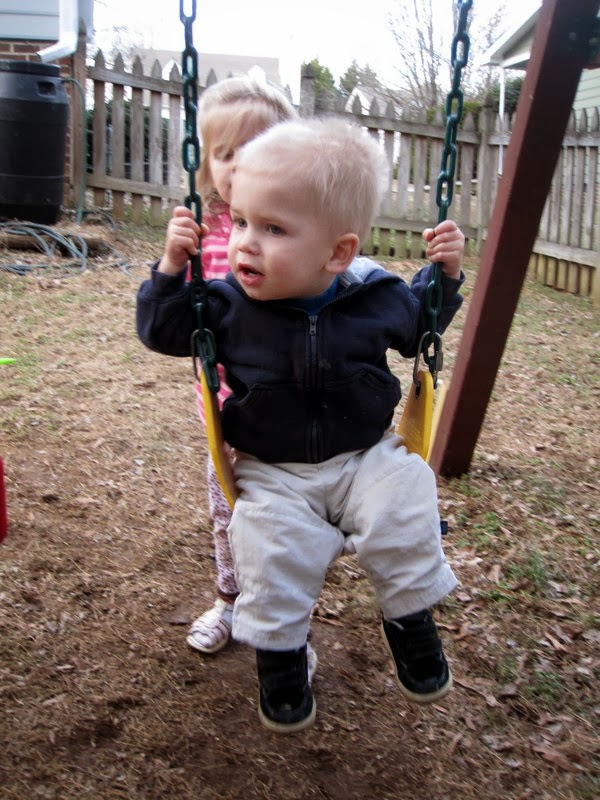 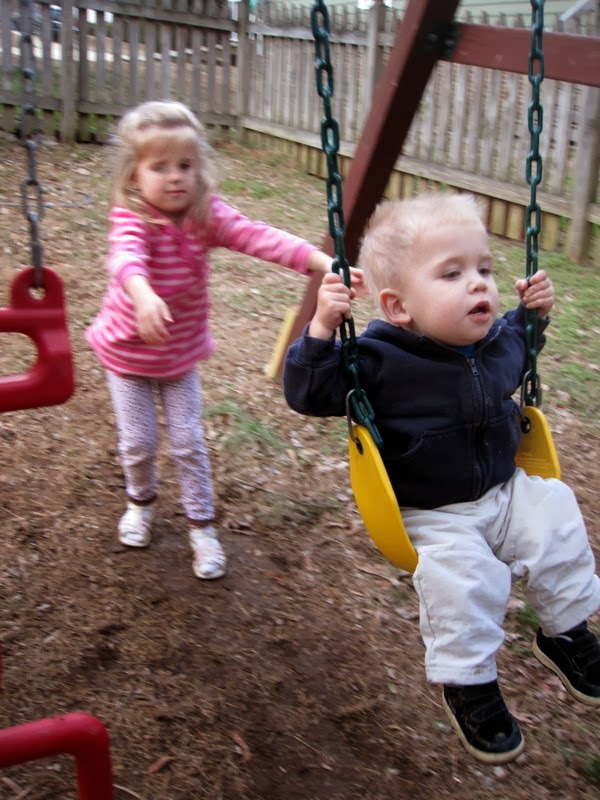 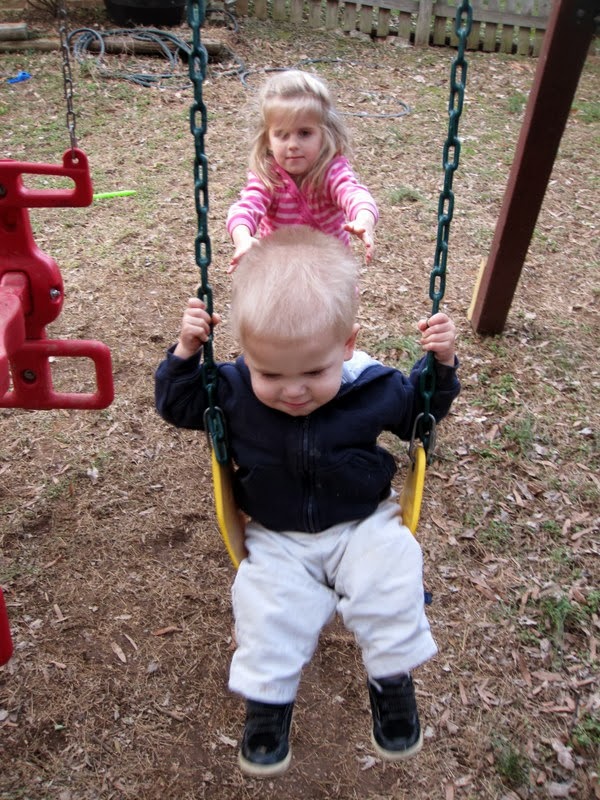 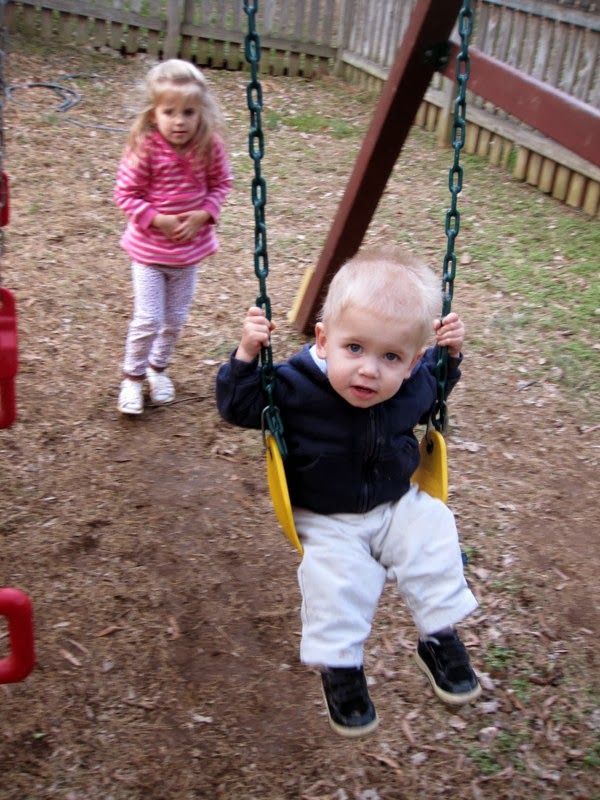 I try not to hover too much, but I'm not sure the neighbours will ever believe that because when he's on the swing I seem to be barking out a steady stream of instructions: "That's high enough! Just stop pushing for a while! Don't lean backwards, Benjamin! I said stop pushing! Give it a rest for a minute! Benjamin—hold on tight! Holy cow, Miriam—stop pushing him already!"

He doesn't mind going high and I'm really not opposed to heights, but a bucket swing would make me feel ten times more comfortable. 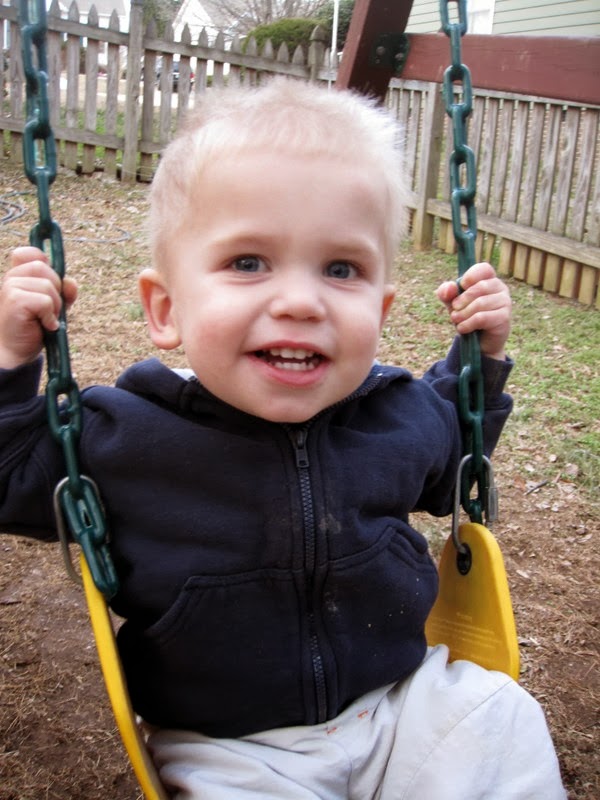 Once the kids were safely occupied in the sandbox I sat on the porch with my nose in a book. 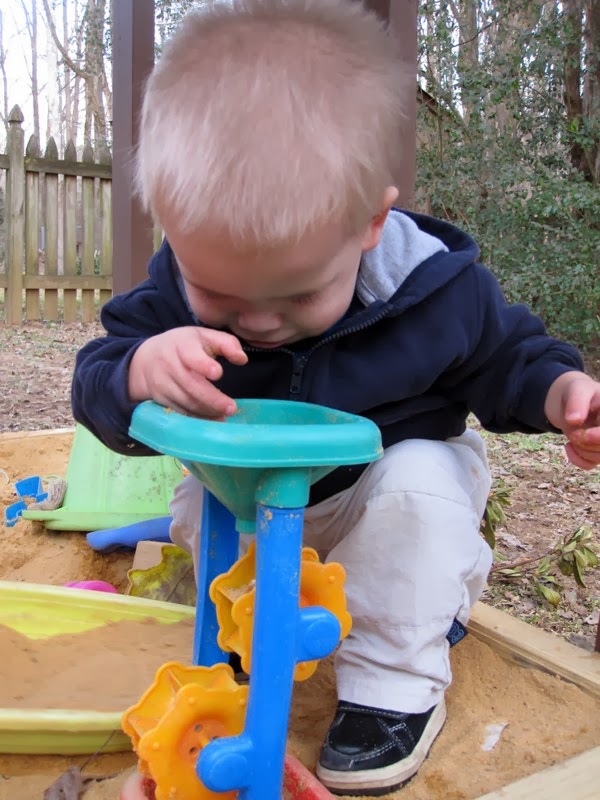 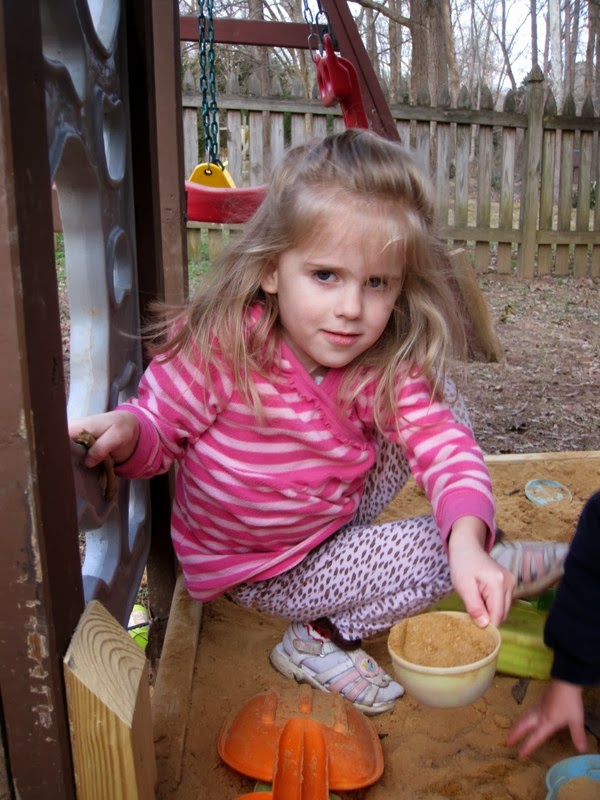 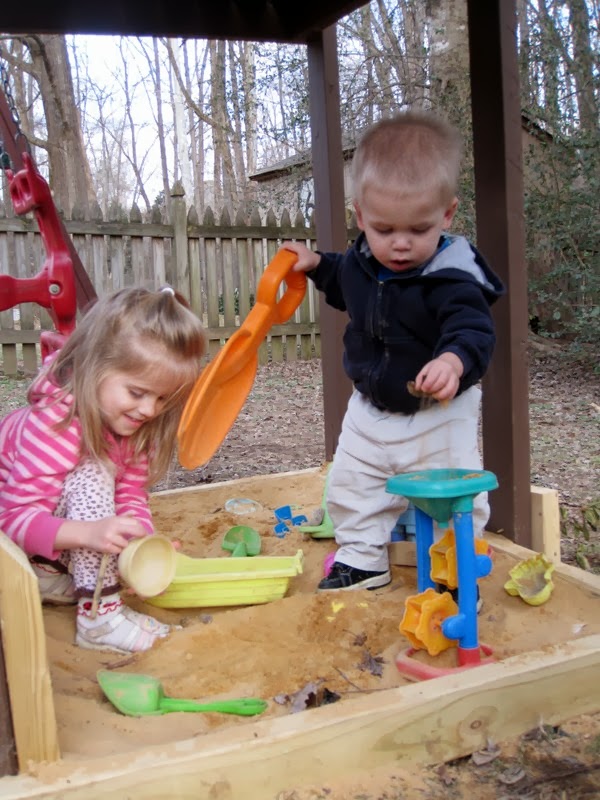 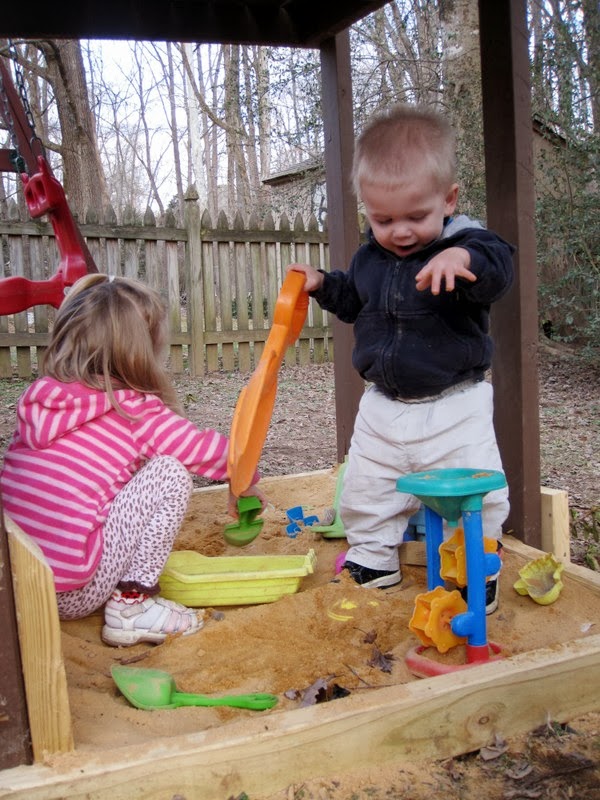 I heard Andrew drive up and gushed, "Daddy's home!" but Miriam just turned to me and said haughtily, "I don't really want to see him. I'm a little busy right now." Benjamin, upon learning that his playmate wasn't about to abandon him, decided he was perfectly happy continuing in the sandbox as well. So I went to greet Andrew on my own.