Play-doh has once again become a fascination in our house. We play with it at least once a day, which means that bits of play-doh constantly need to be cleaned up. You've seen those cleaning systems, I'm sure, that claim you can "clean your house in fifteen minutes a day!" just by assigning one chore to every day of the week. Like, you'd do laundry on Monday, floors on Tuesday, bathrooms on Wednesday, and so forth. I've tried to implement a system like that multiple times but I'm thinking it's something that just won't work with kids at home.

I sweep the floor three (or more) times a day and it's always covered in bits of...stuff. Food and dirt and paper and leaves, that kind of thing. It's never just a little bit, either. It's always massive—almost inexplicable—amounts of gunk. And now we've added play-doh to the mix. Let's just say the floor has to be swept several times a day (we'll not speak of the laundry).

When Rachel was home for the break she was really into play-doh, too, and we're just continuing it, I suppose. I have so many pictures of play-doh that Rachel took. This creation was particularly difficult for her to capture: 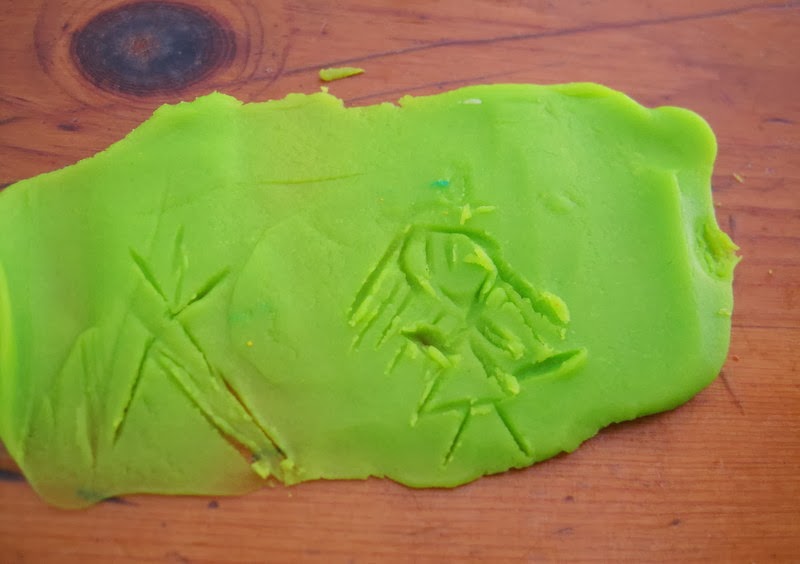 "I can't take a good picture of this!" she complained to me.

"You need more light," I advised.

"Yes. No matter what I do the picture just isn't clear."

I'm no photographer, really, but I do know a little bit more about taking pictures than Rachel does so I shared my knowledge with her. We opened the blinds to let some light in and turned the camera on macro and she was amazed that she was able to get good "clearance" on her picture. (I'm pretty sure she was going for clarity or something).

Here are a couple other pictures Rachel took last week: 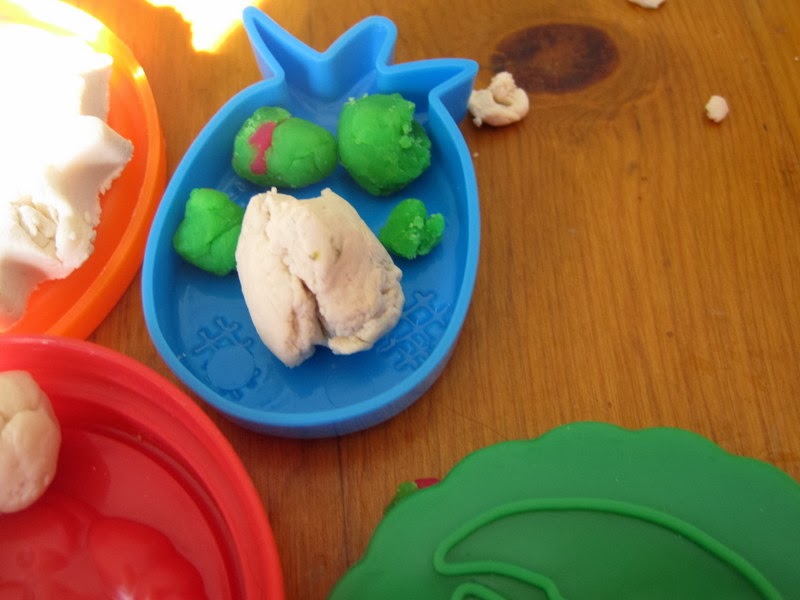 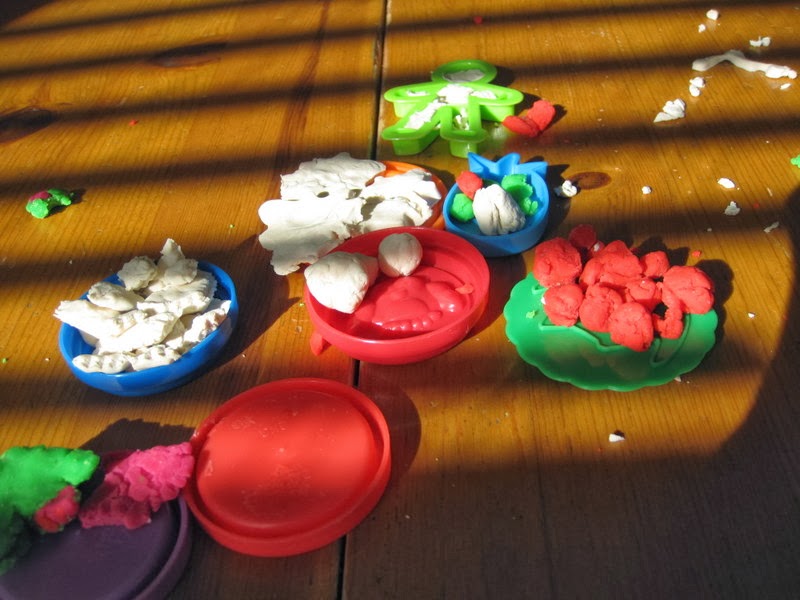 My children are impeccably gifted at making many little balls of play-doh. These balls are inclined to roll off the table and onto the floor which means that if the children don't pick them up I just sweep them up with everything else on the floor and throw them away.

The kids were all playing with play-doh one day, dividing every colour into countless little balls (they made a feast of grapes, peas, pomegranates, blueberries and any other small, round food you could possibly think of). Benjamin was sitting on the bench to play, rather than being strapped to his chair as he normally is, and I noticed that he began to smell a little...ripe.

I sighed because I don't understand why he won't tell me when he has to go potty. He's perfectly happy to do his business on the potty he just seems equally happy to do it in his pants (though, the other day we had some potty-training friends over and when they asked their moms to go potty, Benjamin asked me to go potty as well (and went) so that's progress). I took him to the bathroom to change his diaper and see if he'd finish up his business in there.

His diaper was filled—TMI warning—with little poop pellets (similar to what you'd find trailing behind a rabbit or deer). The diaper he had on was one that, though wonderfully absorbent, is incredibly bulky and I can never seem to get it to fit snugly around his legs. We rarely wear these ones out and about anymore (we could get away with it when he was younger but now that he's mobile he has more issues with these diapers) but they work great for around the house. Usually.

I finished changing his diaper, this time putting him in a prefold, which has become my diaper of choice. These highfalutin, newfangled diapers are nice but they come with a price tag and—from my experience—start leaking sooner than prefolds do. Many of our once-beloved BumGenius diapers have begun to leak, unfortunately, while our prefolds are still going strong (though I just learned that my go-to diapering store (which I haven't used for quite some time) no longer carries dappi diaper covers (fortunately Amazon does)). Granted, I don't know that you're supposed to get 6+ years of use out of a BumGenius cover (in their defense, the inserts are in fine shape; it's the covers that are falling apart (admittedly, I've bought some cheaper covers to replace some old ones in the past (when Miriam was a baby...and I might've even gotten a few for Benjamin) when CottonBabies have had a "seconds" sale (a sale for diaper covers with aesthetic issues))).

I find myself always trying to remember which BumGenius covers leak and which ones don't. Usually this isn't a problem because Benjamin does try to use the potty during the day so he doesn't usually end up soaking his diapers. It is problematic at night, though Benjamin seems to get rashy if he wears a cloth diaper overnight so we've been putting him in disposables (it's terrible on the environment and on the pocketbook but it makes for a happier baby bottom so it's worth it, I suppose).

Anyway, prefolds are my favourites to work with. Even with pins. So that's what I put Benjamin in.

Now back to the story...

The kids finished their little play-doh games and I asked them to work together to get everything cleaned up.

"Don't forget to check the floor," I warned them. "I see some pink play-doh on the floor...and some yellow play-doh...and some purple play-doh."

There was a lot of play-doh on the floor. The kids scrambled around picking up the little pellets of play-doh from the floor. We finished clearing the table. Then we had lunch.

Suddenly Rachel rushed in to find me. "Benjamin is pooping through his pants!" she tattled.

"Surely he's not," I said. "He just went potty! And he had a poopy diaper! There's no way he's pooping through his pants!"

"Oh, dear," I said. "This means that there is poop somewhere in the house. Benjamin didn't poop through his diaper—he sat on some poop. We have to find it."

We searched high and low (but mostly just low) and eventually found a matching poop smear on the kitchen floor. One of his little poop pellets must've fallen out of his diaper before I found him. I cleaned up the mess and we went about our day, completely forgetting about having poop on the floor (these situations get easier and easier to forget about the more I have to deal with them).

The kids and I were cleaning up the house prior to dinner when I noticed a rogue ball of play-doh on the floor near the table.

I went to pick it up but when I squatted down it no longer looked like play-doh. It wasn't quite purple or black or green. It was kind of a brownish-yellowish colour. And it wasn't as smooth as play-doh usually is. It looked a little clumpy.

And then it hit me. This wasn't a ball of play-doh at all. It was one of Benjamin's poop pellets.

I cleaned it up, being careful to check around for more. I didn't see any on the floor but I eyed the play-doh suspiciously.

If Benjamin's poop pellets were about the same shape, size and colour of any of the play-doh balls that had been rolling around on the floor, and if my hard-working (they'd say slave-driven) children scooped up any of those poop pellets along with some similarly shaded play-doh pellets, we had some potentially toxic play-doh on our hands.

But I didn't feel like checking—we were in the middle of getting dinner together and I was kind of done dealing with poop—so I left the possible biohazard on the shelf to deal with another day.

Since we've been playing with play-doh every single day it didn't have long to sit on the shelf. Now I find myself sniffing jars of play-doh as I open them and watching carefully as the clumps of play-doh tumble to the table, praying that no poop pellets be found. So far we haven't found any but I'm not sure we've checked the purple play-doh yet.

One of Miriam's favourite things to do with play-doh is to play bake sale. She and I work together to make a beautiful display of cookies and cakes and then sell them and/or "eat" them. 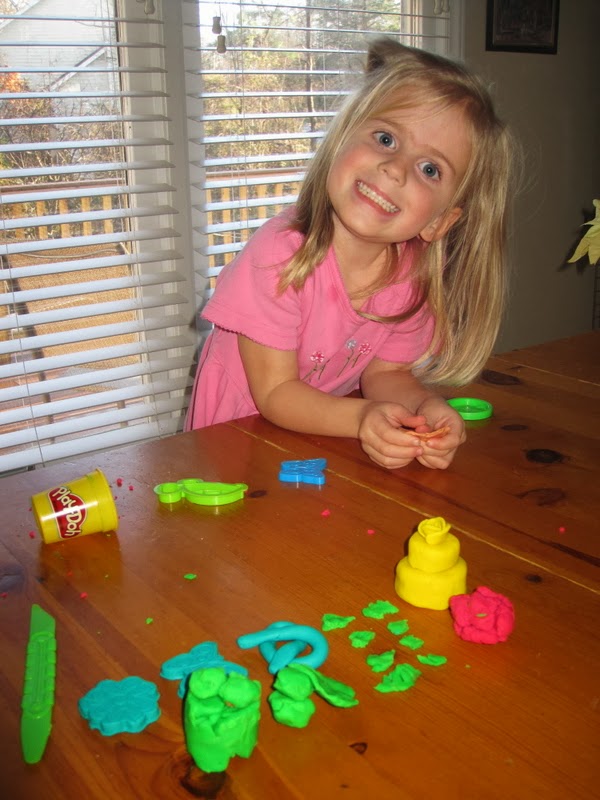 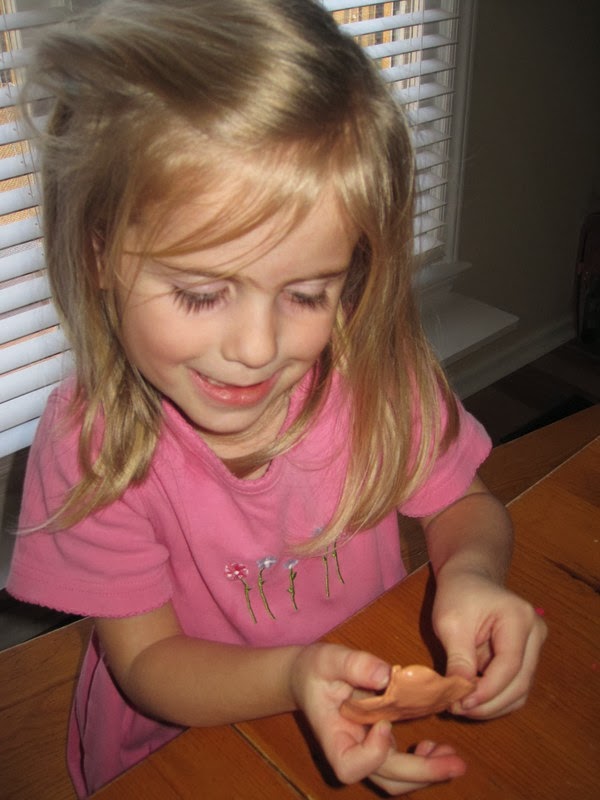 Sometimes Benjamin helps, too (but only when his diaper fits snuggly around his legs). 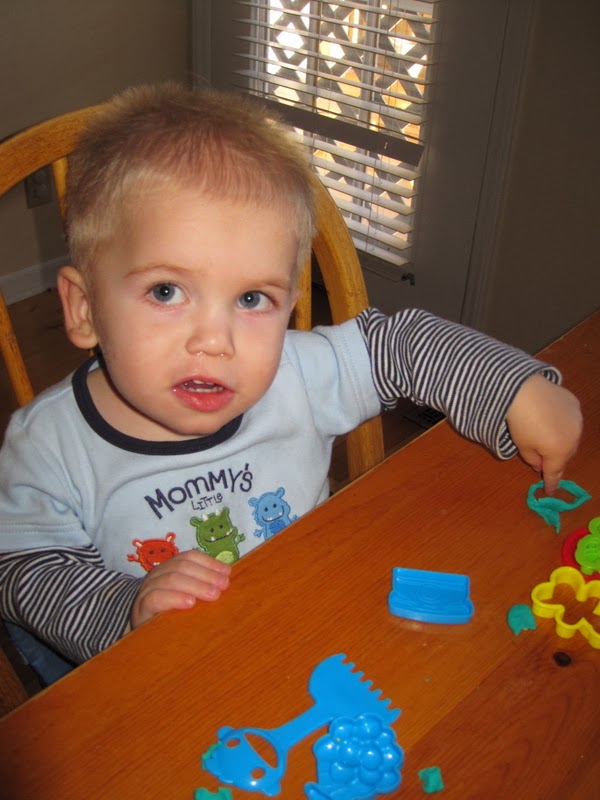 Yesterday we were playing bake sale yet again (the pictures above are from Tuesday's bake sale) when Miriam got out the black play-doh.

"I want to be as good of a baker as you are when I grow up," she said, breaking off a chunk of black play-doh, rolling it into a ball, and smashing it flat as a pancake. "So I'm using the black play-doh to make some burned cookies...because that's what you always do!"

My kids are just bitter because the last time I made cookies (on New Year's Eve) I burned the first batch. But only the first batch. It's not like I burn cookies all the time! Sheesh!
Posted by Nancy at 11:49 AM