When I was eight or nine years old our family sat around the Christmas tree opening presents (as families are wont to do on Christmas mornings). My dad tossed me a present from my Auntie Arlene, who was mysterious—she lived all the way in California!—and beautiful and always sent the coolest presents. Everyone watched while I opened the package (since that was part of our tradition) to reveal...a nightgown that was far too big for me with the words There's No Business Like Snow Business trailing across the front. I think there was a dancing snowman and moose on it.

I tried to be so grateful for that nightgown. I remember holding it up with an awkward smile on my face and announcing, "I don't get it..." because I had never seen Annie Get Your Gun (and, actually, I still haven't seen that but I've at least heard enough of it to be familiar with it—twenty years earlier I was completely in the dark about it).

It took us a minute to get everything sorted out. My mom explained to me why the nightgown was funny but we didn't figure out until later that the nightgown was actually for her not me. I had gotten something completely different—I can't even remember what. The gifts had been mislabeled or something.

Twenty years ago, though, I still found snow exciting. We lived on the west coast where snow was rare and fleeting. It meant fun and games, not bitter cold and drudgery. I learned to dislike snow during the five years I spent in Alberta and that dislike carried into the years that I lived in Utah (though winter wasn't quite as cold or long) and continues to this very day.

That's why I'm so glad we live where we do because winters are so mild here that the lack of snow is beginning to rekindle some fondness for the stuff. Instead of seeing the first snow of the season and retreating into a pile of blankets with a book...

...I'm able to face the 'cold' and celebrate the snow with my kids. Or at least with most of my kids. Benjamin wasn't celebrating. In fact, he was quite traumatized by the whole situation. I mean, frozen fluff falling out of the night sky? It's unnatural. And terrifying.


Benjamin spent the whole time we were outside either howling with the wind or giving the snow a piece of his mind. One minute he'd be standing there sobbing and the next minute he'd be gesticulating wildly while yelling nonsense.

The girls were in a little slice of heaven.

Miriam announced that this was her "best life ever!" Whatever that's supposed to mean. 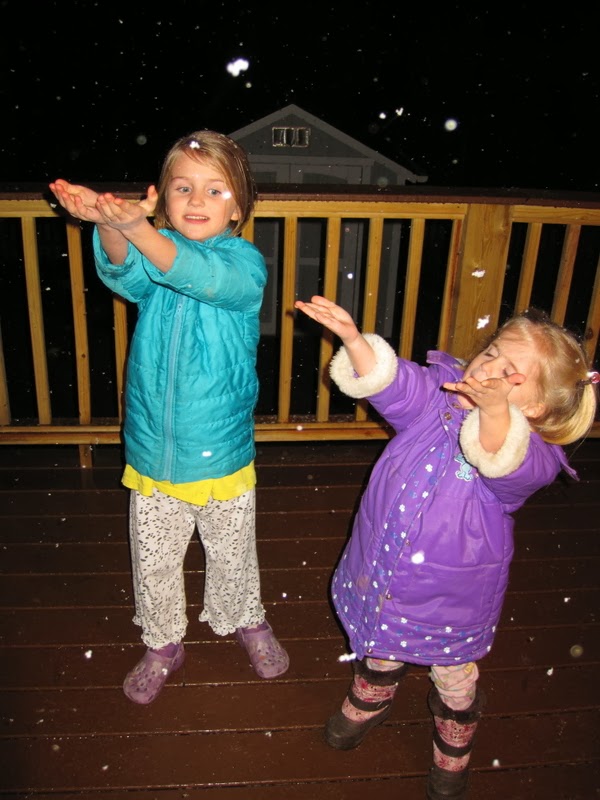 Rachel outlined the whole of tomorrow. Her school is on a two-hour delay schedule but she's not planning on sleeping in. She wants to get up to play in the snow! And then she thinks I should make oatmeal with apples cooked right in it because that's what I did last year so it's tradition (I don't even remember doing that—I mean, I know I've made an apple oatmeal recipe in recent history but it's not linked to a snow day in my mind). 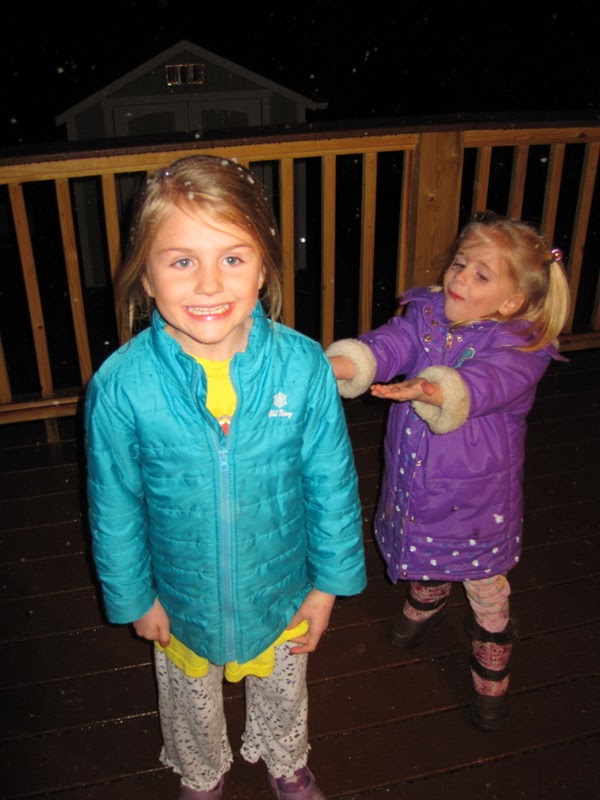 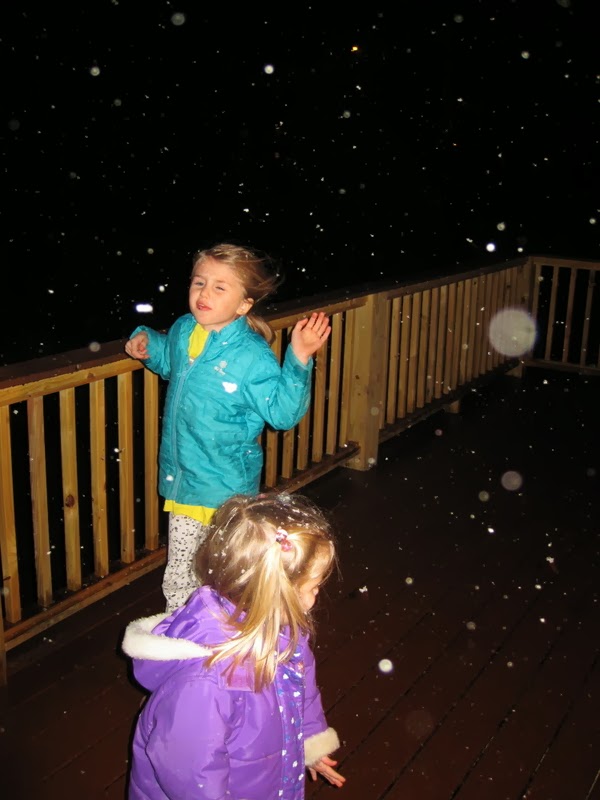 We had fun running around on the deck but it wasn't enough! We had to go for a full walk around the neighbourhood, too.

Rachel said she felt like she was floating in space with stars zooming all around her and was quite pleased with how this picture turned out because it looks just like how she imagined—like she's walking in outer space: 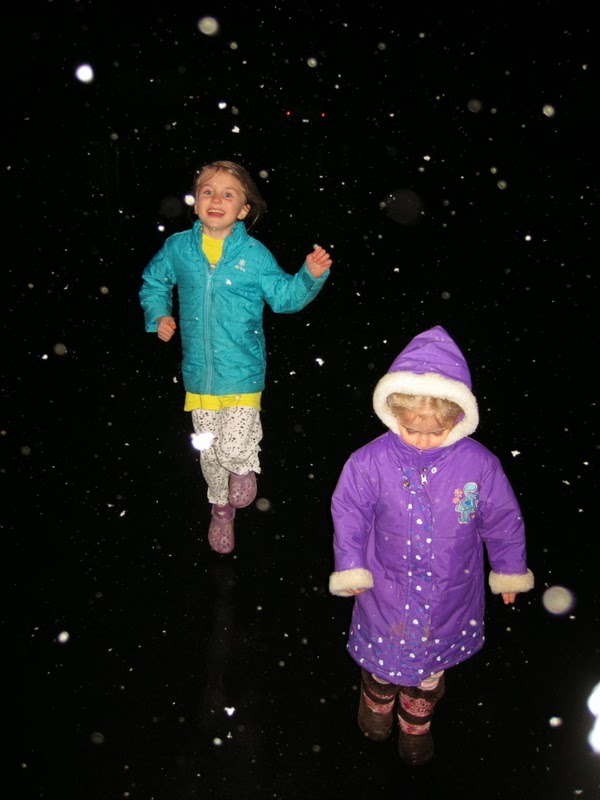 Benjamin was less impressed with our walk but he had, by this time, quieted down a bit and was just glaring at the snow suspiciously. 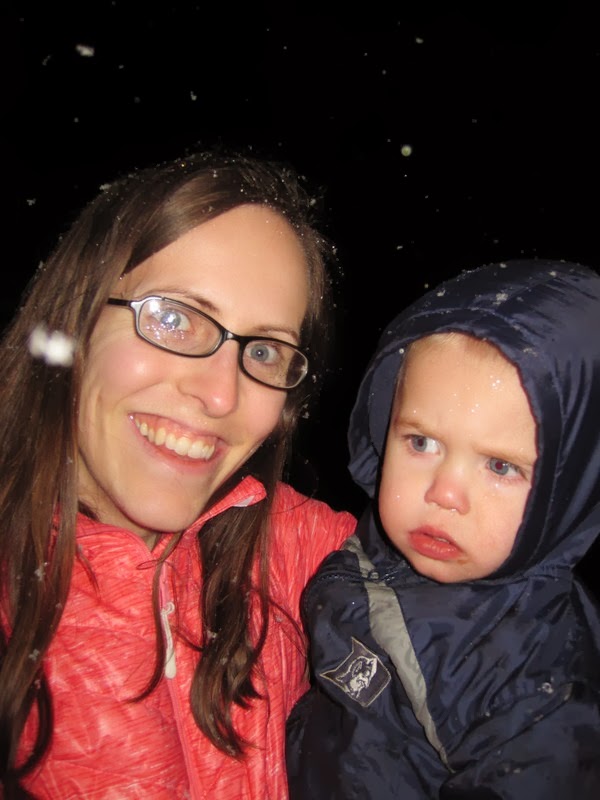 (He's got a chocolate smear under his lip because we had been playing Don't Eat Pete with some leftover Christmas M&Ms when we realized it was snowing). 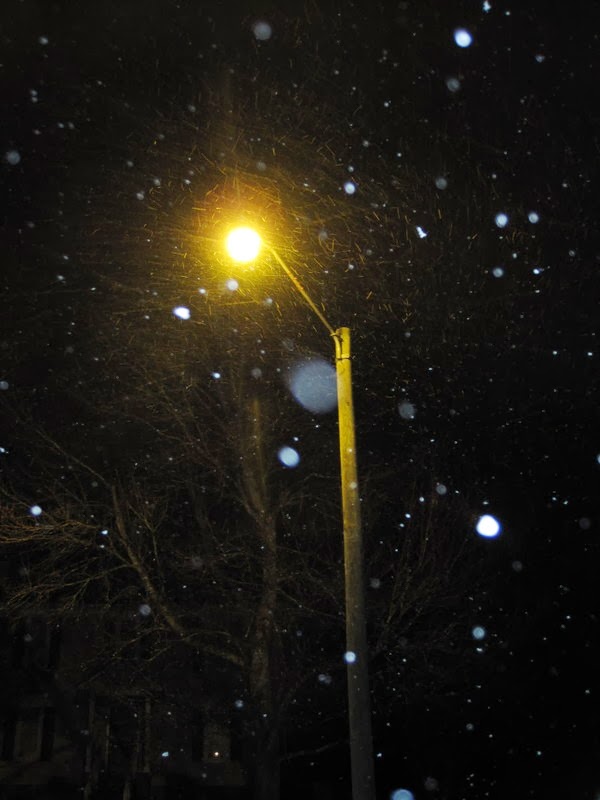 I tried to convince him to get down and walk around but he wasn't fond of that idea.

The snow was beginning to stick to the grass by the time we got home from our walk (and it's been snowing ever since though we still only have a light dusting out there). 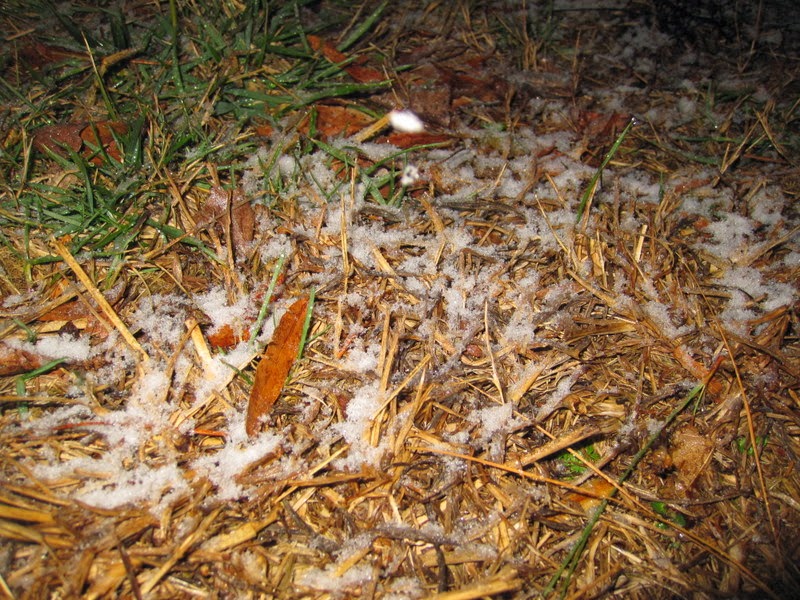 The girls were excited to warm up inside. Benjamin was, of course, ecstatic and relieved to be heading indoors. That snow was a little too crazy for him. He can totally understand why after-school programs were cancelled and why school's already delayed for tomorrow. He's grown up in the south. 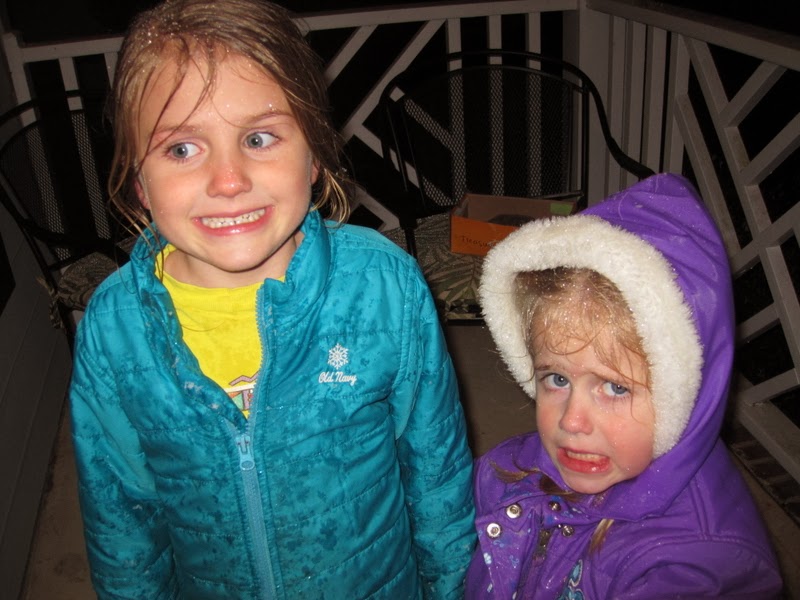 The kids found the quilts Grandma made for them and snuggled on the couch together until they were nice and warm again. 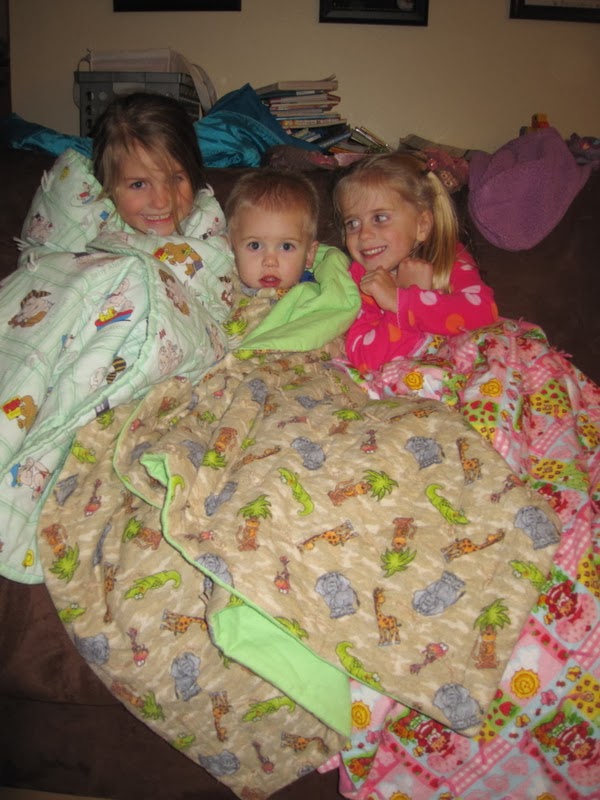 I don't mind a two-hour delay every now and then. We get to have a quiet, relaxing morning in the middle of the week and we don't have to make up the day later (as we'd have to if the whole day were cancelled). It's not a bad deal.
Posted by Nancy at 11:41 PM