It's time to do some gentle sleep training at our house. I came to this decision a couple of days ago when I was still rocking Benjamin to sleep at around 11 PM after he'd been up since around 8 AM and had been up a couple of times in the night, as per his usual.

Some kids are easy to sleep with. Miriam was one of those kids. She falls asleep and wakes up in the same place. She's fallen off the bed maybe five times in her life. She doesn't kick or toss and turn. She hardly even has to brush her hair in the morning because when she wakes up it's as if she hasn't even lain down.

Rachel hates this because when Rachel wakes up her hair is a complete rat's nest. She thrashes, kicks, tosses, and turns. She used to end up on the floor nightly (it was a brave, brave move to put her on the top bunk but it has a railing so she hasn't ever fallen off (yet)). She knocks things off the dresser and onto the floor. Perhaps worst of all, she talks in her sleep. When she was little we called her "ping-pong baby" because whenever we checked on her she'd be in a different position—a different corner of her crib. She'd always get her limbs tangled in the bars of her crib. She'd bump her head as she shifted positions. She was the saddest little sleeper...but we couldn't sleep with her because sleeping with Mom and Dad didn't seem to settle her down at all.

She was kicked out of our bed quite early in her life. Miriam, on the other hand, slept in our bed nearly 100% of the time until we moved to Utah (when she was eight months old). She'd fall asleep in the crook of my arm (or—get this!—she'd just fall asleep on her own) and wouldn't move the entire night (except to nurse, but only once, and always at 4 AM—her circadian rhythm is clockwork).

Benjamin falls between these two extremes, I think. He certainly isn't a sleep-lover like Miriam, but he's not as bad as I remember Rachel being. I'm not sure if that's because I've changed as a mother (I've spent the last few years building up an immunity to sleep deprivation) or if it's because he really isn't as spastic of a sleeper as Rachel was/is.

At any rate, he's spent most of his nights sleeping in our bed lately and although I enjoy cuddling with him I'm tired (in more than one way) of being punched in the face or kicked in the stomach as he flops around. By the end of the night he's taking up the majority of the bed, leaving Andrew and me clinging to the edge of the bed for dear life. It's time to reclaim our bed. I need to sleep for just a couple of hours in a row (that's all I ask).

Yesterday I took the front rail off of Bejamin's rarely-used crib and turned it into a toddler bed. Part of me was wondering if I was crazy for doing it because this meant there'd be no place to contain him but then I realized that we never used the crib for containment purposes anyway. Benjamin tweaked his screams and squawks until they're the exact pitch and timbre that drives me instantly insane enough that I will do anything to get him to stop. Usually picking him up will do it so I never let him just cry anywhere (because insanity).

Needless to say, the cry-it-out method isn't going to work for us—I can't stand the screeching—so we'll be going with a gentler method.

Both Miriam and Benjamin were excited to play in Benjamin's "new" bed and once the crib front came down and the toddler railing went up I let them play to their hearts' delight, hoping that such happy playtime would help improve Benjamin's relationship with his bed. 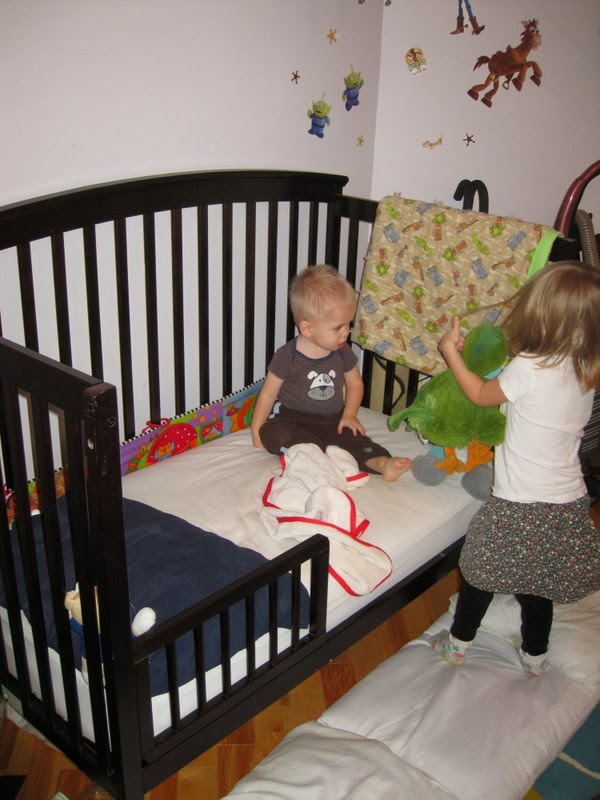 In the afternoon I was able to nurse him to sleep and transfer him to his bed. I think the transfer went a lot smoother because I didn't have to lean over the edge of the crib and basically plop him in (as gracefully as possible...but low crib mattresses don't really lend themselves to much grace when transferring a sleeping baby). With the front railing gone I was able to kneel down and put him in bed gently. He had a successful nap. 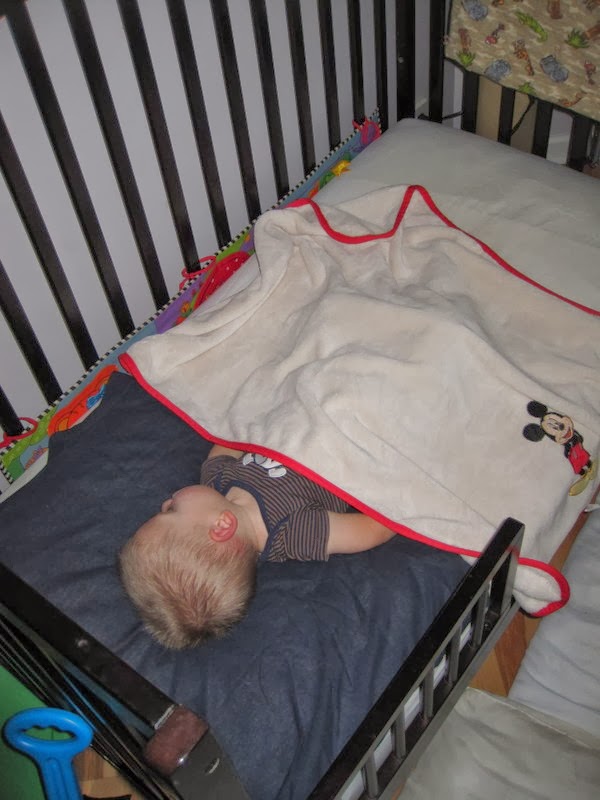 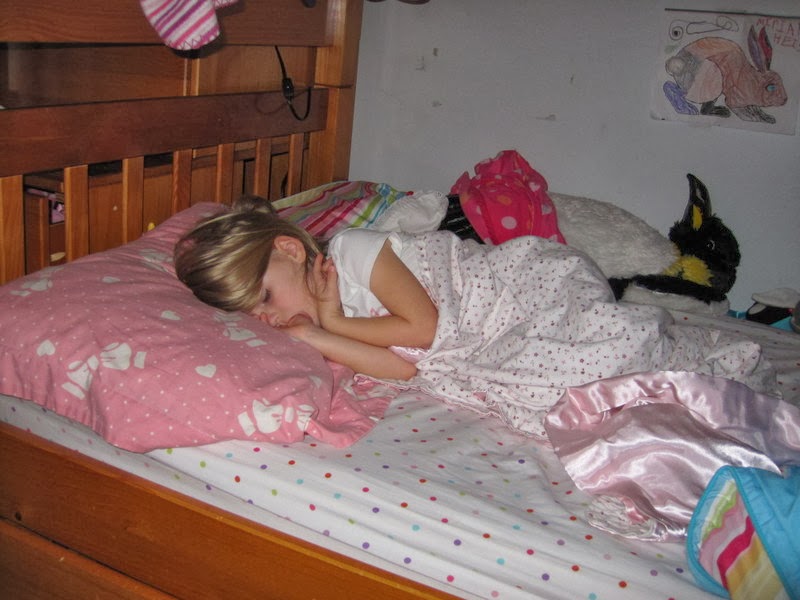 She went to her room for quiet time while I nursed Benjamin and after I put him down I went in to check on her. Often she'll have set up an elaborate game of some sorts but sometimes she'll be resting on her bed. She doesn't usually nap anymore but this afternoon was an exception, I suppose, because she was fast asleep.

(She's working on not sucking her thumb, by the way, and now she only sucks when she's really tired (usually)).

Her nap was explained when she woke up sick.

Anyway, we had blueberry pancakes for dinner (courtesy of Daddy) and then went to the library to get some new books. I checked out Does My Head Look Big In This by Randa Abdel-Fattah (because I haven't read it yet) as part of Benjamin's sleep training. I'm reading some other books but they're a little weightier and I didn't want to be reading something I had to try to wrap my head around while feeling frustrated. I wanted some fluffy reading.

We had story time, scriptures, and prayer, as per the usual. Benjamin helped me sing lullabies to the girls. After we said goodnight and closed their door I got Benjamin into his pyjamas and asked him to climb into bed.

He immediately threw himself on the floor and started sobbing.

I picked him up and carried him to his bed, instructed him to lie down, and tucked him in. I sang him his own lullaby, stroked his face, and patted his tummy (he loves having his tummy patted as he falls asleep and will even pat his own tummy). When I was tired of doing this I explained that I was going to lie down on the floor next to him and read my book until he fell asleep.

He started fussing again so I told him that if he was going to cry I was going to leave the room. He's old enough to reason, I guess, because that shut him up pretty fast. He gulped down his tears and put his head on his pillow.

I only had to ask him to lie down three times before he gave up trying to sit up or get out of bed. He reached his little arm through the bars of the bed rail and patted my shoulder while I read. He twisted around and kicked the wall. He ran his hand across the crib rails—plink-plink-plink, plink-plink-plink. He sighed and flopped onto his tummy. He shifted onto his back, lifted his legs up, and let them thud onto the mattress (over and over again).

I read my book and did my best to ignore his shenanigans.

I slipped his arm off my shoulder and pushed it back through the bed rail before slinking out of his bedroom.

That wasn't so bad!

When Andrew and I went to bed we left Benjamin's door open a crack so that he could come to our room by himself (rather than making me get out of bed to open the door, etc) should he wake up in the night (which, let's be honest, is something I plan on—he even knows that I won't nurse him at night anymore but he still gets up (and instead of weaning himself after I cut out nighttime nursing sessions (like Miriam did) he's all, "That's okay, Mom! I'll just ask to nurse twice as often during the day!" So basically he's never going to wean).

I didn't hear a peep from him until about 1:30 AM when I was ripped from my sleep.

"MOOOOOOM!" Benjamin roared. His feet pounded across the hardwood floor as he bolted from his bedroom.

I jumped out of bed (because...adrenaline (his screaming sends me through the roof)) and met him in the middle of the living room where he collapsed into my arms.

"Momma," he crooned, snuggling into my neck.

Breaking possibly every sleep-training rule in every sleep-training book, I brought Benjamin into bed with me. We fell asleep and although I got punched in the face a few times in the middle of the night I was at least grateful for the couple of hours of sleep I got before the wiggle worm joined us.