We had our second to last show tonight and our last dress rehearsal last night. I've been snapping pictures like crazy trying to make up for lost time because I simply didn't bring the camera to much of anything beforehand. We were kept so busy with "if you're not singing then be dancing" and "if you're not dancing then be singing" and "if you're not singing or dancing do something else" that there wasn't a whole lot of time for capturing memories. But a girl in the cast is working on a scrapbook and asked for photos, which is when I realized that...there weren't many.

So I stared bringing around my camera.

You guys! Kids these days don't know how to use cameras. They were all like, "What? People still use those?" And when I assigned one of the youth to a picture (of our Toot Sweets gang) I actually had to have him do it twice because the first time he tried he didn't actually take any pictures.

My camera isn't touch screen. You have to actually press a button. How archaic!

Honestly, though, I don't think cell phone cameras have caught up with the quality of a good ol' point'n'shoot (at least not the calibre of phone I'm carting around).

So, without further ado, here are some pictures of Thursday's dress rehearsal...

Here are my sweet little Vulgarian children with their friend Carolina, who is ready for the Fun Fair: 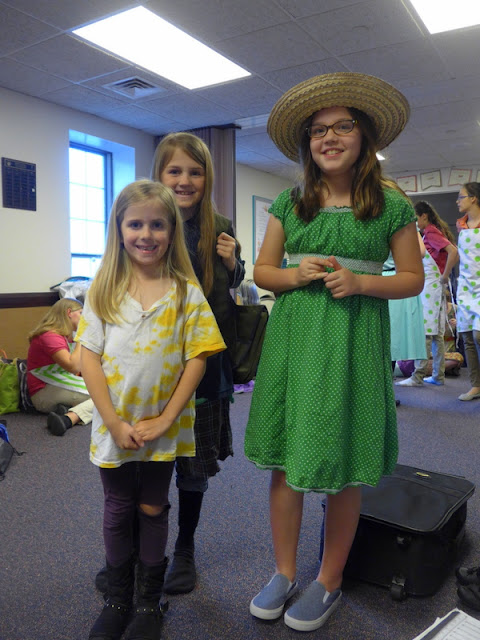 And here's Miriam with her friend Eva, who is dressed up as a poodle (she knows Eva from preschool): 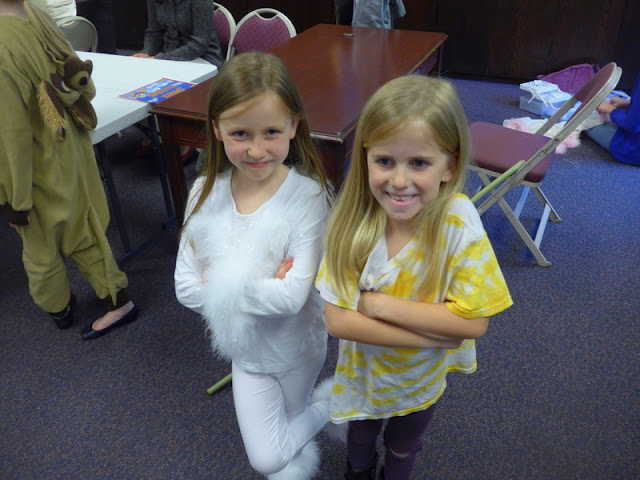 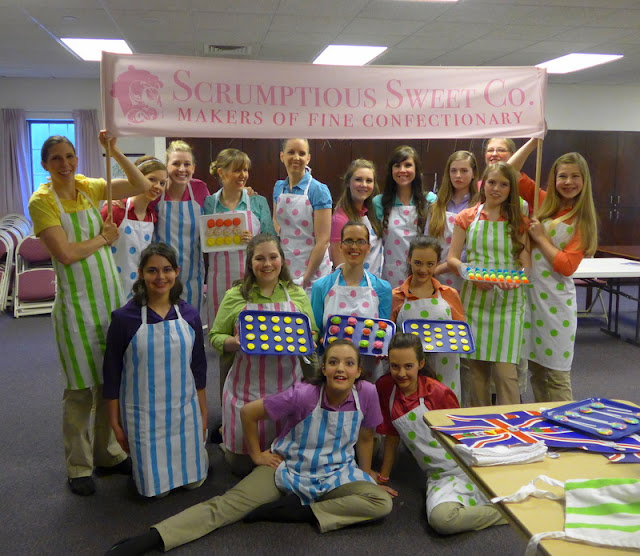 I wish that table wasn't in the way. Maybe I'll make everyone pose for yet another picture tomorrow...

Someone took my camera and took a couple of pictures of Me Ol' Bamboo, except I guess they didn't know who I was because this is the only picture they managed to get with me in it: 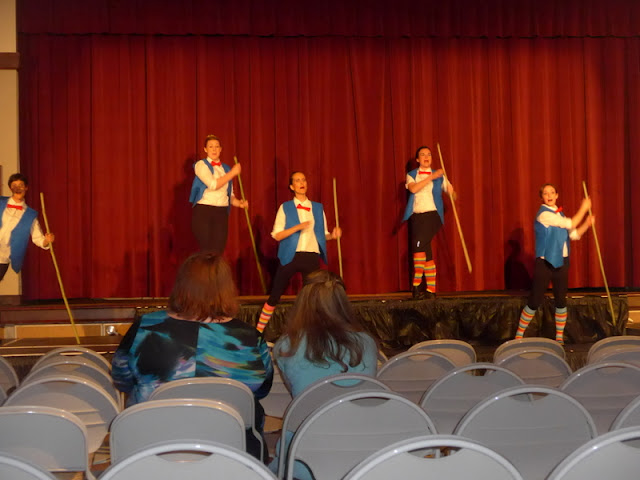 Because it was a dress rehearsal I was able to watch the sewer scene and take some decent pictures of my girls. Miriam's in the middle of the stage, the smallest one, on the right: 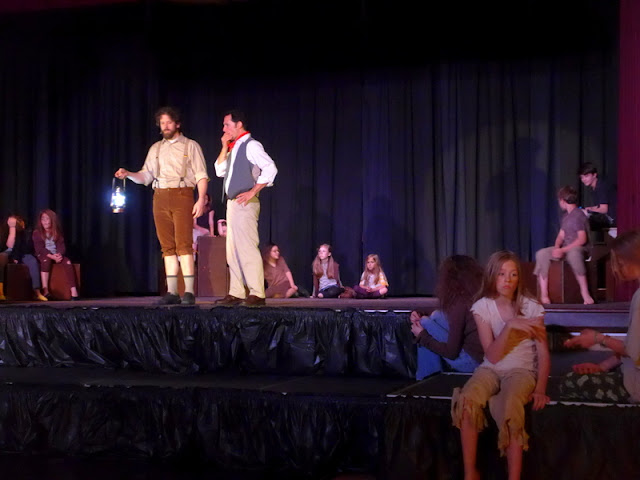 And Rachel is sitting about in the middle of this picture: 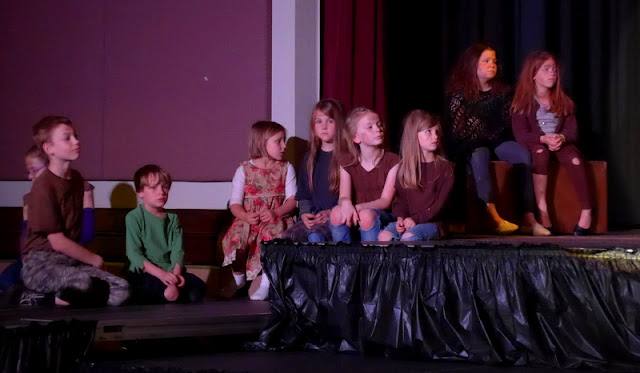 Here's Miriam again, in the middle: 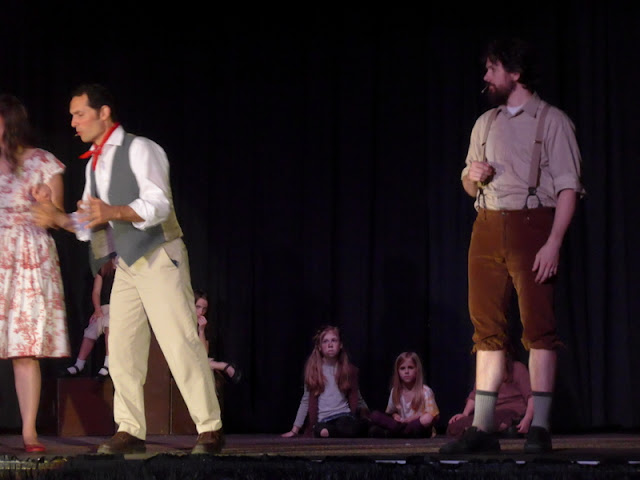 And Rachel again on the left, by the wall: 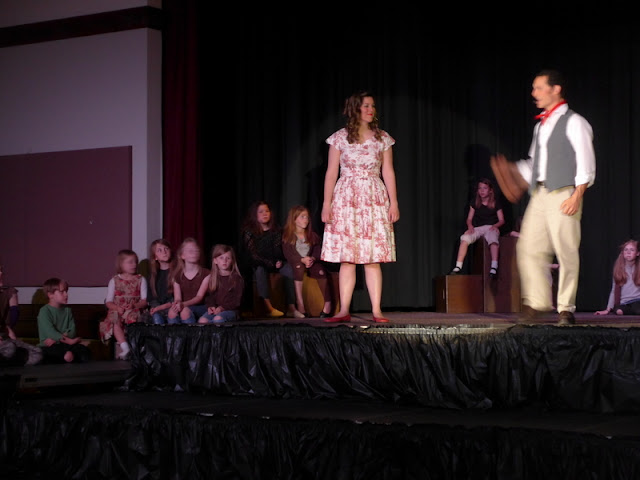 Here's a picture of Miriam joining in on the march (the little one on the left): 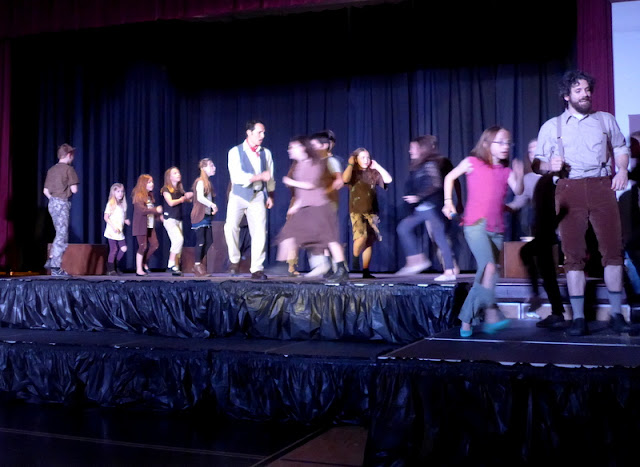 And here's a picture of all the children geared up to storm the castle (I can't see Miriam (she's in the second row) but Rachel is on the front row, ninth from the left...if you want to count that high): 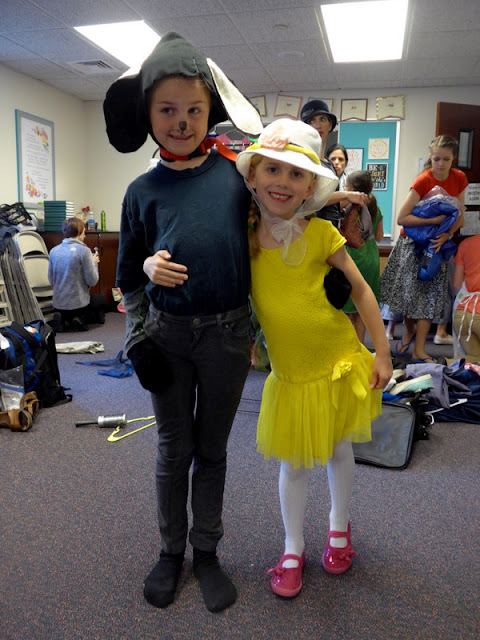 Rachel technically had a different shirt for this costume but it got left at home so she wore her Vulgarian shirt and that worked out fine. 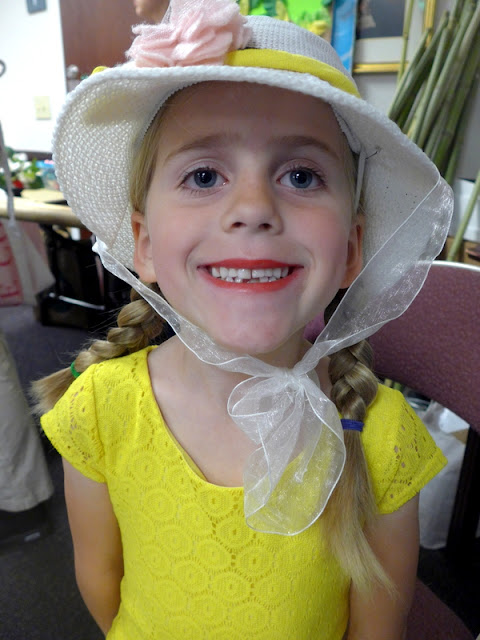 And a little selfie we took together (how modern of us): 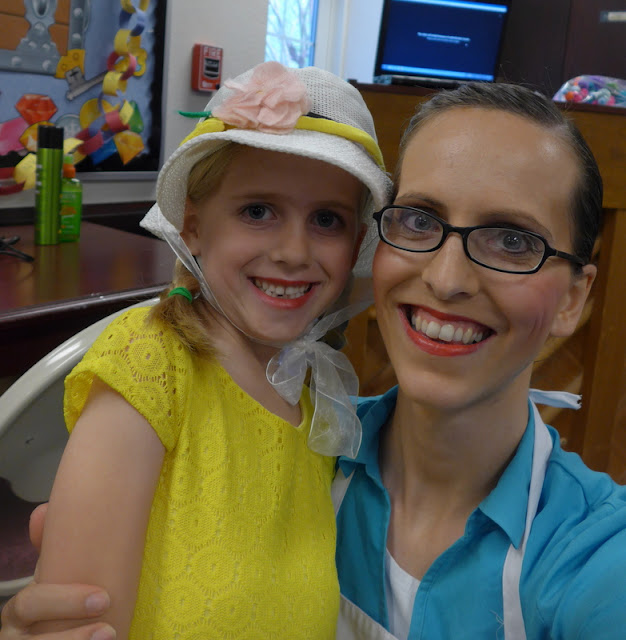 Here I am with my samba partner, Noah (and if you look closely my friend's daughter Lauren's eye is peek through between us): 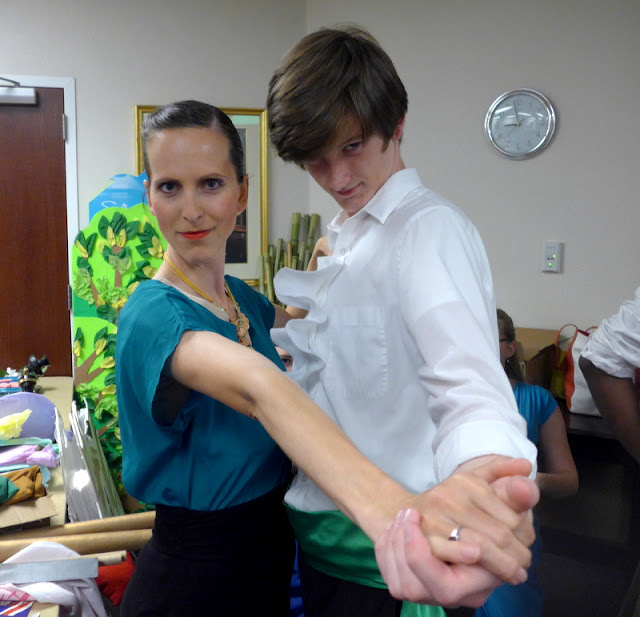 When we first were paired up I figured he was young—fifteen or sixteen—but then he said, "What do I do? I haven't really danced with a girl before and I don't really know where to put my hands or..."

"What do you mean you haven't danced with a girl before?!" I asked. "Surely you've been to a stake dance..."

Well, that explains it (because to go to a stake dance you have to be fourteen). He's younger than half of my nephews! I gave him a quick tutorial and he's done just fine.

We had several people come out to support us last week, including Grandma, Miriam's TA and her kids, and our next-door neighbours. This evening one of Rachel's good friends came with her mom and they brought a little bouquet for both Rachel and Miriam, which was so sweet.


They were both delighted with their flowers: 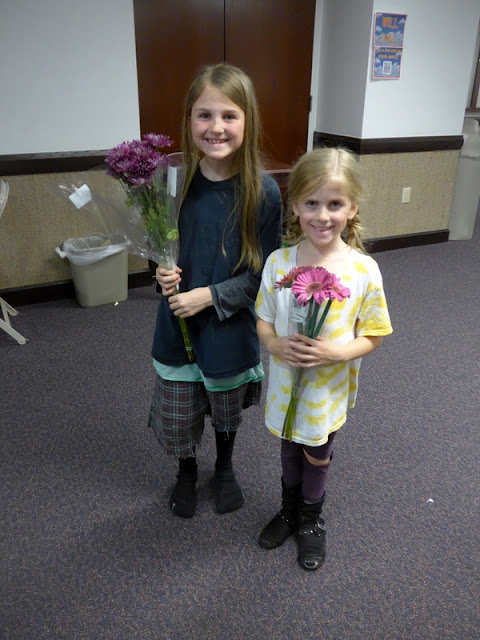 Oh, and here's Benjamin with his sisters: 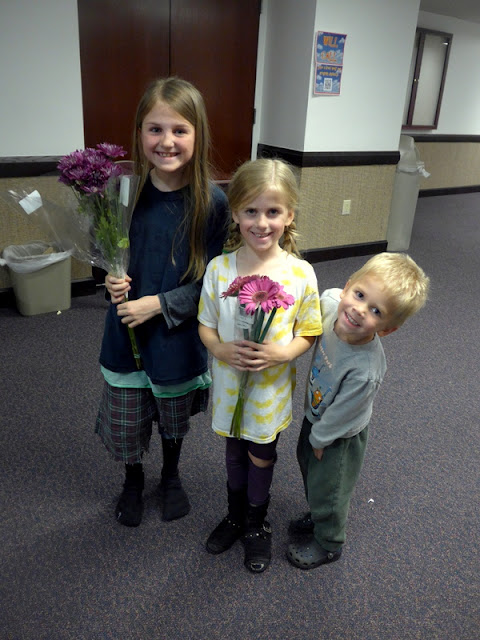 He got to watch the second half of the show tonight. We had a frazzled afternoon (with the girls' school bus being super late to name one thing) and I forgot part of my costume at home so Andrew took Zoë and Benjamin home to retrieve it during the first act. Luckily I didn't need the things I forgot until the second act!

After the show Benjamin and Andrew were waiting around for the girls and me to finish changing when the child-catcher walked by. Benjamin cowered behind Andrew, and understandably so because that child-catcher is terrifying!

Well, someone else in the cast (I'm not quite sure who—it someone with a beard in the samba, that's all Andrew could tell me) leaned over and said to Benjamin, "You know, if you bite him on the leg he'll leave you alone!"

Benjamin responded by hiding himself behind Andrew completely. He wasn't about to take advice from a stranger! But after that advice sunk in it must have resonated soundly on Benjamin's internal barometer of truth because before Andrew could stop him, Benjamin took off toward the child-catcher and bit him on the leg, as instructed. The poor child-catcher yelped with what I hope was surprise, not pain.
Posted by Nancy at 12:56 AM