A little bit of Japan

Today while we were walking we spotted this beautiful star magnolia and had to take a closer look. 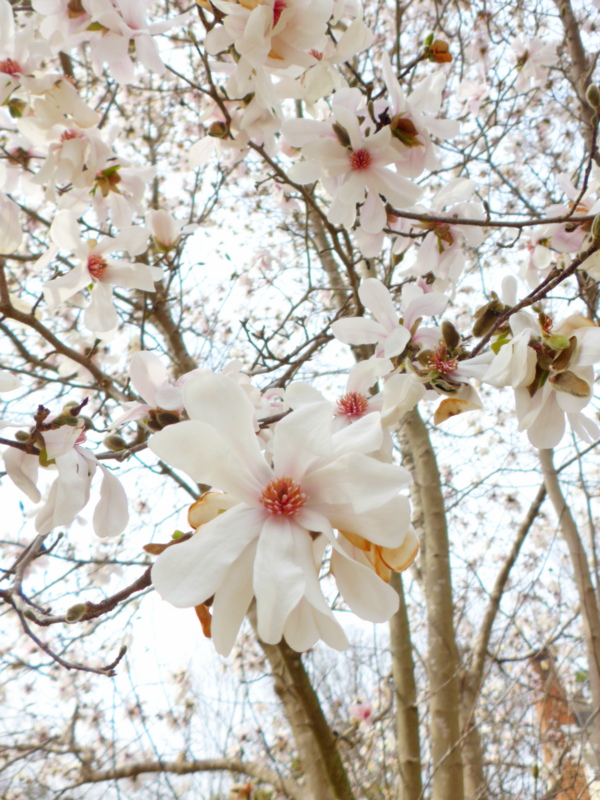 I think we may have managed to get through this winter with one, solitary, shut-the-city-down-for-five-days snowstorm, and it looks like spring is on its way. This isn't the only tree blossoming in the neighbourhood. Callery pear trees are also unfurling their (stench-filled) blooms. When we see those beautiful popcorn-esque trees we are sure to steer clear. But these blossoms looked different—thus the call for further investigation—and it turns out they were different.

We thought they were rather beautiful, but I didn't know what they were off the top of my head because the most common magnolia out here is the southern magnolia—and it's an evergreen. The star magnolia is deciduous, so I didn't even recognize it as a magnolia (botanist I am not).

It's native to Japan, so I'm sure it's a lot more common there than it is here. Lucky Japan.

Speaking of Japan, our dear friend Amanda moved out there this past fall (shortly after we visited her in DC (lucky Japan)). This past week we got a package in the mail from her, full of all sorts of love from Japan—the packing peanuts were hearts in various shades of pink (the kids thought they were to die for). Aside from packing peanuts (which were terribly exciting), the box contained chopsticks for everyone and a variety of Japanese snacks for us to sample.

We made fried rice for dinner tonight (not very Japanese, I suppose, but we had leftover rice, so...) and broke out our new chopsticks. 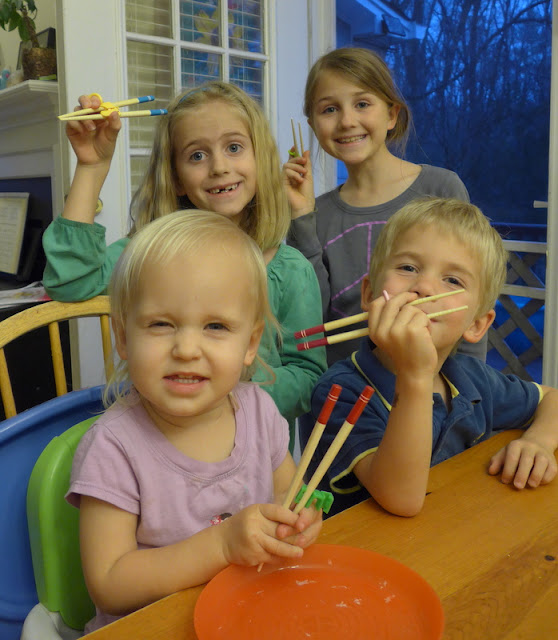 Dinner was a comedy of errors, as meals with chopsticks so often are (at least on this side of the globe). Here are the kids patiently working away at their dinner: 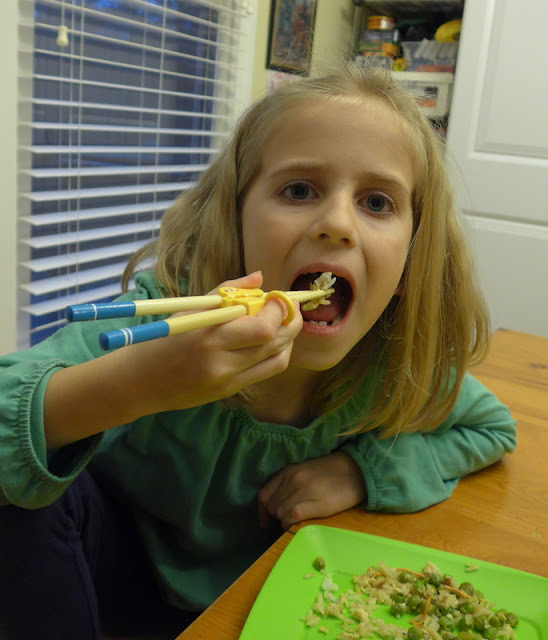 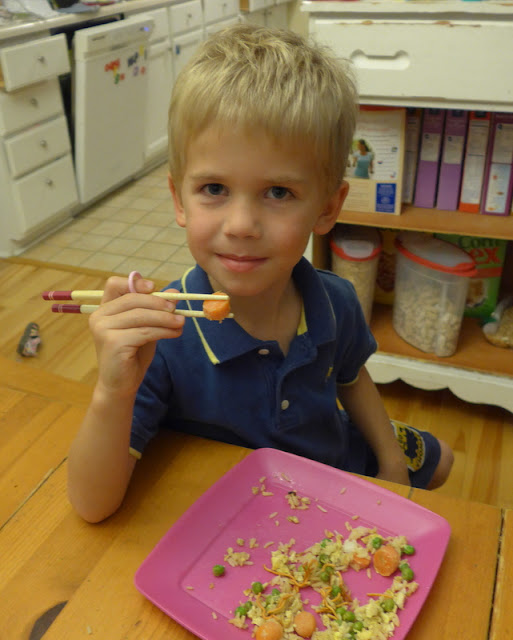 Zoë mostly gave up on chopsticks and used her hands to stuff her face, but that's usually how she eats anyway. 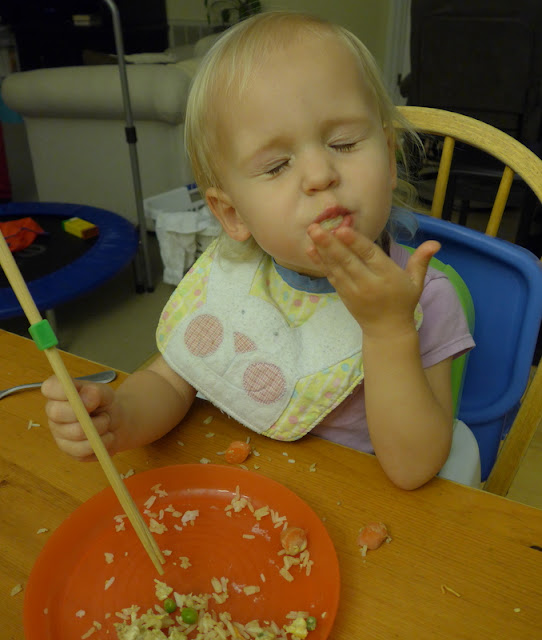 The difficulty of managing chopsticks seemed to motivate her to actually try her fork: 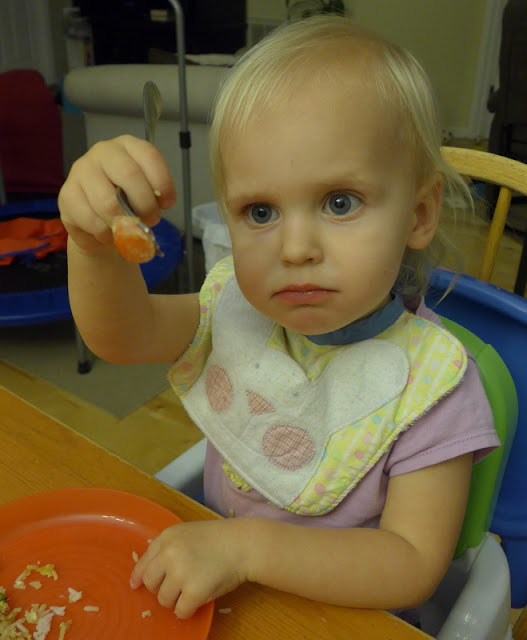 We topped our rice with these Baby Star Noodles (which everybody loved): 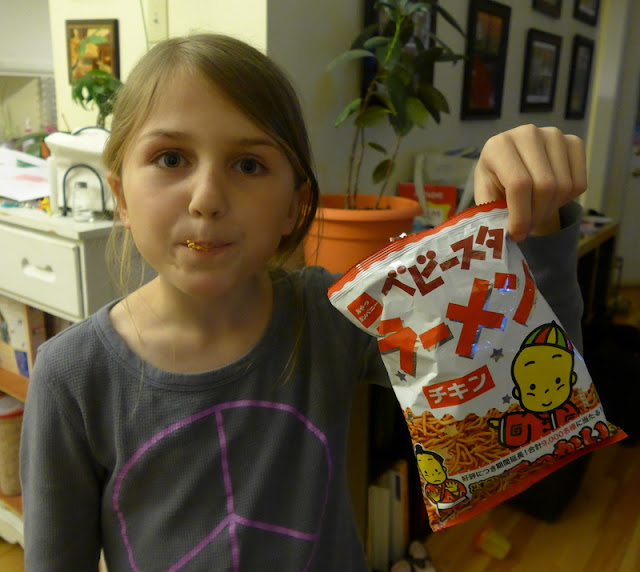 Amanda and I both took Japanese in high school. My Japanese is so rudimentary (and rusty). It took me forever to figure out that most of what I was trying to read was in katakana instead of hiragana (the latter of which is much more firmly rooted in my brain). I was like, "How did I forget everything I ever used to know?!"* And then I was like, "Wait a minute. This is katakana. I've got this."

And with a little bit of help from our friend The Internet, I totally did.

I've been a little surprised at how little English there is on the packaging! Other places I've lived/visited have always had a billion languages on their packaging. Not so with this. It's pretty much all in Japanese. Which is fine, just surprising.

But then, the katakana you see in the red box, which states the flavour of these noodles, spells out "chi-ki-n" otherwise known as "chicken" in English. I am almost positive that we learned chicken was "tori" in Japanese class, but it seems "chi-ki-n" is actually pretty standard (at least as far as food goes).

Huh. Makes it easier for me/you learn something new everyday.

Thanks so much for sharing a bit of Japan with us, Amanda (and keep the pictures/posts coming so I can continue to live vicariously through you)!
Posted by Nancy at 9:31 PM