Zoë is an explorer at heart. You can tell her something and she'll totally understand what you're saying. She just won't believe you until she checks it out for herself. I'm hoping she'll grow out of this at some point because I think learning through the experiences of others is a whole lot easier than learning through your own experience, which is why reading is such a great thing to do. I guess lessons are internalized a lot faster when you learn them firsthand, however, and now Zoë knows the word 'hot.'

I was making something in the kitchen a couple of weeks ago (January 17) and I had the oven preheating while I was using the stand mixer on the other side of the kitchen. Zoë walked into the kitchen and I warned her about the oven being hot.

"The oven is hot. Don't touch," I told her, and then I turned my back on her to attend to whatever I was making in the stand mixer (it's a mystery; I can't remember what I was making). I don't think I'd even resumed my task before Zoë let out an ear-piercing scream. I spun back around to see her writhing on the floor, screaming her lungs out.

I scooped her up and inspected her for injuries. "What happened, baby?" I asked. She clearly hadn't opened the oven door (she can do that, sadly) because I hadn't heard it slam shut. Had she fallen over? "Where does it hurt?" I asked. Had she stepped on something sharp? Had she...oh, no. The broiler drawer was open just a crack.

I grabbed her hands and saw that the fingers on her left hand were covered in burns. 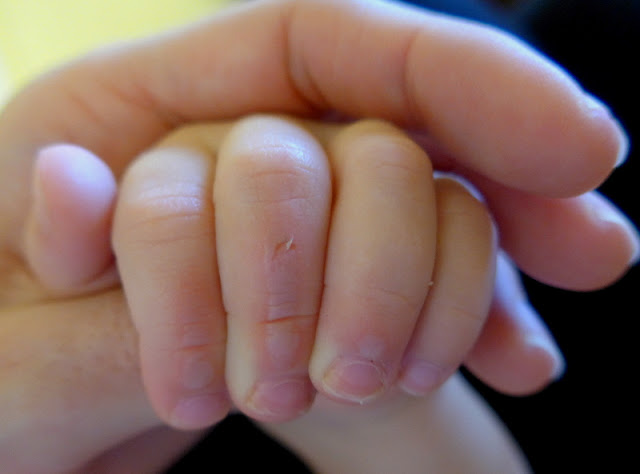 We ran her fingers under cold water until we couldn't stand it, and then repeated that activity all evening long whenever she'd start fussing about her fingers again. Poor baby.

The good news is that she's super vigilant about hot things now.

Life is full of hard-to-learn lessons, but I think she's got this one down (now).

(And she might just end up being a book learner because Rachel loves reading (and learns plenty from books) now but when she was Zoë's age she stuck her finger in a fan, despite my many warnings).