Yesterday morning was a little bit rough, thanks in large part to this cute thing who is, quite literally, screaming into the terrible twos: 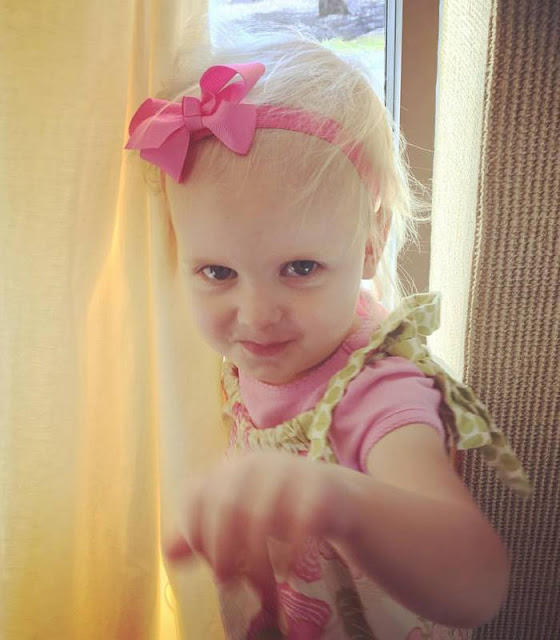 It wasn't all bad, I suppose. Andrew didn't have any early-bird meetings (he didn't leave the house until around 10:00). Benjamin buttoned his Sunday shirt all by himself for the first time. Miriam didn't freak out when she learned that the tooth fairy had forgotten to switch out her tooth for money (she lost a tooth on Saturday night and another on Sunday night, so now she has no teeth...and the tooth fairy forgot both nights because our tooth fairy is a real winner, let me tell you). We skyped with my parents. Rachel was super helpful and got Zoë dressed.

Granted, the outfit that Rachel got Zoë dressed in is not the one pictured because Zoë has become an exploratory pooper. She somehow got poop on her sleeves...and several other places. I wish she would just tell me. Sometimes she does. She'll say, "Oops," or "Uh-oh," or, if we're lucky, "Poop." Other times she won't say a word and I won't know anything about it until she's pulling off her diaper.

And then there was this breakfast fiasco (and, yes, I did break all sorts of blogging protocol and included a picture of the aftermath of Zoë's poop exploration in my collage; but it's my life): 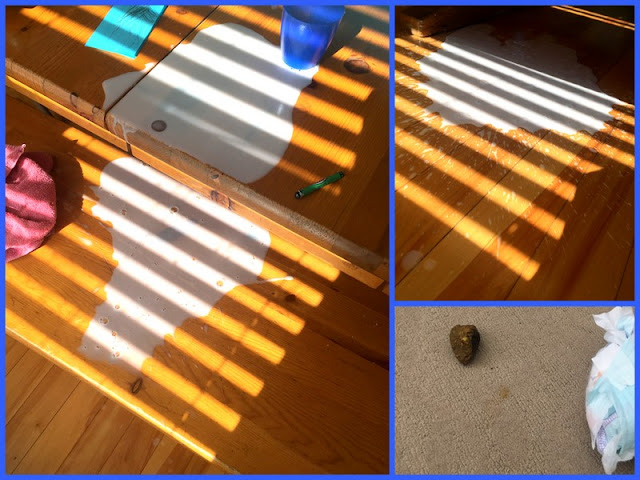 Benjamin had had breakfast (probably, truthfully, brunch) and then wanted to colour so I told him that he needed to clean up his breakfast stuff. He put his bowl in the sink, but left everything else on the table.

Sadly, I wanted the milk put away immediately and he thought I meant eventually (and that is why the phrase "don't worry" is taboo in our household).

I left the room to do my hair. He got out the paper and crayons.

Zoë decided she'd help herself to a cup of milk.

Zoë is too small to pour the milk. Obviously.

At the sound of crashing, glugging, and splashing (along with a chorus of "Oh, no!" and "Oh, dear!"), I ran out of the bathroom screaming at the kids to, "Pick it up! Pick it up! PICK! IT! UUUUUP!" All four of the kids were standing right there, watching the horror unfold. Not one of them made a move until my hand was on the carton (and so if you ask Rachel who picked up the carton she will say that she did it, but if you ask me, I did it).

Needless to say (because the poop incident happened in the chaos of the last five minutes before leaving—when we're all running around making sure we have everything and have turned off all the lights, etc), we were just a smidgen late for choir practice.

But since choir practice is before church, we were plenty early for church!

There's an upside to everything.
Posted by Nancy at 12:21 AM