Instead Benjamin got to help me with the laundry.

Hmmm...I'm suddenly beginning to see why the girls love going to campus with Andrew so much.

We're having such beautiful weather today, though, that we pulled out the clothes line and hung our clothes to dry in the sunshine. Late winter and early spring are so beautiful here. There aren't many bugs out yet; it's still too cold for them. Yesterday it was—literally—freezing. But today? Today was glorious: low 70s, slightly breezy. Just right.

Oh, and our pollen count is pretty low right now as well since spring hasn't quite sprung yet. (I can't hang laundry outside when spring is busting out all over because Andrew suffers from allergies quite terribly).

There's not a whole lot better in life than a row of freshly washed laundry flapping in the breeze. I really can't quite explain it—it mystifies even me—but somehow hanging out my laundry is a pleasure (whereas it would otherwise be a chore). I've written about this before, I know, but I was thinking about why it was so pleasurable once again today as I was hanging out the laundry.

I always think about my family when I fold laundry, whether I'm doing it inside or out (whether it's a chore or not). I examine socks and pants for holes. I ask Zoë who owns various articles (and she usually knows; it's a bit of a game). I wonder about how and when the children got as big as they are (we recently purchased new socks for Rachel—the same size as my socks). I think about how blessed I am to have such wonderful people in my life, how thankful I am that I didn't have to hand wash all these clothes, how grateful I am to have these clothes (often I think about the kind people who handed them down to us), and so forth.

But when I hang the clothes up on the clothesline I get to think about those things longer. 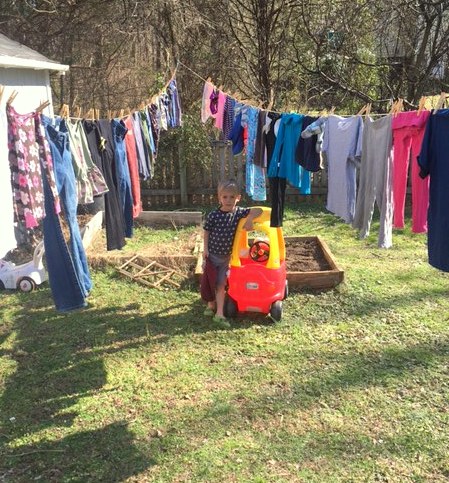 They're like a family flag, our little ensign to the world, declaring that this home is overrun with little people, overflowing with craziness, oversaturated with love, overwhelmed with blessings. Our cup truly runneth over.

"You must have done something," I said. "There is moss all over the place. It doesn't even make sense. Did you fill your pockets with moss or something?"

He assured me that he had not. And yet...there was moss all over the place.

Now, I like moss. I think it's beautiful: it's green and fuzzy and cute. Earlier this week (back when it was warm like today; not like Thursday or Friday...brrr) we went to the park and Benjamin found some moss and ripped it out of its home to bring it to me to admire—because he knows I like moss.

Of course I told him that we should put it back where it was growing (by the stream) because moss likes to grow in wet, shadowy places (not in the bright sunshine-filled, sterile-plastic playground).

So you see, it's not like my accusations were entirely unwarranted.

But then I came across this pair of pants and had to apologize to the poor boy. These pants are Rachel's pants and her pockets were filled with moss (a "moss ball," she informed me, which she was holding for Zoë). 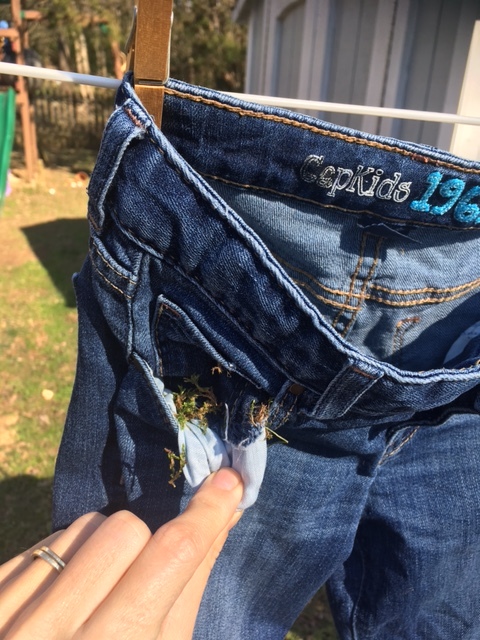 So that's why we had moss all over our laundry today.

My friend's mom told me that once her brother left live frogs in his pockets and his mom put them through the wringer washer machine—she spent quite some time scraping frog guts out of his pockets with a butter knife.

Finding moss is much better than finding squished frog guts, I think.

Eventually, Benjamin's carpool arrived to take him to a friend's birthday party (it was super hero themed and the mom had made little capes for all the kids; they were supposed to decorate them (she had all sorts of glitter pens and fabric markers and things) but Benjamin refused to because "super heroes aren't pretty") and Zoë and I settled down for a nap together (it's the only way she naps).

Meanwhile, back at campus, the girls were having a wonderful time reading, watching shows on their iDevices, consuming contraband like Diet Pepsi (vile liquid). Eventually the diuretic properties of her Pepsi-cola beverage prompted Miriam to visit the restroom. Ordinarily such a trip would have been run-of-the-mill, since the restrooms are right around the corner from Andrew's office. However, today is Saturday and on Saturday doors that are ordinarily left open and unlocked around campus are sometimes instead, by default, closed and locked.

Not knowing this, Miriam left through a door that was locked on the other side and allowed it to close behind her. When she returned to the door and tried to open it but, of course, wasn't able to since, from that side, it was locked. She yelled. She screamed. She pounded on the door.

Finally, she calmed herself down and said a little prayer.

Seconds later, Andrew came to investigate what was taking her so long. He was quite surprised when he opened the door and found a beaming but blotchy-faced Miriam, with tears still glistening in her eyes. "Heavenly Father really does answer my prayers!" she exclaimed.

The reunited trio soon left campus to pick up Benjamin (and his carpool buddies) from the party. We had a wonderful Daddy-cooked meal (which means it was delicious), cleaned up from dinner, showered, and left to go on a walk. We sent the kids outside without us for a few minutes while we finished up a few things and found them anxiously waiting at the door, their sweet little faces pressed up against the glass: 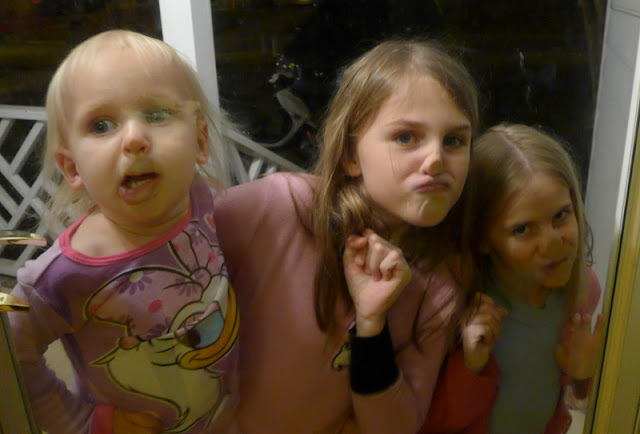 Such beauty. Much grace. Wow. 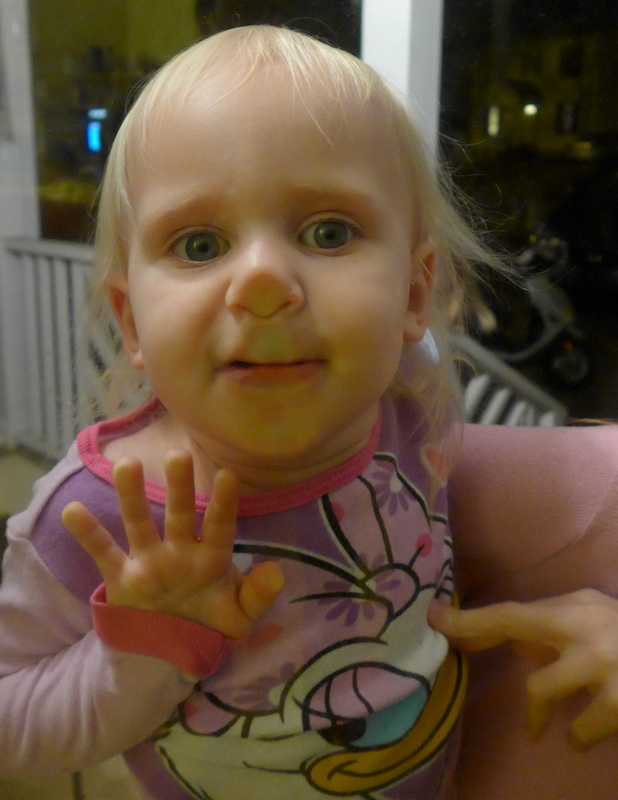 Before sending the kids to bed we played Quiddler, which we haven't played for years. The girls were quite good at it and our scores kept zig-zagging all over the place. As soon as someone bemoaned the fact that they were in last place they'd have an amazing round and pull to the front. Our ending scores were quite amazing:

I don't think we could have had a closer match if we'd tried.
Posted by Nancy at 10:19 PM