Last night there was a daddy-daughter dance at the elementary school. Evidently it was a lot more formal than I understood it to be and when my friends started putting up pictures of their daughters —dressed in beautiful, billowy gowns, hair carefully coiffed,  their dates dressed in stately suits, elaborately knotted neckties gracing their throats—I realized that I completely underestimated this dance.

We're in the south so I should have known: Southern Belles gonna belle.

We arrived home from ukulele practice at 5:30 and the kids rushed into the house with me barking at them to, "Eat a bowl of cereal! You have to leave in fifteen minutes! Go! Go! Go!"

Miriam made a bit of an effort to dress up. She put on a skirt and tights and sparkly shoes.

Rachel only agreed to go to the dance in the first place if she could wear pants. Fine.

I was actually surprised when Andrew changed out of jeans and a t-shirt and put on Sunday pants and a dress shirt. He looked nice.

I wanted to take a picture of the trio before they left for the dance, but we ran out of time. I was still scrambling to feed the little ones when they left. So while my friends have pictures like this: 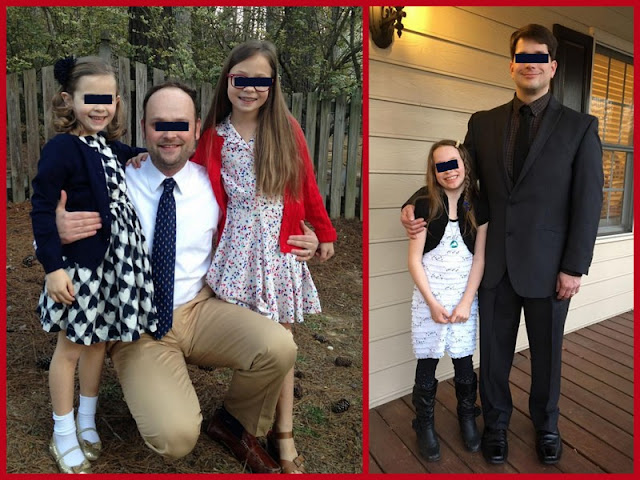 I have a picture like...this: 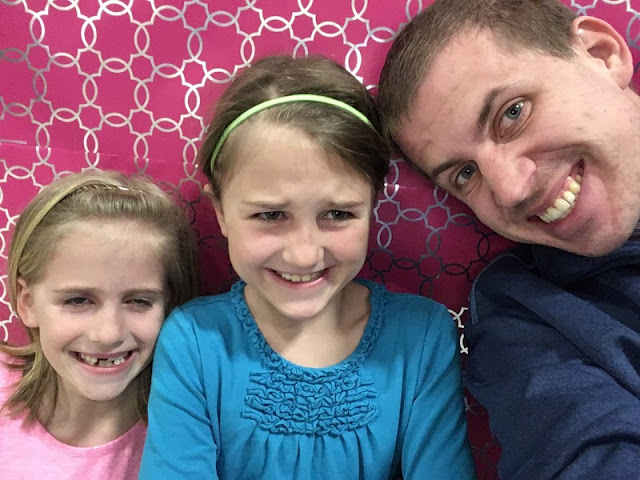 But that's alright because they had a fun time.

Andrew said as soon as they got to the dance the girls split to find their friends and left him standing all alone in the gym (rude). They eventually did return to him and they danced and played and had a great time.

Rachel's favourite parts of the evening were batting balloons around with her dad and plotting various ways to break into various teachers' classrooms while enjoying refreshments. 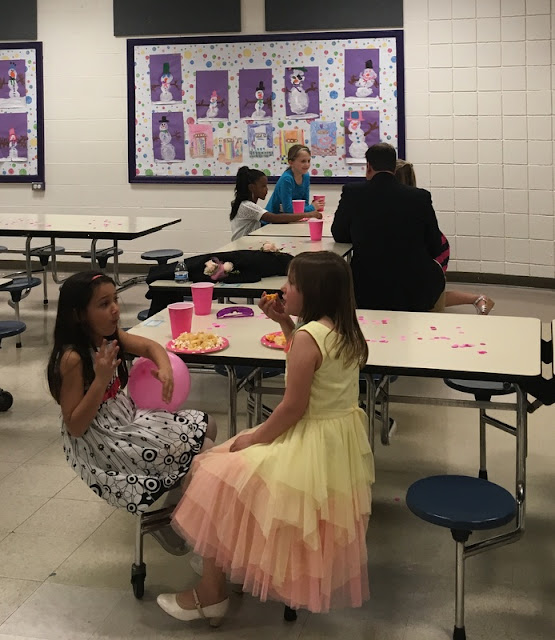 Miriam's favourite part of the evening was "the dancing."

Andrew's favourite part of the evening was probably coming home to work on his ISA paper. But I'm sure he had a fun time with the girls, too. They waltzed, they did the cha-cha...but it took them awhile to warm up to the idea of a dancing daddy.

"No way!" they kept telling him when he'd ask them to dance. "You dropped Mom, remember?!"

And that's true. But only one time. Other than that he's a fine dancer...

When they returned home the girls were both giggling and their cheeks were flushed with excitement/exertion, both good signs of having a good time.
Posted by Nancy at 11:39 AM