A funeral and some frisbee

My grandpa's oldest sister, Lois Layton Shay, passed away on August 14. Her funeral was this Saturday and my mom asked if anyone from our brood wanted to tag along with her. Since Rachel already had Saturday plans with Grandpa and I knew I didn't want to take Benjamin or Zoë, that left Miriam. She's never been to a funeral (within her recollection) so she was more than happy to accept the invitation.

I drove (yes, me) to Provo to meet up with my mom, who then drove us all into Salt Lake (because Salt Lake is definitely not within my driving bubble). We made it just in time to attend the family viewing before the funeral (Miriam was morbidly curious about seeing a dead body).

It was fun to hear about Lois's life during the funeral. I took a few notes, since she shares quite a bit of history with my Grandpa Layton (for example, I learned was that apparently my great-grandfather, Russell Layton, did the plaster for Lucille Ball's swimming pool). Unfortunately, the poor Layton children don't seem to have many childhood memories to share, their lives being so tragically altered at such a tender age.


On September 29, 1937, my great-grandmother, Erma Layton (age 33), was driving in Salt Lake with three of her children as passengers (Lois, age 9; and Wayne and Wanda, my grandpa and his twin, both 5 years old) when they were struck by another vehicle, driven by 21-year-old George Lingman (who I believe was driving drunk).

Lois was thrown to the floor of the vehicle but was mostly fine. My grandpa broke his arm. Wanda suffered the worst injuries—a broken collar bone and an arm and a few other bones, I believe. Their mother was thrown forty or fifty feet from the vehicle.

They all were taken to the hospital, where Erma and Wanda were admitted and Wayne and Lois's injuries—and tummies—were treated before being sent home. The treat they got was stewed tomatoes and ice cream.

Now, I thought that first they had stewed tomatoes and then they were given ice cream, but my mom told me that, no, they would have been served together. Her family used to have that for dessert (though she said she always refused it). That or simply stewed tomatoes with sugar sprinkled on top—because tomatoes are a fruit!

There are actually several recipes for tomato ice cream if you ever get the hankering. (Part of me is curious and part of me is repulsed so...I dunno).

Wanda recovered from her injuries but Erma succumbed to head trauma October 2, 1937. George Lingman was charged with involuntary manslaughter and reckless driving and was convicted but he appealed to the Supreme Court (of Utah, I assume) and it a retrial was ruled necessary. There were several mistrials and, frankly, I can't find the ultimate outcome for Mr. Lingman.

This is the memory the Layton children have of their childhood, however, at least of life with their mother. They created new memories later, of course, after the accident, but this was certainly a defining moment in their lives.

Anyway, Russell Layton eventually married a widow, Cleone Shay, who had three children. They became the Layton-Shay family (and that's what we called reunions on that side of the family whenever we had them) and later had another daughter together (Colleen), making them a family of ten (yes, ten...I think I failed to even mention Lloyd, who wasn't in the vehicle at the time of the crash).

Now, Cleone had a brother-in-law, William Shay (the brother of her late husband, Frank), who came by to visit his nephews (Cleone's children). Doing so caused him to bump into Lois, their new step-sister. And the rest is history!

Lois and William were married (much to the chagrin of Cleone, who wasn't entirely happy about their union) and Lois became the aunt of her step-siblings.

Over the course of the next 18 years, they had twelve children (plus one miscarriage; I thought it was neat that she would include her miscarriage—something she seemed to recollect with sadness in spite of twelve living children (children are always important)), including two sets of twins.

That meant that for years she had three children in diapers—cloth diapers, which she washed in a ringer washer (in water she boiled on her wood-burning stove) and hung out to dry on the line. Her eldest was in diapers when along came twins. And then by the time she got the eldest out of diapers she had another baby in diapers to add to the twins. So years of three in diapers. Twice!

I'll just have to remember that when I think my plate is full. That, along with attempting to potty train in an outhouse.

Lois learned to drive at age 23...when it became too much to drag her five children into town on the bus.

One of her children, Patrick, often got bloody noses as a child (my mom snickered that it must be something to do with the name because her Patrick often got bloody noses as a child as well (she also was laughing about choosing the name Patrick and the name Nancy (because Lois has a Patrick and a Nancy))) and one of his fondest memories was when his parents decided to take him to the hospital after not being able to stop his nosebleed for hours.

It ended up stopping on their own, but he still got to spend some quality time with his parents alone (which is quite the luxury with a family that large). They stopped at the river to clean him up and even got him a treat (a "bubble up," whatever that is (spoiler: probably a soda pop)). And then his dad let him and his mom out to walk the rest of the way home together while he drove the car to the garage. How's that for a fond memory?!

It was fun to hear all those stories.

Miriam wanted to go to the burial but instead we went out to lunch at Kneader's, where Miriam got a kid's meal and a peach tart. She felt rather spoiled, indeed, and I joked with her about her day being a bit better than having to get an unstoppable bloody nose for some one-on-one time.

After lunch we headed out to see Uncle Patrick play in his ultimate frisbee tournament, which was fun (and hot and sweaty). 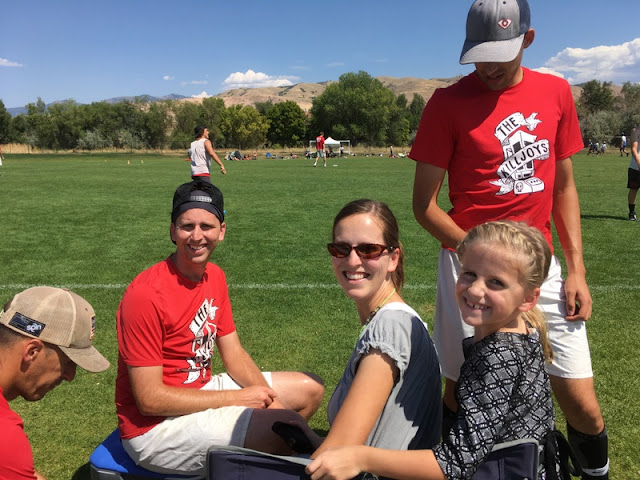 And then we had to stop at Uncle Bruce and Aunt Sara's to use their toilet before we headed home (because the line of porta-potties just wasn't very alluring to 30-week-pregnant me and I'm spoiled).

It made for a very long day, but Miriam was happy to come home to share her adventures with her siblings, who in turn were happy to tell about the adventures they'd had.
Posted by Nancy at 12:07 AM