Millions of peaches, [but no] peaches for me!

Zoë escaped family scripture study last night and found Grandpa, who took her outside to check on the peach tree. Soon they came back inside and Grandpa announced that we had "a tree emergency" which required all hands on deck. It was rather windy so we all figured a branch had broken or something but instead we found the poor peach tree, so overladen with fruit that its boughs were drooping to the ground. Though not broken yet they soon would be if we didn't act quickly, and so we had our first peach harvest!

The kids were rather excited about this; they've been anxiously waiting for fresh peaches and we've been sharing the few that have ripened before the rest of the crop.

On Friday when Aunt Stacey stopped by and we were showing her the tree Benjamin grabbed a peach and said, "Can I pick this one?" and accidentally ripped it off the branch.

Benjamin tried to put it back on, to no avail.

But last night we were picking peaches whether sun-ripened or not (mostly not). Reid and Karen were surprised by how quickly the peaches seemed to have swollen and by just how many there were (because they'd already done quite a bit of thinning earlier in the season). 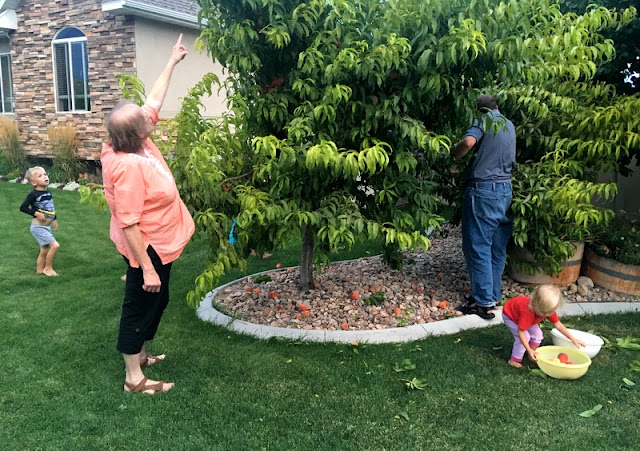 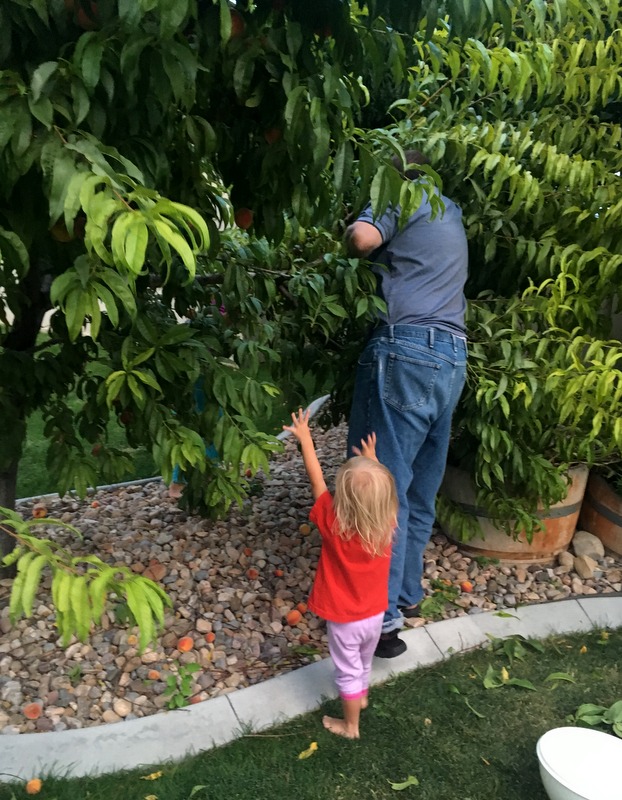 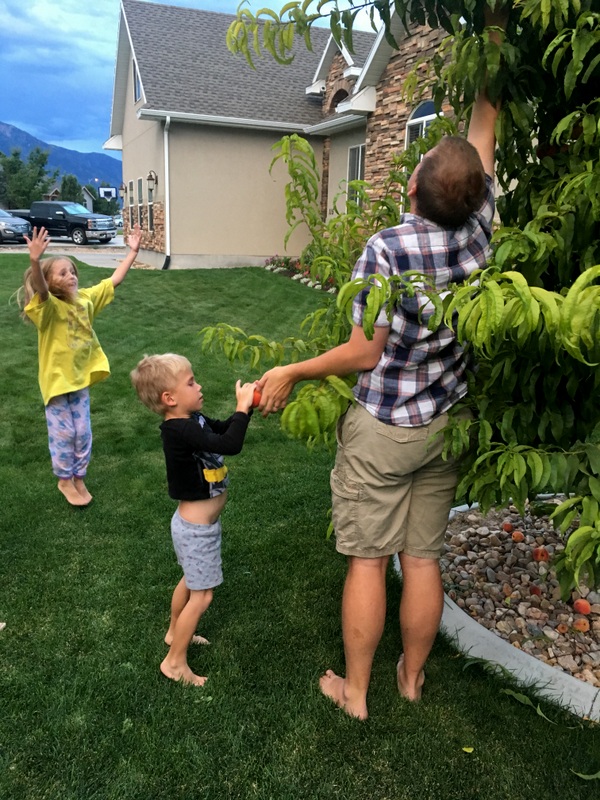 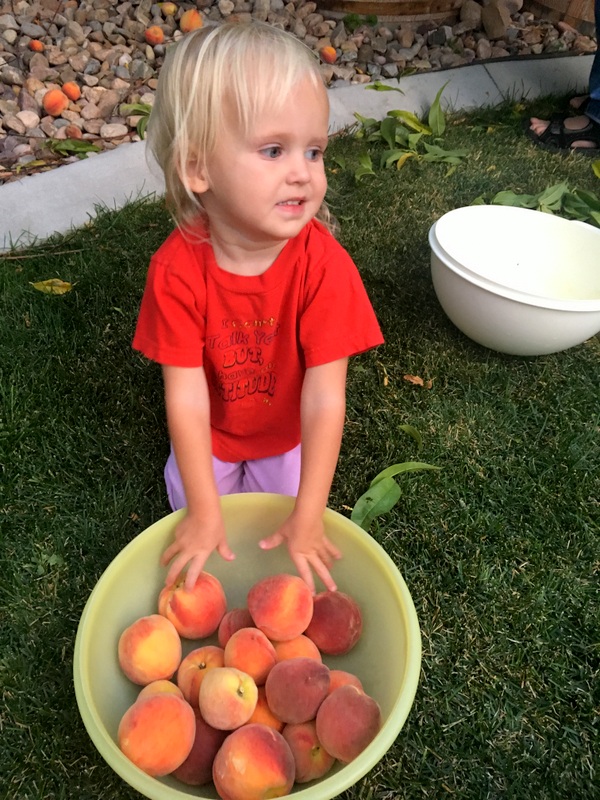 It was quite the haul, as you can see: 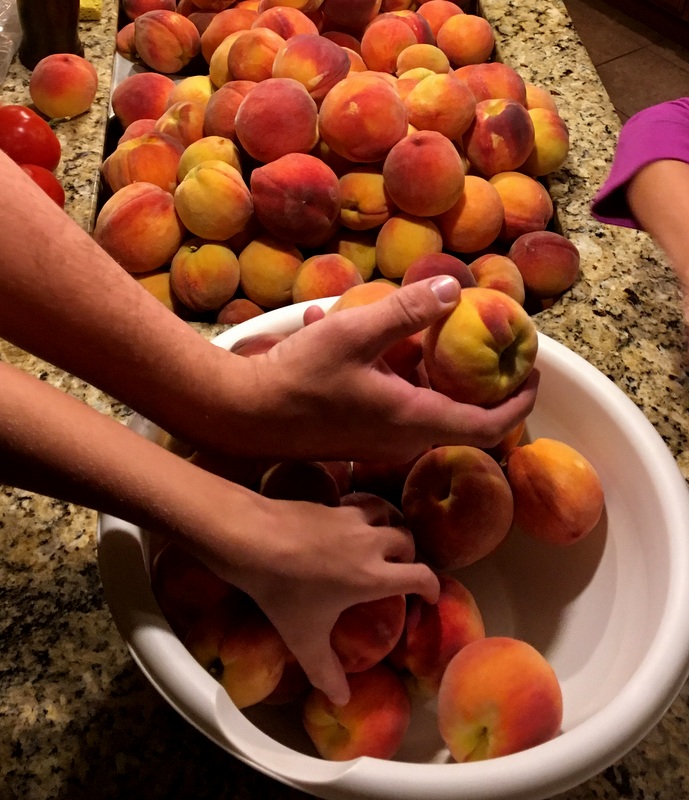 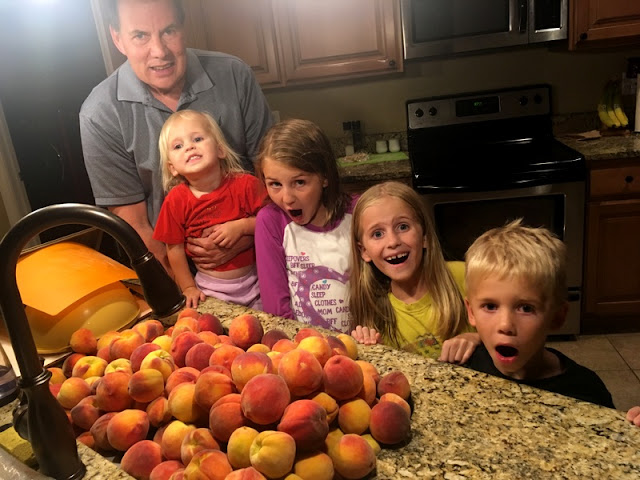 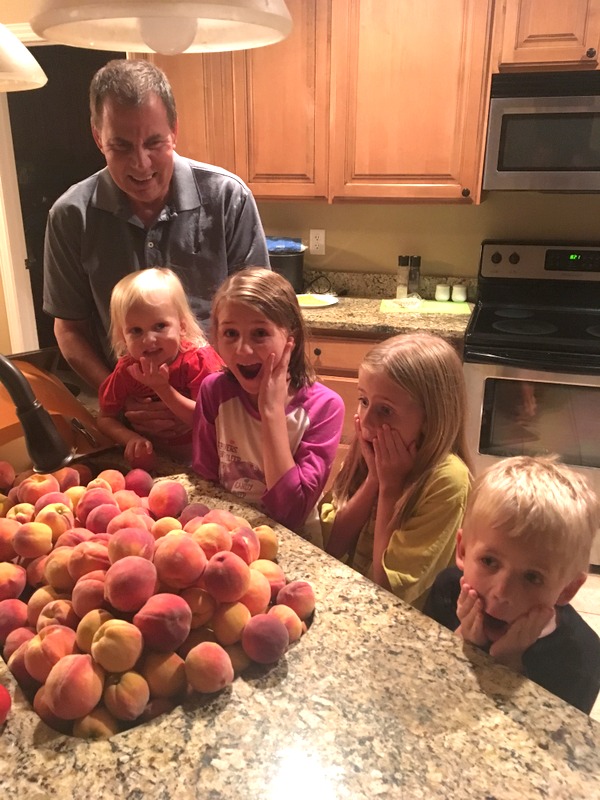 While I was otherwise employed in the kitchen last night (finally getting around to making a birthday cake for Rachel, our poor, neglected 10-year-old), Reid, Karen, and Auntie Emily (who is down from Idaho for the weekend) processed a bunch of peaches so we could make some peach leather. (Andrew spent his time organizing the upstairs and did a phenomenal job (I may or may not have had a little break down because I was tired of the constant mess but too tired to fix it (so tired of bending over and standing up, and running up and down the stairs; everyone keeps saying how small I am but I am in the third trimester so I'll let you take a guess on how comfortable I'm feeling presently (and it's not like my babies are small either—they're good-sized, average—they just...hide...somehow)))).

Currently both Karen's dehydrator and my dehydrator are working at full capacity in the garage (eleven trays of peach leather coming up), there is a bowl of ripe-enough-to-eat peaches sitting on the counter and there are four paper grocery bags of peaches yet-to-ripen.

And the tree is still full.

And this is just the "early" peach tree (we have a "late" peach tree, too).

So right now I'm basically cursing my gestational diabetes because I love a good peach. Unfortunately I can only eat a slice or two at a time right now because fruit makes my blood sugar soar. *shakes fist*

Fortunately, neighbours have noticed that we haven't had time to plant a garden "yet," having just moved in and all so they've been more than generous with their zucchini and yellow squash, which no one will eat but me. So...yay...

Because who would want a peach when you have fresh zucchini?

We're planning on freezing some and, if we get brave and ambitious, canning some so I won't miss out entirely, but still.
Posted by Nancy at 1:30 PM