With Benjamin's free days at home ticking away, we decided to treat ourselves to an adventure today. It felt a little funny to be doing an adventure—just the three of us—while Rachel and Miriam are at school. Zoë keeps asking about where they are and when they'll be coming back. Benjamin asked if I was sure we should do this without them. I assured him that I was positive.

It wasn't a grand adventure by any means, just a little jaunt to some green space by the train tracks to watch for trains. He's been hoping to watch one go by, but we haven't been lucky enough to catch one yet. Today was no different, which was kind of disappointing (but not really because Benjamin is too optimistic of a person to remain disappointed for long). We did see several small planes, had a picnic, tossed around some frisbees, and sat in the shade for some story time—all good things, all good things. 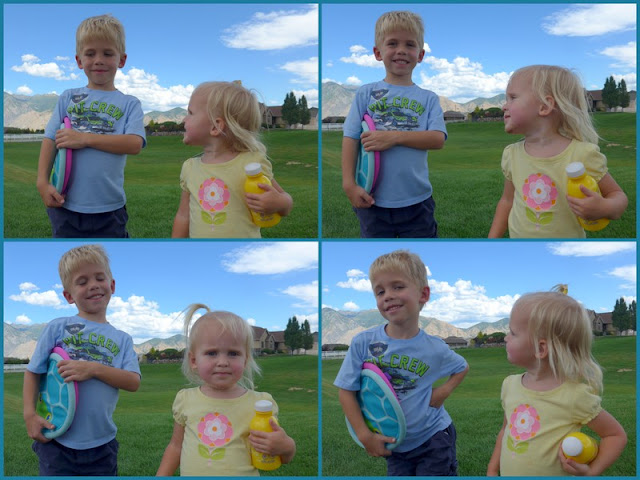 Okay, sometimes she'll say "Enji" or "Mem" if we really press her. Usually, however, she'll offer a mute stare-down or a loud, "No!"

Maybe she'll learn to ask for him when he's less of a constant fixture in her life. Maybe.

Later in the afternoon, when the girls finally made their way home, we went to the church parking lot to practice riding our bikes. We left Miriam's bike in North Carolina and brought Rachel's old bike for Miriam to grow into, knowing that the plan was to obtain a bigger bike for Rachel out here. Miriam was a little timid to get on such a tall bike (20" wheels) but after a few minutes she was zooming around the parking lot.

The girls are excited to ride their bikes to school together now. This morning they met up with some friends who were riding their bikes. Miriam was loaned a scooter but had a hard time keeping up with everyone on bikes. But she shouldn't have a problem now! 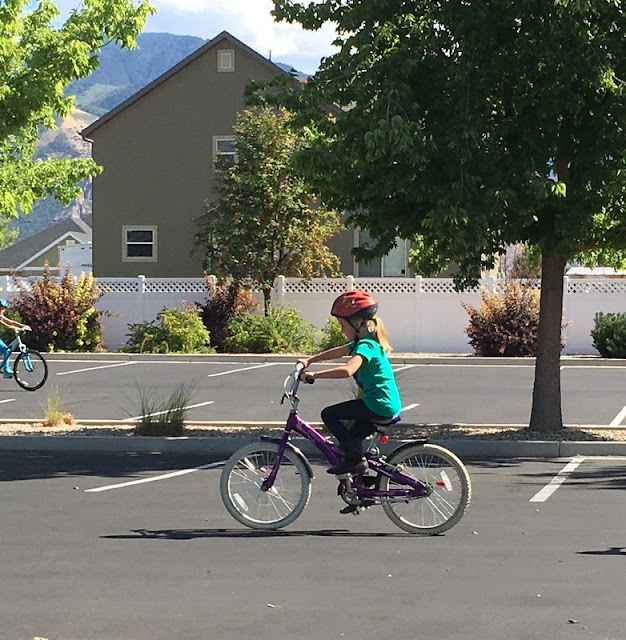 On the first day of school they walked home and the little ones and I went outside to wait for them since our road is a little busy and the girls aren't used to crossing it yet. I watched school kids pour down the street and enter various homes, but my girls were not among them. I waited and waited and waited for them to appear.

We had timed ourselves walking home from the school on Monday, going at Benjamin's dilly-dally speed, so I figured I'd give the girls that long to get home...but there was still no sight of them.

I waited five minutes beyond Benjamin's dilly-dally pace. There was still no sight of them.

I squinted and peered up the long sidewalk they should have been walking down by now. No one was there. Every single child had made it home but mine were still MIA.

I loaded Zoë into the stroller and she, Benjamin, and I struck out to locate their missing sisters. We soon found them, looking a little flushed in the face and quite out of breath from their long, brisk walk. They had disagreed about where they were supposed to cross the street after leaving the school and where they were supposed to turn and they ended up going the completely wrong direction. So they turned around but realized that they'd never recognize where to turn from the direction they were walking so they retraced their steps all the way back to the school and started home again, this time making all the right turns in all the right places (but putting them terribly behind schedule).

It was good for them to figure it out on their own, though. I'm sure they won't get lost coming home again. And now that they're on their bikes I can expect them home much sooner than if they were walking.
Posted by Nancy at 1:53 AM