Last night my mom treated Rachel, Miriam, and me (and my friend Marquita and her daughter Maya (since Josie and Rosie bailed on us)) to the theatre at BYU. We went to see Brigadoon, a show we're fairly unfamiliar with, because we knew so many people performing in it. The Thomas family, Uncle David's ex-girlfriend Jess, and one of my mom's students. It was fun to see them perform and the show was really well done—the singing was phenomenal!

It was originally on at the Scera Shell in Orem but Education Week sponsored the show to do a run at the De Jong Concert Hall, which is where we saw it.

I had seen the movie, featuring Gene Kelly, of Brigadoon years ago at the Torrie's house but aside from remembering the setting—a disappearing/reappearing village in Scotland—and the fact that it was a love story, the plot was basically a surprise for me. I was even quite surprised when they started singing, "Almost Like Being in Love" because I know that song! I had no idea it was from a musical, let alone this musical. It's such a familiar song to me that it almost broke the spell on stage for me, seeming to be out of place (even though it was exactly where it belonged).


After the performance we went out to wait to greet the performers but they never came out so my mom took us on a little tour through the back hallways of maze that is the HFAC to find the greenroom (which my mom is rather familiar with since that's where Gamelan rehearses) and there we were able to congratulate our friends on a job well done.

Here we are with (most) of the Thomas family (we're missing one of their daughters who was in the show as well, and a couple of their sons who were not in the show): 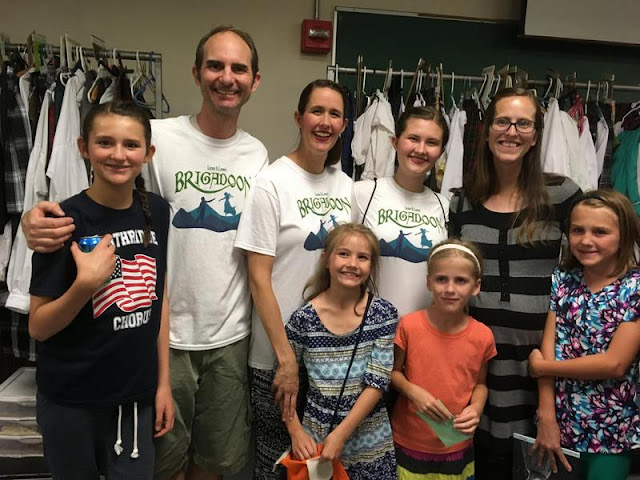 I'm standing beside my little Sunbeam, Mary Elizabeth, who is just getting ready to turn in her mission papers! If that doesn't make me feel old, I don't know what would! Noel, her mom, is my doppelgänger. I suppose we look fairly different here, but when she doesn't have stage make-up on and is wearing her glasses we look a lot more similar. People were always getting us confused in the ward when we both lived there (and in fact, we are distant cousins through Mary Elizabeth Holdaway, the namesake of the Mary Elizabeth beside me, so the fact that we look alike isn't too astounding).