IKEA and the BYU Creamery

This afternoon we made an IKEA run with the kids for the last few things we need to finally get this place organized (ha—what we actually need is a big dose of motivation for Mommy). They were all thoroughly impressed with the store and loved walking through all the show rooms. Everyone saw a lot of things that they wanted (naturally) but we managed to walk out (more or less) with the things we had intended to buy in the first place (maybe a couple more).

While Andrew was checking out I took all the kids to the restroom and when we caught up with him he invited Benjamin to ride on the shelves we got. Rachel had been carrying Zoë but when Zoë saw Benjamin climb up on the cart she yelled, "Hey! Dad! Wait, Dad! Wait! Me on! Me on, too!" So both the little ones rode to the parking lot on top of our purchases. 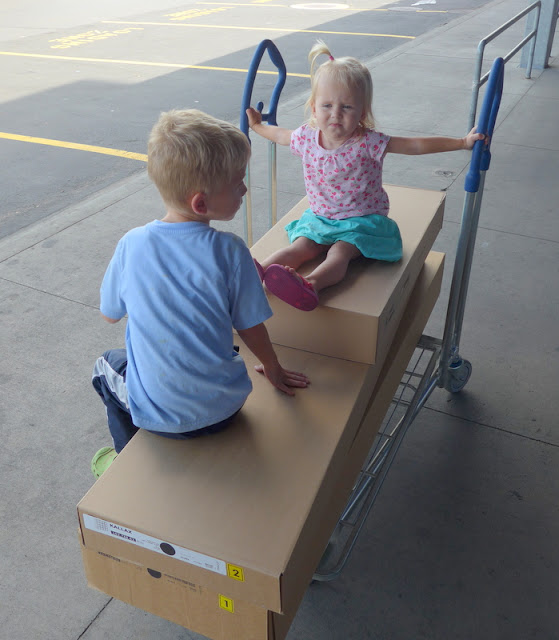 On the way home we stopped by BYU to see Daddy's new office. They had recently cleaned the carpets so they were still pretty damp. There were big fans set up everywhere to help dry them out. It was a little bit stinky but made the kids think of home. "Ahhh," Rachel sighed happily. "This feels like North Carolina!"

We're missing the humidity a little bit and have all been applying lotion and chapstick (and drinking water) like crazy. 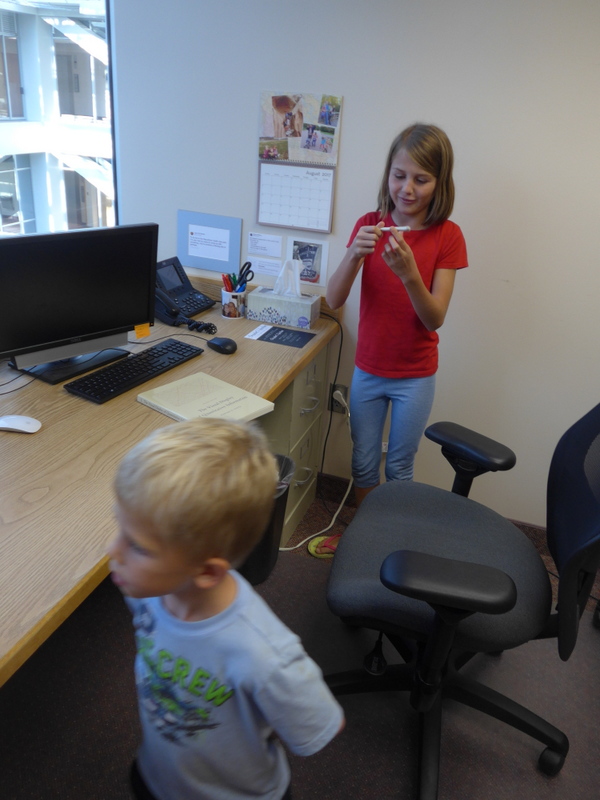 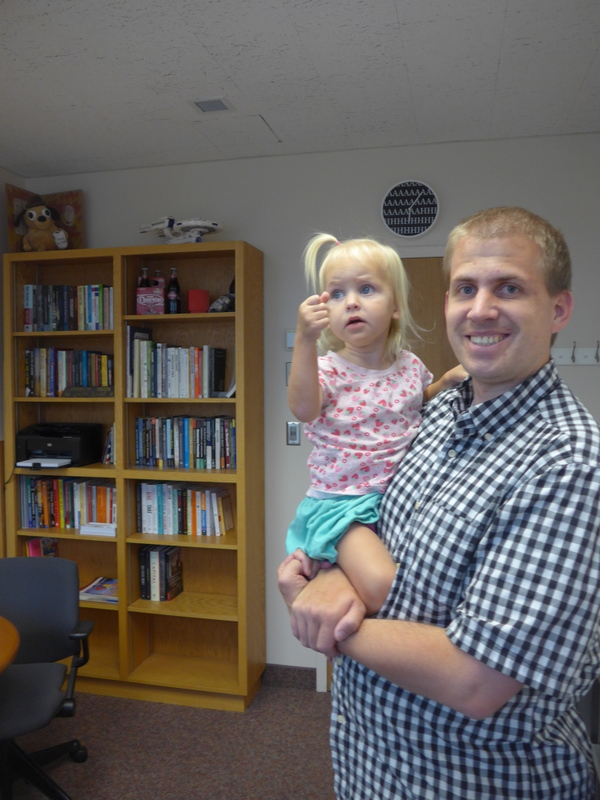 We had a quick dinner in the Cougareat (pronounced "cougar eat" for those not familiar with it), where Andrew and I had our first date after his mission (because we're fancy like that). Both the places we ate (some pizza place for him and Teriyaki Stix for me) have been replaced by other things (Papa John's (still pizza) and Aloha Plate, respectively) but it's still the good ol' Cougareat. Of course, it's summer semester so only two places were still open by the time we got there so our choices were quite limited but everyone managed to fill up just fine.

Here's our family in the courtyard between the HBLL and the Wilk: 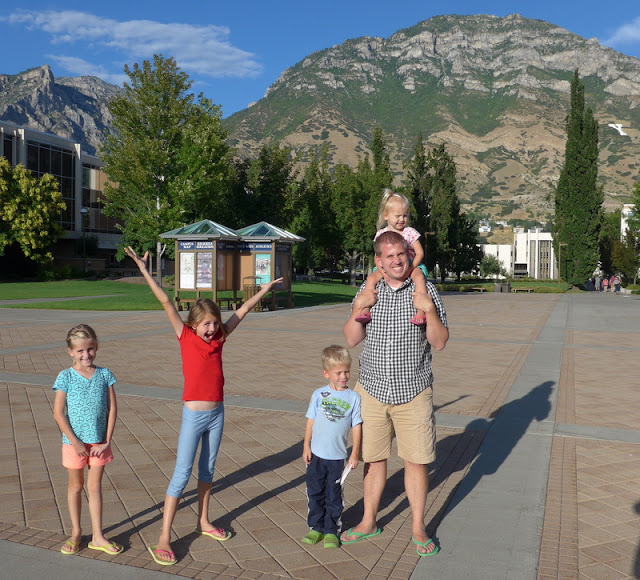 A girl saw me taking pictures and offered to take one of our whole family, so here's a rare glimpse of my 28-week belly: 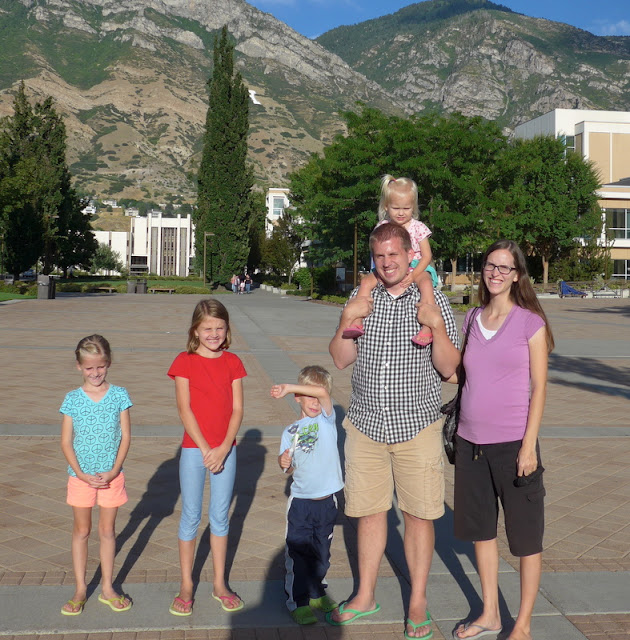 Zoë was feeling snuggly after dinner: 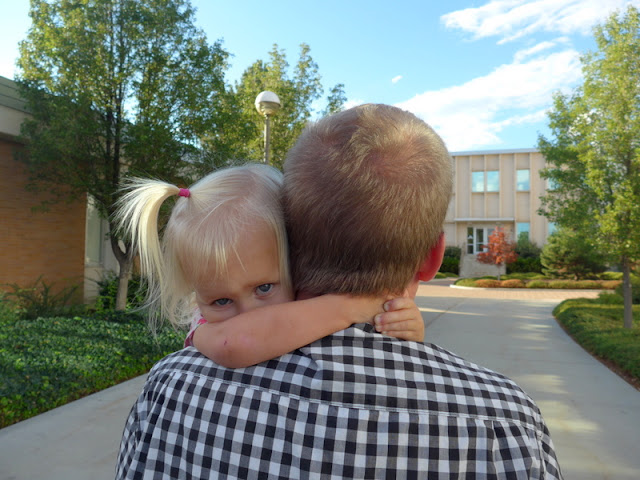 For dessert we headed over to the original BYU Creamery, which is infinitely less busy than the Creamery on Ninth (and infinitely more open than the creamery post in the Cougareat, which like nearly everything else closed long before we arrived).

The kids were excited to pick out their flavour, especially Zoë. While her taller, older siblings were peering through the glass and picking out which kind of ice cream they wanted, Zoë was jumping up and down and pointing at the picture of the ice cream cone on the glass (the only thing related to ice cream she was tall enough to see).

The girls behind the counter smiled at her, surely thinking how cute she was (because how could they not be?) when Zoë growled, "NUMMY!" the way that she does, which made everyone laugh.

So, everyone was excited to be handed their ice cream cone, but Zoë was ecstatic. 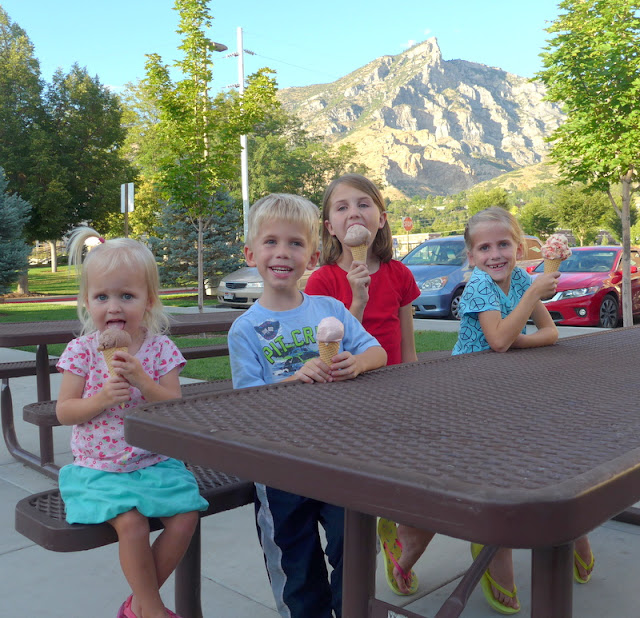 And just because I know you want to see a million pictures of my kids eating ice cream, here you go: 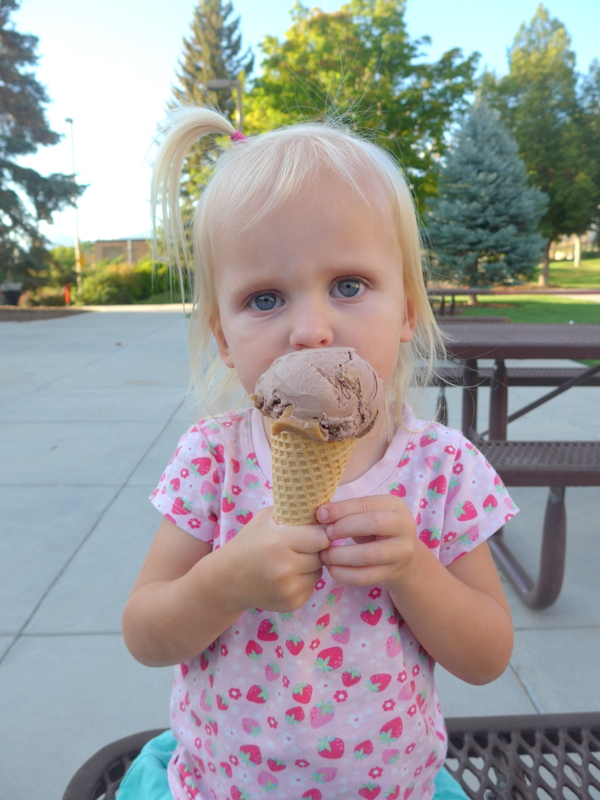 Benjamin has been an eating machine lately. He had three bratwursts with dinner last night and absolutely inhaled this ice cream cone: 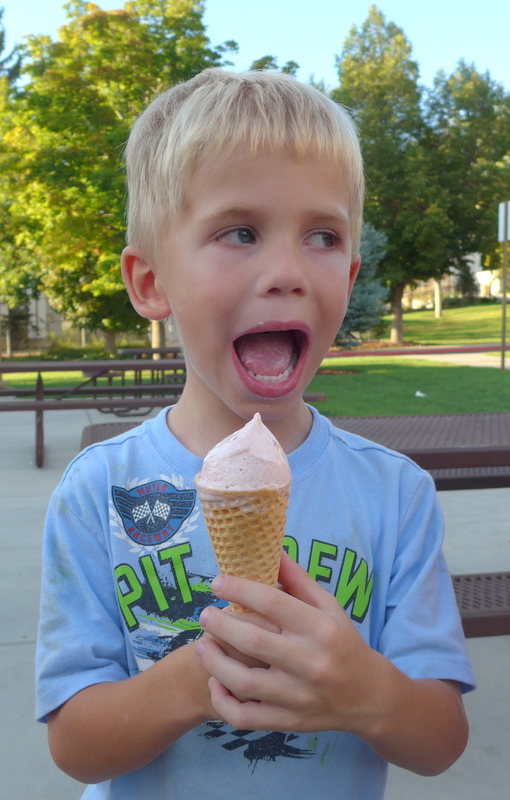 Miriam, on the other hand, ordered a single-scoop (she refused to be bunched with the children) and had a hard time finishing it. I think she and Benjamin should have switched cones because he seemed to still have some eating power left by the time he finished his child cone. 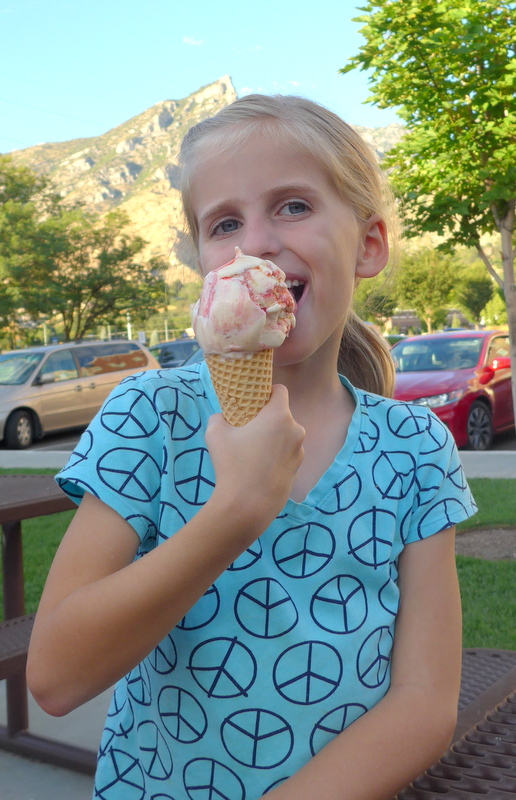 Here's Zoë looking a little messier, though she honestly did surprisingly well with her ice cream: 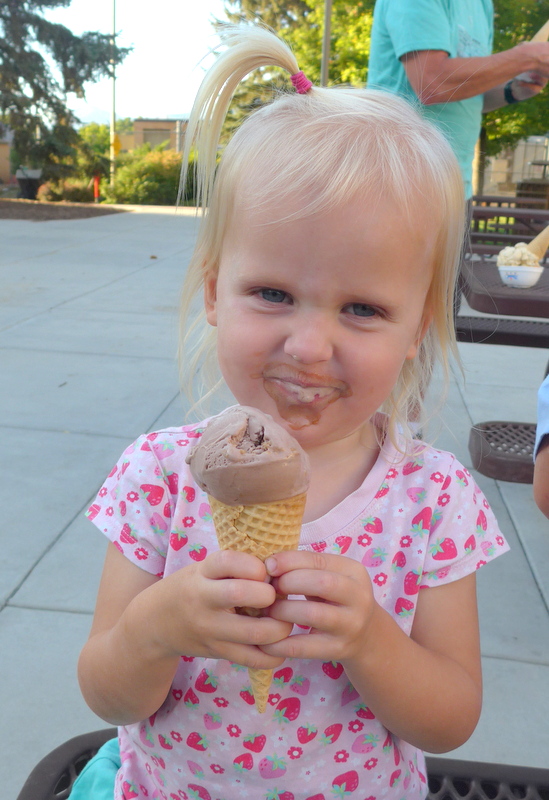 Andrew did do quite a bit of helping when things got too drippy and usually Zoë didn't mind the help but every now and then when Andrew took a noticeable amount off her cone she'd glare at him and scream, "HEY! MINE!" 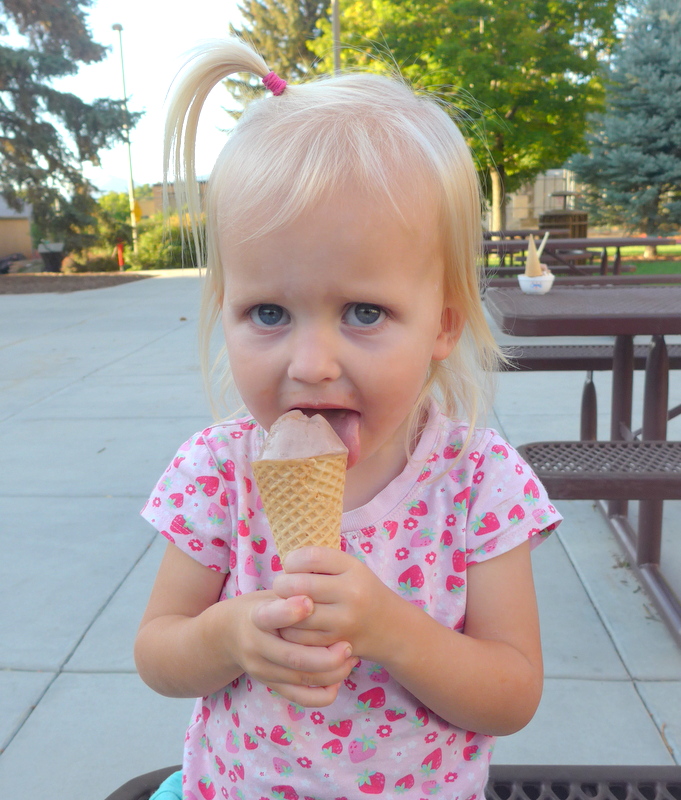 Rachel did fine with her single cone (and was begging licks off others at the end): 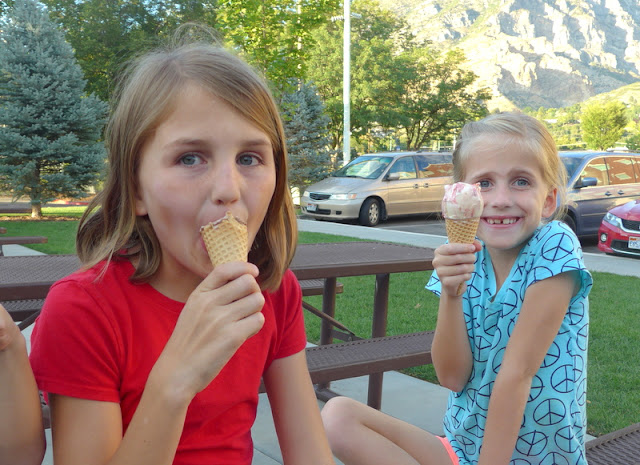 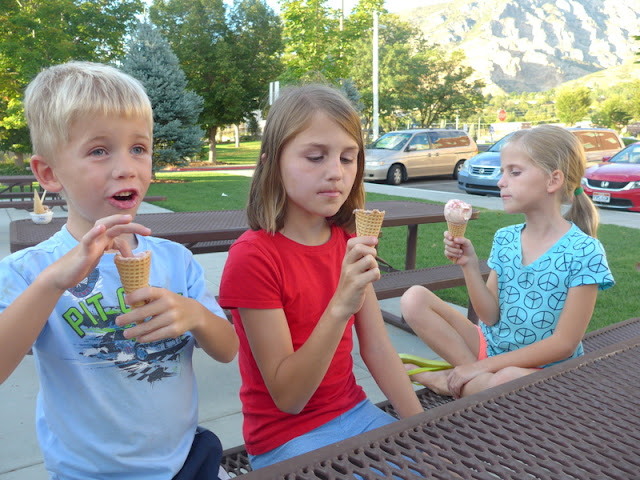 Here's Benjamin showing how far he licked down inside his cone (very impressive): 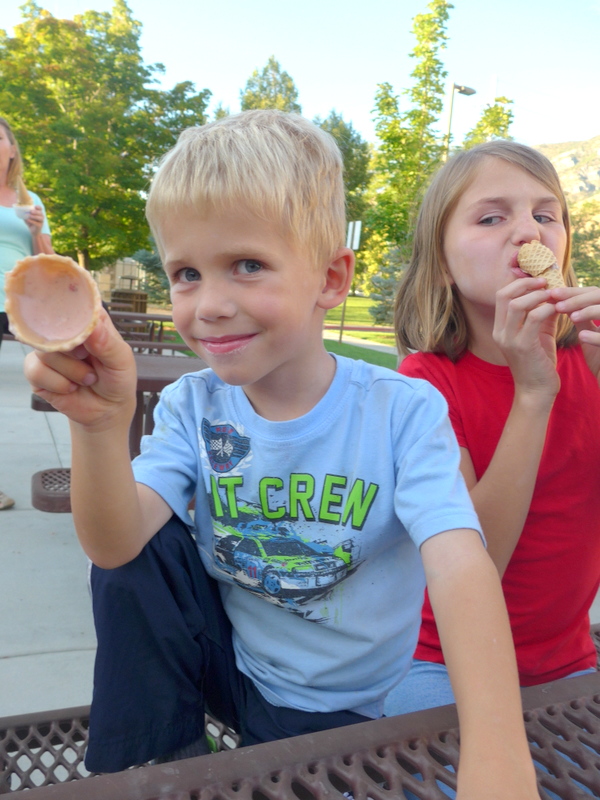 And here's a couple more pictures of Zoë before things started to get really messy: 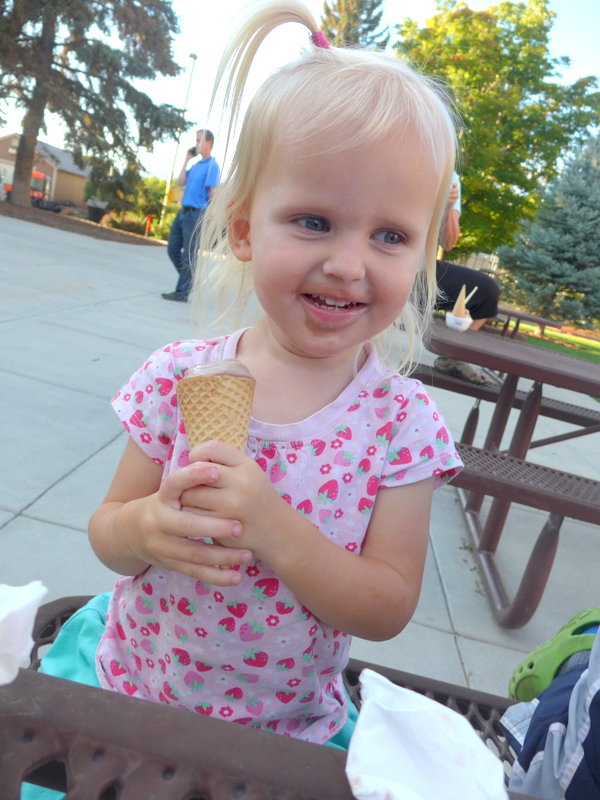 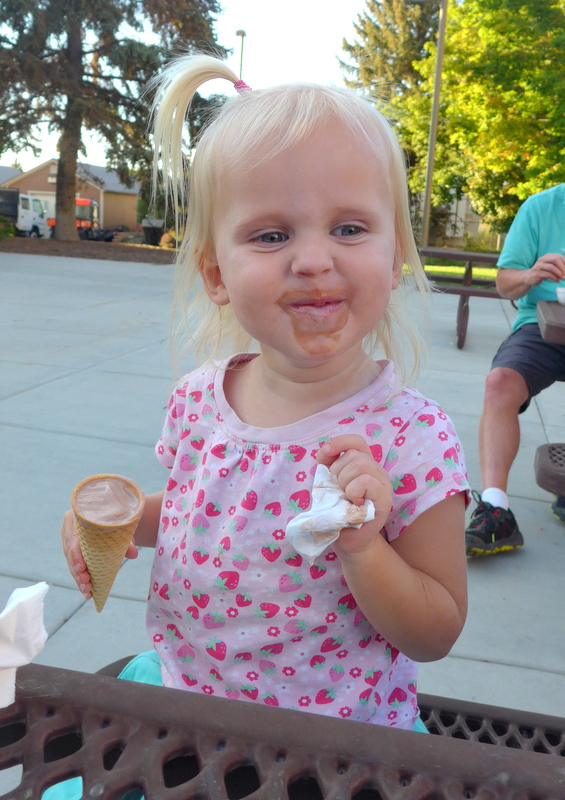 She did not want to bite her cone but she really needed to in order to reach the increasingly melty ice cream inside her cone, which had begun dripping everywhere. Eventually we convinced her that it wasn't a cone (because who would eat a cone?) but a cookie.

"Tall cookie!" she said, sounding at once impressed by the size of the "cookie" she was holding but also not entirely convinced that it was really a cookie. She took a leap of faith, though, and bit her cone and the rest is (a slightly messy) history.

I don't know why she was so averse to biting her cone because I'm sure she had an ice cream cone last week when Grandpa took the kids to the splash pad...but maybe she didn't quite get to the cone then. I don't know.

It was a good outing, though perhaps we should eventually plan an outing just for fun and not an outing built around an errand.
Posted by Nancy at 11:42 PM