The long-awaited day has come at last! Benjamin finally had his first day of kindergarten. Waiting for the day to come was particularly difficult this past week while his sisters were at school and he was staying home, pining for his classroom experience to begin.

He really did a pretty good job of getting up and getting ready, though I lost count of how many times I had to remind him to continue eating his breakfast.

"Keep eating. Chew. Take another bite. You need to put all that food in your belly, bud."

"No, you are staring off into space. Take another bite."

He can be a bit of a slow poke in the mornings and making him get dressed has been the bane of my life for the past several years. And that's why I'm glad he's in AM kindergarten—this way it only takes me an hour to get the kids ready and off to school rather than taking all stinking morning, as I'm sure it would if he were to be in a PM class.

Benjamin picked out his NASA shirt and a pair of plaid shorts that he was quite proud of (though his Daddy thought his outfit was a little bit goofy (it was the NASA shirt and crocs combination that really bothered him, I think, but I don't think Benjamin will give those up very easily—he has other shoes but he always wants to wear his crocs)). I think he looked very handsome.

He wanted his first-day-of-school pictures with the mountains behind him. 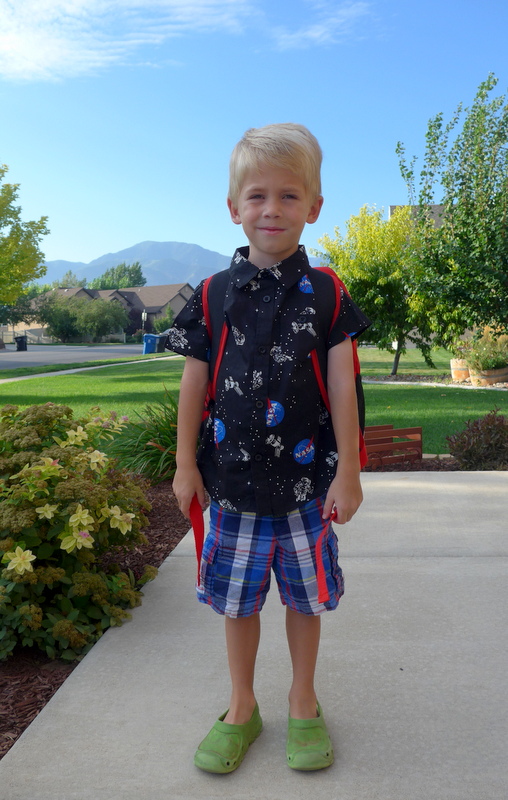 Here he is with his sisters: 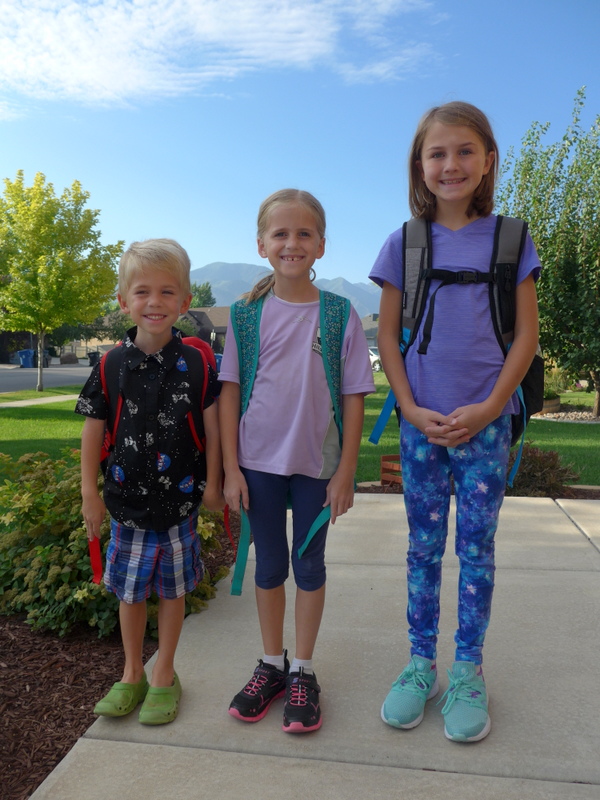 My brother pointed out that they're perfectly sized by age, just like my friends'—Geneen and Doug's—kids, except instead of grades 6, 4, and 1 my kids are grades 5, 3, and K. Geneen called hers stair-stepped kids.

He had quite the entourage escorting him to school: all three of his sisters, me, Grandma (because he insisted and because she'll need to know where pick-up/drop-off is so she's ready to help after the baby comes (and before, truthfully, because she's wonderful)), and Rachel's new friend Brynn.

This was my first time dropping a child off at school for kindergarten (or any first day). In the past I've just put them on the bus and crossed my fingers that everything would run smoothly. 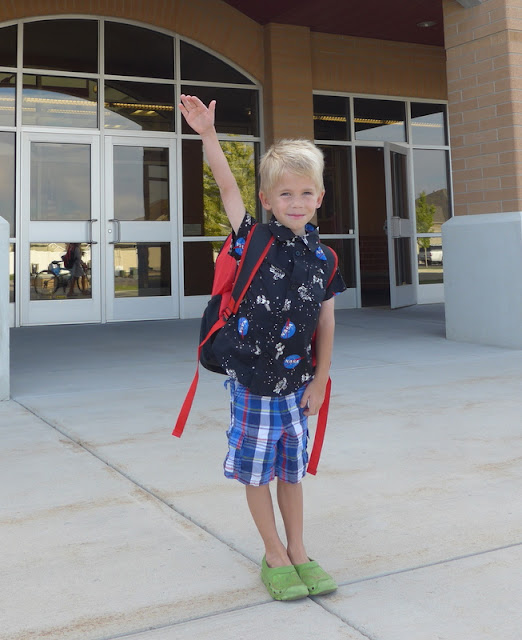 Everything always did, but it was still kind of nice to know with 100% certainty that my little boy found his classroom, put his backpack in his cubby, and was seated comfortably in his desk, ready to take on the world. 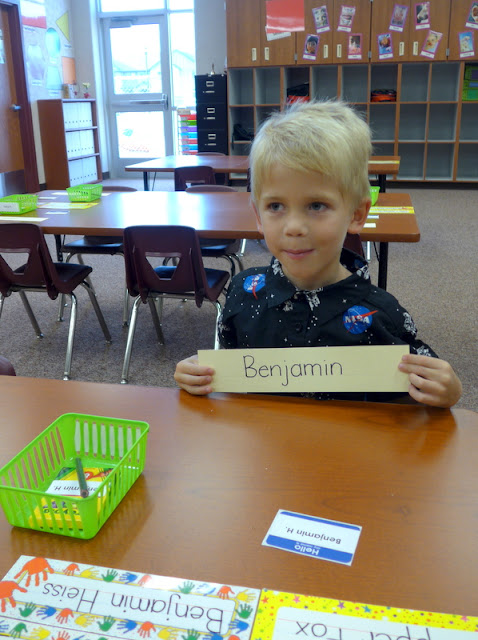 We weren't home very long before it was time to turn around and pick him up, but he sure seemed happy to see us—just Zoë and me this time.

I asked him about his day and got a few short answers from him (no, he didn't really learn much; yes, he met some new friends). His teacher had put a sticker on his shirt that said something like, "I had a great first day! I learned that I can read and I can write! Tell me about an experience you had in school."

I told him about how in kindergarten we had a rhyme for each letter and the rhyme for N was "Nancy newt needs naps," and how I didn't really like that in kindergarten because I did not need naps (but kids would tease me about it) but how now I really like napping. He thought that was funny.

I asked him if he had anything in his backpack to show me. He said he absolutely didn't, but that tomorrow he'd have a paper for me, telling me all the things he's supposed to learn this month.

"I think you're supposed to memorize our telephone number," I said. "I can help you learn my phone number."

"Well, my number is probably the best one for you to know..." I said.

"But it doesn't have to be your number. It could be Dad's or Grandma's or even Grandpa's!"

"Sure, but why don't we work on memorizing Mommy's phone number first? I can teach you a song to help you," I said, and started singing the Safety Kids telephone number song:

Or something like that. It's a catchy song. Promise. Even though Benjamin didn't think so.

"Mom, just...stop. You're giving me a headache. I'd rather memorize Grandpa's number," he said.

So, we got home and he burst through the door, ripped his backpack off his back, hastily unzipped it, produced a little book he'd made ("I can write! I can draw! I can read!") and ran off yelling, "Grandma, Grandma! Look what I made at school today!"

I guess by the time I asked if he had anything to show me he'd already decided he was going to show his book to Grandma, similar to how he'd already made up his mind that my phone number is not the number he wants to memorize (Andrew said we should just have him memorize my number and tell him that it's Grandpa's, which almost feels like lying but, like, I'm pretty sure Grandpa would prefer it if Benjamin were to be handing out my number to set up play dates with his little buddies instead of his (but I've been known to be wrong before)).

We had lunch together and then my mom and dad stopped by for a visit. My mom is on her way to New Zealand right now for a conference and wanted to be sure to see Benjamin and Zoë before she left (since she already hung out with Rachel and Miriam and me on Friday night and has seen Andrew on campus for orientation stuff frequently). We did puzzles, played some games, and built with LEGO. Then my parents left and we had reading lessons and story time before I put on a show (about the alphabet) and snuck off for a nap (because I need those) before we went out to meet Rachel and Miriam after school.

So I think it was a pretty good first day of kindergarten for him. His teacher said he had a good day.

My day felt terribly exhausting but I'm pregnant (and am still battling this sinus infection thing), so I'm not sure my opinion of the day can be trusted completely. Fortunately, Grandma had my back this afternoon and made pancakes for dinner and fed my kids and put a show on for them while I had a second nap (I told you she's wonderful (and I thought I was feeling better but evidently I did a little backsliding this afternoon and started feeling worse again)).

I'm sure we'll fall into a kindergarten groove soon!
Posted by Nancy at 1:17 AM