First day of school for the big girls

We took the kids back-to-school shopping (which is getting mighty pricey with three kids going back to school—new shoes for everyone!) last week but we still hadn't had their back-to-school day yet and had no supply lists for the teachers.

Our back-to-school day was yesterday and I was a little worried about squeezing in a run to the store for school supplies on the eve before the first day of school, but—you guys!—we've stumbled upon one of those mythical schools that provides supplies for the students!

When we walked into Rachel's classroom, every desk had a stack of notebooks and workbooks, a pencil case full of pens, pencils, and erasers, everything they'd need was right there. It was like Christmas! Miriam's classroom was much the same, except that her supplies were already inside her desk, labeled and everything. All of Benjamin's supplies were tucked into his classroom cubby.

All we had to do was pull off a "wish star" or two to fulfill for the teacher—things like ziplock bags and pencils and snacks and cleaning wipes (things that were also on our lists at Easley).

The girls thought it was weird to only be loading their lunch boxes into their backpacks this morning because (a) they're used to being so laden with supplies they're almost falling over on the first day of school and (b) this is the first year we've really packed lunches.

They were both up and dressed before either Andrew or I got up. They practiced the piano, helped unload the dishwasher, had some reading time, and were chomping at the bit to get out the door well before it was time to go. 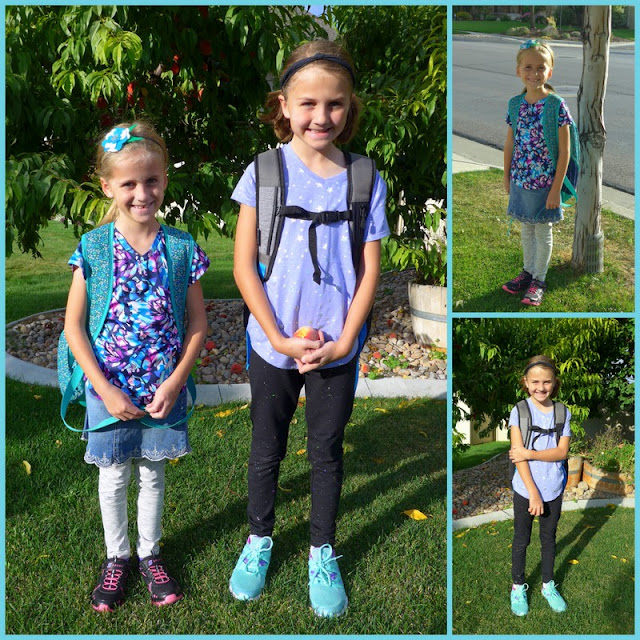 Benjamin and Zoë were still—miraculously—sawing logs in their own beds. They were so wound up from all of yesterday's excitement (the eclipse, back-to-school day, and so forth) that they were crazy by bedtime. I almost hated to wake them but...we've got to get used to getting up and ready for the day (something that will be a real challenge for Benjamin who loves to lounge in his pyjamas).

But we managed to get the two of them up and out the door in time to escort their sisters to school. We weren't sure how many kids would be walking (fewer than we'd thought, truthfully) or how difficult it would be for them to cross the one main road they needed to cross (we'll probably help them do that for a while) so we didn't want to send them off all alone, but we went our separate ways at the park—Rachel and Miriam headed off to school (ten minutes early, go our team!) and Benjamin, Zoë and I headed to the playground.

And here's Miriam, our new (I can't believe it) third grader:

Now I have one more week left at home with these two munchkins before Benjamin begins kindergarten: 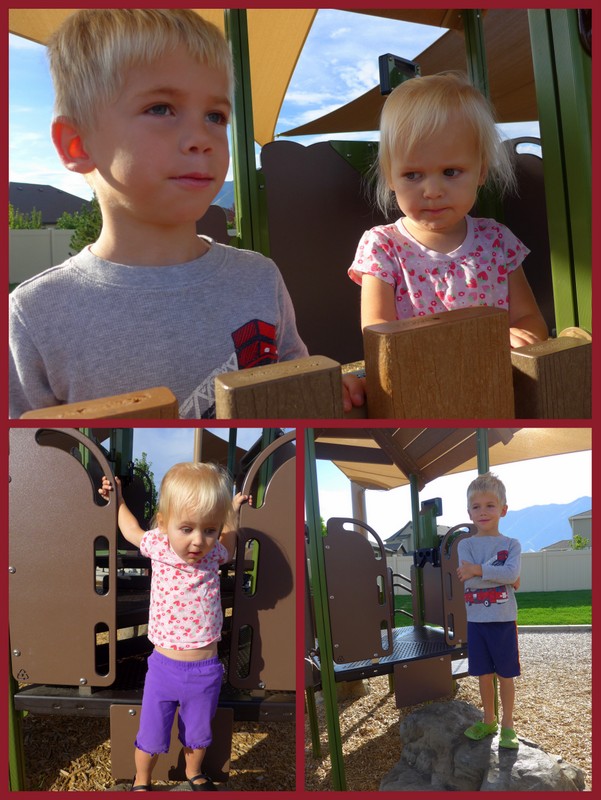 Kindergarten is only 2.5 hours per day (which hardly seems like anything after sending the big girls off to full-day kindergarten), but I think it will be good for Benjamin to have an incremental transition to full-time school. Let's just say that sitting still and being quiet for hours on end (or even minutes (seconds?)) is not his forte.

It will also be nice to have some one-on-one time (what is that?) with Zoë for a couple of months (or at least a goodly number of weeks) before the new baby arrives.

Considering we've been on a year-round schedule for the past four years, and had we stayed in North Carolina they would have gone back to school five weeks ago, this summer was starting to seem mighty long. We're excited to see what adventures this new school year holds!
Posted by Nancy at 12:37 PM