This was our second solar eclipse viewing as a family. The first was on May 20, 2012 in Grover, Utah. That was an annular eclipse, which is when "when the Moon's apparent diameter is smaller than the Sun's, blocking most of the Sun's light and causing the Sun to look like an annulus (ring)."

Andrew and I also watched (some of) the transit of Venus a couple of days after Benjamin was born. We were walking around the hospital (UVRMC, up on the third floor) and stumbled across a man using a welding mask to watch the eclipse and he said, "You have to see this!" so we stopped to take a little peek.*

There wasn't all the hubbub about fake glasses and/or going blind, like there was this time around. We ordered a couple of different varieties of glasses from Amazon. One of them was later "recalled" because they couldn't produce the proper paperwork for Amazon, but the other glasses checked out and were from an official vendor so we were well-supplied. And thank goodness! People were buying flimsy cardboard glasses for upwards of $15.00 (I know this because that was the price a friend found them for a couple of days before the eclipse; she bought 25 pairs (the minimum order) and was able to sell every pair she didn't need)!

100% would have been cooler, but it looks like we'll have another shot at that in six years or so.

Anyway, our partial eclipse was pretty neat! We could see it from our front yard just fine but Andrew insisted it would be cooler at the park, so we walked down there.

I attached the glasses to paper plates for the little kids and let them decorate them (and then made another one for Miriam, who decided she wanted one when she saw them drawing on the plates). Benjamin decided his looked like a superhero mask and dug out the "special occasion" cape (which he got at Drew's birthday this past year). He almost forgot it when we were leaving the house but we had him run up to grab it because if you're going to pretend to be Eclipse Boy, you may as well do it right! 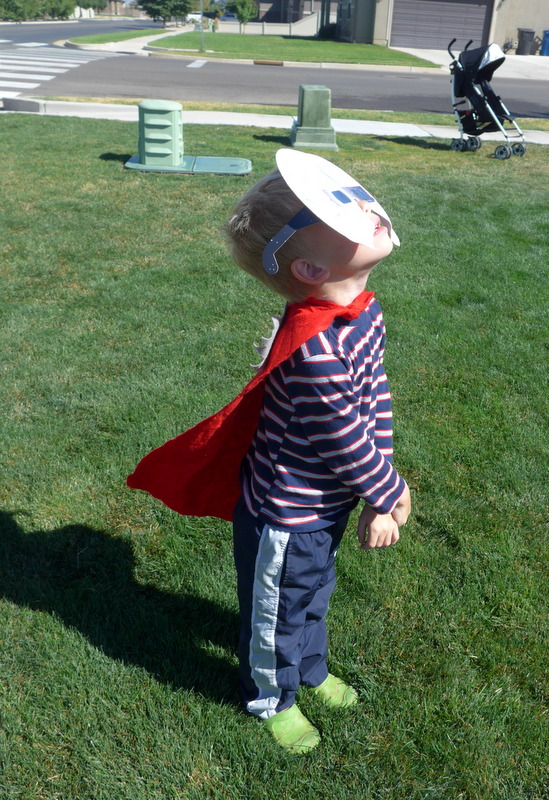 We took several pictures of everyone viewing the eclipse. Andrew said the eclipse was at once fascinating and acutely underwhelming (especially given how much hype it got). Perhaps the only thing more underwhelming than watching a partial solar eclipse is looking at pictures of people watching an eclipse. But here you go, anyway... 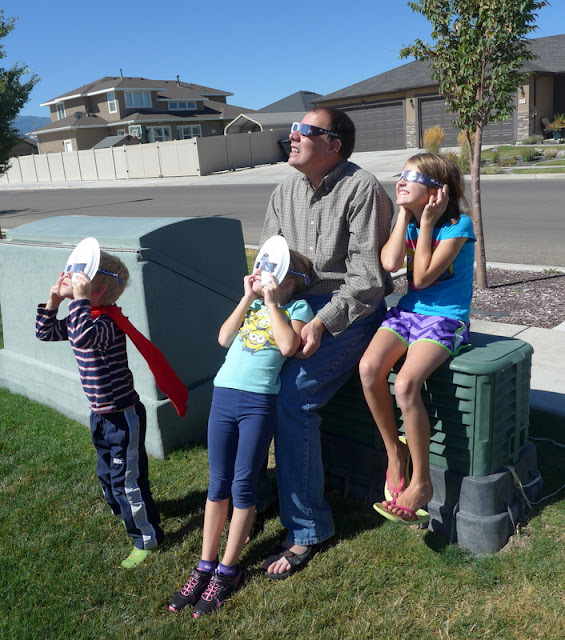 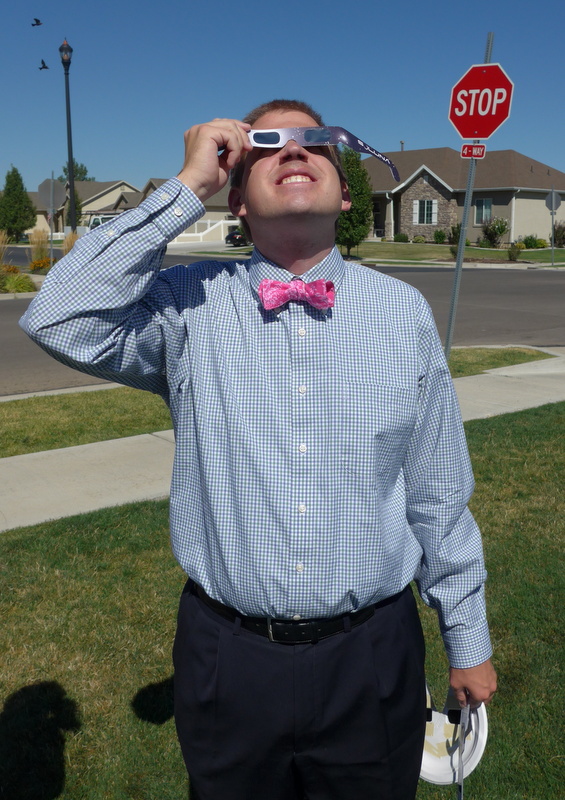 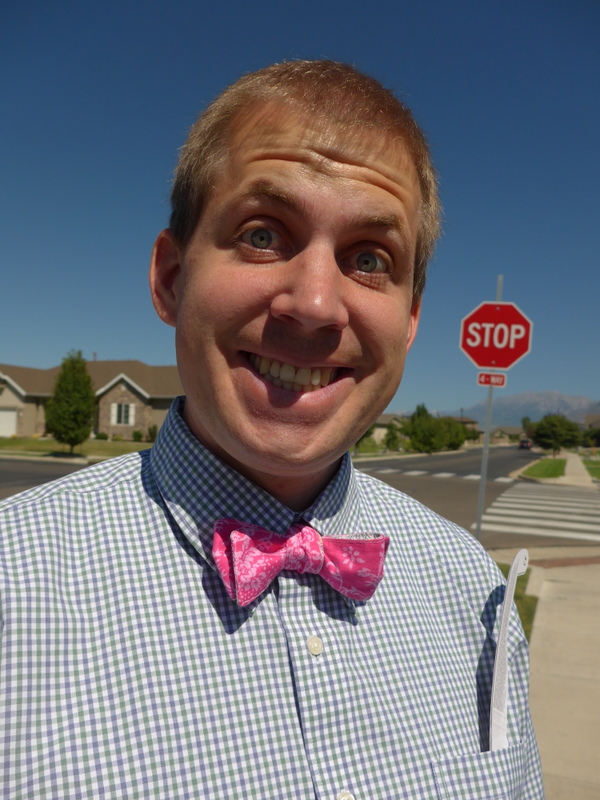 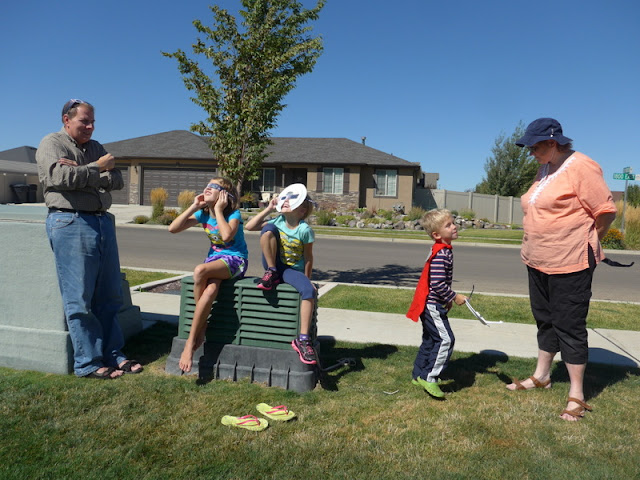 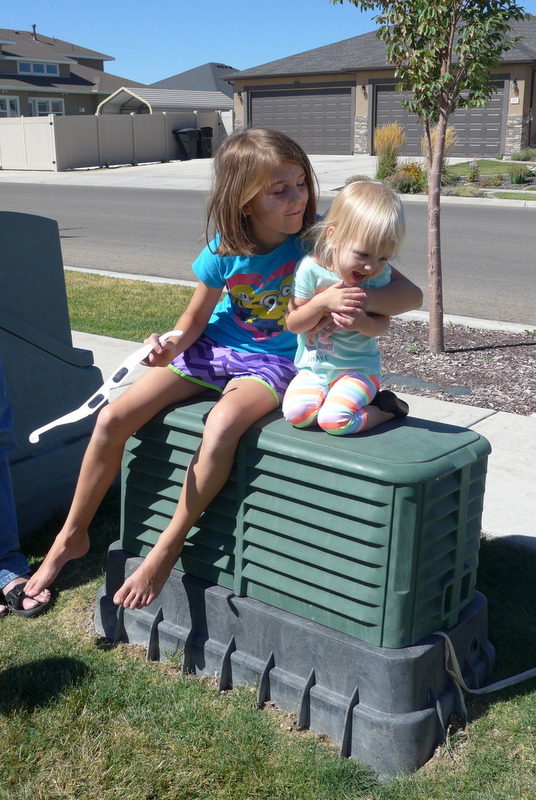 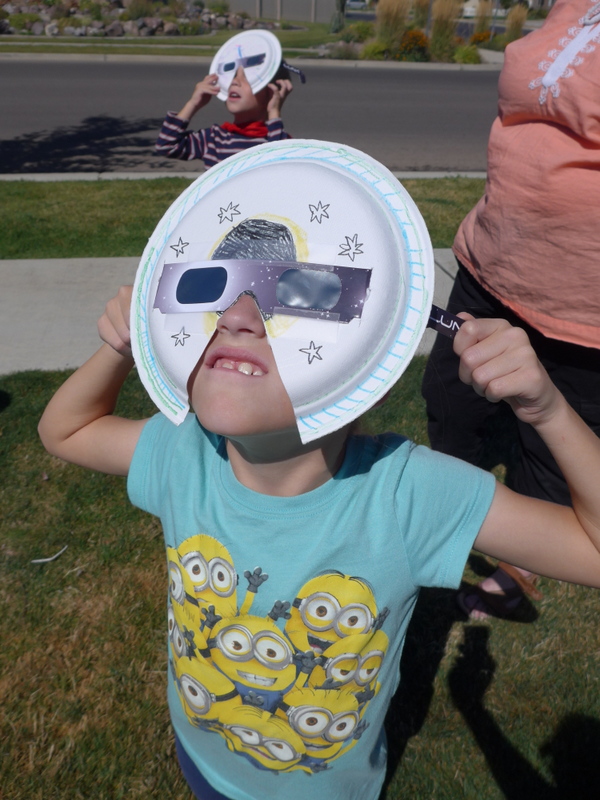 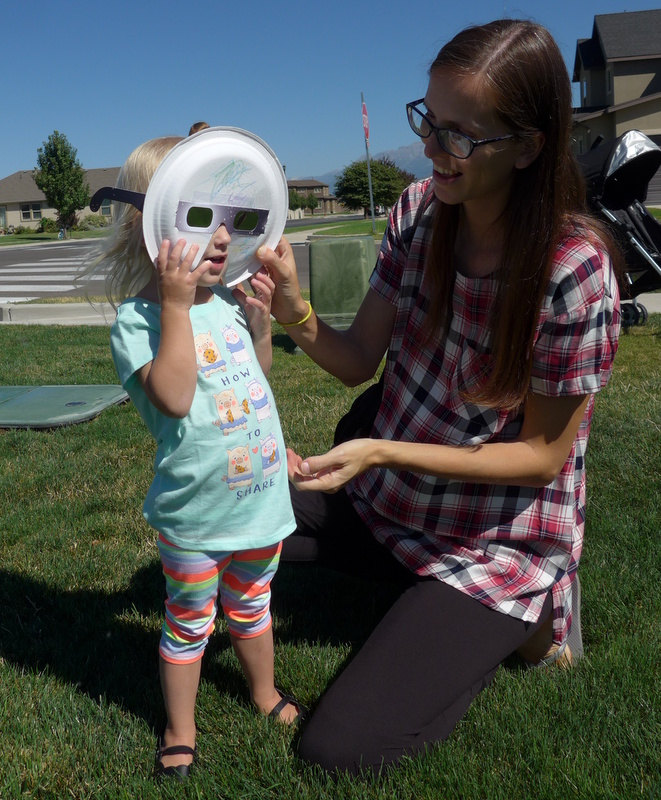 Zoë wasn't ever quite sure where to look so she kept saying, "I [can't] see! Dark! Dark!" while shaking her head. That's why all the fuss about "keep your kids inside or they'll go blind!" was quizzical to me—kids don't ordinarily look at the sun when they play outside. Zoë hates when the sun shines in her eyes and she wasn't remotely interested in looking at the sun today. 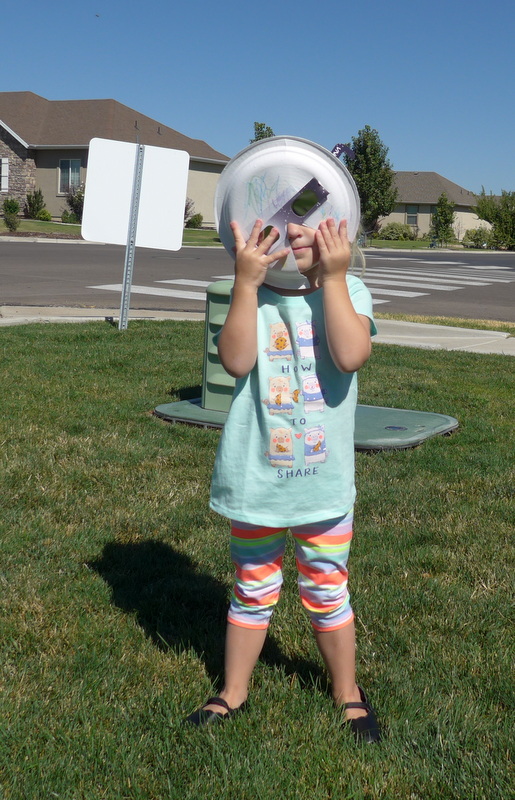 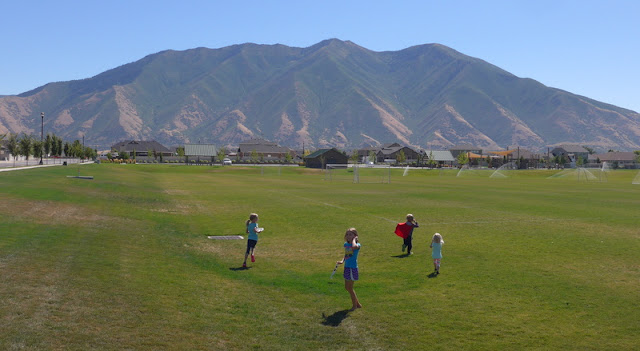 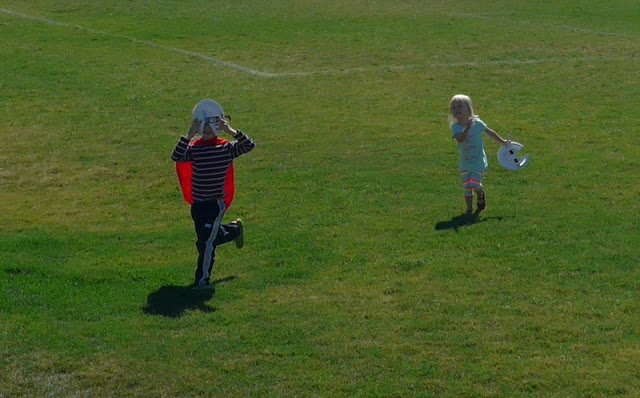 And when she was finished holding her glasses she'd go up to someone (anyone) and hit them with them saying, "Here! Here!" 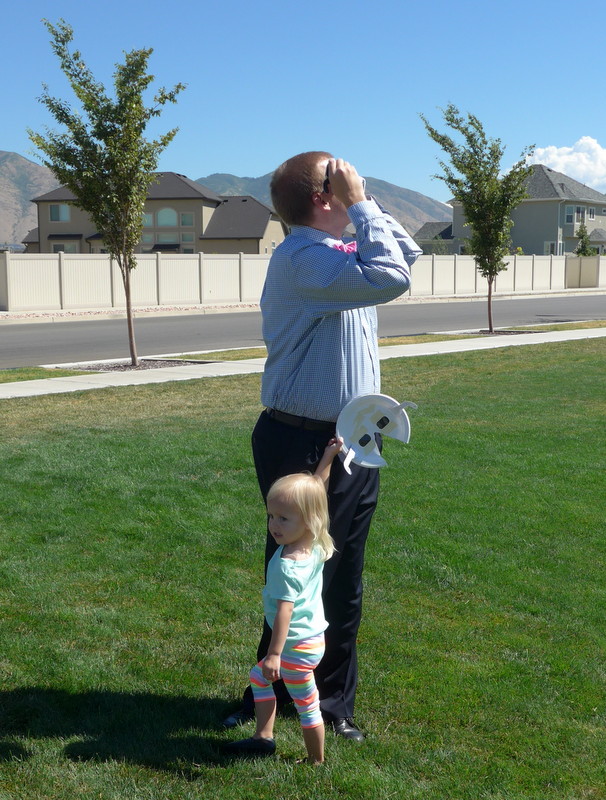 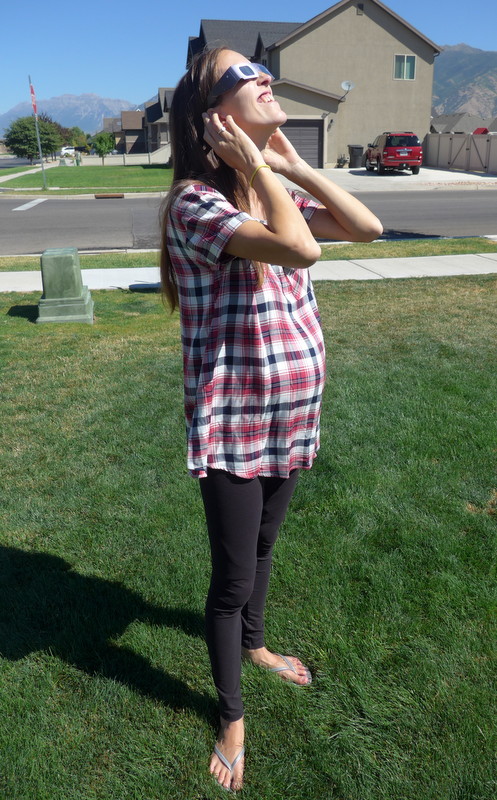 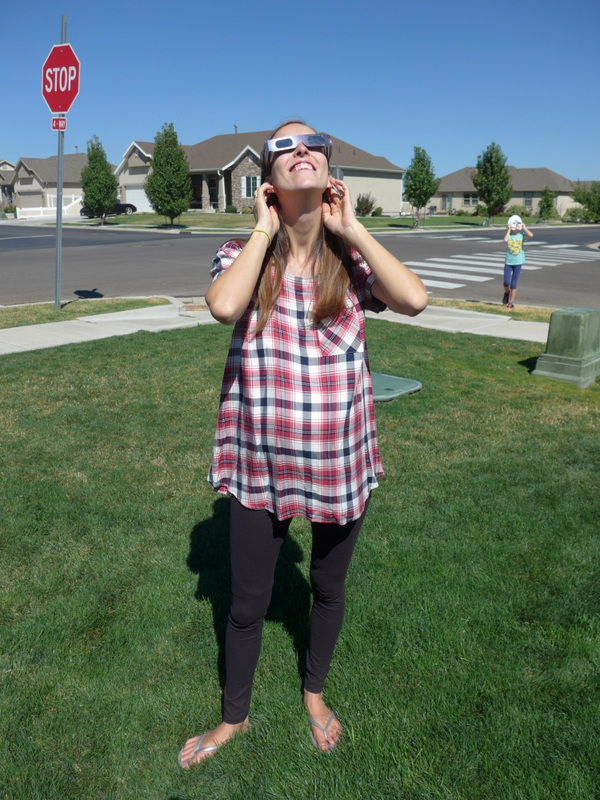 It was fun to watch the shadows filtering through the tree leaves:

All the little gaps of light were crescent-shaped: 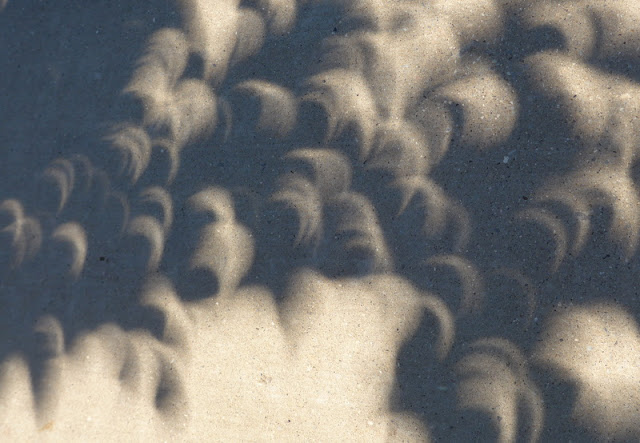 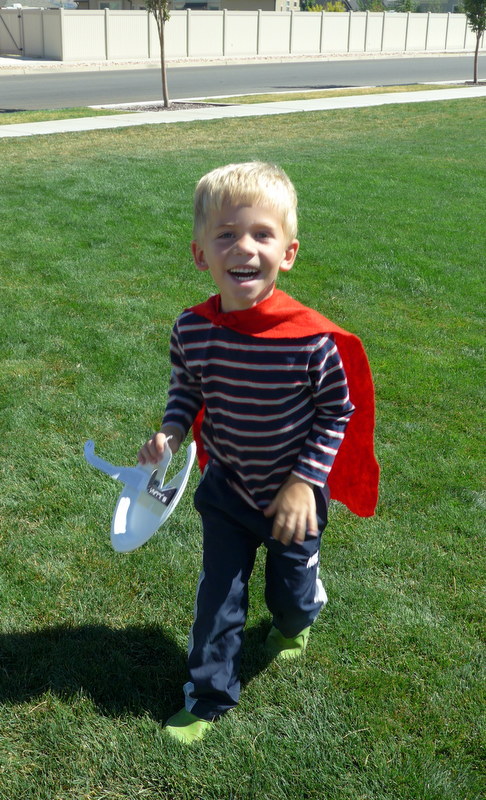 He discovered that his glasses/plate combo doubled as a frisbee (and then all the kids had fun tossing the plates around). 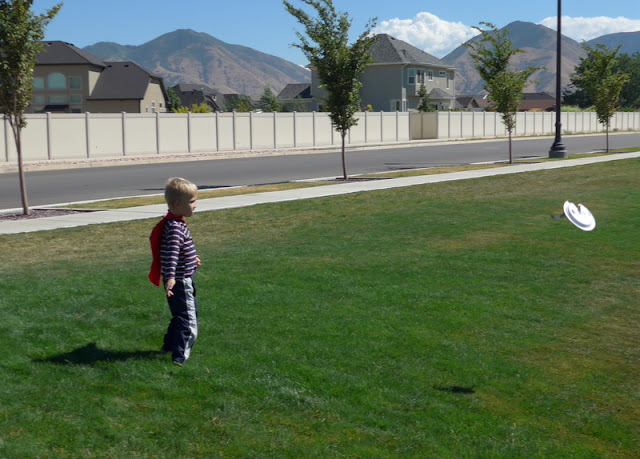 Here are Benjamin and Zoë playing in the field with the eclipse above them and the "baby rain" (sprinklers) behind them: 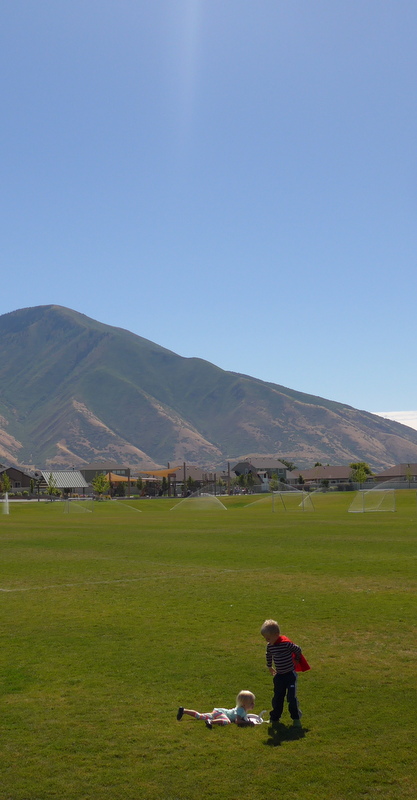 When Benjamin got tired of his cape and wanted it off, Zoë ran up and said, "Yeah! Yeah! You off! Me on! Me on!" So we put the cape on her and she happily zoomed around in her new persona I-Dunno-What-Everyone-Is-So-Excited-About-But-WAHOO Girl: 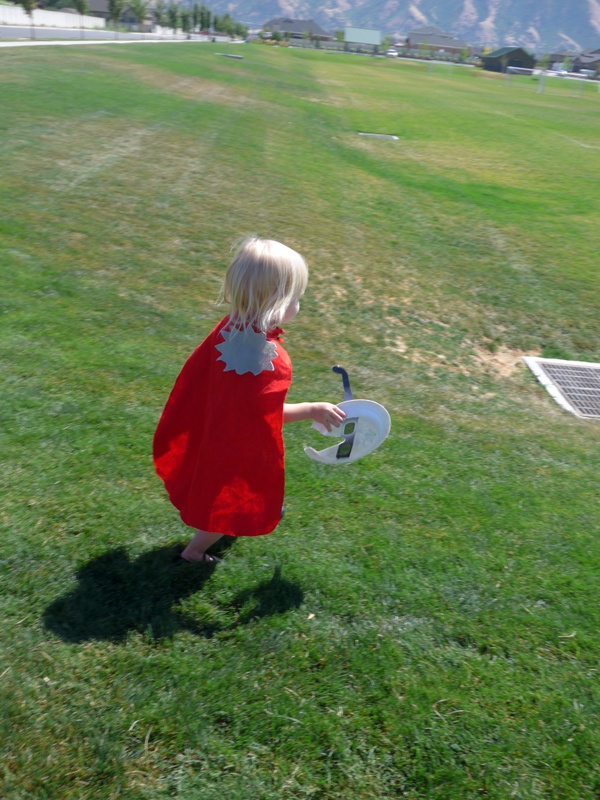 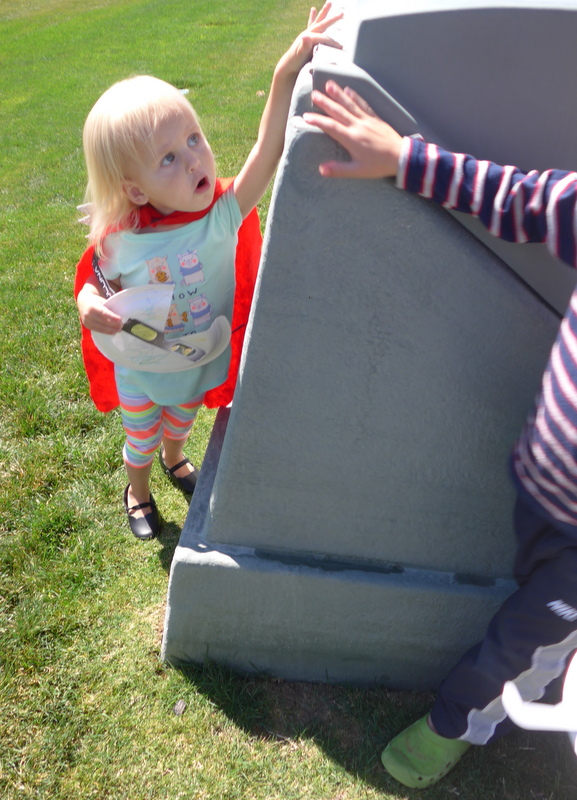 Even with only 90% totality, we definitely felt a change in temperature and there was a somewhat dramatic change in lighting. 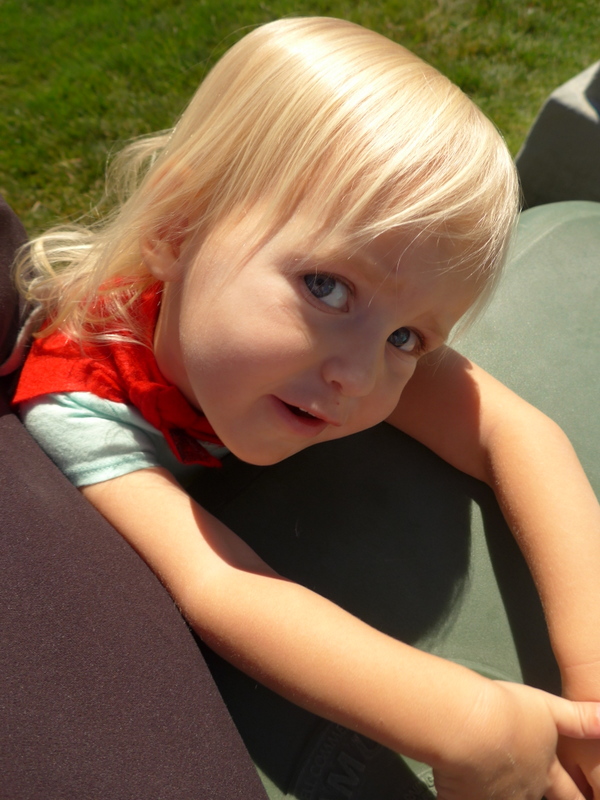 It was amazing, though, that even with the sun so obscured by the moon, it remained quite light outside (again, totality would have been much different—we've been enjoying the pictures of sunset in the middle of the day from our friends in the zone of totality).

Here are the kids all watching together: 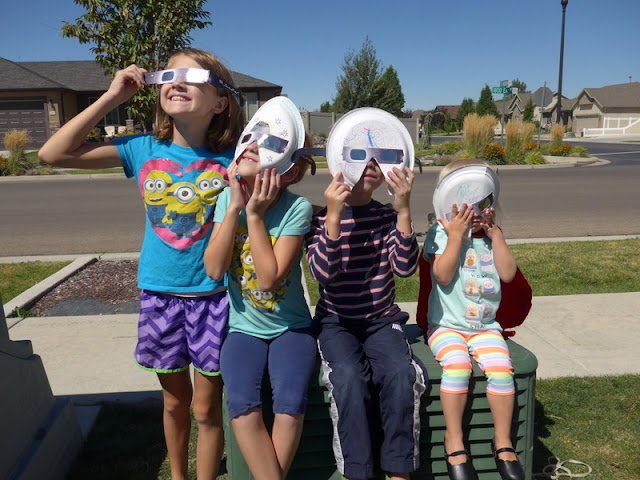 And here's a picture of our family that Grandma took for us: 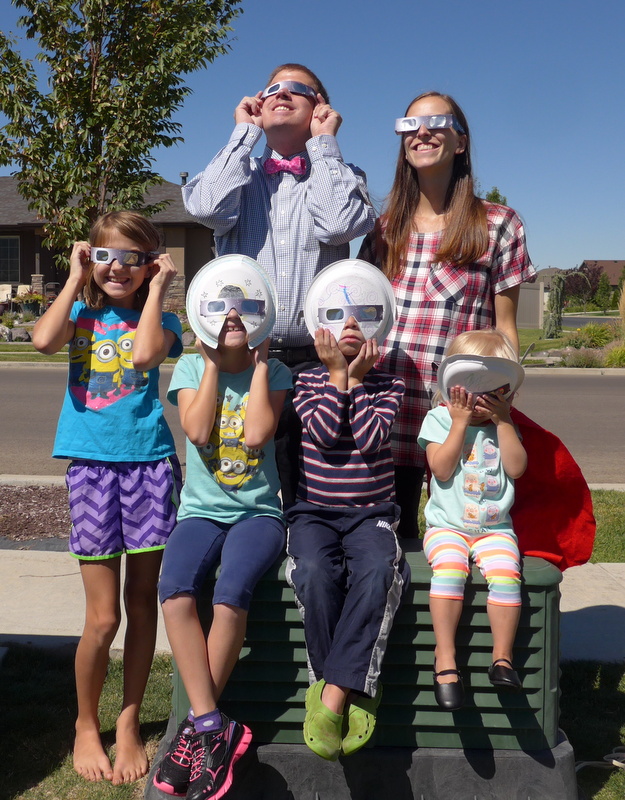 After we'd experienced the bulk of the eclipse, Grandma, Grandpa, and Daddy left for work/home and I took the kids to the park to play for a little bit before lunch. Here's Benjamin throwing some 'tude on our way home: 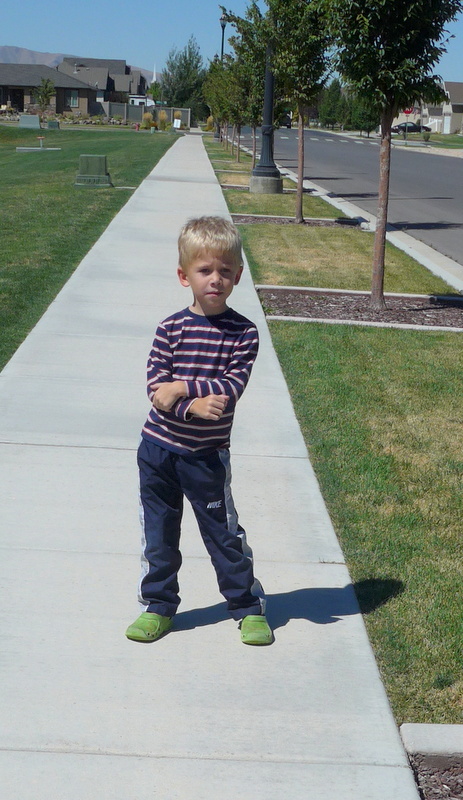 It was (hopefully) a memorable morning for the kids, whether they grasped the concept of an eclipse or not. This morning Andrew asked the kids what an eclipse was and Benjamin was the first to pipe up, "It's the day before school starts!" Though Rachel and Miriam weren't quite as naive about what, exactly, and eclipse is, Andrew gave the older three a mini-lesson on eclipses while Zoë and I had breakfast so the three older kids at least kind of understood what was going on!

* Andrew and I may or may not have had a disagreement (while watching the eclipse this morning) about which event happened when but, uh, I was right (sorry, honey).
Posted by Nancy at 7:40 PM