Sleeping Babies and the Bean Museum

This evening my mom texted me to say that my sister told her about a reptile exhibit at the Bean Museum on campus that Benjamin would probably like, which reminded me that I totally (sporatically) took them there already. I just hadn't blogged about it yet because for whatever reason I'm behind on most—if not all—facets of my life.

I seriously feel like I'm running after a bus that I've missed.

Fun fact: I have run after busses that I've missed. Often, when I lived in Voronezh, I was able to actually catch up to the bus on the next stop when I did this. Not that I did it terribly often. But there were those mornings, you know, where you just miss the bus and rather than risk waiting for the next bus you book it to the next and just barely make it on. Except in my life, currently, I never barely make the bus. I just keep chasing it stop after stop after stop.

I would blame it on the baby, but, honestly, he's one of those ridiculously easy babies (for now (please, please don't let saying that out loud jinx things)).

One piece of advice that stuck out in my mind tonight was that to teach a baby to sleep you just put them down when they're drowsy so they get used to going to sleep on their own.

For about the past decade of my life (aside from Miriam, whose love of sleep has always seemed more like the exception than the rule to me) I have been convinced that there's no way that could possibly be a thing.

But guess what: it's a thing.


It's actually possible to put a baby down, walk away, and do nothing special and they just...go to sleep.

I know because that's what I've been doing with Alexander.

Andrew gives him his nightly dose of reflux medicine (it's how they bond, maybe...but if Alexander ends up not liking Andrew we can probably blame it on not bonding properly because Alexander hates medicine time), I feed him, swaddle him, put him in his bassinet, and...walk away.

He squirms around for a few minutes and then he just...falls asleep.

I always feel a little guilty walking away—anxious, almost. Like I'm just waiting for him to start screaming nonstop for the next three to ten hours (zero exaggeration there; screaming was a nightly ritual of Zoë's (she would sometimes scream all night long until it was time to get the kids ready for school, no joke) and I seriously think I have PTSD from it because every time I put Alexander down my heart starts pounding and I involuntarily hold my breath as I tiptoe away).

But Alexander doesn't do that. Or at least he hasn't done that yet. Instead he actually sleeps.

It feels magical. And impossible. And I don't really understand it because I was pretty well convinced that sleeping babies was not a thing.

But they are a thing. And I'm so glad they're a thing. But for whatever reason, I'm still running around like a chicken with its head cut off. Maybe it's the whole five-kids thing? I dunno.

Anyway, I took the kids to the museum at the end of December after Alexander's appointment with the ENT. I had taken them all to BYU and then Andrew took the four older kids to the library while I went to Alexander's appointment because I didn't really feel like taking five kids to the doctor by myself. When I had all five kids with me again, I decided to stop by the museum because sometimes even when you feel like Crazy-Stress-Case Mom you have to put on your Fun Mom hat.

The kids were pretty excited to see all the animals and Zoë and Ben dashed off right away. I hadn't brought a baby carrier with me so I buckled Alexander into the stroller. Zoë has this magical sensor in her body, however, that tells her when someone is doing something or has something that she should rightfully do/have. So obviously the minute I finished buckling Alexander in, Zoë slammed on the breaks, mid-sprint to the elephant exhibit, wheeled around and screeched, "NO, MY SEAT!"

She ran back to me (screaming the whole way) and started yanking on the seatbelt straps and yanking on her brother and throwing a huge fit.

Zoë rode in the stroller nearly the entire time we were there. Not only that, but she wouldn't even let me put the seat back upright. She insisted that she be allowed to lie down in the stroller like Alexander had been. She's a gem. Oh, and Mommy had to push the stroller. If anyone so much as touched it (perhaps even thought about touching it), she'd squawk. She doesn't even have to be looking to know. It's seriously some sort of (terrible) innate gift of hers.

I often push her in the stroller while I have Alexander in the baby wrap. But, as I mentioned, I didn't have a baby wrap with me. What's a girl to do?

Hand the baby off to her ten-year-old, that's what (because this girl happens to have a ten-year-old; it's fine). 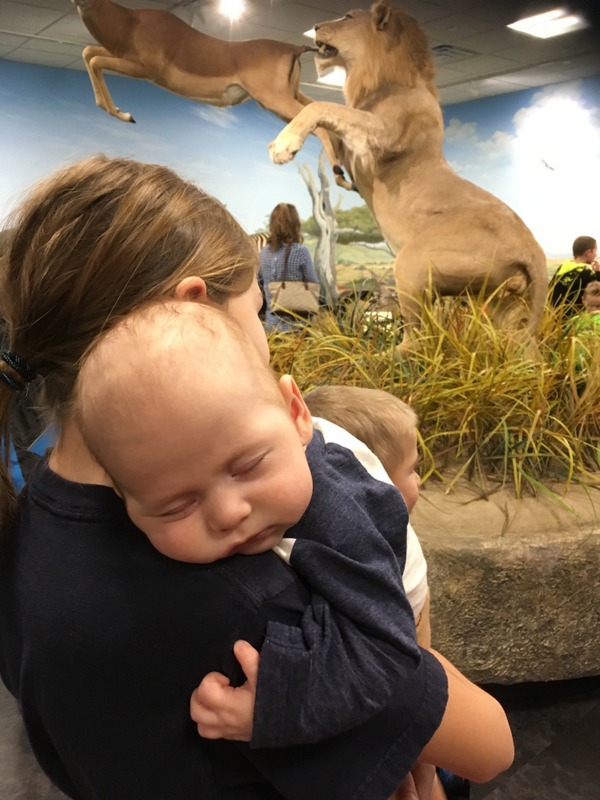 Rachel carried Alexander around the entire time we were at the museum (and, yes, he slept the whole time because he likes doing that...weird, right?). 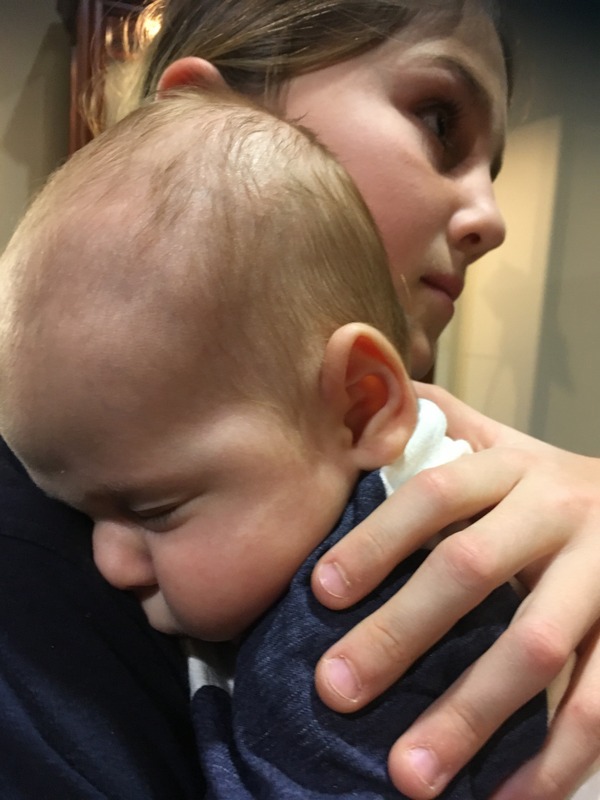 I have to admit that having older children is downright handy at times, even if keeping all five of them (and their schedules and their shoes) straight is slowly killing me.

We walked around the whole bottom floor and then the kids wanted to go up to the second floor, so I had to find the elevator, which I could not do. Benjamin really wanted to take the stairs so I walked with him and Miriam to the stairs and told them I'd meet them at the top—Rachel and I were going to use the elevator with the babies. So those two took off and the rest of us turned around to get in the elevator but, guess what! There's no elevator by the stairs.

It's all the way on the other side of the museum.

I know that because I asked the nice girl at the desk who said, pointing, "Oh, it's right over there. But you'll have to walk all the way back to this side of the museum to see the snake once you're up there."

I thought of asking, "What snake?" but thought better of it when I realized that Benjamin and Miriam were no where to be seen so I had probably catch up with them. I'd feel 100% comfortable allowing Miriam to explore the museum on her own for a few minutes, but I felt 100% uncomfortable about it with Benjamin in the picture.

Not that he's an awful child. He's not.

So Rachel and I raced to the elevator (it's ginormous, by the way) and spilled out on the second floor, which happens to be in a lovely loop configuration, which might've meant endless circles of chasing children, had I been on my own. But I wasn't on my own. I had a handy big kid with me.

We had the kids rounded up in no time and then together decided we'd better check out the snake exhibit, which was fairly obvious—it was taking up half the floor! It's on loan from the Smithsonian, I think, and was all about the Titanoboa, an impressively huge prehistoric snake.

Here are the kids at the photo-op: 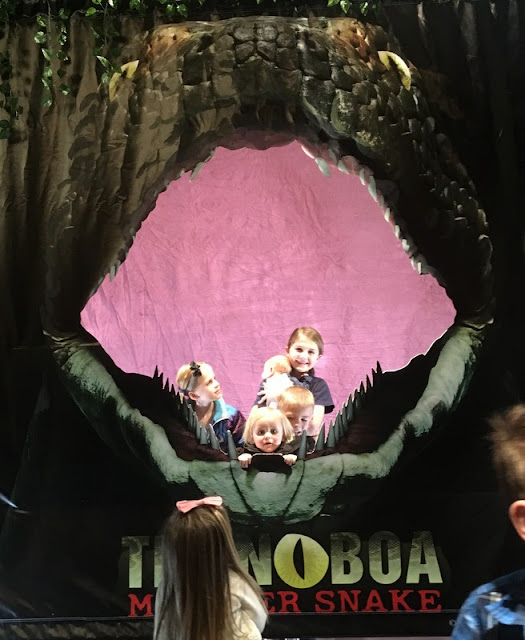 I realize half of them aren't looking and there's a little girl in the way...but Zoë's face is priceless. She wasn't going to stick around for another picture, however. She had to hop back in her stroller throne before someone else took it from her, duh. So here's a picture of the other kids looking at the camera. 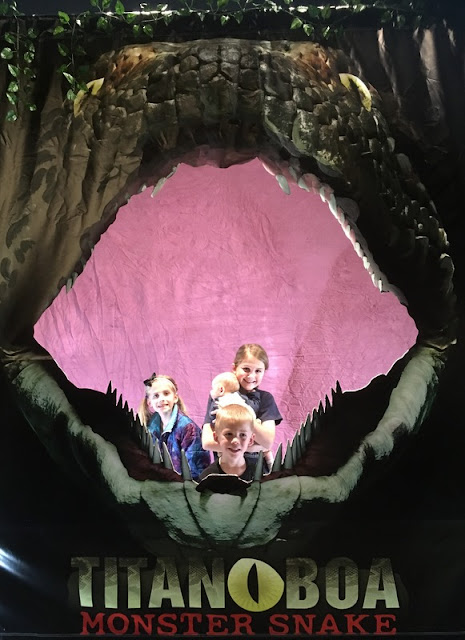 We had a pretty good time, but I'm sure the kids (and I) would enjoy another trip to the museum with a few more adult helpers so that kids can linger or wander at will and be pushed and be carried, fed, watered, and paid attention to without me feeling like I'm being pulled in a million directions all at once (sometimes five feels like a million, trust me).


Here is a random picture of my Miriam and Benjamin with a moose statue (because they wanted one):